To say the name “Chavela Vargas” is to conjure an image of transgression. Here was a ranchera singer who said no to earrings, no to frilly dresses, no to braids and shawls, no to hoops and to any kind of jewellery. Where her contemporaries relied on coy flirtatious performances to sell their image, Vargas went in the opposite direction. With her slicked-back hair, her penchant for pants, and her signature red poncho, she was unlike anyone else aroundand that was back in the 1950s!

As she became one of the leading figures of the Mexican ranchera, giving soulful renditions of songs about heartbreak, Vargas continued to play by her own rules, bucking trends in the process and becoming, not coincidentally, a queer icon in her own right. For those unaware of Vargas’ vast discography and her indelible impact on Mexican music, a new documentary by Catherine Gund and Daresha Kyi gives audiences a primer on the one of a kind diva.

Simply titled Chavela, the film traces how the Costa Rican-born artist made her way to Mexico where she went from singing on the streets to performing in some of the most distinguished venues around the world. And while plenty of time is spent on talking about her unparalleled talentno one could drive you to tears with a few bars quite like Chavelathe documentary serves as a reminder that Vargas was a queer icon before we even had words to describe her as such.

For much of her decades-spanning career, Vargas’ sexual fluidity was very much an open secret. Given that her style could always have been described as butch and her demeanor had always tested the gender normativity of the music industry, this may not come as quite a surprise.

Nevertheless, hearing her talk about how she was first struck by Frida Kahlo when she first met her (the two are rumored to have had an affair) and later talking about how one night she woke up next to Ava Gardner after a fabulous night of partying at Liz Taylor’s wedding no less, helps put into context the magnetic force that Vargas could evoke on and off the stage.

Late in life, including in many of the interviews that make up the bulk of Gund and Kyi’s film, the songstress became more candid about her same-sex relationships. Her partner of many years, Alicia Pérez Duarte, speaks openly about the life they lived together. There’s affection in her reminisces even as Vargas’ increasing alcoholism eventually took a toll on their relationship. This was a by-product of the music industry at the time for there was no room for a woman (read: a lesbian) like Vargas at the time. 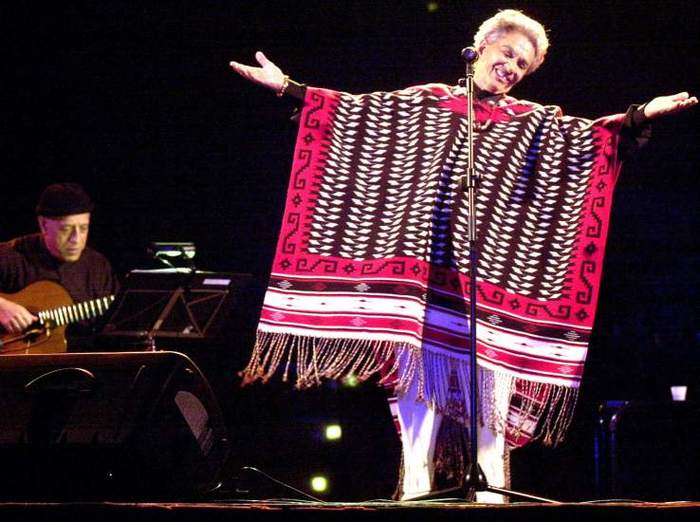 As Pérez Duarte explains in the film, “To become ‘Chavela,’ she had to be stronger, more macha and more drunk than any other singing cowboy around”it was her way of surviving. This left her with at times competing notions of gender conformity. Among the many anecdotes Pérez Duarte shares, one stands out for the way it reveals the ingrained gender normativity that Chavela defied yet could not escape.

She remembers how she once had to stop Vargas from teaching her son from her previous marriage how to shoot a gun lest he not grow up to be a real man. She didn’t want her de facto stepson to grow up to be a “joto” (a faggot). Partly, one has to imagine, because she’d seen firsthand how those who flaunt their difference were treated; how much pain and shame she herself had suffered through. But also, how deep-rooted the kind of misogyny and homophobia she’d grown around was.

That is, perhaps, what made her vocals so arresting.

As Mexican singer Eugenia León puts it elsewhere in the film, Vargas stripped Mexican music of all its happiness “and synthesized it into what it’s really about: it’s the music of desperation.” She got rid of all of the embellishments that usually accompanied such songs and turned them instead into music of the soulthe “wounded soul.”

Vargas wasn’t merely a broken woman, but she could evoke and elicit that woundedness when she took the stage. And while you’d think that’d make her a hopeless romantic, she comes across in those late interviews in the film as an earnest kind of skeptic. She didn’t have time for corny notions of an enduring romantic partner, though she relished the ways she seduced and fell in love with endless women in her life. “We all have to live in the present,” she says at one point in the film when asked whether she believes in eternal love, “Don’t think about yesterday or tomorrow: Today.”

By focusing on pain, a feeling all but rooted in the present, Vargas was able to speak to those in the audience whose lives had always been in pain, and not just the heartbreaking kind. Who, like her, sought ways to scream in agony and hope someone would, if not comfort, at least acknowledge them.

One such fan, who discovered her in his youth in Spain, long after she’d retreated from the spotlight back in Mexico, was film director Pedro Almodóvar. A champion of her artistry, he was chosen to introduce her in Spain, at a performance that would revive her career and welcome her to a new generation.

In footage that we see in Gund and Kyi’s film, Almodóvar admits that Vargas’ voice had made him cry many times. It’s why she’d become one of his best collaborators. The Spanish auteur has used her work in his films many times, harnessing that voice to color the outsized emotions that characterize his pop-colored films.

After featuring her songs in Kika, La flor de mi secreto, and Carne trémula, he made use of her haunting rendition of “Si no te vas” to close out his latest film, Julieta, letting her voice be the concluding lines to that mother-daughter melodrama: “Si no te vas, te voy a dar mi vida, si no te vas, vas a saber quien soy” (“If you don’t go, I’ll give you my life; if you don’t go, you’ll know who I really am”).

Almodóvar doesn’t quite come out and say it in so many words, but it’s clear he thinks there’s a queer sensibility to Vargas’ music. For there is strength in her voice, one that reminds you that there’s dignity and hope in wallowing in your pain. What better metaphor for the plight of members of the LGBTQ community growing up in decidedly macho and homophobic societies?

Almodóvar puts it quite simply: “I found a faithful reflection of myself” in her vulnerable yet resilient voice, echoing yet never subsumed by its pain.