Amongst the sea of never-ending rainbows shone an unlikely star: a twelve-year-old boy with multi-colored hair, a cheeky grin, and confident posture.

With one arm holding a banner that was about to go viral, and the other placed sassily on his hip, Max Townes in his teapot pose was also about to capture the hearts of a nation holding its breath.

The scene was Australia’s biggest ever rally for same-sex marriage, back in September. In sunny Sydney 30,000 equality supporters festooned, decorated, and determined, marched from Town Hall to the Sydney Opera House as news helicopters noisily circled them. Max had come along with his mum and older siblings.

This wasn’t gay pride or Mardi Gras; it was a quickly organized rally to galvanize Australians to vote YES in a national postal survey on whether marriage equality should be enacted.

Rainbows were ubiquitous, outfits were outrageous, attitudes were defiant – and each banner tried to outdo the next with wry witticisms about how long it was taking this supposedly progressive country to achieve basic equality. But it was Max’s hilarious message for the man of his dreams that caught everyone’s eye:

“All I want is the right to marry Chris Hemsworth,” the sign spelled out with a cartoon waving. “You’ve got five years until I’m 18 Australia! You too Chris!” 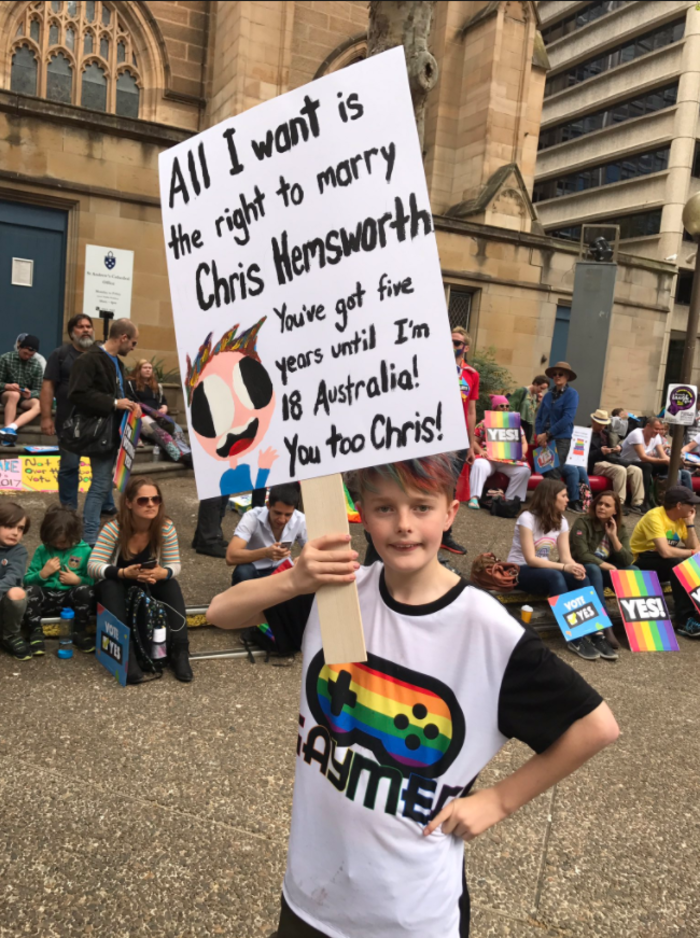 As if winning the best banner wasn’t enough, Max’s t-shirt also took some beating, proclaiming him to be a ‘Gaymer’ a portmanteau for a gay guy who loves gaming.

Max who actually turns 13 in two weeks’ time adored the attention: “When the first news articles came out, I was like, ‘Woah! That’s cool!’ Because I’d never been interviewed before. Then I was at school, and at one point I had at least three different people say, ‘Hey! I saw you on TV!’ That was amazing.”

On coming out to his schoolmates earlier this year, Max said: “I actually came out on my friend’s 13th birthday, so that was a wild ride. I didn’t actually know it was his birthday, and I just said, ‘Hey I think I might be… I probably will be well, I think I am gay.’ And he said, ‘Woah it’s my birthday, this is amazing, is it my birthday gift?’”

Not everyone was as supportive as his close friends “who don’t ask 50 questions a day because they’re good people.” Two students challenged him: “They kept saying, ‘You’re not gay. You’re doing it for attention – we know because you dyed your hair!’ To which I said, ‘Please go away!’ And then I just walked away and laughed!” 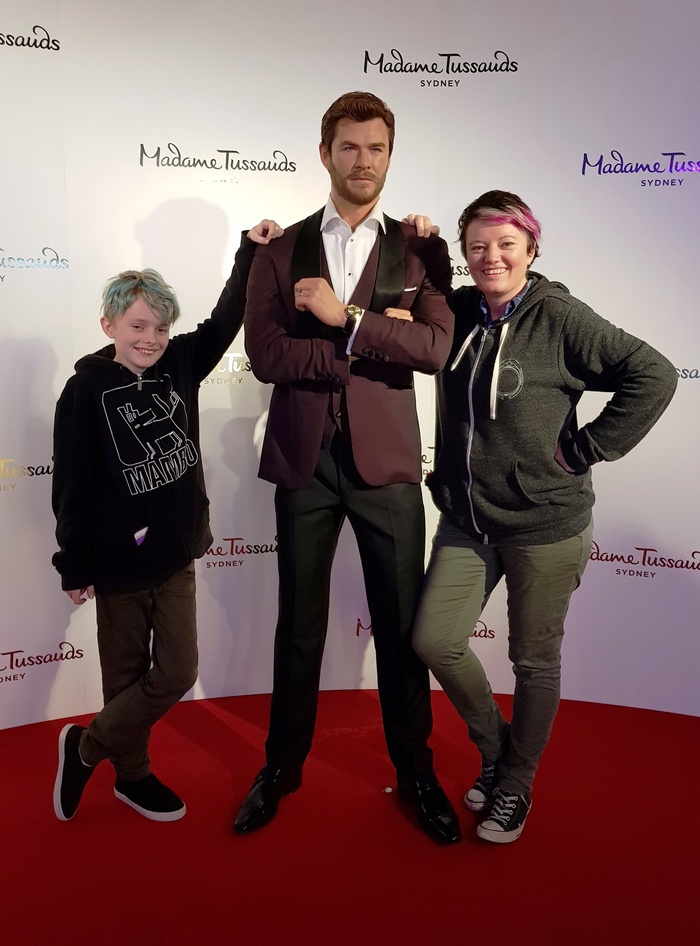 Max’s mum Megan Townes, 39, was immediately supportive when he came out: “I said there’s nothing you could ever say that’d make me hate you. And when he said he was gay, I said that was totally fine – I’d hope from his perspective it was non-eventful.” Max expresses warm affirmation in the background. Has he changed much since the revelation? “It’s added a layer of confidence to his already-confident personality. He’s now 100% himself. And the school has been awesome – they even have a gay club that meets on Wednesdays.”

Max didn’t just catch the eye of news journalists. Madame Tussauds Sydney surprised him with a “meet and greet” of his celebrity crush. They got his mum to blindfold him and then unveiled the world-first wax figure of Chris Hemsworth. A “gobsmacked” Max – the very first visitor to see it – hasn’t stopped smiling since: “He’s so tall! And I love his stubbled beard. Every time I see a bearded character on TV, whether they’re good or bad, I’m like no please come back!”

With Max being so young, a backlash of below-the-line comments on articles has been the only downside of his moment in the spotlight. But it seems to have affected others far more than him. Megan said: “Certain assumptions were made about what we may or may not have been ‘forcing’ on him. My husband (Max’s dad) and best friend had to stop reading them, but Max was actually laughing at them. It made me feel better. He’s such a resilient kid.”

Max’s response to the online hate gives a clear indication of why Australia has fallen for him just as much as he has fallen for Mr. Hemsworth: “I didn’t really care because they don’t know me. I haven’t had a conversation with them. They wouldn’t say to my face, ‘you’re what’s wrong with the world, get in a cage, goodbye, I’ll send you away!’ If you’re insulting a child you don’t personally know, how much time do you have on your hands? Get a better day job. Half of them I just find funny because their English is so bad!”

And what’s his message to the government who’ve made the country vote by post as to whether he could ever marry someone like Chris Hemsworth? “They got elected to be in that power yet they seem to not be able to make a simple decision themselves. They’re so under pressure, so they just go, let other people decide, which makes no sense.”

I don’t want to stop talking to this beautiful family, who fill me with optimism. But it’s time to go, as we count down together to Wednesday’s YES or NO postal ballot outcome, which a staggering eight in ten Australians have voted in.

Before I do, I ask Megan – who wore a t-shirt to the rally saying ‘This mother wants equality!’ – how she’ll feel if the vote result is a Yes or a No on Wednesday: “I’ve tried not to think about it but I want to stay at home with my family and celebrate if it’s a Yes. If it’s a No, that’ll be really sucky, but” with that, her voice cracks and she starts to cry. There’s a pause.

“Sorry, you can’t see what just happened,” she sobs over the phone. “Max just came up to me and has given me the biggest hug.”