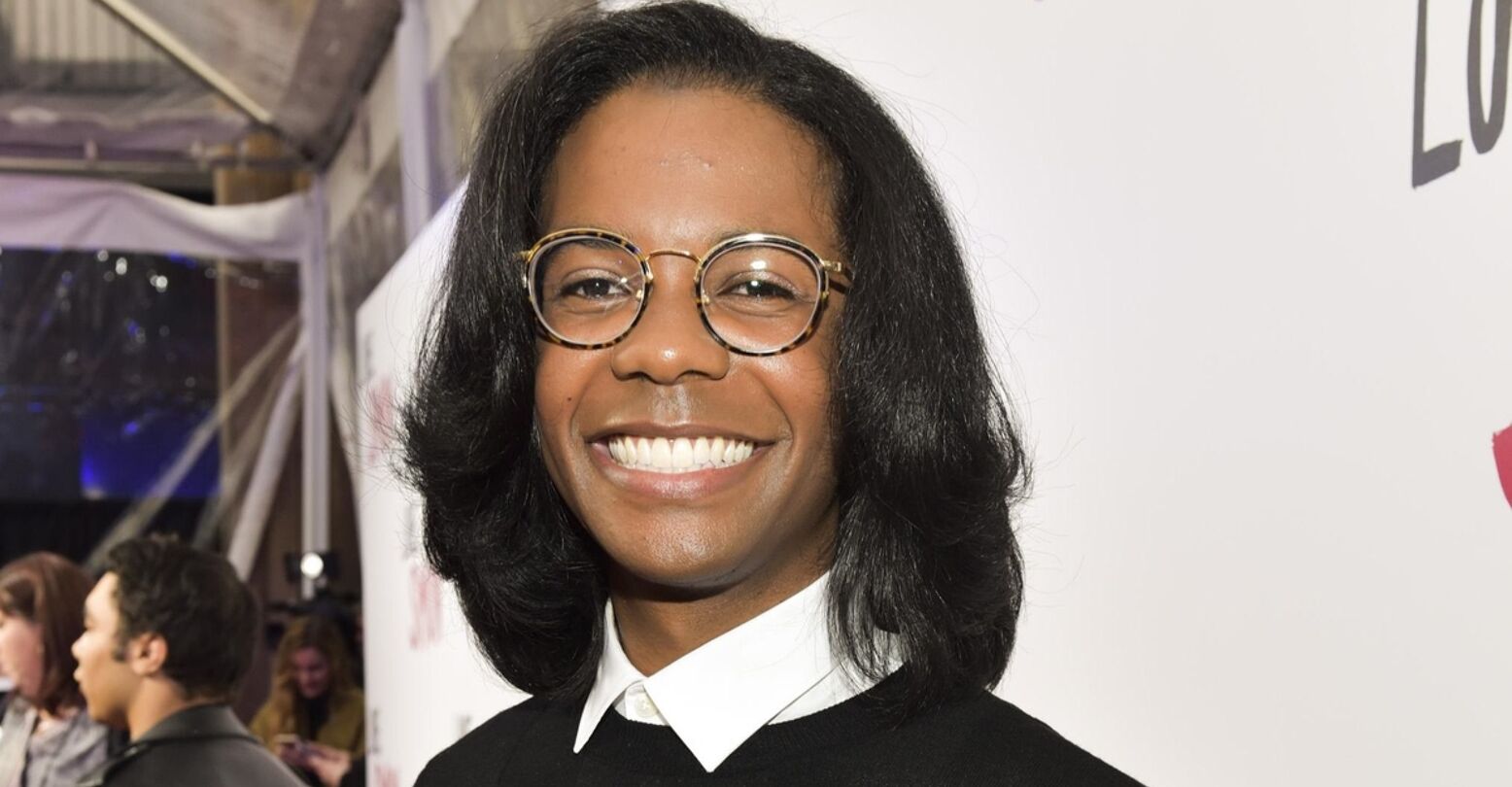 The new beloved teen film Love, Simon is winning over audiences with its gay coming out story and subsequent romance. It’s the first time a film of its kind has been released at this level. With its mainstream appeal, it’s providing a much needed coming-of-age format for young queer audiences.

But one role that stands out among this coming out story is that of Ethan, a classmate of the protagonist who’s already living his life as a proudly out gay teenager. His confidence makes for an uplifting message, as he shows no concern for his adolescent bullies and naysayers. It rings true for a new generation of liberated queer youths who’ve found the unwavering courage to live their lives fully and truthfully without the typical high school quandaries.

The young actor behind the role is Clark Moore, a positive personality that parallels Ethan’s. Having appeared in The Sing-Off and Glee, Love, Simon marks his first big role. We recently caught up with the actor to discuss the groundbreaking film and what it means to be part of it.

What was it like working on this big budget major motion picture that happened to have a gay teen plot?

It was a dream come true, honestly. It’s like when you think about what you want your first big project to be or you’re envisioning all the ways you want your dream to come together, I never would have thought that a groundbreaking film like Love, Simon would have been that first big project. As far as I know, there’s been no film like this, at this level, out there of its kind. This is the movie I wish I had growing up. This is the movie that 13, 14, 15-year-old Clark who was confused and felt alone needed to see, because I think it’s so sad that we all go through this, sort of in our own echo chambers, and then we come out into the world, both literally and figuratively. We sort of realize we all went through this together. Why do we have to be alone? So, it was a dream come true.

Growing up, what was that one movie you could see yourself in?

That’s a really good question. Of course, I remember there was Brokeback Mountain. I remember that was the first time any kind of gay story was told to a mainstream audience. And I remember a lot of films that were not gay related but once I told people I liked them, they’re like, “Oh right, you’re gay.” (LAUGHS) Like Legally Blonde or Devil Wears Prada or Mean Girls, all those kinds of movies, the gay classics. A lot of which had gay characters or characters that were implied to be gay. A lot of times when the character was gay, like in Sweet Home Alabama for example, there’s the gay black character who comes from New York to this small town in Alabama. It turns out one of the guys we’ve known all along is also gay, but the out gay guy was such a stereotype, and they don’t speak explicitly about him being gay. I just go back to all these movies I watched when I was younger, and all these characters I identified with but didn’t know why, but now I realize it’s because they were gay and no one was calling them that. It’s just a wink to the audience or whatever.

Your character is already out in this movie and he seems unfazed by his bullies. Is that kind of confidence something you could relate to growing up?

Oh god no. I mean, I was definitely confident growing up, and I was just really lucky that I got to go to this prep school in Atlanta that was like hippy-dippy, no dress code, call teachers by their first names. So, I always had a really supportive school life and a really supportive home life. So, those things were similar, I guess. But Ethan is far more quick-witted than I, better dressed, smarter. He’s pretty much who I wish I was in high school. So, that’s why it was such a joy to play him. I think that’s what I love so much about getting to revisit these high school storylines, is that I know how it all works out, like they say it gets better, I know how the story ends. Will people still love me? Will they hate me? Now I can go back and sort of laugh at the angst I was feeling at the time. But just like then, just like now, I was riddled with anxiety.

Feeling incredibly thankful for and proud of ✨Mama Asaka🍊🌿 @thealexnewell who brought the house down in all three of the performances I attended (for fear of being suffocated by him in my sleep) of @onceislandbway! Congratulations, you’re living your dream with such talent and grace and “impressed” doesn’t begin to explain how I feel. #onceonthisisland 📸: @ethanmarcweinberg

Hollywood is notorious for overlooking gay actors and actors of color. How does it feel to play a role that really embraces both of those things?

It further solidifies the point to me about change in the industry, which is that it’s got to come from the top. I, as a gay person of color, as an actor that has this very specific intersectional identity, am not going to be able to make these changes unilaterally. I’m arguably the person who has the least amount of control in these situations. The fact that Greg (Berlanti), our director, and all the other producers we had on this project, made a specific decision to have this character represent the intersectionality that gay black people feel about coming out, that’s what I think I’m most proud of in this project. When I was cast, I expected to be the one black dot in a sea of white people. When I got to set, that was not the case at all. I was not the token, I was not the only one. It was a very colorful room and very diverse in so many ways. I think it’s the perfect example of when people make a bold decision to present a plethora of experiences, it gives all of us opportunities.

The film also paints a picture of a much more progressive and utopic generation. Do you think that’s an accurate portrayal of what it’s like coming out today?

That’s a good question. I don’t know. What I think is funny is that my experience coming out was so blessed. I just had such a fantastic experience. Everyone I told was very supportive, and I was constantly reminded, “You are loved. You are loved. You are loved.” And even still, it was arguably the hardest thing I’ve ever had to do. I remember reading this article in Rolling Stone a couple years ago about how this kid came out to his roommate at Yale, and he built it up in his mind as being this big thing. And when he told his roommate, he was just like, “Cool.” There’s just this apathy that’s settled in. While that’s obviously the ideal response, there’s still this sort of lack of feeling seen. It’s still one of the biggest and hardest things you’re ever going to have to do, so when it falls flat with the people you’re telling it to, it sort of leaves you without that closure that you need. So, I hope that all of the kids that are going through this now are in a much friendlier world than when I was a student in high school. We all just want to be seen at the end of the day.

What’s it been like seeing the reactions from all these young queer audiences?

It’s been great. Everyone seems to be resonating with it in a really great way, which is nice. I’ve also had the benefit with Instagram, you get to sort of see things that people might not even be aware that you’re seeing. There are all these fan accounts that have popped up around the film. All these people who were huge supporters of the book, it’s really nice to see them get excited about these characters coming to life. It’s been amazing. It’s really been a privilege to watch.

What was it like working with the rest of the cast and having Greg Berlanti as a director?

You never know what you’re getting into when you show up on the first day, but we got so lucky that we had Nick as our number one, because he was so calm and centered and just has this open heart. He is such a positive source of light and energy, so that really permeated throughout the rest of the cast and the crew as well. It was like going to summer camp. Every day I got to show up on set, I was so excited.

I also saw that you were in Keiynan Lonsdale’s video for “Good Life.” How did that come about?

We met on set, and I had always been a huge fan of his, because I love The Flash and the show he was on before that, Dance Academy. I had always been a huge fan of his, so when I met him on set, he was so nice and sweet and funny. So, we kept in touch and randomly messaged back and forth a little bit. And one day, he was like, “Are you free this day? Come be in my music video.” So, we spent a couple hours on a golf course in Van Nuys, and he put together an amazing video. It’s so colorful, and poppy, and spreading positive energy, which is what he’s all about.

You’re also a musician. Do you have any other music projects coming up?

I think for me, music is something that I’ve always loved in conjunction with acting. So, I sort of found myself onto The Sing-Off with my college acapella group almost as kind of a fluke. Live performance and sort of theatrical performance are something I’m just really passionate about. Long term, my aspirations are more towards theater or Broadway or West End in London, that kind of relationship with music. At the moment, I’m not doing any original stuff yet. It’s not a hustle that I’m ready to take on just yet, but it’s also not one I’m ruling out.

See Clark Moore as Ethan in Love, Simon, now in theaters. Watch the trailer below: