My one rule as I slowly age into an old crotchety gay that is attempting to reclaim her lost childhood like it’s my own version of Paradise Lost is simple:

Now. How effective am I at following that rule? Well, it varies. I’m generally less nosy, annoying, and prone to intervention than, say, a Susan. But of course, this time around intervention has been deemed required.

And why has intervention been deemed required this time around?

Everybody who has charged themselves with defending James Gunn has quite frankly lost their goddamn minds.

And are definitely doing the opposite of minding their business.

How did we get here? I’m not sure, and I definitely didn’t want to be writing my own James Gunn anti-thinkpiece thinkpiece but alas. We can’t always get what we want. The journey here was blurry, but it all has to do with White men assuming it’s their right to say shitty things.

To bring you up to speed: Early in July, incendiary tweets that made light of pedophilia and child abuse (and belonged to James Gunn) were brought to light. Now, some will deem it important to mention who brought it to light — that is, Mike Cernovich — but I will soon explain why I do not give a fuck.

The tweets made light of pedophilia and sexual assault as it concerns children and minors. And all of them were pretty trifling, and I wouldn’t recommend Googling them, but just so you know, The Verge compiled them: 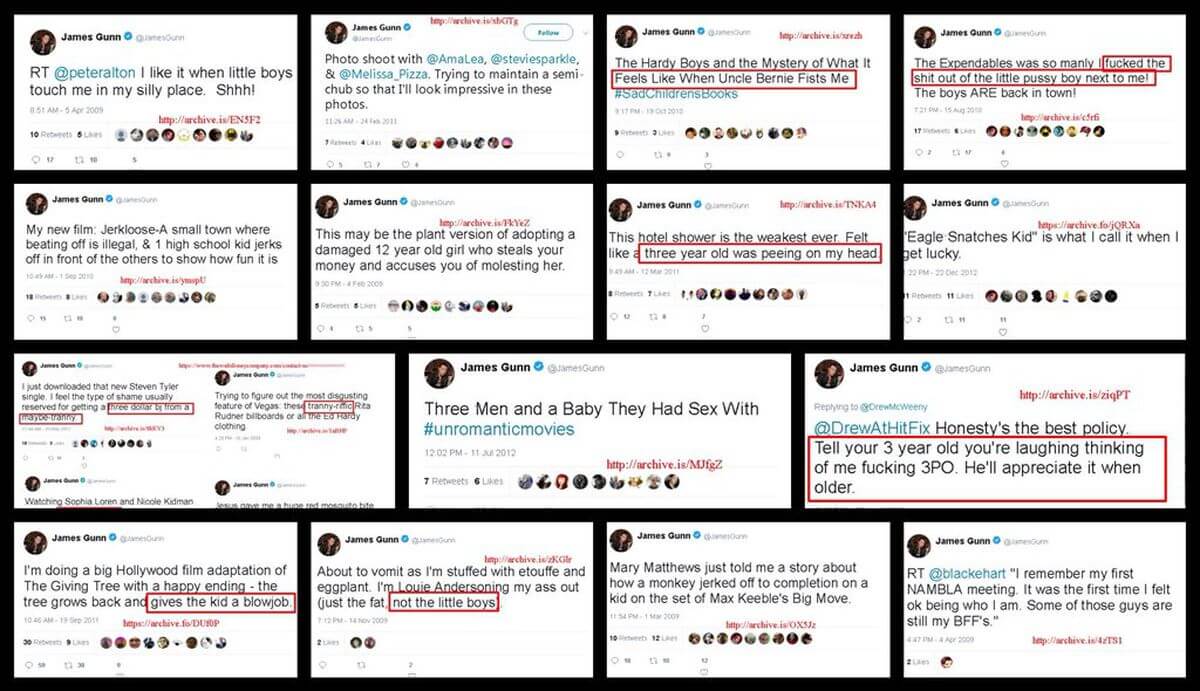 This caused Gunn to re-apologize (he had apparently apologized for them before, but did not delete them), stating that some semblance of his sense of humor was much better now (which I’ll get to) and attempting some semblance of damage control.

However, unlike before, there was no spinning this. The blowback was swift, widespread, and made Disney go “lol bye bitch” and drop James Gunn quicker than a Sundrop commercial on July 20.

Now. When I heard the news, I was pretty much shocked that Disney went there (and more than moderately tickled because these tweets did exist before and I’m sure Disney knew of them, but just didn’t care…then). However, I was interested in what the “liberal progressive” reaction would be. And was half expecting some reflection from Hollywood about how doing or even saying shitty things can come back to bite you at the most inopportune of times.

But LOL what a naïve asshole I was, because that is exactly the OPPOSITE of what happened.

Instead, you had folx who would normally have some common fucking sense (i.e. Selma Blair, Dave Bautista, etc.) ready to take the weirdest L I’ve watched in modern history for ol’ dude, saying that he had demonstrated a capacity for change (don’t know how one could measure that but okay — and the irony is that many of these same individuals would not be saying the same thing if they were asked to leave their children around him) and should not be punished.

Perhaps the most bizarre one for me was the assumption that because Mike Cernovich was a right-wing bum bitch himself, (also a supporter of rape, a White supremacist, and a Men’s Rights Activist who rose to prominence thanks to #GamerGate [how ironic]), his callout shouldn’t mean shit. Now, if it was merely about him also being a rape promoting, White supremacist shit-head who should have been put down during #GamerGate, I’d understand more, I would, but most people are taking umbrage with this not because of that reasoning but because this is apparently a case of “the right” weaponizing hate or political speech against people who speak out in opposition to Trump or whatever the fuck and getting someone they don’t like on the left out of the paint.

And obviously because Hollywood likes Gunn, this was madness to them.

The irony? This was madness, but for completely different reasons — two of which include the following:

It goes without saying that right-wing nutjobs are some of the worst of the worst, but to pretend that folx who are left-leaning or otherwise “progressive” cannot also be bigoted or downright awful is bullshit.

But this charade is not new. It’s the same reason folx are acting like the bombing of Black and Brown countries started under Bush or Trump and did not occur (and was not worsened) under Obama. And it’s the same reason people are acting like ICE (founded in 2003), deportation in general, the separation of families, and the disappearing of children is a Trumpian invention like ICE wasn’t created in response to 9/11 and xenophobia and anti-immigrant sentiments that existed PRIOR to that or like Obama didn’t tell a trans woman activist to basically STFU when she protested ICE’s inhuman treatment of trans detainees at the White House back in 2015.

There’s that and the fact that no political side has some unique subscription to callouts. Just like we just got Roseanne out of the paint for being a virulent right-wing racist, Gunn doesn’t suddenly get to be spared similar action because folx happen to like him more or because he’s dragged Trump and this administration enough times.

Folx are acting like it will cause the moral degradation of society to give credence to a right-winger pointing out the indecency of making pedophilia jokes rather than pointing out that the jokes shouldn’t have been made at all, so there is nothing to call out. Source of the callout aside.

And though we all learned to be wary of sources in grade school, a source’s political ties doesn’t suddenly change the truth if the truth is the truth. Case in point, The famous exposé done on Harvey Weinstein (one of many that would propel the #MeToo movement to national and international renown) by Ronan Farrow wouldn’t have suddenly meant less if (God forbid) it came from, Breitbart or Fox News. Of course, I say this knowing some of you shitheads might have rushed to defend [alleged] serial rapist and sexual assaulter Harvey Weinstein if that had been the case because he had just so happened to position himself as progressive and donated to plenty of Democratic campaigns during the height of his popularity and power.

Still. Left-leaning politics do not somehow erase your personal, professional, or moral shortcomings or give you a “get out of jail free” card when you do or say something shitty.

If it were that easy, everyone including Tonka Truck Leghorn would be a left-leaning, progressive “comrade.” That said, you know what is a guaranteed “get out of free jail” card like 99.9% of the time?

Whiteness. And specifically being a White man.

Which leads me to my final point:

2. Defending Gunn is less about drawing some deal-breaking moral line and more about defending the assumed right of White men to do or say shitty things in the name of edginess and provocation and escape judgment or punishment.

THIS is the part of the issue that many of these previous think pieces (I refuse to link them) either missed or intentionally left out.

These pieces are so ready to convince us that Gunn has changed because he made the Guardians of the Galaxy movies (lol) and are just so willing to gloss over what it is that he said and chalk it up to bad or undeveloped humor that he has since abandoned.

A lot more of them asserted that because most of us said some awful things during the pre-PC period (which for Gunn, was as recently as 2012 and extended before that, to 2008 approximately), Gunn should get pardoned because he was young (like he wasn’t a grown ass man at the age of 40) and because these things were acceptable then–apparently.

The thing is, though, when has pedophilia ever been funny?

That’s a trick question because it was never funny.

And everyone who has common sense (and is most likely marginalized) gets this…except White men.

And he ain’t the only one. Folx like Dan Harmon were in the paint with him too, making a whole ass video simulating rape on a baby doll because, again, “funny.”

At the end of the day, though, Gunn is a White man. And I do not believe for a second that he won’t make (or attempt) some kind of comeback (Mel Gibson, Mark Wahlberg, and James Franco immediately come to mind). However, in the interim, you would think that ol’ dude was real deal arrested of some “heinous crime” he did not commit and was unjustly sent to Rikers for three years to await some bail hearing–in solitary confinement–that took its sweet time coming–oh wait, that wasn’t him, but it sounds like someone else we know.

Indeed. Folx are acting as if Disney firing Gunn was the worst thing that has ever happened in the history of forever and like MadBlackThot, I have to laugh because that is absolutely and positively ludicrous…but unsurprising because White folx — particularly White men — are so used to being able to commit all their sins and iniquities with impunity that the mere PROSPECT of them facing consequences (or seeing brethren like Gunn face consequences) has them SHOOK.

It’s why #MeToo is such an interesting case study. For all its shortcomings (and the men who are already attempting to crawl back), the movement at least attempts to hold famous White men (and other men) accountable for their sexual crimes and does not allow the veneer of their “progressivism” to get in the way of that.

Which is certainly a novel concept for White men on this large a scale. That is, the idea of consequences.

Not only are these edgelord jokes usually completely off-limits for us (as they should be for everyone tbh), we are painfully cognizant (especially in my field) that any post or words we utter in opposition against, say, White Supremacy can be perceived as overly-aggressive, “reverse racist,”  and can be the difference between a cushy job and the unemployment line.

And that if the latter were to happen, no one would EVER defend us with the same fervor or energy they’re using to defend James Gunn (as director Lexi Alexander stated below). 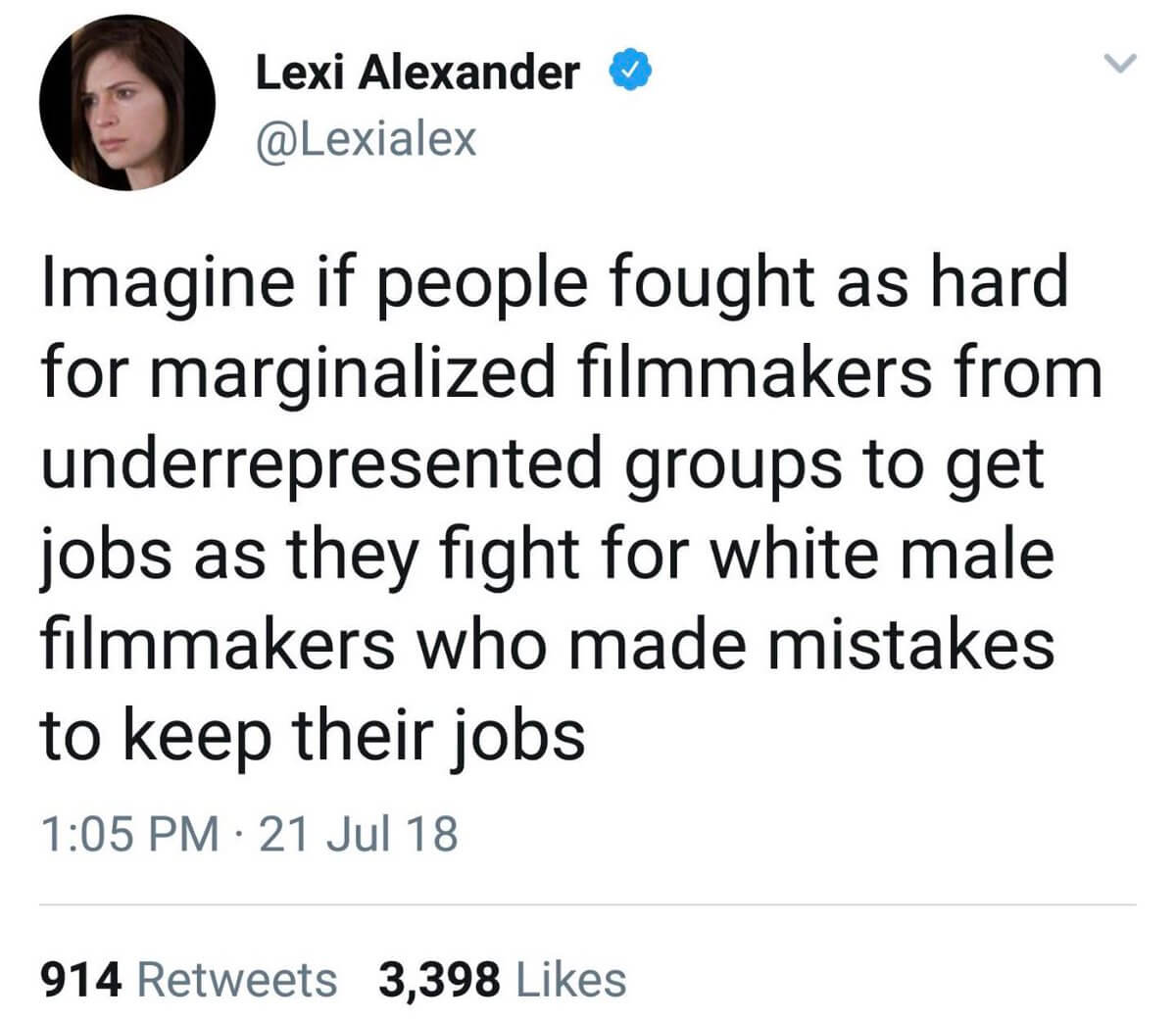 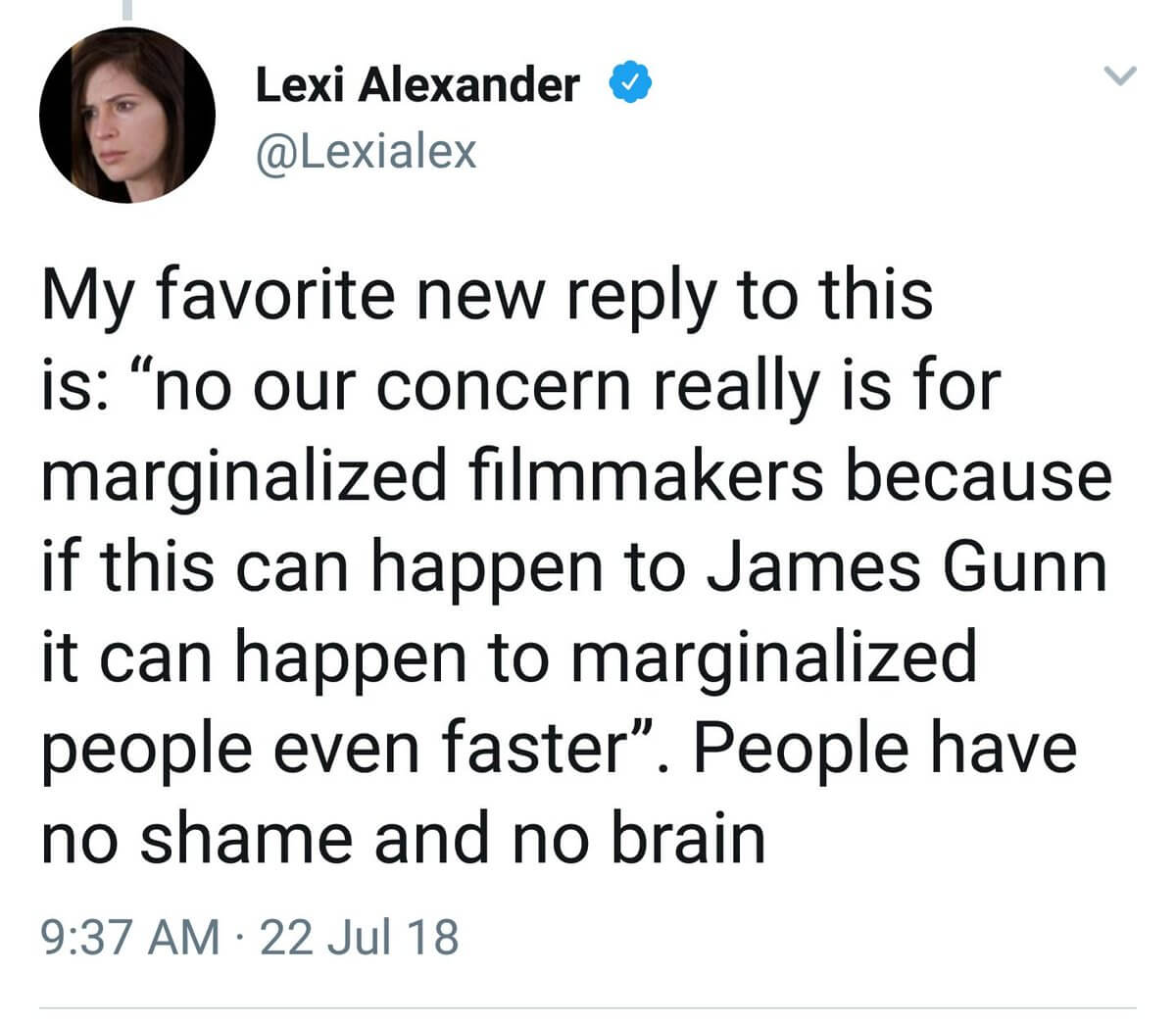 White men recognize no such stakes. White men possess no such cognizance. They can’t even spell that shit, much less experience it.

Which is exactly why Gunn will get no tears or defense from my queer Black ass.

If you wanna call out Disney for being inconsistent and hiring Gunn in the first place when they probably knew these tweets existed, go ahead and do that. But do not attempt to portray Gunn as some martyr when he is most certainly NOT.