If you would have told me last week that I would be beefing (“beefing” being generous because there is no beef if the beef is one-sided) with Pitch Perfect’s Rebel Wilson and join an apparently elite group of Black professionals and creatives who she unceremoniously blocked on Twitter, I would tell you that there’s no way we’re that deep into Trump’s darkest timeline.

But this is the darkest timeline and I am apparently “beefing” with Rebel Wilson.

I promise I’m not!

What do I mean by that? Well, this past weekend, Rebel Wilson taught a master class in how-to not take an L and turned a molehill into a fucking volcano. It was a blur really. One minute she was falsely claiming on The Ellen Degeneres Show that she was the first plus-sized woman ever to star in a romantic comedy (while promoting her upcoming movie Isn’t It Romantic) and the next minute she was playing Attack The Block Button with Black Twitter after many of us gently reminded her that she was not the first plus-sized woman to star in romantic comedies. Or in any movie, for that matter.

How did we get here? Well, to understand how this could have been blown to sizes bigger than Kurt Russell’s ego in Guardians of The Galaxy 2, one must understand the aversion that the #FFFFFF squad has to anything that remotely smells like accountability. Which is to say:

White people would rather die — or in this case, jeopardize their movie — than apologize.

White people are allergic to apologizing. Period. They hate doing it, they can’t stand it, and if they have to do it, then it’s going to result in some weird non-apology where they basically deny all wrongdoing and claim that you are the aggressive party for even being offended to begin with.

Some argue that this is part of a larger nature vs. nurture phenomenon and mention that it borders on the pathological. But one can’t interrogate this aversion to apologies without interrogating how apologies — i.e admission of wrongdoing — are viewed in society, how they function in power dynamics, and how they can be altered by privilege. Starting with the following:

Apologizing is viewed by general society as a show of weakness.

There’s this belief, especially in America, that admitting you’re sorry for any wrong or hurt is akin to death and that said death will include being shoved into the pokey by Ms. Trunchbull. Never to be seen again. This view of accountability as a show of weakness instead of strength (and self-awareness) is the same reason why so many parents have problems apologizing to their children. Or teachers take it as a fatal affront when they are corrected by their students. Or when women across the board feel inclined to over-apologize. Or when any person in a slightly higher position of power is checked by someone in a slightly lower position of power. Because apparently, if you own up to being loud and wrong, you lose some of that power and if there’s one thing the more melanin-deficient among us hate losing, it’s power.

Which leads me to my next point:

Privilege turns apologies into an undertaking for White people. This is doubly-so for White women due to combinations of their well-documented victim complex.

This is where Rebel re-enters our story. 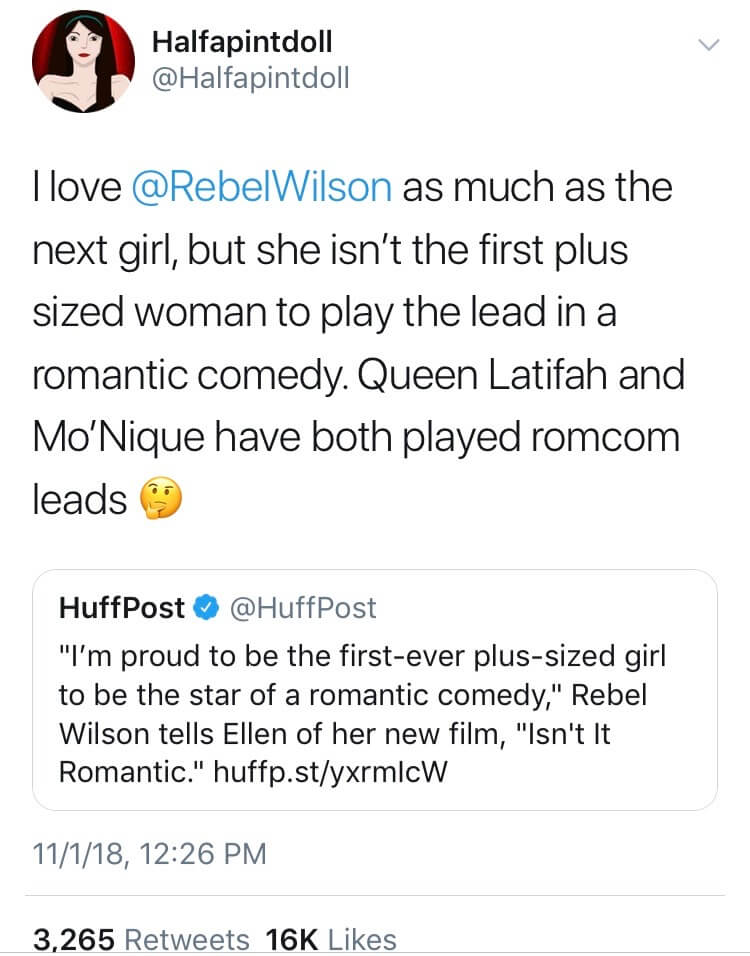 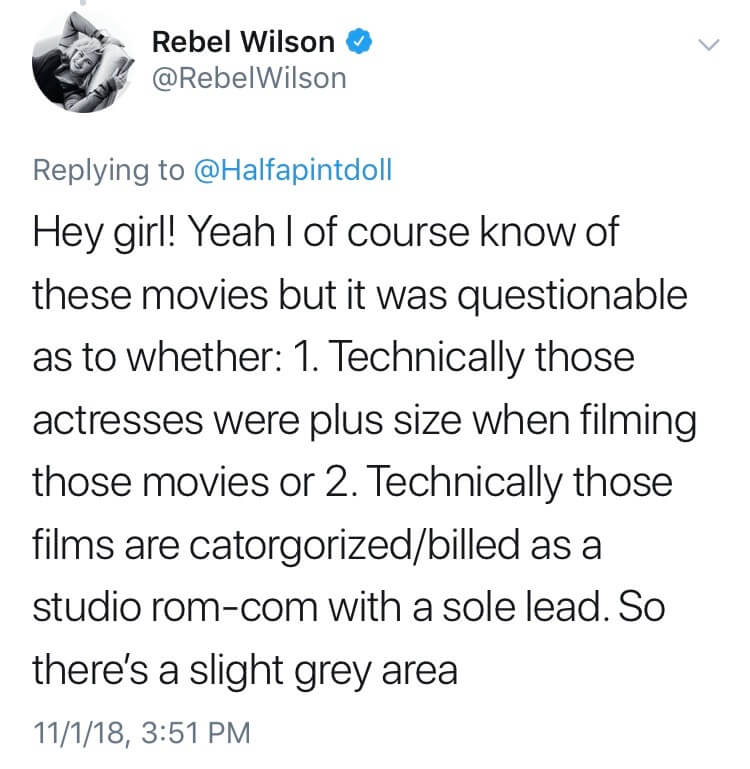 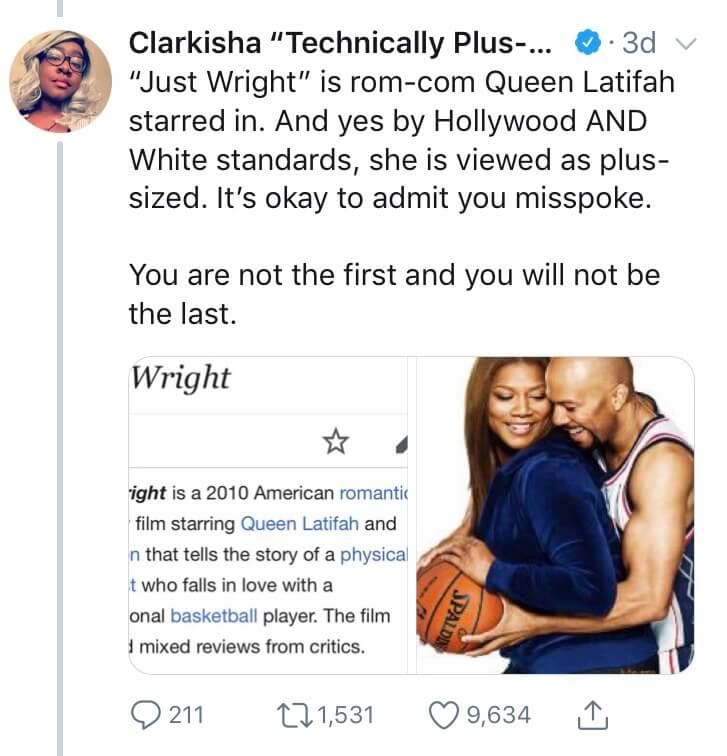 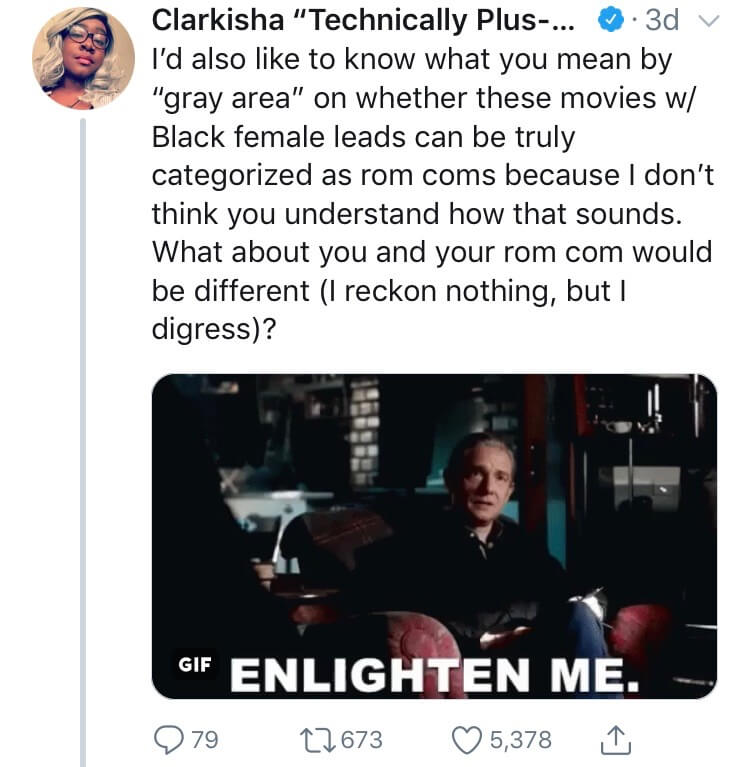 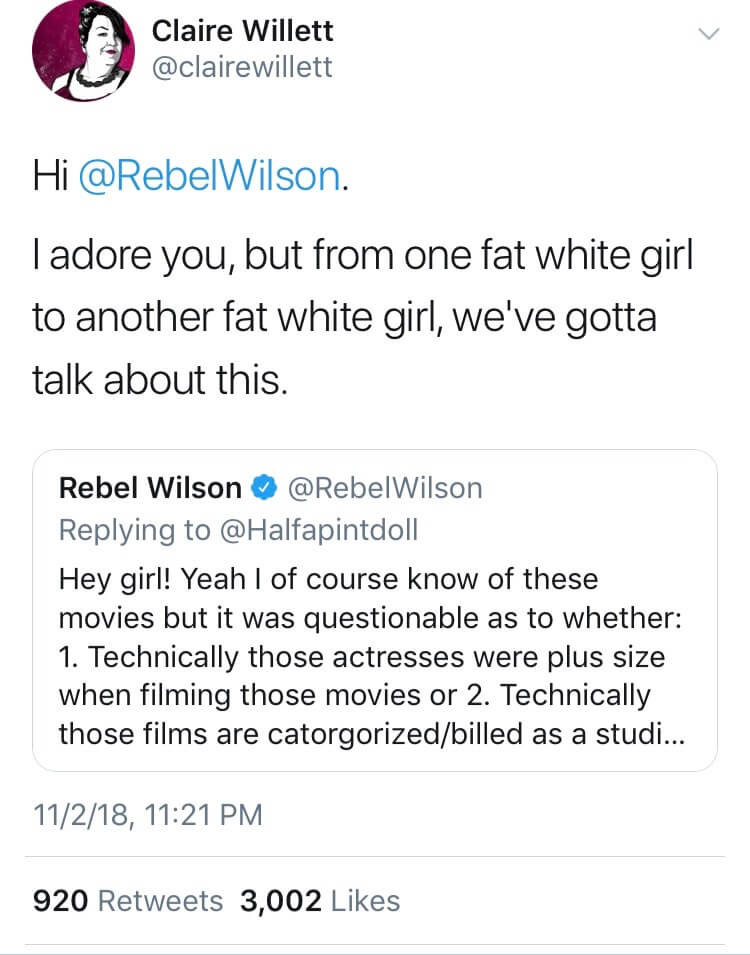 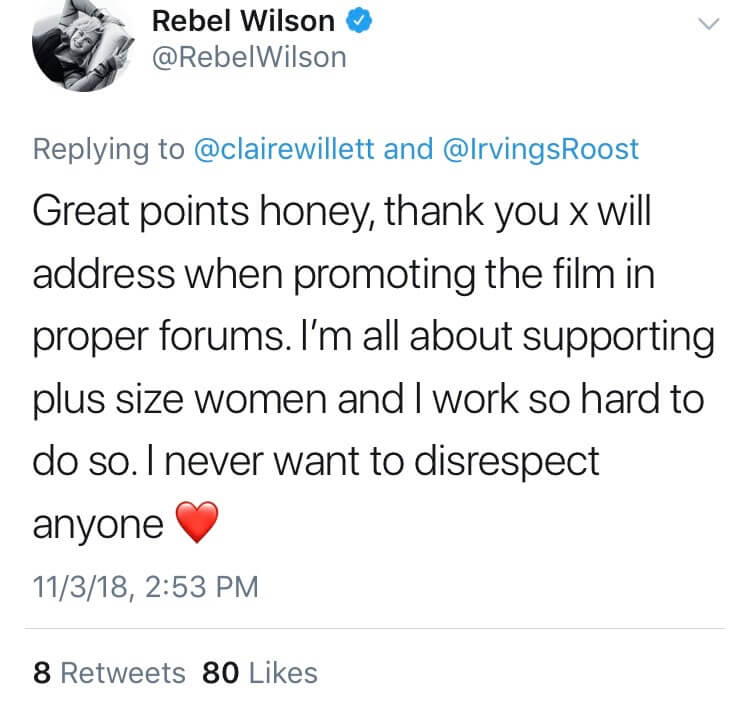 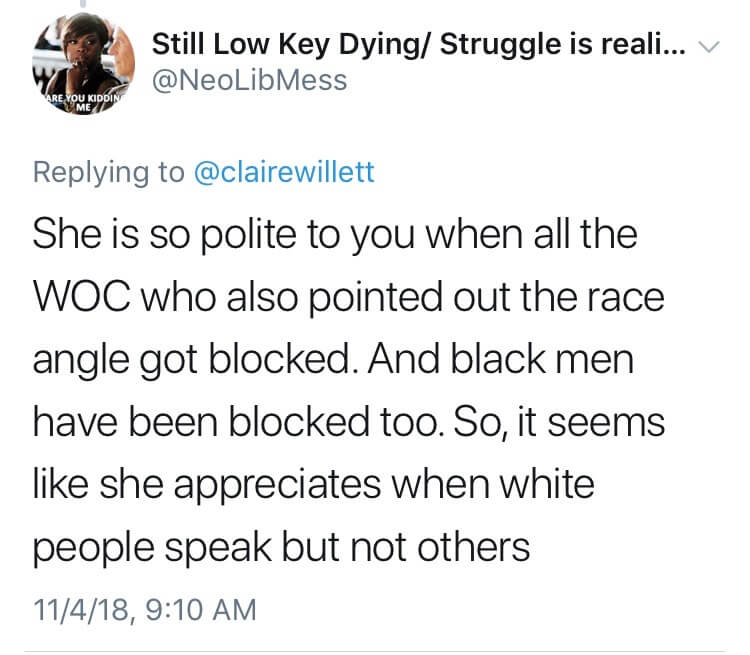 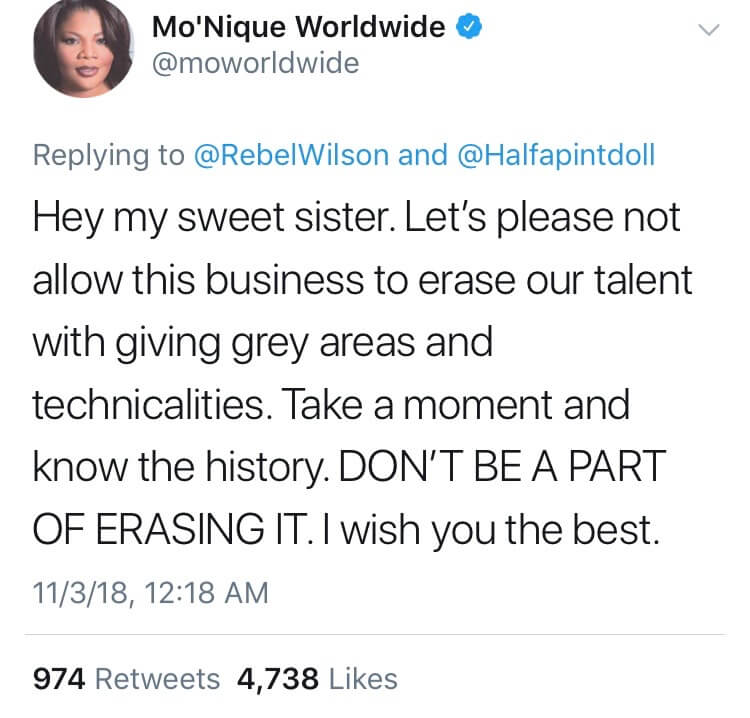 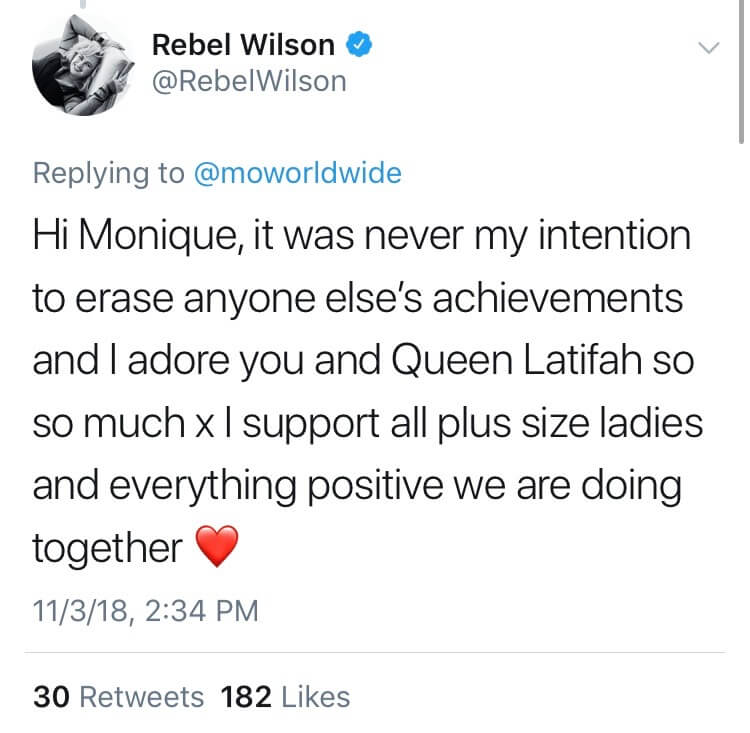 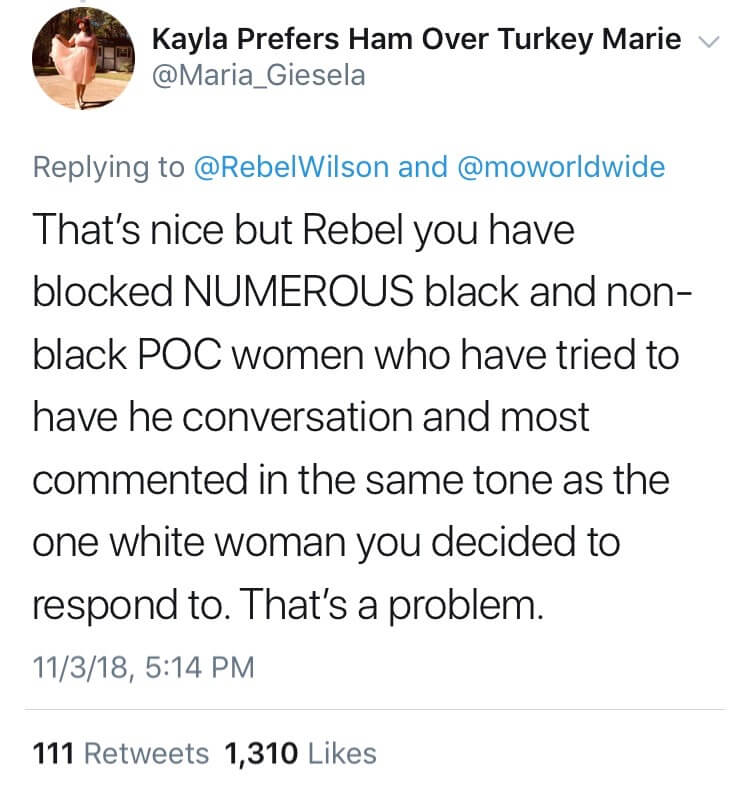 Most believe that the scandal came from Rebel misspeaking on Ellen. And most would be wrong. For there was no scandal until Rebel not only tried to change up the definitions of what it means to be plus-sized when she was challenged (and thus erase the accomplishments of particularly large Black women like Queen Latifah and Mo’Nique), but also refused to apologize to begin with, and quite frankly, rearranged the truth.

Which is more commonly known as lying.

If you’re familiar with White women, however, you know that this outcome isn’t surprising, particularly because the privilege they possess combined with their inferiority-superiority complex does some interesting things their weapons of choice:

Rebel is not a child. She is an adult White woman who figured that she stepped in it when the first thing out of her mouth was not “my bad” and instead a long-winded and overly verbose tweet that implied that Queen Latifah and Mo’Nique’s filmographies didn’t mean shit, because in the grand scheme of things, she was fatter than them (i.e they weren’t “technically plus-sized”…to her) and their movies were in “gray-areas” (gray meaning Black).

And with her obviously ducking any attempt to apologize at all costs, she still, as a White woman, had to save face. And obviously the go-to tactic for White women to save face in any situation is to shrink to victim status, gaslight the person or parties that were harmed and pretend that they were the aggressors and—their favorite word—“bullies” all along. Which is hilarious really. Because while many of us who are more marginalized would have just held that L to begin with and issued a public apology, Rebel didn’t see the need to. Because her privilege as a White woman and a celebrity (which I’ll get to) say that she doesn’t have to. That it’s beneath her. That we are beneath her. And why apologize to us, a bunch of negroes, when she can just block us, speak around us with other White women, and kiss up to one of the women she insulted with her fake support of “all” plus-sized women instead?

Which brings me to my final point:

In the age of social media, celebrity aggravates White people and their aversion to apologizing on larger platforms and forums.

For the last two years, White media outlets have failed to call out the consequences of unchecked Whiteness and, often times, have enabled it, like with the election of and continued spectacle around Trump. Pop culture outlets are no exception to this rule. This is never so clear as when another [White] celebrity commits a highly visible and harmful social blunder. Instead of being fact-checked by these outlets, they (save for a few) will instead coddle the aforementioned celebrity, paint the justified objection to their harmful blunder as “outrage” or, in Twitter-speak, “debate” and portray the celebrity as a hapless baby who couldn’t have possibly intended any wrongdoing (even though we known intentions don’t mean shit) and the objectors as their jealous bullies who feed off of a mob mentality.

And 99.9 percent of the time, that so-called mob is actually Black Twitter, but this is never said since Whiteness likes to talk around things that involve race.

The lot of you!

Of course, this is also not surprising when the extent of celebrity to the general populace equates to people in higher spheres of social status that one either strives to be like, make money like, or fuck. And this sentiment is what fuels the very “celebrity culture” that these stans and not-so-secret fans claim to loathe and creates this almost invisible shield around celebrities—as well as a very overinflated sense of self, I bet—that make it so that apologizing is so far off the radar of most celebrities.

There’s that and the fact that in the age of social media, where the lines of “celebrity culture” have been blurred by the introduction of influencers, people still really haven’t grasped how big a part social media plays in public relations—which is to say that social media is HUGE when it comes to public relations but hasn’t been treated as such even after all these years because out of touch entertainment professionals and Hollywood bigwigs still think that at the end of the day, “It’s just Facebook” or “It’s just Twitter.”

Which is ironic, because in actuality, “it’s not just Twitter.” It’s actually what could be the difference between your project making tons of money at the box office or it making three dollars. It could also be the difference between, like with Rebel Wilson, a small PR hiccup or a full-scale PR nightmare that ends up totally eclipsing the premiere of the trailer of your new movie.

All because, you, a White woman, refuse to learn how to properly apologize in the digital age.