How did I know that Star Wars was eventually gonna pull this queerphobic messbesides the biggest hint of having the same brown-haired White girl protagonist in all of their movies?

These jokes just write themselves…

In case you don’t know what I’m talking about, I’ll bring you up to speed. A week ago, Star Wars writer Jonathan Kasdan asserted in an interview that Lando was possibly, kinda, mostly likely, maybe, strongly pansexual, despite having no evidence on-screen or in canon to show this.

As you know, I’m a bit newer to this queer thing than most. And while I have no doubts that queerbaiting is a concept that proceeds this year and my existence, I was first introduced to the concept when, you guessed it, I heard about J. K. Rowling’s baiting-ass interview about Dumbledore and how he was possibly, kinda, mostly, likely, maybe, strongly gay back in 2007.

Mind you, I got into Harry Potter late (my Nigerian parents thought that and Pokémon were extra demonic, but strangely enough accepted Yu-Gi-Oh) and most of what I know of it stems from the movies. And obviously, watching the movies, there ain’t nary no sign of that mofo Dumbledore being gay. But because Rowling likes her brownie points, that was all that was needed to throw a crumb of hypothetical representation at queer/LGBTQIA+ audiences.

And of course, in true queerbaiting fashion, since her fake assertion of this, nothing has been done to develop that point. Hell, homie is set to appear in Fantastic Beasts: The Crimes of Grindelwald (played by Jude Law) and the powers that be made sure to confirm that they wouldn’t be making any mention of it or reference to it in the movie or, as they put it, he wouldn’t be “explicitly” gay.

Which is bullshit, of course. And it was something I thought about as I heard these new “details” about Lando.

In true fashion, I have a variety of issues with this. The first being the following:

1. One of my pet peeves (as a film student who graduated from a fancy schmancy-ass school that I paid way too much for) is when writers throw up a middle finger to the “show, don’t tell rule.”

Look. I don’t need a bunch of exposition to explain something you could have explained with 2.5 seconds of action. And in this case, I don’t need you yanking my chain, verbally telling me that Lando is pansexual when you could be showing me. in. the. movie.

And it’s not like it would be that hard either. We all know Lando as a smooth-ass operating scoundrel. It would be easy as hell to merely show this dude flirting with folx of different genders and species in one of those seedy bars that Star Wars likes so much. Hell, make it a montage if you’re feeling creative and humorous.

Look, I just wrote your movie for you.

2. The assumption that everyone would be some kind of gay in space is not as progressive as you think.

When that baiting-ass article on Lando came out, I saw a lot of what I assumed were decent Twitter takes, stating that it would be absurd to assume that everyone would be cis and heterosexual in space. That most folx would probably abide by no gender or ascribe to pansexuality like we assume Lando does.

Then after seeing one of my friends tweet about how it didn’t sit right with him, I started to think more about it. I mean, ideally, yes, this would be the case, but this only works if cishet (cis + heterosexual) is not the default or majority in space. That means having everyone engage in some type of sexual or gender expression that is not “straight” would have to be the norm. Otherwise, this doesn’t work. And this is mainly because, as we’ve seen, humanity kinda sucks ass and people tend to arbitrarily (and sometimes violently) divide themselves no matter where we go. Some more than others.

And if we’re taking the same bullshit into space, including [cis] White supremacist patriarchy (I mean “The Empire” is literally made up of Space Nazis), what the fuck is stopping the same systems of oppression, biases, and hierarchies from being replicated…in space? Besides a “hopeful” locale change? And besides leaving Chet and them behind (which I doubt would happen and may honestly not do shit, because we would still have deal with intra-community violence and bigotrywhich includes colorism, transphobia, homophobia, misogyny, etcfrom our own skinfolk)?

I mean, y’all ain’t see that Matt Damon movie Elysium? You really things will suddenly switch up if we aren’t on Earth?

3. Saying Lando isn’t openly pansexual in the film because it would “take away from the real story” says a lot about how bigoted you are (and think).

This was by far the most annoying and bigoted part of this discourse.

However, like with most homophobe talking points, it’s not new.

Indeed. I heard this kind of thing a lot when we were informed that scenes nodding to characters like Valkyrie and Ayo and their sexualities had been cut. In the midst of battling back homophobes and racists and the intersections thereof, both groups tended to agree on the fact that being more overt with these characters sexualities would have somehow distracted from the story or made it less than.

Which is funny, because we had time to nod to a possible thing happening between Thor and Valkyrie and time to attempt to develop Whac’kabi and his undercooked romance with Okoye, but the moment folx question where this kind of representation is for queer folx, it is somehow “extraneous” and not needed. 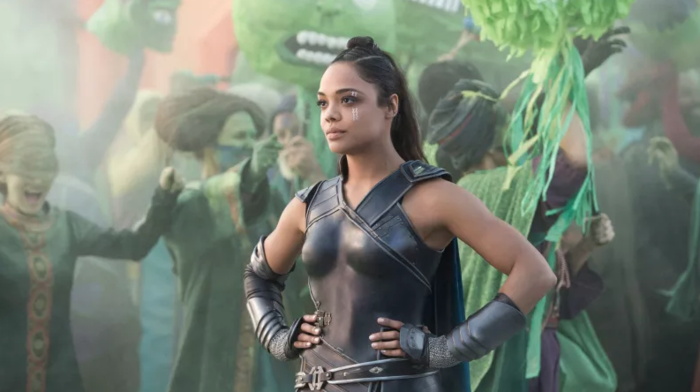 Even if I assume some folx don’t mean any harm when they say things like this (I don’t, because homophobia and queerphobia are intrinsic to the society we live in), it IS harmful. Because the implication is that our existence as queer folx is somehow lesser and “extraneous” and isn’t worth exploring on any screen or in any medium.

It’s similar to what we heard about Iron Fist and how him being Asian-American would be “extraneous” and take away from the story. Even though his diasporic struggle would have enriched it. It’s similar to what we heard about how MJ being Black is “extraneous,” because her race somehow takes away from her story, even though not nary one of y’all yeehaw muthafuckas can name anything significant about “canon” Mary Jane besides having red hair and being Peter’s forever-in-need-of-saving girlfriend.

Let’s call a spade a spade. The assumption is that anything that deviates from a White normincluding queernessis “extraneous” and thereby unnecessary and somehow too cumbersome to include in your so-called “progressive” story that isn’t so progressive after all if there isn’t nary a queer person to be found in it.

Phantom Menace. That Slave Leia outfit. Any reference to pod-racing. 99.9% of Anakin’s scenes in the prequels. Snoke. The Unbearable Whiteness of The Star Wars Universe. Jar Jar Fucking Binks.

I can do this all day.

Nah. Fuck that “extraneous” shit. I would rather homophobe-lites puff out their chests and just say that they “don’t wanna see that gay shit” on their screensno matter how big or small “that gay shit” israther than dick around and say there’s no time for it in the narrative or whatever the fuck.

Because I’ma keep it completely 100: if we have time for a [Han] Solo movie that no one asked for and one that is clocking in with the lowest debut of any [Disney] Star Wars movie, we do, in fact, have time for “that gay shit.”

And we do, in fact, have time for a Lando movie or a Lando-centric plot that does more to *show* Lando’s pansexuality rather than merely use it as ally clickbait in some press tour interview.