On Wednesday afternoon, American Idol runner-up and Celebrity Apprentice contestant Clay Aiken tweeted that he was no longer going to defend Donald Trump against claims of racism.

“Remember all those times I defended Donald Trump and believe he was not actually racist?” Aiken tweeted. “Well, I am a f****ng dumbass. #ImSorry.”

What exactly spurred the change of heart? Aiken wasn’t clear, but it very easily could’ve had to do with Trump’s Tuesday-afternoon rant in which he claimed “both sides” were to blame for violence that erupted over the weekend in Charlottesville, Virginia, which led to the death of Heather Heyer. During his speech, Trump also said there were some “very fine people” among the people on both sides, including white nationalists marching.

Clay Aiken is a Democrat and ran as one when he attempted, and failed, to represent North Carolina’s 2nd district in Congress. He alsothrew support behind Vermont senator Bernie Sanders during the 2016 Democratic primaries.

However, in the last year, he’s also defended Trump to Fox Business, saying he doesn’t think Trump is a racist.

Prior to Inauguration Day, Aiken also tweetedthat he was a Progressive who “doesn’t think [Trump’s] going to be as awful as many people fear. Earlier this year, he also called Trump “gracious” and a “nice guy” on the podcast Under the Dome.

Aiken garnered a few headlines from the podcast for calling out the fact that Trump had no sayin who was fired from his Apprentice empire. Aiken said that NBC executives made the decision and fed Trump the loser’s name through a fake phone on his desk.

After announcing his about-facepeople were unkind to Aiken on Twitter, many of them believing that he espoused support for Trump. 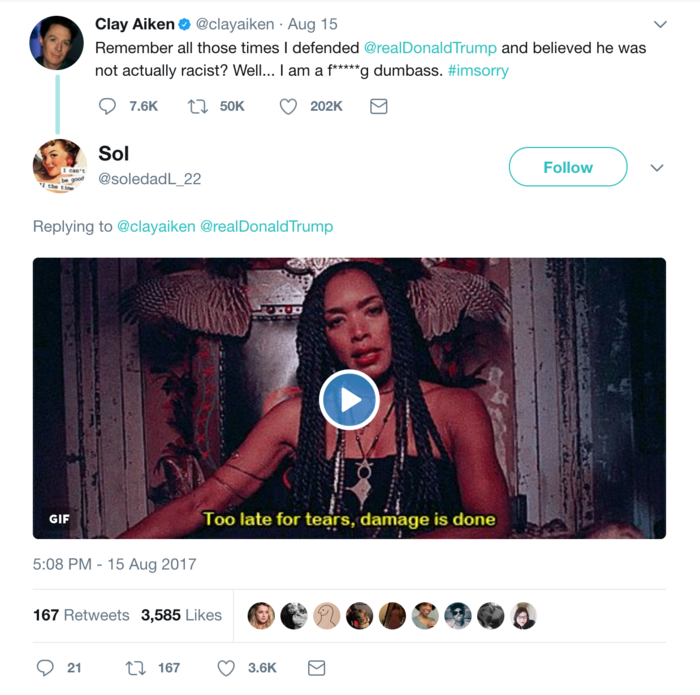 Aiken then quoted a few tweets sent to him and continued to defend his left-wing cred, citing past criticism of Trump, even if he didn’t go as far as believing Trump is a racist. 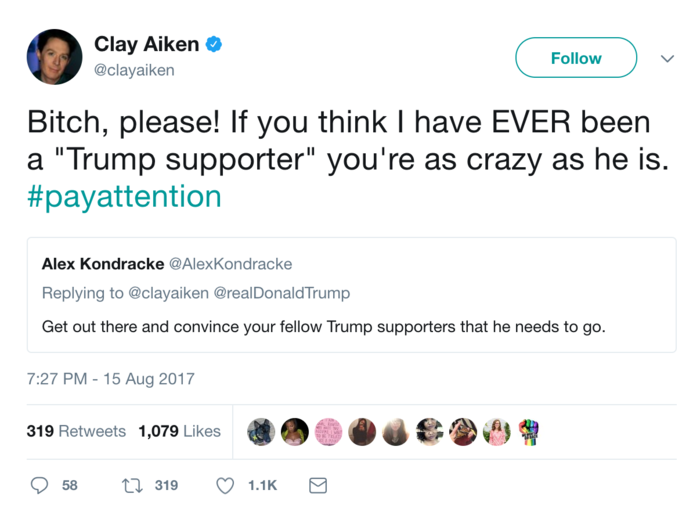 Just for a refresher course, throughout Trump’s primary and presidential campaign, he made several racially-charged comments, including calling Mexicans “rapists,” and suggested a Mexican judge could not do his job because of his race. He continues to believe in the guilt of the Central Park Five, even after being exonerated by DNA evidence. He started the Birther movement against president Barack Obama. Trump has also implemented a targeted “travel ban” of individuals from Muslim-majority countries, which Sen. Sanders deemed “racist” and “anti-Islamic” when it was unveiled in March.

But, hey, if it’s time to come to realizations about Trump, maybe there are some people Aiken can call.