Courtney Act is having quite a year.

In February, the RuPaul’s Drag Race star won Celebrity Big Brother in the United Kingdom, and not long after made the decision to move permanently to London. “I didn’t quite understand the magic of London until recently. I don’t know how I never saw it before,” she says, when we meet in Soho. “There’s so much culture, depth, richness, diversity. I love it here.”

The relocation already appears to be paying off; just last week, Act confirmed that she will be hosting her very own late night “dragazine” show on Channel 4.

“I had two childhood dreams; one was to write a pop album and the other was to have a variety show, which I honestly never thought would happen,” she says. The first, she achieved with 2015’s Kaleidoscope. “After Celebrity Big Brother, I had a meeting with a production company to talk about what I wanted to do. And after I’d given what I thought were all the right answers, I said ‘Well, I love the Sonny and Cher era of television,’ thinking they’d never go for it, and now it’s happening!” 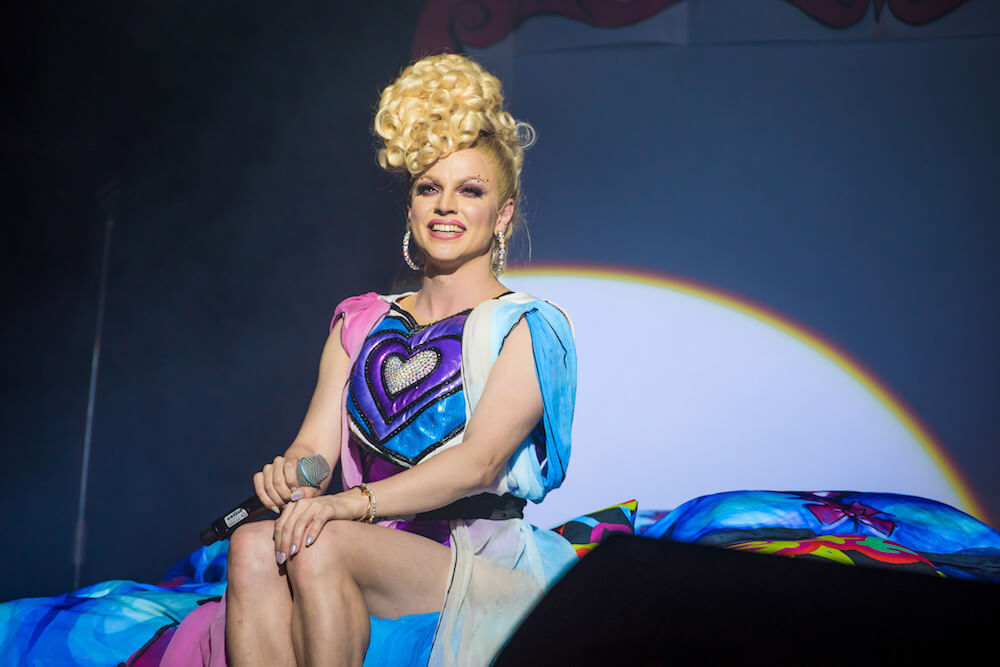 The programme, which has the working title The Courtney Act Show, will air later in the year. Until then, Act will be busy with Under The Covers, a new live show that she will be performing from August 4th through 18th at the Edinburgh Fringe Festival. Consisting entirely of songs which are famous for being covered by different artists, Under The Covers is both a showcase for Courtney’s singing voice and an exploration of how a song can change meaning depending on who is performing it.

“‘I Will Always Love You’ is a perfect example,” she says. “Dolly wrote that song in 15 minutes, it’s a breakup song and a love song, a Dolly classic. And then obviously Whitney covered it; when Dolly heard that version for the first time, she was in her car and it was on the radio and she didn’t even recognise it because Whitney had added so much of herself.”

Despite a packed schedule, Act still makes time for Drag Race, and like the rest of us, watched with great interest as the show’s complicated, at times messy racial dynamics played out on Season 10 of Untucked, with The Vixen making viewers (and her fellow queens) aware of just how differently black contestants are perceived.

“I was watching like, ‘Wow, look at that, they’re including this conversation on race,'” Act says. “But then we got to the reunion, and I started to wonder– did they include it because they realised how insightful and important it was, or was something really tone-deaf going on here? It revealed something about Ru’s privilege in that situation. Obviously, he’s a gay black man, and he’s worked hard, and I don’t want to take away any of that, but he is certainly someone who has a lot of privilege now. I almost felt like that whole situation began the way I would expect a white host to handle it, coming for The Vixen first before Eureka. And The Vixen called it out, and then we went to Eureka. That could all be coincidence, but I think it’s representative of the bigger issue that The Vixen, Asia, Monique, and Monet were trying to talk about and bring light to in the first few episodes.”

When it comes to the Asia vs. RuPaul confrontation that formed the most memorable part of the reunion episode, Courtney is keen to note just how much it means that a Drag Race queen would risk a backlash by so vehemently disagreeing with the show’s host.

“RuPaul, for all of us queens who grew up admiring him, it’s very intimidating just being in the same room,” Act says. “I’ve bumped into him three times in public, and my little heart races. It’s like it literally affects my physiology.” 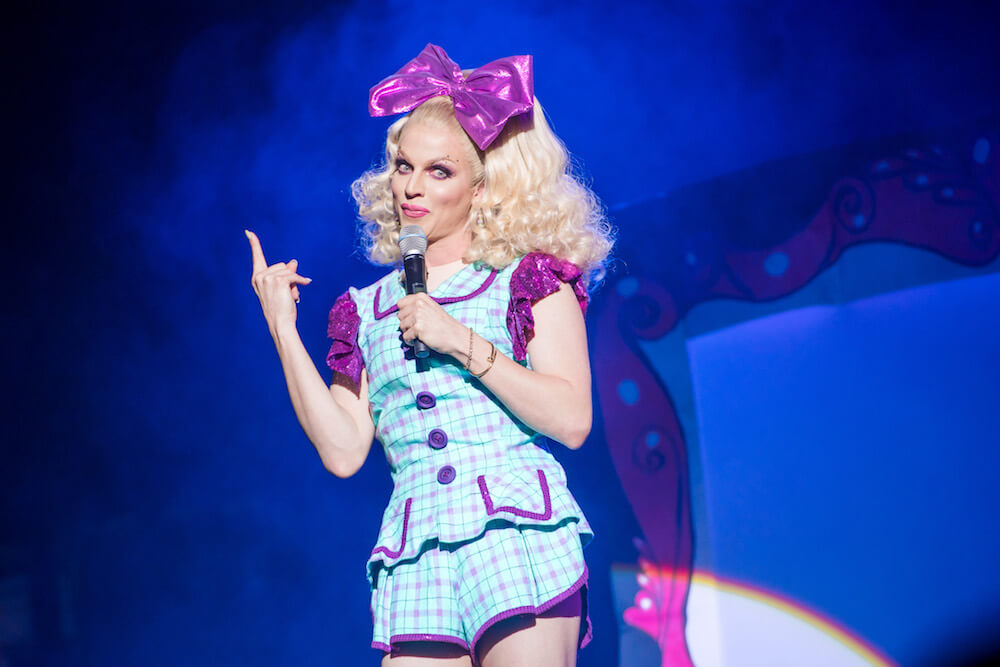 She smiles somewhat impishly, and adds: “Turns out I didn’t have to worry, because he didn’t acknowledge me or recognise me in public, so I didn’t have to engage him in conversation or have my wits about me! But for Asia to stand up against Ru on the show, not just once, but in a real back-and-forth, it took a lot to do that. And I think Asia was right. When Ru said ‘Some people just have to help themselves,’ we’re not talking about someone who is a drug user who we’ve given all our love and support to, and we’re at our wits’ end. We’re talking about The Vixen, who’s in our family, on the show, part of our community. When Ru told the Vixen that she could have just been quiet, I thought that was the biggest misstep.”

Act also points out that Ru’s advice to The Vixen to “just say nothing” is odd, considering he retweeted a recent speech by the famously outspoken Maxine Waters, not to mention his own history as an activist and provocateur.

“Let’s go back to the MTV Awards with Milton Berle, where he bit back,” she says. “Maybe that’s where he was speaking from, because he was blacklisted after that encounter. Maybe he sees himself in The Vixen and was trying to help, I don’t know.”

Courtney is quick to add that she remains a huge admirer of RuPaul, and is very proud to have been on Drag Race. “I don’t want to bite the hand that feeds me; I grew up inspired by RuPaul, and I wouldn’t have the opportunities I do now without him and the show,” she says. “But it’s important to acknowledge that criticising something isn’t the same as attacking it. If you can see that something can be improved, why not try?”

“Look, I’m not saying I’d be any better at handling that situation than Ru,” she continues. “I would do my best, which I know Ru is also doing, but if you’re going to bring up those subjects then you have a responsibility to see them through and to be respectful and understanding and compassionate. I think that’s how we learn. I’ve seen some really interesting, thought-provoking articles about this because of the show, so it’s good that we’re having these conversations. The nice thing is, for the most part, people are handling it with respect.”

The ability to approach these kinds of difficult conversations with kindness and grace was at least partly what made Courtney such a fan favourite (and ultimately the winner) on Celebrity Big Brother UK earlier this year. “I didn’t go into the house with the intention to educate anyone,” she says, “but if I’m talking to somebody, and there’s a point of clarification, I say something. In social justice issues, it sometimes feels easier to say nothing, but when you say something in a compassionate way, I’ve always been shocked by how well it’s been received.”

“During Celebrity Big Brother,” she continues, “a housemate asked me if I was going to live as a woman and have gender reassignment surgery; I wasn’t offended by that question. After all, we’re in a house closed off from the world, so there’s no Google. Although that’s not to say if you’re talking to a minority that it’s up to them to answer questions and explain themselves, because we do have Google, and you can learn all this stuff yourself. If you’re genuinely interested, it’s incumbent upon you to educate yourself. But in the house, having those conversations, and talking with India Willoughby about trans and queer identities; I’m so glad that those bits got shown on television.”

Does she think that seeing a drag queen win one of the most widely-watched reality shows in the UK will have a positive impact on how people perceive the LGBTQ community? “I think it’s major,” she says. “The greater public is seeing the queer experience be accepted at all these levels; corporately, governmentally, personally, and it sinks into the psyche and changes opinions. When we see queer stories being told on TV, it just increases people’s knowledge, and instead of stereotypes, instead of many stories becoming one story, we get to hear many stories and we understand that it’s not just about white gay men’s experience, it’s really intersectional.” 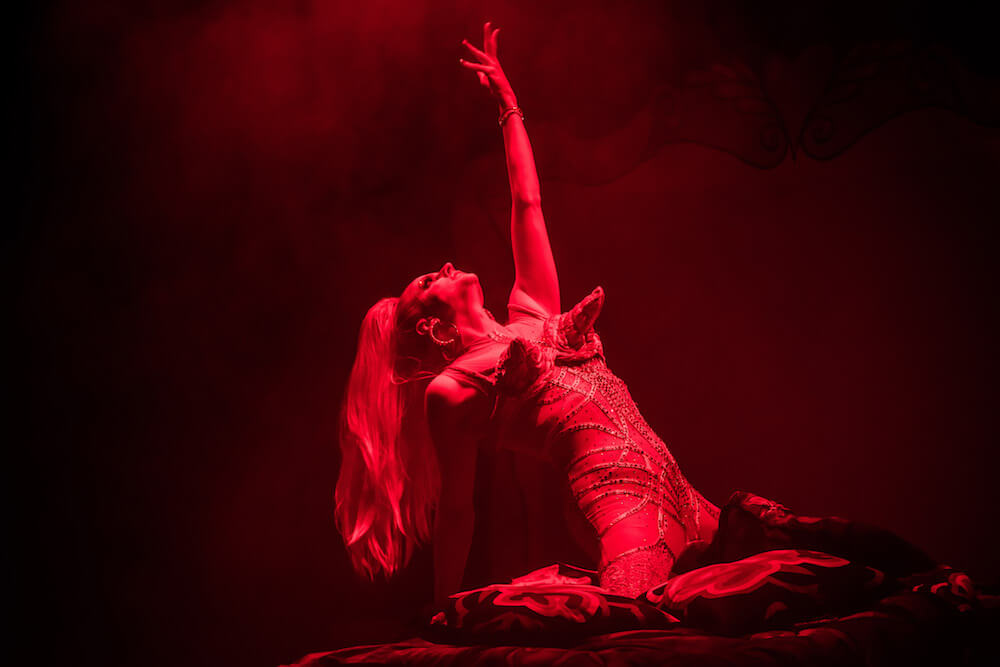 When I ask Act if there is an openly queer person in the world of entertainment who she admires, she immediately starts to sing the praises of British television presenter Rylan Clark-Neal. “He is just so gay!” she says. “Coming from Australia and having lived in America for years, I just find watching him be so bloody gay on television an absolute joy. And then there’s someone like Munroe Bergdorf, who is such an amazing activist. I love the way she speaks about things, even just the memes she’ll share that stop you in your tracks and really make you think.”

Act takes moments of silence, as she ruminates on how to best express herself.  While this considered, careful presentation of herself drew criticisms of her as “cold” and “fake” during her season of Drag Race, I think it actually indicates the opposite. Throughout our conversation, Act pauses to ensure she is using the most sensitive and appropriate language, and to check her own relative privilege within the queer community.

“It’s not the oppressed’s job to educate the oppressor, and sometimes you’re not able to,” she says. “But my privilege is that I am able to. I feel comfortable talking about these things, and I have a platform, and I’m going to use it.”