Brimming with hysterical self-awareness and well-coordinated “violence design,” Daniel McCoy’s sister plays, Dick Pix and Perfect Teeth, make for a stunning exploration of the casualties of a largely queer-exclusive gender equity movement — even if at times their “inside baseball” points of departure may prove inaccessible for audience members who don’t work in the arts.

In Perfect Teeth, Dylan, an impoverished gay playwright working at a call center, confronts Kyle, another gay playwright on the brink of selling his first screenplay, about a drunken sexual encounter between the two he claims was not consensual. Kyle doesn’t agree. Their relationship spins out of control as Dylan’s circumstances become more desperate and Kyle’s denials become more hostile. Whereas the bulk of public #MeToo conversations highlight the power differential between straight cis men and straight cis women, McCoy disrupts the narrative by exposing how even apparently egalitarian, queer relationships can be corrupted by dynamics that hinge on career opportunities, even prospective ones. The capitalism of artmaking makes monsters of us all. 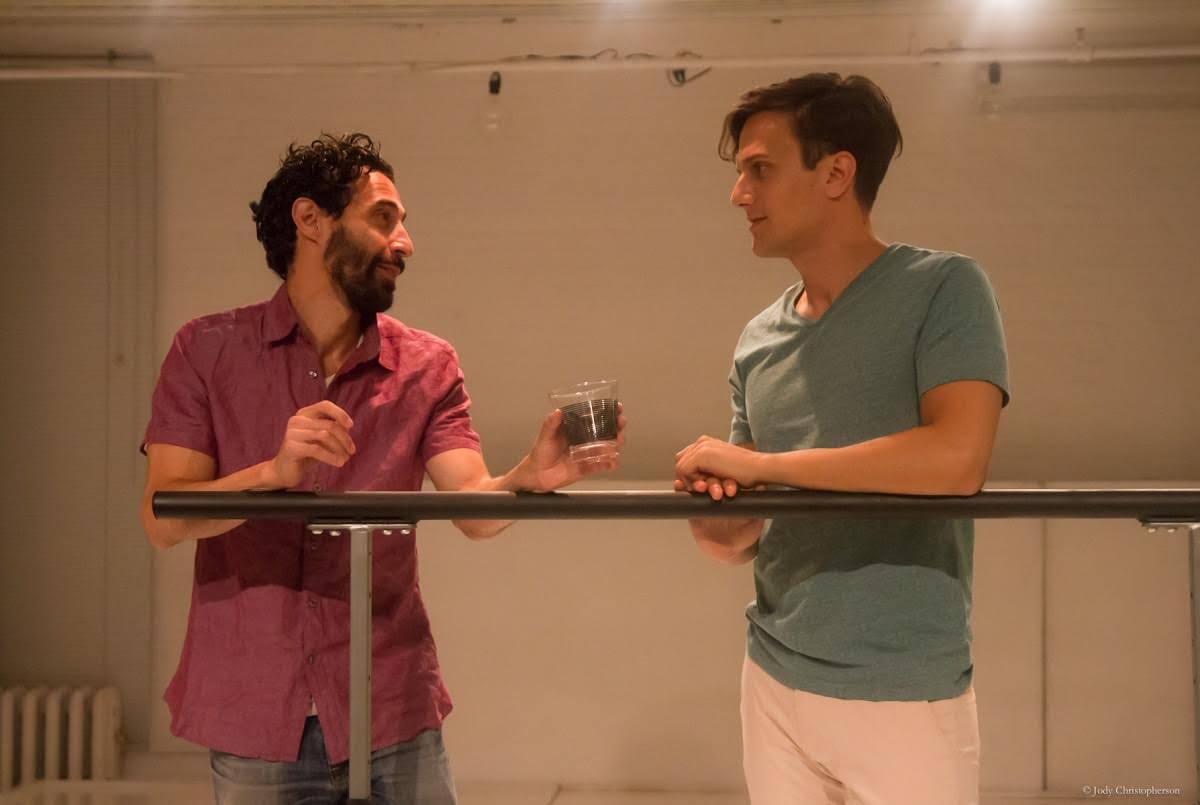 Dick Pix expands on this thesis. Prep school headmistress Mrs. Marbleblatt’s opening monologue reveals that having been caught on camera masturbating in a faculty restroom by a student, she plans to take her newly-inherited riches to the world of art patronage in the wake of her resignation. Meanwhile, Calvin, a New York hipster photographer, decides to create an exhibit showcasing photographs of his penis, to the eye-rolls of both his gender-fluid gallery owner friend, Fyn, and publicist girlfriend, Grace. In fact, every character in Dick Pix is primarily identified by their relationship to Calvin — his gallery owner friend, his publicist girlfriend, his art handlers. Even Mrs. Marbleblatt becomes his patron. But when a fluke electromagnetic event causes all of Grace’s naughty selfies to be sent to everyone in her phone, she becomes an unwitting Internet celebrity, flipping the script on Calvin’s birthright of entitlement and forcing a consideration of each character on their own terms.

Both pieces rely on a certain degree of prior knowledge — Perfect Teeth assumes an understanding of the vicissitudes of life as a playwright; and Dick Pix’s jokes about Vice, the 92nd Street Y, Pablo Picasso’s misogyny, gender reversals, vocal disembodiment, the “magical Negro” trope reconfigured as “magical trans person,” and callbacks to feminist tropes like the Guerrilla Girls and the Bechdel Test, may limit McCoy’s project to a kind of preaching-to-the-choir. That notwithstanding, McCoy’s deft, surreal, and fever-dream writing style makes the pair of plays a brain-candy delight for those in the know, especially when taken together.

Though Jose Joaquin Perez’s and Maxwell Eddy’s performances of an abusive gay friendship between artists is believable, well researched, and well directed, I hoped for more of a roadmap out of the vicious cycle they embody. Kyle’s sadism becomes so over-the-top as to become risible in some moments without more pushback from Dylan. And at times, the two men faced only one side of the audience, which flanked the stage on both sides — this was a bummer in a piece that relies so much on our continual engagement with and reassessments of both men. I wonder what a third character could have supplied, both in terms of a way in for audience members who are not playwrights themselves and as a way to indict the cultural inequities that sustain abuse in one-to-one relationships in the arts.

The ensemble work in Dick Pix, on the other hand, rises to the cultural conversations at hand skillfully and with a sense of humor that cultivates goodwill for all characters. Moreover, McCoy’s tracking of and development of certain motifs over the duration of the play lend it a symphonic quality that makes it feel like a full meal of theater. June Ballinger, as Mrs. Marbleblatt, is a farcical joy, as are Bruce Jones as Fyn and Erinn Holmes and Lynne Marie Rosenberg as the art handlers. McCoy offsets the exasperation we might otherwise nurse for David Gelles’ solipsistic Calvin by putting many of his words in Grace’s voice, whose code-switching is handled impeccably by Kate Abbruzzese. Nowhere is it more clear that these actors understand exactly what play they are in than during the irreverent tribal dream sequence in which Grace is tied up and catcalled by the rest of the company, who are beating bongos with dildos. 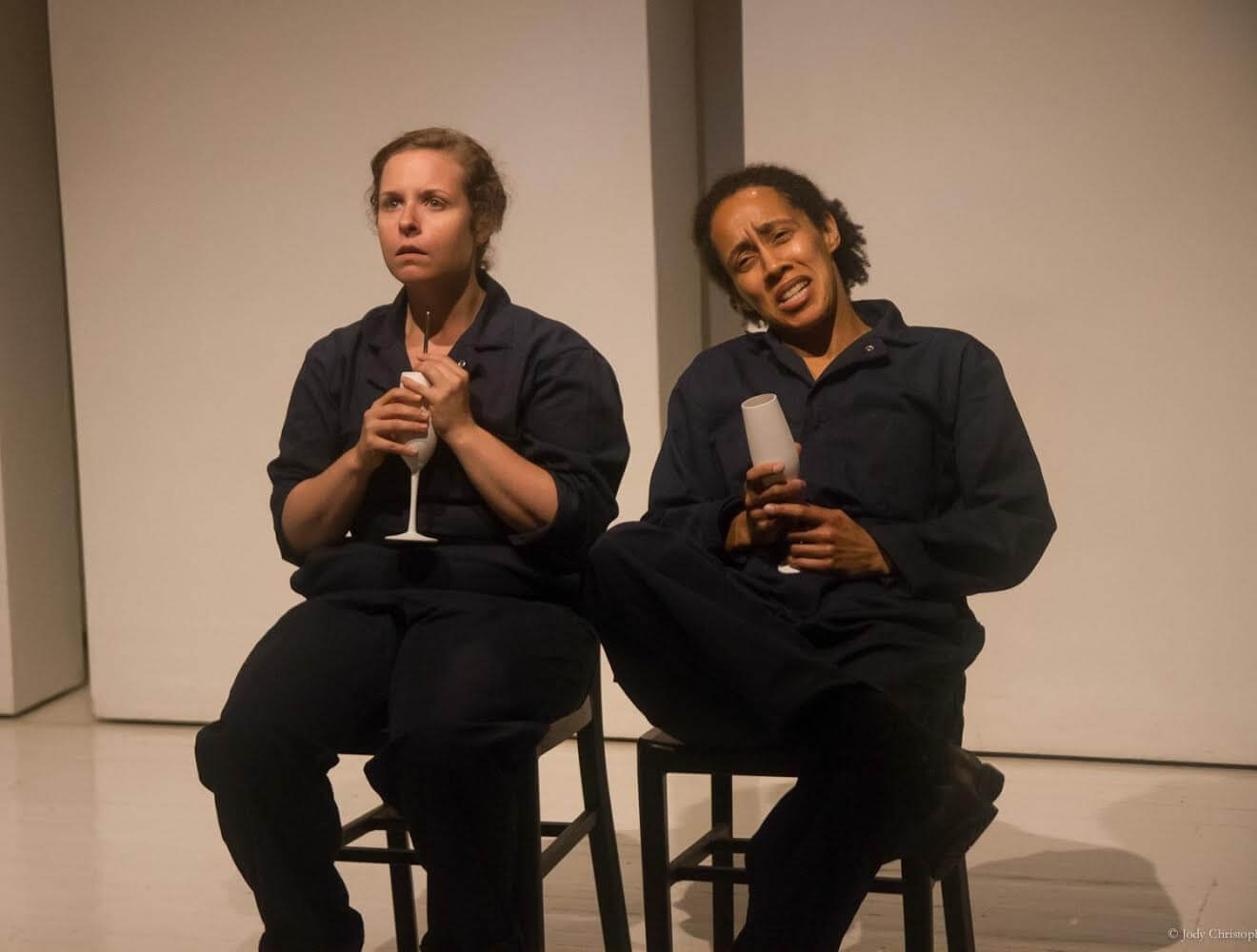 Remarkably, both plays post spoiler-free trigger warnings outside the theater, with instructions on how to gain more information on potential triggers in each production prior to entry. As the theater world struggles, on one hand, to address hot-button topics like gender, sexual consent, and bodily agency; and on the other, to empower its audience members to opt out of events that may be detrimental to their mental health, this strikes me as a sophisticated and forward-thinking solution that advances both causes with respect and due diligence. These plays’ triggers are also available to view online.

It may be that McCoy’s pair of plays is intended for audience members who may be implicated in his unyielding critiques of toxic power play in art and theater — not everything has to be for everybody. In any case, these industries, far from blameless in the ongoing struggle for equity and social justice, need to be confronted by voices on the inside. Let’s hope that Daniel McCoy’s is among the first in a long series of such confrontations.

Perfect Teeth, directed by David Hilder, and Dick Pix, directed by Heidi Handselman, were presented in July and August at Theaterlab by Richard Pictures and TLAB SHARES, in association with Anne L. Bernstein. More information on both plays can be found at perfectpixplays.com. Both plays are registered with the New York Innovative Theatre Awards, and can be voted for at www.nyitawards.com.