“Is that Smokey?” yelled one of the onlookers at dapperQ’s annual fashion show, held Wednesday night at the Brooklyn Museum. The onlooker’s friend confirmed that the model walking during the A/C Space segment of the show was indeed Smokey. “YAS BITCH, YOU BETTER WOOOOOORK.” That scene and the rest of the interactive, slightly raucous, high energy show was certainly not typical for New York Fashion Week but, given the show’s self-appointed status as the “largest celebration of queer style during NYFW,” the organizers never had any intentions of doing what was par for the course.

dapperQ is a website and production company focused on style mostly for masculine of center queer individuals. Having started their fashion show half a decade ago, initially at a bar, they have made a name for themselves as they’ve grown, brandishing a type of 360 degree inclusion that’s recently begun to seep in to the overall industry. And as they host it all as a consumer facing event — as opposed to the lion’s share of New York Fashion Week runway shows, which keep their invite list restricted to media, buyers, stylists, celebrities and other industry notables — they make sure to have a damn good time while doing it. 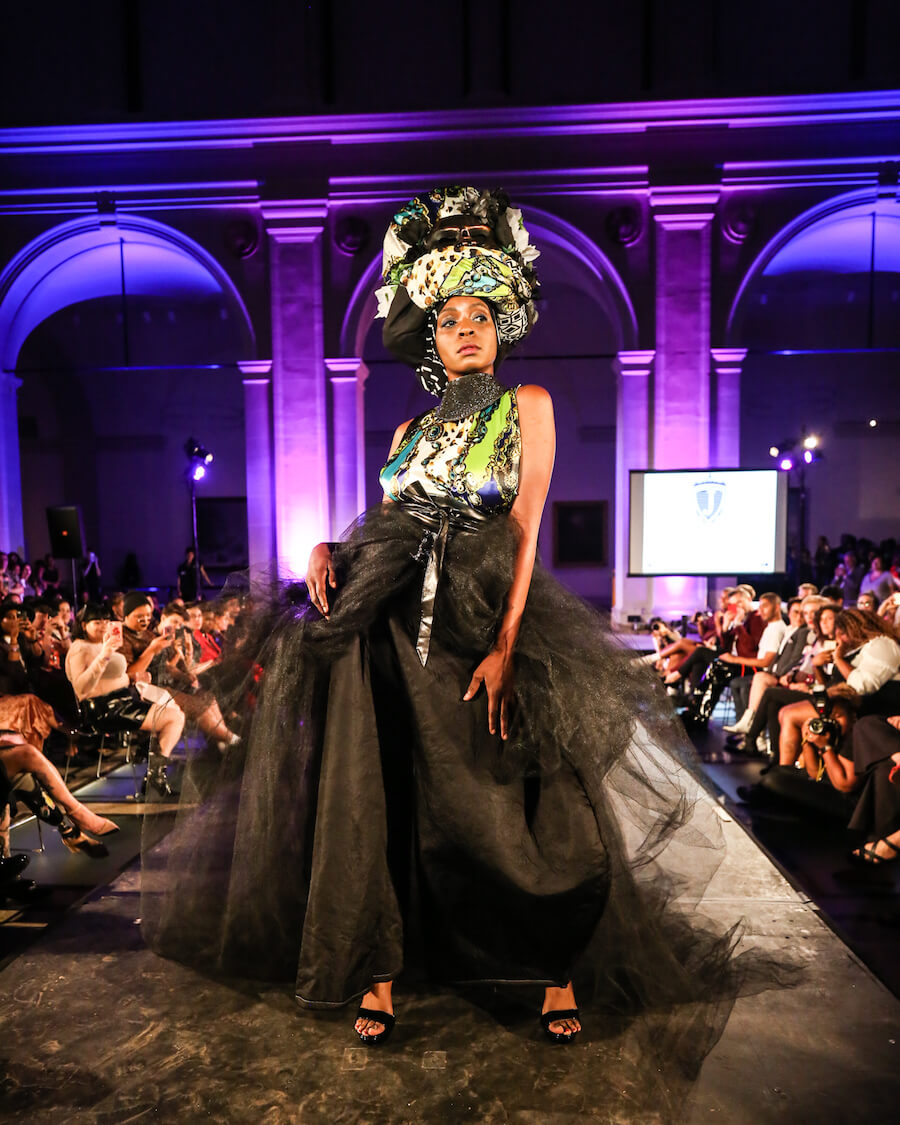 “What’s important really is the inclusivity and diversity,” E. Jaguar Beckford, who has been involved with the dapperQ show since the beginning as a designer with their brand Jag & Co, told INTO in a post-show interview. Beckford is also a producer of Rainbow Fashion Week, a pre-Pride series of events focusing on queer designers. “That’s what’s missing from the fashion world. It’s always models have to be this size, this height, this color. Everyone deserves to see a representation of themselves on the runway because everyone buys clothes.” And in this production, they do.

Over the span of 10 collections, models ranged in height, size, gender identity, color and almost anything else you can imagine. At least one sported a prosthetic and another was on crutches.  And through it all, they were not only accepted but celebrated.

“There’s so much energy when you get up there, it’s so cool,” Dee Tranny Bear, who walked in The Phluid Project’s segment, said. “You get that feedback from the crowd and it’s like ‘oh my god.’” All the while, the models were showcasing the designs of ten up and coming queer directed brands.

The Phluid Project, the new gender neutral store in New York City, was joined by brands like Kris Harring Apparel Group, A/C Space, Audio Helkuik, Stuzo Clothing, Thuy Custom Clothier and more, all curated by dapperQ’s Anita Dolce Vita. Styles ranged from Thuy’s more tailoring based range to Salt New York’s collection of elevated workwear-inspired garments as well as everything from swimwear to seemingly Girl Scout-inspired attire. Beckford’s collection investigated her idea of the “4-3-2-1,” a four piece suit made to transition from formal to business, to casual and even to play. To do so, the brand makes each piece be able to stand on its own, adding details like adorning the backs of the vests so that even without the suit jacket, they give off an individual vibe. 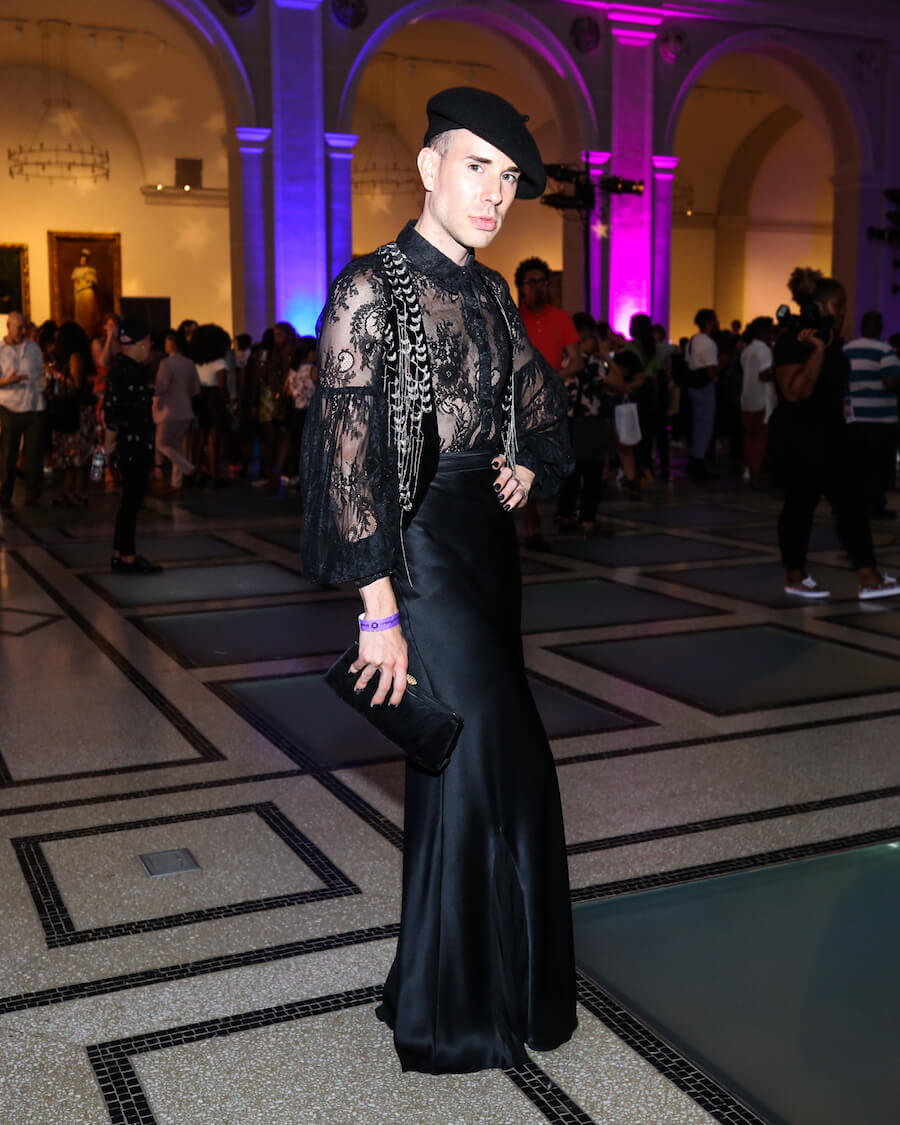 “I like to support anything that people are doing on a positive level and I really like fashion,” Freddie LaBeija, who attended the event with a few close friends celebrating his birthday, said. “So I figured why not come. I really enjoyed [all the collections] because I’m a fan of creativity.” But for many, attendance and involvement was about not just creativity, but solidarity.

“It’s super important because I feel like this gives them a chance to shine more and really show the world that the queer designers of the world, Brooklyn and our community are really making noise and they really know what they are doing,” Alex Mugler, who hosted the event and starred in season one of My House, said. “And I’m always looking for a new hot look!” His tastes veered toward the gender irreverent formalwear of Kris Harring and the monochromatic workwear of Salt.

For Salt, the new brand from Auston Björkman (he ran his own brand Sir New York) and Jessie Levandov (she had her own line of jewelry made from organic materials), every single part of their line and this “Dress Code”-themed show was important. 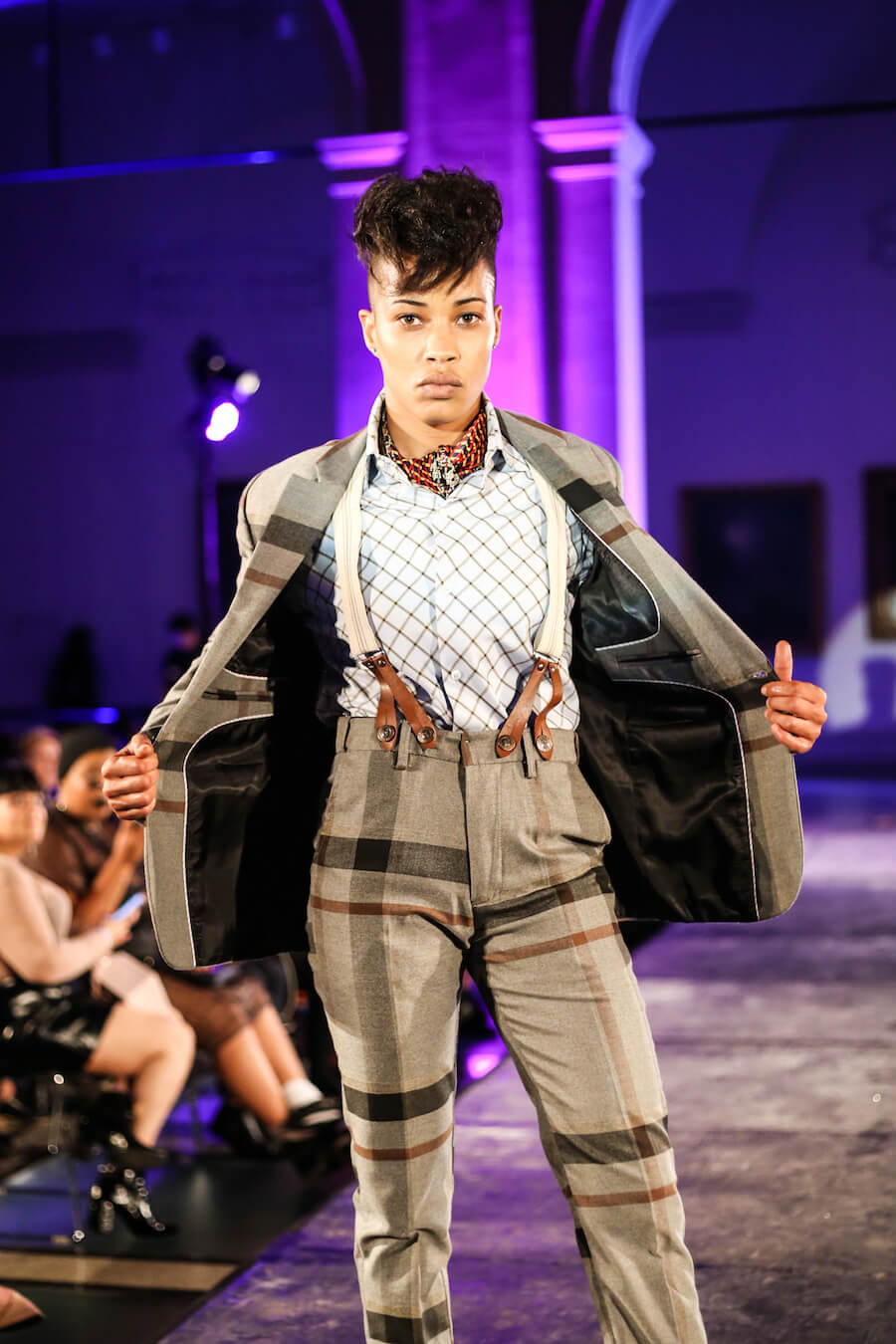 “The fashion industry is so harmful, it’s so exploitative and has historically always stolen from and exploited queer communities of color specifically, so if we’re going to be in this space [of working in fashion], it has to be in a way that’s ethical and has integrity first and foremost,” Levandov said. That mindset informs decisions like sourcing all materials in the United States as well as producing all of the pieces in Brooklyn, either by their own hands or through a partnership with a woman of color-owned factory.

The collection itself is a workwear take on uniform dressing. Pieces are loose fitting, monochromatic, no fuss and utilitarian; they are clothes you can live in, from simple t-shirts to a “tank overall” set and a bomber jacket with a plethora of pockets for stowing odds and ends. For the actual show, each model also works a hand knit head piece (some of which were actually bags) completely obscuring their faces. The tactic was used for a number of reasons: 1.) to make a statement about how fashion allows people to hide parts of themselves that they might not want to reveal and 2.) as an ode to BDSM culture and how that’s inextricably interwoven into the brand’s existence. 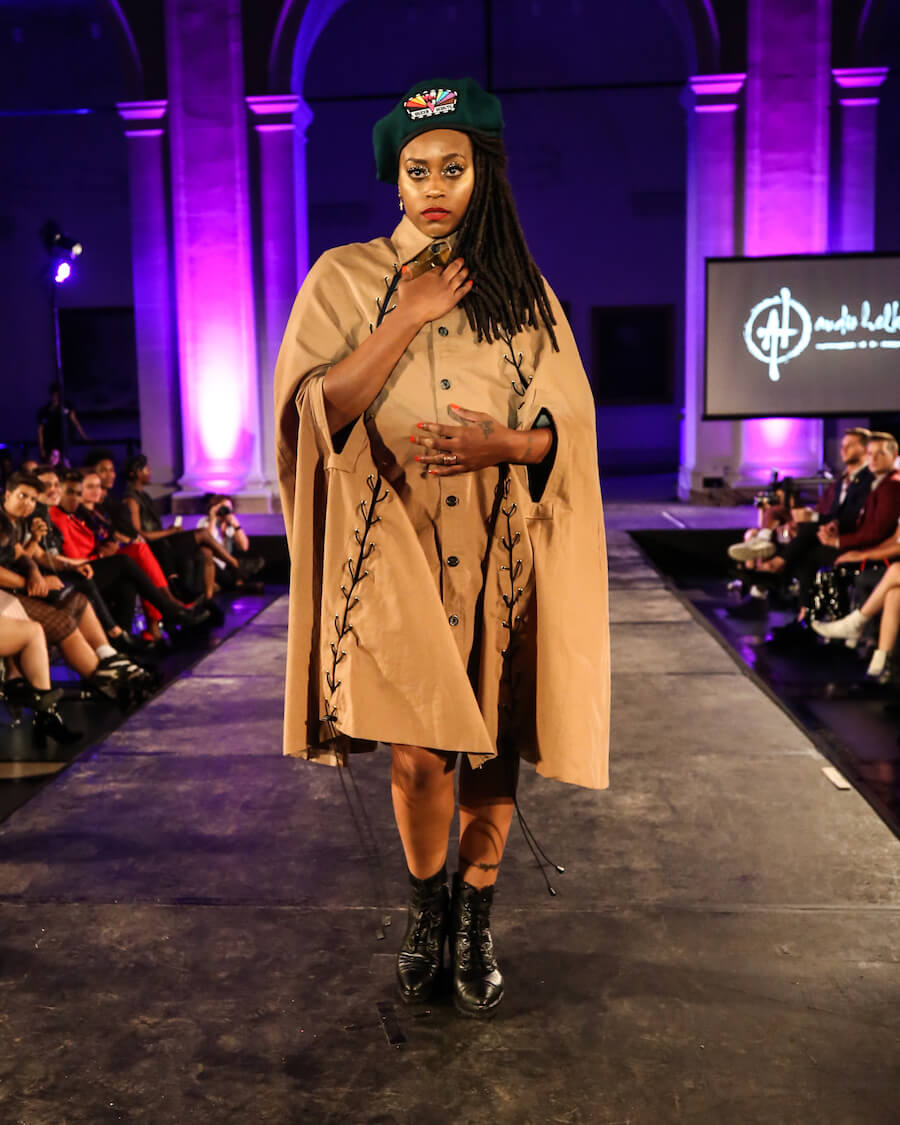 “Auston got started in the 90s as a fashion designer working for Mr. S. Leather,” Levandov explained, pointing out that Björkman improved his sewing skills designing and making deprivation hoods and puppy hoods while in that role. “So on one hand this honored that and where he came from and how he started doing this. But also, it was about the theme which was dress code.

“First of all ‘dress code’ is oppressive,” Levandov continued. “It’s about conforming to a space, acting ‘appropriately,’ and containing parts of yourself that are perverse or alien, weird, bizarre or unpalatable. We wanted to play with that. We wanted to play with what would happen if we reclaimed those parts of ourselves, the freaky, most perverted, most unacceptable, and really have your identity and your desire and your sexuality be something that’s OK and something that’s celebrated.”

It’s a brave new world — one that dapperQ is helping to usher in.

INTO was a sponsor of the 2018 Annual dapperQ fashion show.