Prior to its debut in theatres, Deadpool 2 already faced major criticism for its queer characters. Its main hero, Deadpool, was pansexual, but only nominally so. He was certainly a sexual being, but his serious romantic and sexual advances were usually reserved for women only, specifically Vanessa, his fiancee.

But fans got their hopes up again when it was announced that Lewis Tan, who should’ve played the eponymous Iron Fist in the Netflix television series, would play Shatterstar, a bisexual polyamorous superhero. However, most moviegoers’ hopes were probably dashed when Shatterstar, along with most of the rest of the X-Force, was done away with pretty quickly after his introduction in the movie’s second act. Was his bisexuality ever mentioned? No, but only because none of the X-Force characters, save super-lucky Domino, spent morethan 12 minutes or so in the film’s universe.

But there is some pretty strong queer representation in Deadpool 2. Negasonic Teenage Warhead, the punk goth X-Men team memberintroduced in the first film, has a brand new girlfriend, Yukio. Yukio is introduced nonchalantly and explicitly as Warhead’s partner, a development that other films from major studios could take a page from.

My favorite part of Deadpool 2 was how easy it was for them to make a gay superhero?? Like “Oh yeah hey this is my girlfriend” okay cool let’s go kill some bad guys. It’s not that hard @Marvel???

Marvel: “We just dunno how to put queer characters on screen. Isso hard.”

nothing but respect for MY first openly gay couple in a marvel superhero movie… negasonic and yukio are making history and i’m 187% here for it pic.twitter.com/dHswlKOrWt

Let’s all take a moment and appreciate Yukio and Negasonic Teenage Warhead aka the FIRST openly gay superheroes on the big screen! ❤️🧡💛💚💙💜 pic.twitter.com/K9Y7lQfeL7

Negasonic Teenage Warhead and Yukio are the lesbian butch/femme superhero couple we need and deserve pic.twitter.com/ALdZxV9jom

Deadpool 2 had more queer rep than any Marvel or Disney production thus far. Also, it was great. STEP YOUR SHIT UP MCU/SW

What fans responded to most was the ease with which both Negasonic and Yukio are presented. Without fanfare or explanation, the characters are just allowed to be. But the same cannot be said of its main superhero, whose sexual hijinks don’t always come off as serious or intentional. Where Deadpool presents Negasonic and Yukio with confidence, it stumbles and trips on how to treat its main character, who is a pansexual fop stuck in a movie that too often has the tone of a dudebro fart joke.

Where Deadpool presents Negasonic and Yukio with confidence, it stumbles and trips on how to treat its main character, who is a pansexual fop stuck in a movie that too often has the tone of a dudebro fart joke.

To be clear, Deadpool 2 does go much further in exploring Deadpool aka Wade Wilson’s sexual tastes. He harbors a long-standing attraction to metallic muscled X-Men team member Colossus, going so far as to grab his ass. Even Vanessa jokes from the afterlife (Hey, there was a spoiler alert!) that Deadpool and Colossus might fuck. 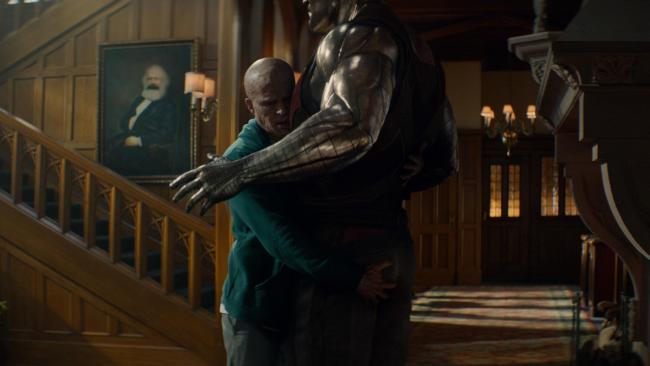 Deadpool 2 is by far the most explicitly queer outing (see what I did there?) that Marvel, and Fox, has ever produced, even counting the original, coded early 2000s X-Men franchise. But its breakneck jokes-per-second tone still hasn’t figured out how to treat Deadpool’s sexual trysts with men as seriously as it does his other sexual and romantic comments toward women. Until then, there’s always Yukio and Negasonic.