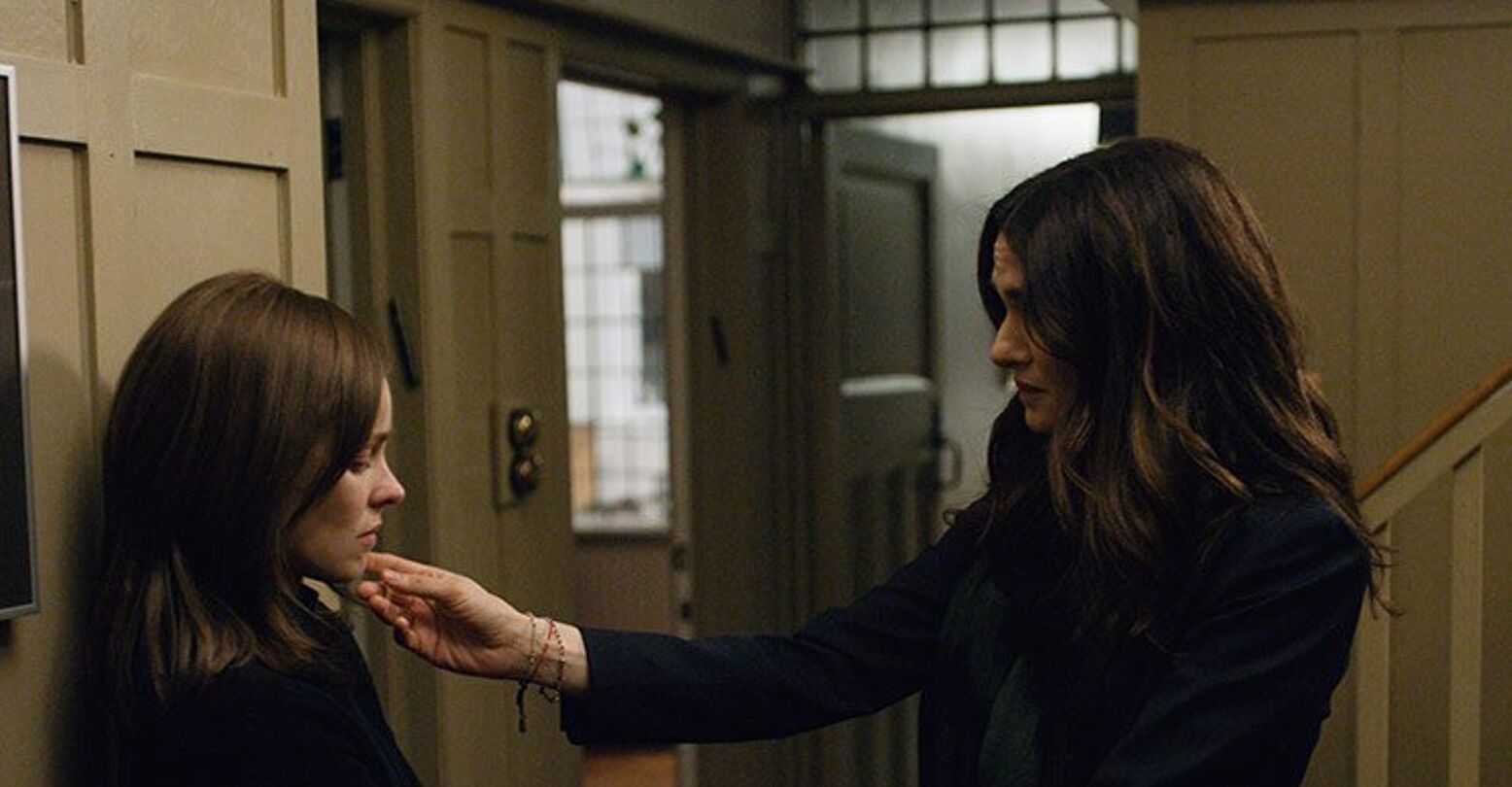 In some ways, the 2018 Sapphic-themed cinema experience is not much different from that of reading pulp novels in mid-century America. Even if said films are set in present day, the tension, the struggle, the raison d’être for a woman-woman meet cute is that the two women mustn’t and simply cannot be together because they are both WOMEN!

This is largely because of cross-cultural societal, familial, and religious expectations; a constant fear looming over lesbian-leaning protagonists who can’t find a way to be themselves wholly in a world that refuses to allow them any choice or individuality. If viewers are lucky, the story ends in eventual tortured self-acceptance; yet others result in tragedy or an inability (refusal?) for at least one of the womenaccept non-conformity.

Rare is the story that provides two queer women a chance to tell a story other than one of a struggle over one’s sexuality or attraction to another woman based solely on the fact she is a woman.

Disobedience isn’t necessarily providing anything new to the canon in its basic narrative. Based on a 2006 novel from Naomi Alderman, the film follows Ronit (Rachel Weisz), an ex-Hasidic Jew who left her London-based community for a life of freedom in New York. Ronit is a photographer (another well-trodden trope for lesbians in films, including Carol, which also altered Therese’s career from the Patricia Highsmith original) who returns home for the first time in years after her father, the Rav, has died. Those she left behind are surprised to see her, but no one is more confused than Esti (Rachel McAdams), her former best friend with whom she also had a teenage love affair. Esti is now married to Dovid, another childhood friend who was also a protege of her father’s, and suspected to become the next Rav.

Considering the trailers and promotional material highlight the two actresses kissing, it’s not quite a spoiler to say Ronit and Esti rekindle their forbidden romance. The story is not a will-they/won’t-they, but another “How will they?” set in the confines of a steadfast homophobic Ultra-Orthodox community. Ronit is struggling over the loss of her estranged father, who left her out of his obituary and subsequent will, leaving his house and possessions to the synagogue instead. Esti, perhaps selfishly, is hopeful Ronit is back not just to mourn the Rav, but to give her a reprieve from her mundane life as a dutiful wife.

In early reviews out of TIFF, where Disobedience premiered this fall, many critics focused on (what else?) the intimate moments the women (two highly-respected and recognized actresses) share, specifically their lengthy afternoon of clandestine sex in a hotel room. Juxtaposed with the cold, unfeeling monotony Esti engages in with Dovid every Friday, her untethered passion is on full display as she and Ronit ravage one another in a way that is both full of wanting but also somewhat withheld for what I can only assume is based on restrictions the actresses have aligned for themselves. Neither woman takes her shirt off, for example, nor do they penetrate one another at any time. There is an insinuation of mouths on nether regions, but the most focused on aspect of this lovemaking is when Ronit spits inside Esti’s welcoming open mouthtwice.

While there is certainly no one way to have sex (much less lesbian sex), the way in which sex between two women is shot and displayed in film is frequently scrutinized because it’s so often gotten wrong. Blue is the Warmest Color is an infamous example, with director Abdellatif Kechiche pushing the film’s heterosexual stars to shoot several positions for an extended amount of time, ultimately producing a seven-minute sex scene in which the women engulf one another fully in several different ways, the focus less on an orgasm or expression of intimacy but, instead, a smorgasbord of options. The reaction seemed split amongst actual queer women who watched, some finding it repulsive, others seeing as it as decidedly hot.

Disobedience‘s scene was set up by director Sebastián Lelio (A Fantastic Woman), Weisz tells me during a press day at the Four Seasons Hotel in Beverly Hills. She jokes that when she first hired him for the job (Weisz is a producer on the film and was the one who optioned it for the screen), she assumed he was gay based on his ability to tackle uninvestigated themes of his first film, Gloria, which as she describes, “is about a 50-year-old heterosexual woman’s sexuality.”

“An actor in film, I often ask questionsis sex in the scene really necessary?” Weisz says. “In the resect of this film and the story, the scene was not only necessary, for me it was the heart of the movie, to see these two women being uninhibited and being allowed to be alone together and express their love for each other. It was just essential.”

“That fact that Sebastian thought up these kinds of tropes and these gestures which we didn’t think upI wasn’t like ‘Oh, I really feel like spitting in Rachel McAdams’ mouth,'” Weisz says. “He storyboarded it, and he said ‘This is what will happen then,’ and nothing was a surprise. And there wasn’t actually any nudity. I mean we were unclothed, but you canthe camera wasn’t seeing it, all our bits, so it was moreit was emotional.” 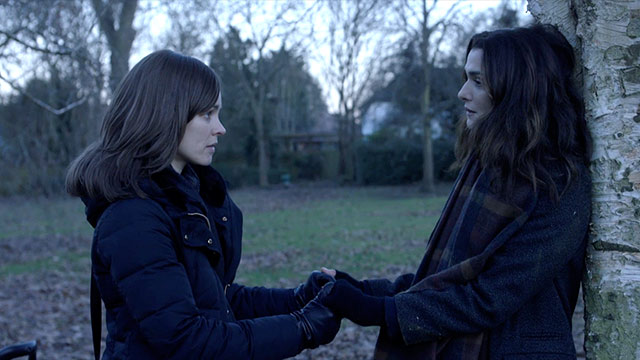 I ask Weisz, who describes Leilo as “a Catholic, Chilean, heterosexual man from a completely different culture and sensibility,” if she ever considered hiring a woman to helm Disobedience. She thinks for a moment before answering.

“The honest truth is no,” she says. “If he’d have said no, then probably I would have thought of a woman next.”

As great as Disobedience is in many ways (and it is surely worth seeing), the continual hiring of male directors for major lesbian-themed films is a frustration felt by women filmmakers seeking the opportunity to tell their own stories in Hollywood. The last few lesbian-themed films with star power and sizable budgets all had men behind them: Freeheld (Peter Sollet), Carol (Todd Haynes), Blue is the Warmest Color (Kechiche), Thelma (Joachim Trier), and The Handmaiden (Park Chan-wook). And for Disobedience, Lelio also wrote the script, though he eventually had help from out British playwright Rebecca Lenkiewicz.

“Sebastian wrote the first two drafts,” Weisz says. “English isn’t his first language. He’s fluent, but there were just kind of turns of phrases that weren’t totally English and then they collaborated together and did another three drafts. I mean, [Lenkiewicz] brought to it Englishness, and I guess a female point of view.”

This isn’t to say Leilo is incapable of writing and directing a story like Disobediencethe film is more formidable than it is flawedbut it does mean Disobedience is yet another lesbian-themed love story that is somewhat cliche in both story and execution. In today’s cultural moment of pushing for more women to be a part of Hollywood, both in front of and behind the camera, it does seem as if there was a missed opportunity, especially as the want for Weisz to tell the specific story of Disobedience was in its explicit centering of women.

“In general, there seems to be not enough stories where the woman is front and center,” Weisz says. “I wanted to find a story where it would be a woman in relation to another woman front and center, because I feel like it’s very different. I’ve seen thousands of films about men and women and enjoyed many of them, but I just feel like there’s underrepresentation of women and women’s gaze, or women’s love of women. I’m interested in films about female friendship, female love, and female sexuality.”

And women audiences are, of course, thankful for women like Weisz who utilize their power in the industry to create films such as Disobedience. However, it’s quite noticeable that a film like this, with a male director attached, has a much easier time getting funding and distribution than films directed by women. Take, for example, another film that premiered at TIFF this year: My Days Of Mercy. Starring celebrated actresses Ellen Page and Kate Mara and directed by queer Israeli filmmaker Tali Shalom-Ezer, the film still hasn’t found a distributor despite fair reviews, and is instead making the rounds at LGBTQ-specific film festivals this spring and summer. Desiree Akhavan’s The Miseducation of Cameron Post, which won the top prize at Sundance this year and stars Chloë Grace Moretz and Sasha Lane, had a delayed distribution announcement, despite rave reviews. It was eventually picked up by FilmRise, an indie film and TV distributor and recently played to more praise at Tribeca. Meanwhile the Craig William Macneill-directed Lizzie Borden-themed Lizzie, also out of Sundance, won a sizable deal with Saban Films and Roadside Attractions.

Both Mercy and Post are films that encompass a coming-of-age and sexual exploration that have also been examined before. But besides their settingsamidst capital punishment demonstrations and a conversion therapy camp, respectivelytheir characters are given more than just distress over their desires. They aren’t fated for disaster or a life of lonely spinsterhood, or an even lonelier marriage to a man who is either naive or willfully ignorant. Thankfully, Weisz wouldn’t let Disobedience dictate that same kind of fate for its heroines either.

The way lesbian stories end are so integral to their messaging, especially when the larger themes are about the struggle to enjoy their love in any capacity. Sure, it can existbut can it be sustained?

This is now officially a spoiler alert, because even if you’ve read the original novel, Disobedience deviates in its ending. I won’t reveal all of the details here, but Weisz’s comment on how the end was changed is also one that comments on the film overall.

“It was a big debate about if can you make a film in 2018 where a gay woman ends up staying married to her husband,” Weisz says. “And it doesn’t seem right, I think, is the best way to put it. [Esti’s] .. liberation into her true sexuality and the freedom to express her sexuality just seemed like a change we had to make.”

Disobedience is perhaps less about the idea of being beholden to any one other than oneself, so if there’s anything it’s bringing to the collection of lesbian cinema as created by heterosexuals, it’s a note of hopefulness in an otherwise oft-depressing genre.

Disobedience opens in theaters this Friday.