Speaking at the INTV conference on Tuesday, Fox Television Group chairman and CEO Gary Newman sparked some Buffy reboot buzz. At the conference in Israel, Newman acknowledged Fox’s most successful reboots, like The X-Files and 24, before alluding that soon, it could be Buffy’s turn.

“Joss Whedon is one of the greatest creatives we’ve ever worked with,” Newman said of the show’s influential creator. “When Joss decides its time, we’ll do it, until Joss does, we won’t.”

With the show’s 21st anniversary having just passed on March 10th, Buffy the Vampire Slayer is obviously ripe for a reboot. But the question is, do we really need it?

Maybe we don’t, but let’s talk: Buffy gave us one of the most important queer lady relationships in TV history. The show’s portrayal of Willow (Alyson Hannigan) and Tara (Amber Benson) was a trailblazing moment for LGBTQ representation, specifically lesbian women. Before Willow came out in 1998, true to form, trope-free lesbian characters were scarcely seen on TV, outside of secondary or tertiary characters, one-off storylines, or offensive, archetypal depictions.

Not only did Buffy normalize queer women as human beings, but it also showed monumental girl-on-girl kisses, that weren’t just exploitative, used for shock factor, or parlayed into being the butt of the joke (like the kiss between Rachel and her college friend on a 2001 episode of Friends). Plus, Willow was a protagonist, and the show’s decision to center queer women was significant at the time.

For these reasons, the Buffy fan base has been always been largely comprised of queer female fans. The show was important to so many queer lesbian and bi+ women who grew up in the ‘90s and early 2000s, because it was the first time pop culture said it was ok to be who we are, that our lives were valued, and had the potential to be filled with momentous joy. Buffy was a gift, so why don’t we just leave it there? 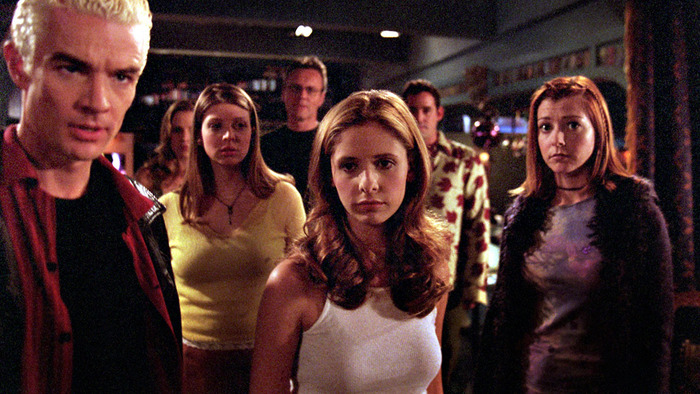 Reboots have been picked up for much lessthe second coming of American Idol just premiered this week after only two years of being off the air. And some reboots can be really exciting. The all-female remake of 1984 blockbuster hit Ghostbusters was the perfect storm for a reboot: brimming with nostalgia, ripe for a modernized version, and tweaked to reflect what life looked like 20-years after its inception. The ‘80s teen slasher movie Heathers landed a timely TV adaptation at Paramount Networktoo timely actuallythe show’s premiere was pushed back following the shooting at Marjory Stoneman-Douglas high. Charmed was recently picked up by The CW for a reboot of the 1990s Alyssa Milano, Shannen Doherty, and Holly Marie Combs starrer. Charmed was a childhood favorite of mine, and existed in the same era as Buffy, but didn’t exist in the same world.

Like Buffy, the sister-witch TV drama was groundbreaking in that it depicted and centered strong women, which was still rare for the ’90s television landscape. But it had scant LGBTQ representation, and its one-off characters were by no means the same caliber as Willow and Tara.

But the CW reboot is infusing the updated version with a queer protagonistone of the sisters, Halliwell, will now be a lesbian. So, a Charmed reboot makes senseit’s giving us nostalgia with a twinge of contemporary reflection. But Buffy the Vampire Slayer doesn’t need that. Of course it’d be fun to see what Whedon and present-day writers could stir up for a modern reboot, but Buffy was such a flagship show for its time. It was a picturesque model of what TV for female and LGBTQ fans could look like, and would look like in the future. It laid the groundwork for shows like The L Word or Orange Is The New Black.

I’m tired of reboots. We’ve seen so many bad ones, too many that made us think, “Nobody asked for this!” Even per Gary Newman’s exampleswho cares about the 24 reboot? Stuck-in-their-ways dads in flyover states? I think we can unanimously agree that the new X-Files is no match for the original.

Hollywood is drowning in its obsession with remakes, desperately grasping at the potential to invoke ’90s and early aughts nostalgia, banking on an easy win for their network, given a preexisting fan base. But sometimes we need to let the past stay in the past so as not to taint it. Have TV shows about resurrecting the dead taught us nothing? I don’t want the stitched up, half-wit, zombie-like remains of Buffy. I want the original one, with its swollen heart, flushed cheeks, warm blood, halter tops and crusty daggers wielded by Sarah Michelle Gellar.

Let’s keep Buffy in the TV museumor should I say “graveyard”where it belongs.