In the third episode of Netflix’s new Queer Eye, “Dega Don’t,” the new Fab Five Karamo Brown, Jonathan Van Ness, Antoni Porowski, Bobby Berk, and Tan France tear through a NASCAR fanatic’s house. They’re excavating what they can to set the stage for their makeover of Corey, a white cop. Because this is Georgia, and because this Queer Eye reboot isn’t afraid to get uncomfortable, we see the Fab Five find both a Make America Great Again hat in his closet and a Trump/Pence sign in his garage.

There are jokes made about the pro-Donald Trump paraphernalia. Bobby gets an aghast reaction to the hat. The boys call the garage “politically not great.” But all Corey has to say about it is that “we’re all gonna make America great again.”

Then the items, nor Trump himself, really aren’t mentioned again. Karamo and Corey get into a discussion about Black Lives Matter versus Blue Lives Matter. It’s a major emotional beat in the episode, and has clearly affected Karamo. Months after filming, he’s kept in touch with Corey, and both men walked away from their conversation changed. But said conversation wades into both-sides-ism a bit; moreover, on Trump specifically, Queer Eye provides no payoff. 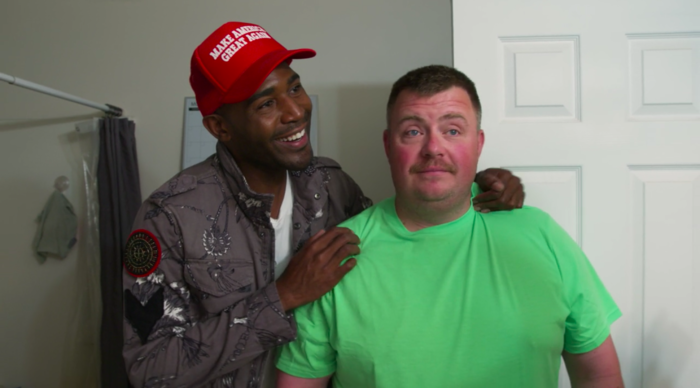 “Dega Don’t” Is a low point in what is otherwise a remarkable reboot of Queer Eye for the Straight Guy. Whereas this episode feels emotionally manipulative in moments including a staged police stop meant to startle Karamo, who’s driving the car the rest of the series is refreshing and honest. It inspires as many laughs as it does tears. It looks incredibly expensive (no small feat, considering the original Bravo show often felt built on a cable budget). Queer Eye 2.0 is, quite frankly, nothing short of a triumph.

And yet “Dega Don’t” sticks in the mind, more than some of the better installments. That’s because it’s the one episode where it feels like the show fails not in its mission to make over Corey, who looks and feels terrific by the end, but fails to live up to some greater political responsibility. Faced with a man depicted solidly pro-Trump on the show, the series doesn’t quite cross over from provocative to confrontational. It finds a problem it can’t solve with love and good vibes, and ignores it.

But does the show really have a political responsibility? Is it fair to put that burden on what is effectively a makeover show, just because it features gay men? If that is unfair, then why does Queer Eye amp up its own mission by calling it a battle for acceptance?

All of these questions suggest a broader one: What is the purpose of Queer Eye in 2018?

The criticisms of Queer Eye on a superficial level make themselves: It’s five cisgender, gay men on a show that still uses the “queer” label despite the cultural expansion of that term since the early 2000s. The focus is still ultimately on straight men, save one episode with a gay subject. Most of all, the show still feels targeted to a straight audience.

But what makes the series so refreshing is the ways in which it subverts your expectations. Yes, they’re helping mostly straight men but in the fourth episode, “To Gay or Not Too Gay,” the guys take on a gay client, AJ. The result is wonderful, an exploration of the expectations of black gay men in our culture. The episode is stunning, and gives hope that, in future seasons, there would be more exploration. Combine with the surprisingly homo-friendly touches in some cases, literal touches and you get a reboot that is much better suited for gay audiences than the original was.

The “queer” label on the show is a trickier hurdle. Unfortunately, casting an all-cisgender male Fab Five limited how the series can respond to criticisms. In a potential second season, bringing on guest advisors of some sort who represent other LGBTQ communities would be a smart play. You could even recast, although considering what strong chemistry these guys have built up, I’d understand Netflix’s reticence to do that. 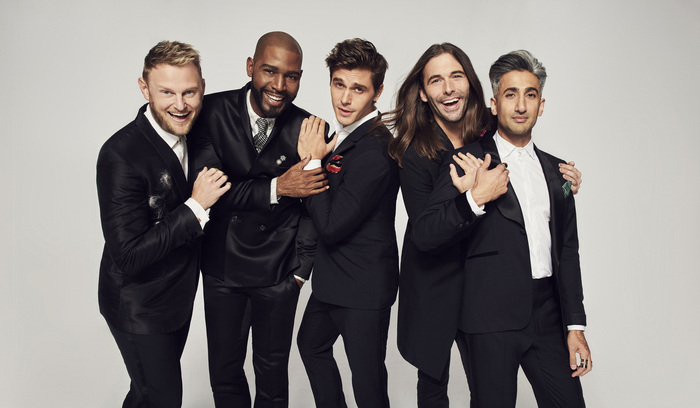 If you talk to the Fab Five themselves, as INTO did when they came into our offices the day of the series’ release, the key is in the climate. Whereas Queer Eye for the Straight Guy reigned during the George W. Bush era, Queer Eye is coming along during the even more volatile Trump administration.

“Since President Trump has been elected, there has been a very clear and present backsliding in this country,” Jonathan said during the roundtable interview. “I was home for Christmas [in rural Illinois, and] definitely had three separate incidents of ‘faggot’ being screamed at me while pumping gas. I haven’t had someone scream ‘faggot’ me from a car in a while. I think there’s never an appropriate time to tap out of having the conversation.”

Rather than work with only the most left-leaning, the show goes into the more rural parts of Georgia, meeting more conservative men (Corey is the sole subject established as a Trump voter, but he’s likely not the only one who voted for him). The show gets into uncomfortable conversations, like the Blue Lives Matter vs. Black Lives Matter discussion mentioned above, but never forces the issue.

“It comes up in a really organic way,” Antoni said. “The conversation Karamo has with Corey only happens because of the discomfort with the opening scene [the staged police stop] in that episode. Spending a whole week with these guys, those issues are gonna come up.”

So viewers get some tough conversations wrapped up in a digestible package, with makeovers and design tips and attractive men. Queer Eye is deceptively deep in that way; that’s what makes it so surprising. That may not be the strongest argument for why it’s necessary, but it’s a great argument for watching it now that it exists.

More than anything, though, the guys’ reasoning for Queer Eye’s return and relevance in 2018 is: What’s the harm? Isn’t the very presence of a show like it on an international platform like Netflix a good thing?

“Why not now?” Jonathan asked. “It’s not like Hillary [Clinton] won and everything’s going great. Why can’t we have a conversation about it? And that’s just for right here, right now. What about the missing journalist in Chechnya? There’s so much going on right now that needs this conversation to be taken globally.”

During our interview, the Fab Five were mixed on how political Queer Eye was designed to be: Bobby saying the show isn’t “politicized,” while Tan argued “the nature of this show” and what the guys represent makes it political. But it’s clear the show itself invites the greater ramifications of its existence. Within seconds of the first episode, Tan says that their “fight is for acceptance,” versus the fight for “tolerance” on the original Queer Eye for the Straight Guy. By going into the most conservative parts of Georgia, the Fab Five are making a splash in a potentially politically volatile area merely by being who they are, as Tan pointed out. Maybe there will come a day when merely being queer isn’t political, but today is not that day.

So how you receive the new Queer Eye will largely be foretold by how you respond to Corey and his MAGA support in “Dega Don’t.” Will you respond like the Fab Five themselves, with knowing skepticism (“When I would ask him why he voted for Trump, he didn’t really have a reason,” Bobby said in our interview) but ultimately give way to care for the person, not his politics? Or does the entire affair feel like normalization of someone who supported a white supremacist presidential candidate?

Queer Eye wants you to feel the love no matter your differences. And there’s certainly a lot of great, powerful, funny TV to be watched if you can. But in times like these, those differences may be too much for some people to overcome.