The fan craze around Call Me by Your Name has hit peak hype and it’s unlikely to fizzle out anytime soon. With the Academy Awards coming up, we’re all anxiously rooting for Timothée Chalamet’s Best Actor statue and the film’s Best Picture win. Meanwhile, I guess the only way to get our fix is to see it again on the big screen every day (thanks MoviePass) or to listen to Hammer narrate the audiobook with his sexy vocal skills on repeat.

Listening to the “Call Me By Your Name” soundtrack ❤️ It’s so good! *starts belligerently crying thinking about the ending* 😭 pic.twitter.com/sAr96xvEco

Or we could just go get dinner with the romantic leads and director Luca Guadagnino. No, seriously. One lucky fan will get flown out to Los Angeles to have dinner with the three on March 4, the night before the Oscars. They’ll also receive a signed copy of Call Me by Your Name.

All you have to do is donate to the film’s Omaze campaign. For as little as $10, your donation will go to The Trevor Project or The Foundation for the AIDS Monument, and you’ll be entered to win. The Trevor Project fights to end suicide among LGBTQ youth, while the Foundation for the AIDS Monument aims to raise $4.5 million for a permanent art installation that will honor the impact of AIDS on the country. 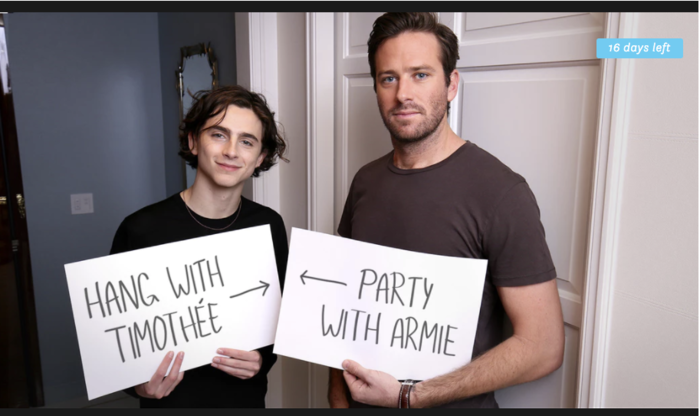 According to the video, Chalamet and Hammer are looking to get “shitfaced” with us. What better way to cheer on our favorite movie of the year? No word of whether or not peaches will be on the menu, but here’s hoping.

Donate to the Omaze campaign for your chance to win here. And watch Armie Hammer and Timothée Chalamet’s campaign video below: