It’s an hour into my interview with Carson Jones, and I’m explaining to him what a “thirst trap” is.

Carson, son of recently elected Senator Doug Jones, was the source of much excitement on the gay internet after his father beat Republican Roy Moore in the Alabama runoff election. The 22-year-old, as bloggers noted, is a zookeeper in Denver and fairly easy on the eyes. “He’s adorable, beardy, and has a great smile to boot,” wrote U.K’s Instinct magazine, along with photos pulled from his Instagram account.

“You got thirst trapped,” I tell him, a long pause signaling his unfamiliarity with the concept. “It’s when someone posts photos of themselves, often shirtless, for attention on the internet. But in this case, the internet trapped you.”

Carson is new at this. It’s his first media interview since his father, a former federal prosecutor, announced his intention to run for Jeff Sessions’ vacated Senate seat, and the first time he’s talked about his sexuality so publicly. Despite the widespread attention from the gay blogosphere, the younger Jones only came out to his parents two years ago.

It was the day that the Supreme Court legalized marriage equality in a historic June 2015 ruling, and Carson was in Australia for the summer, living and working at the Australia Zoo. The decision came down overnight because of the time difference. As he was headed to work the next day, Carson saw a rainbow on his daily drive. He kept driving and saw another rainbow, followed by yet another one after that.

After coming to terms with his sexuality during his senior year of high school, Carson believed this was a sign it was finally time to tell his parents. First he wrote down his feelings in a blog post and then he texted his mother, Louise, to read it.

His parents responded simply and promptly. “I love you,” they said.

When I asked what made him wait three years before opening up to his family about his sexuality, Carson claims that he just wasn’t ready to come out in high school. Mountain Brook, Ala. was a town as affluent as it was conservative, the kind of place where students got $60,000 BMWs on their birthdays.

“[Mountain Brook] was not a place that I would have felt comfortable coming out in,” he says. “I only know of one person who was out in my year.”

But his high school experience, Carson notes, wasn’t a typical one. Between the ages of 13 and 17, he volunteered 6,000 hours with the Birmingham Zoo. During his senior year, Carson left school almost every day to work with primates. He calls zookeeping the “love of [his] life,” as well as a “borderline obsession.”

Carson says that his parents have “always been really supportive,” but it took him time after coming out to find his place in the gay community. 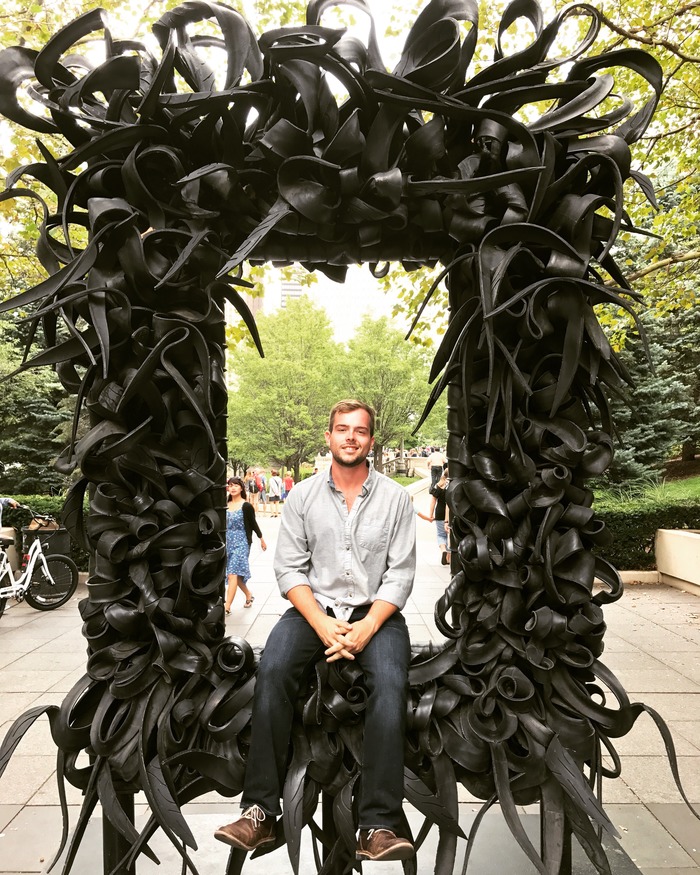 He went to college at the University of Georgia in Athens. The small town is known for a thriving indie music scene, which gave birth to bands like R.E.M. and The-B52s, but one of the things it doesn’t have is a full-time gay bar. When Birmingham’s Pride festival came around in 2016, the first full summer Carson was a proudly out gay man, he had other commitments.

But the timing of Carson’s first Pride couldn’t have been more momentous.

Following Donald Trump’s election to the presidency, many cities around the countrylike Los Angeles and Washington, D.C.eschewed their yearly parades in favor of a protest of the current administration. Since taking office in January, the White House has persistently attempted to roll back LGBTQ rights, whether it’s data collection on queer and trans elders or transgender people serving openly in the military.

Carson cried on election night as Trump’s win was announced, terrified of what it would mean for LGBTQ people like him. “I really scared and really afraid,” he says.

But at this year’s Pride in Denver, he didn’t feel fear. He experienced an outpouring of love and solidarity. “Before then, I had never felt that I needed a community around me,” he claims. “I had friends, I was great, and I was happy. But I moved to Denver and met more gay people and have more gay friends. I yearn for that community now.”

The 63-year-old prevailed by 1.5 percentage points on Tuesday over his Republican opponent, making him the first Alabama Democrat elected to the Senate in 25 years. The elder Jones trailed by as many as double digits in the special election prior to November, when nine women came forward to accuse Moore of sexual misconduct.

I asked Carson Jones when he knew that his father could win.

Carson says that he knew a little earlier than everyone else. It was election night and his grandmother was despondent. Early returns showed Moore with a comfortable lead. With 50 percent of the vote already in, the Jones campaign trailed by around 30,000 or 40,000 votes. “It looks like we’re going home,” his grandmother sighed.

The tipping point came later in the race, when the totals for more populous counties like Jefferson and Baldwin went for Jones. His victory was buoyed by historic turnout among the minority populations who would have been most impacted by Moore’s win, particularly women of color. Ninety-eight percent of black women who turned out to the polls on Tuesday cast their ballot for Jones.

“These are groups that have been really disenfranchised by the system and by politics in the state,” Carson says, citing the state’s history of voter suppression. “They were able to galvanize voters and get people energized. We can’t thank them enough.”

Carson adds that people of color “recognized early on” in the race that Moore would not be an ally to their communities. During a campaign stop in September, the conservative was asked by a black voter in Alabama when he feels America was at its greatest. The 70-year-old cited the antebellum South, prior to the Civil War.

“I think it was great at the time when families were unitedeven though we had slaverythey cared for one another,” he responded. “Our families were strong, our country had a direction.”

Moore also told a conservative talk radio program in 2011 that he would abolish all of the amendments following the Bill of Rights, claiming that it would “eliminate many problems” in the U.S. government. Such a move, however, would nullify the 13th and 14th Amendments to the Constitution, making slavery legal. It would also repeal Women’s Suffrage, enumerated in the 19th Amendment.

The Republican’s divisiveness was apparent throughout the race, Carson says.

His mother, he claims, would get upset watching advertisements for Moore’s campaign, which claimed that he was a candidate for “real Alabama voters.” “Who are real Alabama voters?” Louise Jones wanted to know.

“At the end of the day, we didn’t believe that was the real Alabama,” he adds in our interview. “We thought it was people of all colors, all faiths, and all orientations. We ran a campaign that focused on inclusion.”

The need for a campaign focused around diversity and unity hit home for the Jones team the night that Moore won the GOP nominationupsetting his opponent, former Alabama Attorney General Luther Strange. Strange was a favorite of the Republican establishment, backed by Trump and Senate Majority Leader Mitch McConnell.

Moore beat him by almost 10 points.

“When Roy Moore won on primary night, I think we felt such an incredible sense of responsibility,” Carson says. “We had staffers who were part of our campaign who were LGBTQ or part of different minority groups, and they were crying. And I think it galvanized us to reach out to those groups, not to get their votes but to say that we cared about them.”

The far-right conservative’s extremist politics are well-known in Alabama, Carson says. Moore was removed from the Alabama Supreme Court twice, most recently for attempting to block same-sex marriages in the state. As a circuit court judge, he attempted to prevent a lesbian mother from visitation rights to her kids, claiming her “minor children will be detrimentally affected by [her] present lifestyle.”

The Republican also believes that homosexuality should be illegal, wasn’t sure if LGBTQ people should face the death penalty, compared same-sex marriage to slavery, and blamed the gay community for the Sept. 11 attacks.

Carson believes it was important for the state to send a clear message repudiating homophobia and bigotry on Dec. 12 by voting against hate.

“This is a state that has a really, really dark history,” he says. “My dad has talked about the fact that Alabama has come to a crossroads so many times, and so many times we’ve taken the wrong path. It’s set us back and made us the laughingstock of the country. And we took the right path this time.”

Although he lives 1,400 miles away in Colorado, Carson believes his home state is changingand that it can continue to evolve.

On the evening before the election, peanut farmer Nathan Mathis protested a Roy Moore rally on behalf of his lesbian daughter, Patti, who took her own life in 1995. Mathis claimed in a video that later went viral he used to be anti-gay himself, saying he encouraged his daughter to undergo conversion therapy to “fix” her same-sex desires. That practice, which has been condemned by every leading medical association, has been likened to torture.

Now Mathis believes people like Moore are the problem.

“Judge Roy Moore called my daughter Patti Sue Mathis a pervert because she was gay,” read a sign Mathis brought with him Monday night. “A 32-year-old Roy Moore dated teenage girls ages 14 to 17. So that makes him a pervert of the worst kind.”

“Beliefs can change,” Carson says. “He shows you the strides we can make. It may not happen as fast as we would like, but we’ll get there.”

Even in the four years since he graduated high school, Carson believes that things have improved for LGBTQ people back home. Although he only knew one out student in Mountain Brook, many more have come out since. The high school now has a gay-straight alliance.

The city of Birmingham even opened its first leather bar last year.

Carson has witnessed this progress in his own life. Last summer, he was seeing someone in Denver, and one day while walking down the street, they locked hands. Growing up in a conservative area, being able to express affection in public was not a freedom to which Carson was accustomed. He pulled away for a second before his date looked at him and said, “You’re fine. This is fine now.”

“It’s little moments like that which tell me that things are getting better,” Carson says. “That’s what I have to believe. And after the results on Tuesday, I don’t just believe itI know it.”