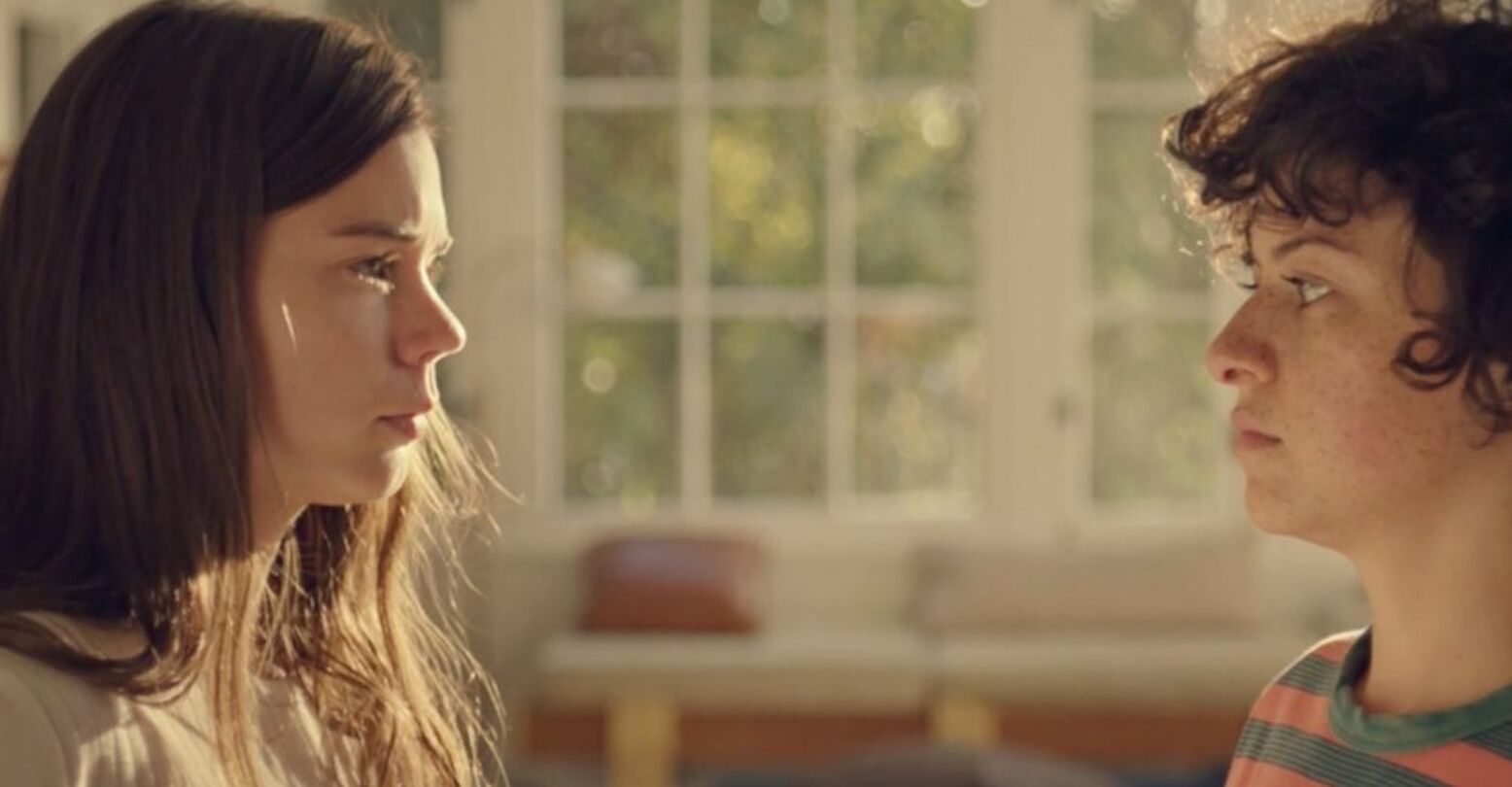 Here’s what’s revolutionary about Duck Butter to begin with: The lesbians at the center are already lesbians.

The new film, which opened in select theaters this past weekend and comes to VOD in May, is not a coming-of-age for one or two young, questioning queer women unclear about her own sexual identity. That part is out of the way already, and not even part of the conversations had between the central lesbian characters who are the only characters on screen for most of the movie.

The premise is, instead, one revolving around an intimate connection, and how an immediate emotional response to another person can lead to self-revelations within the matter of mere hours. For two women, this is especially trueso much so that it’s become a stereotype for the Sapphic set. Lesbians are said to move quickly; to partner up and settle down with an insistence that an instant strong connection surely must make for kismeta fated pairing of souls.

So when in-her-head actress Naima (Alia Shawkat) meets the enigmatic artist Sergio (Laia Costa) at a Los Angeles music venue, a shared physical attraction has them going back to Sergio’s house to create impromptu songs around a fire with friends. Then it’s just the two of them, alone, sharing ideas on about fearlessness, and eventually, caressing and undressing one another, careful and hungry in their first kisses. Their fucking is filled with hands in mouths and on each other’s faces, among other places, and a passion often reserved for a long-time lover. Afterward, they go to the kitchen to eat chips and drink some juice, and Sergio mentions she feels as if she wasted time with her ex, waiting three long years before she knew everything about her, before things combusted. 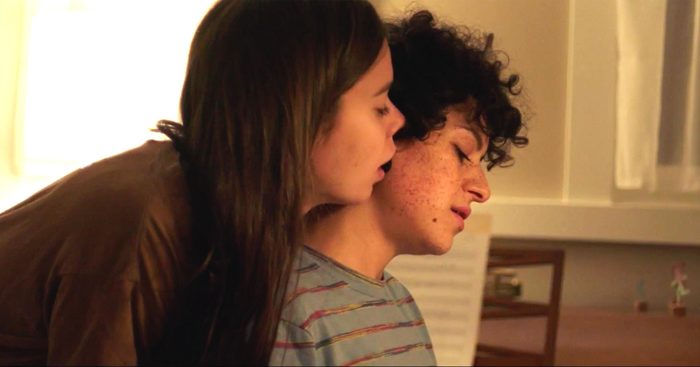 If only, Sergio laments, things could move faster. If the fun moments could be capitalized on, moments like the one they are experiencing right then.

“We should do this for, like, 24 hours straight,” Naima jokes, but Sergio is instantly dedicated to making the idea a reality.

Naima initially says noshe’s booked the biggest job she’s had so far, and so she has to turn Sergio down in order to prepare. Sergio is visibly hurt, but says “Next time.” But the following day, Naima is let go from the filmthe Duplass Brothers playing fictional versions of themselves replaced Naima with a different actress. The only thing that is keeping her from depression is returning to Sergio, with a plan of having sex every hour on the hour for 24 hours.

“We had offered her a smaller role and she wanted to be a part of the 24-hour sequence and just through Skyping with her, we realized that she was more right for the role than any guy we had met,” Shawkat tells INTO. “And it also just solved a lot of out problems as a screenplay. Like literally the logistics of a guy cumming that many times or you knowor even just seeing a guy naked. It’s like we didn’t want the idea of showing a penis in a close up seems aggressive, and the whole point of the story originally wasit was about two people, and wanting to focus on that instead of men and women are different.”

Switching the film to be about how two women relate to each other emotionally and physically radically changed the film, but not in the way that lesbianism itself became central.The story was still about how to individuals come to relate to one another both instantly and over time; how pre-conceived notions or initial assumptions can deceive you, but not always in a negative way. It’s about seeing the person, not the idea of the person, and certainly not who they are specifically as it relates to their sexual or gender identity.

“They are lesbians but it’s not even about that,” Shawkat says. “It doesn’t really talk about their coming out or how long they’ve been out or how their parents reacted to their coming out or any of that, or how society responded, so maybe it does fall into some stereotypes, but it was more just like how two people fall that way together. We just wanted to really keep it focused on that, and not placing an identity on their sexuality too much. And even the sex itself being like not this idea of what lesbian sex is or has been show in film before, just being like this is just how these two people are connecting to it. Like ideally, you just forget that they’re lesbians or whatever. It’s about them.”

And that’s what makes Duck Butter one of the better lesbian films that has been made in the last decade. The women’s attraction to one another is already establishedit’s not something to come to terms with or overcome. Instead, in the vein of 24-hour love stories like Before Sunrise but with elevated elements of mumblecore, Duck Butter delves deep into the ways two women can fall together and apart as they learn more about each other. And because the film’s 24-hour sequence was shot in 24 hours, the sleeplessness was real, as was the amount of time the actresses spent together in such close quarters.

“We had to really just go off of instinct. We couldn’t overthink things, which ended up being one of the most fun parts about it, but also the most challenging,” Shawkat says, telling INTO they worked from a detailed outline and blocked out the specific beats.

And when it comes to the sex (because, of course, this film is very sexy but not oversaturated or bordering on pornographic), the scenes are not only different every time, taking place in a different part of the house and in different positions and postures, but with a new emotion every timea new conversation being had by their bodies. What the women don’t say to one another says just as much as what they do–close-ups on their facial expressions are plentiful and allow for considerable amounts of consternation on Naima’s behalf. She’s clearly not as invested in Sergio as Sergio is in her, Sergio’s intensity and passion and want for truth turning into a boundary-less relationship that has her literally bringing out all of her shit.

“Miguel and I came up with it,” Shawkat says of the scene in which Sergio forces Naima to look at her shit. “We thought a really good way of expressing what would push someone to a limit and what one person might think this is a way to get you to say the truth, like what is the craziest thing you can do to be like literally ‘Look at my shit’? Like what the fuck, you know? ‘Look at my stuff.'”

She said that’s where the idea for the title came from, too. (In its most banal definition, duck butter is a phrase in reference to the sweat and other substances that gather near the genitals during and after sex.)

“It’s like ‘Look at the gross sides of me,'” Shawkat says. “‘You said you would accept it and you lied to me. You said you wanted to see!’ But then, is that for real? Just because you’re showing me your shit doesn’t mean it’s the most honest thing about you. That’s just too extreme.”

These ideas aren’t exclusive to lesbian relationships, but perhaps they are best illustrated by them. As the joke goes (one Shawkat is well aware of), lesbians bring a U-Haul to the second date. Whatever the reason two women have for placing more emphasis and meaning into their relationships early onscarcity? Estrogen? Strong emotions accompanied by optimism?there are rarely honest depictions of them on film in the way that Duck Butter accomplishes. The narrative is neither a condemnation nor a cosign; rather, it asks viewers to consider how and when they truly know someone, and what amount of shit are they willing to look at before bowing out? Before the sex stops? Before the realities of the day-to-day and the love and sex object becomes a fully-realized person in front of your very eyes?

And by films like Duck Butter being less about “LESBIANS” and more about people who happen to be lesbians and that lesbianism informing the story but not being the story, more accurate films about womenincluding queer womencan be made. Women like Shawkat, who has been working in film and television for more than a decade, is actively part of that changeDuck Butter is the first film she’s written, but it won’t be the last.

Duck Butteris in select theaters now and available on VOD May 1.