Élite, the Spanish teen drama that’s been compared favorably to shows like Gossip Girl, hit Netflix back in October. Produced by Zeta Producciones — giving the company a 100% on Rotten Tomatoes for its very first series — Élite features plenty of classic teen show tropes, from slow-motion kisses, epic school brawls, and parents who just don’t understand, to drug use, date rape, and teen pregnancy. The show manages to avoid the feeling of an after-school special, and remains both sexy and thought-provoking. Élite is especially thoughtful, however, when it comes to representing living with HIV.

The story, packed with a huge ensemble cast, follows three impoverished students who are given scholarships to attend an upscale private school after their local school collapses. Most of the rich kids are offended by their presence. They make sure the poor kids remember their status. One manic pixie dream girl, Marina, embraces the new kids because she, too, knows what it feels to be an outsider.

Marina contracted HIV with a sexual partner a year before the story begins. Her brother and his friends beat her boyfriend until he nearly died. Élite‘s writing team has done an excellent job of removing a lot of the stigma surrounding STI’s: Marina works hard to take care of her body, is on meds, attends therapy, and gets regular blood tests to ensure that the infection is undetectable. She gets tested regularly, and knows she has a low chance of passing the disease to any of her sexual partners.

Her family, however, views her disease as a death sentence; if not from life, then from the social elite. Though Marina is adamant that the sex she had when she contracted the disease was consensual, her family is insistent that she was drugged and raped. When she tries to discuss her feelings on what happened, they shut her down. Embarrassed by her need to understand what’s happening to her, they label Marina crazy and avoid her.

When it began in the United States, the HIV and AIDS crisis was ignored by both the government and greater culture. Early contractors were forced to live on the fringe of society. Shame, judgment, and isolation awaited early carriers. Most pop culture references to HIV showcase this era of the disease — films like Philadelphia, Dallas Buyers Club, and Gia.

In television, HIV+ representation is often limited to guest roles on hospital procedurals. The best representation of positive characters is currently happening on FX’s Pose. Set in the mid-’80s, the show doesn’t lean heavily on despair and death. Instead, survival, friendship, and prevention are the heart of the story.

But Pose isn’t a teen drama, though there are certainly elements of the genre throughout the show. While everyone needs to be practicing safe sex, educating and informing teens early is the best way to prevent further transmission. That’s exactly what Élite does: It encourages teens to educate themselves.

The internet can remove a lot of second-hand embarrassment when trying to understand the ramifications of HIV. Marina’s crush, Samuel, is dedicated to learning everything he can to be a good boyfriend to Marina. When they consummate their relationship, they are both informed and safe.

Stateside, contributing factors for the rise in STDs include lack of sexual education, doctors see patients without asking them if they’d like to be tested, and patients tend not to ask for the tests. Therefore, many carriers go undiagnosed for years and continue to spread the disease. Worst of all, federal funding for education programs and STD prevention have decreased by 40% over the last fifteen years.

Of course, there are many potential complications that follow unsafe sex. Sexually transmitted diseases are on the rise globally. According to the executive director of the National Coalition of STD Directors, David Harvey, “The United States continues to have the highest STD rates in the industrialized world. We are in the midst of an absolute STD public health crisis in this country. It’s a crisis that has been in the making for years.”

The last scripted teen drama that explored stories of HIV characters was A Different World in 1991. Since then, safe sex lessons are told through accidental pregnancy. Frequently, women receive the brunt of the punishment for shared transgressions. Entire shows like The Secret Life of the American Teenager predicate on that punishment.

Unfortunately, Marina suffers the same punishment. She has unprotected sex with Samuel’s brother, Nano. Isolated and reckless, Marina falls in love with both brothers. Élite never slut shames Marina for her decision, though. If her family had been willing to listen to her, she wouldn’t have felt the need to search for love in all the wrong places. The escape drugs provided wouldn’t have been so alluring. Love could have led Marina back home.

Instead, when Marina discovers she’s pregnant, she decides to run away with Nano. They plan to run away to Morocco and live by the sea. Though it sounds romantic, Marina is sixteen and Nano is at least in his early 20s. Nano aggressively pursues her and encourages her to leave everything she knows. Once again, isolation pushes Marina into dangerous situations.

She doesn’t make it to Morocco. Marina is murdered in the high school. She becomes another victim of an insecure and wounded man. There’s no resolution of her death. That will have to wait until season 2. 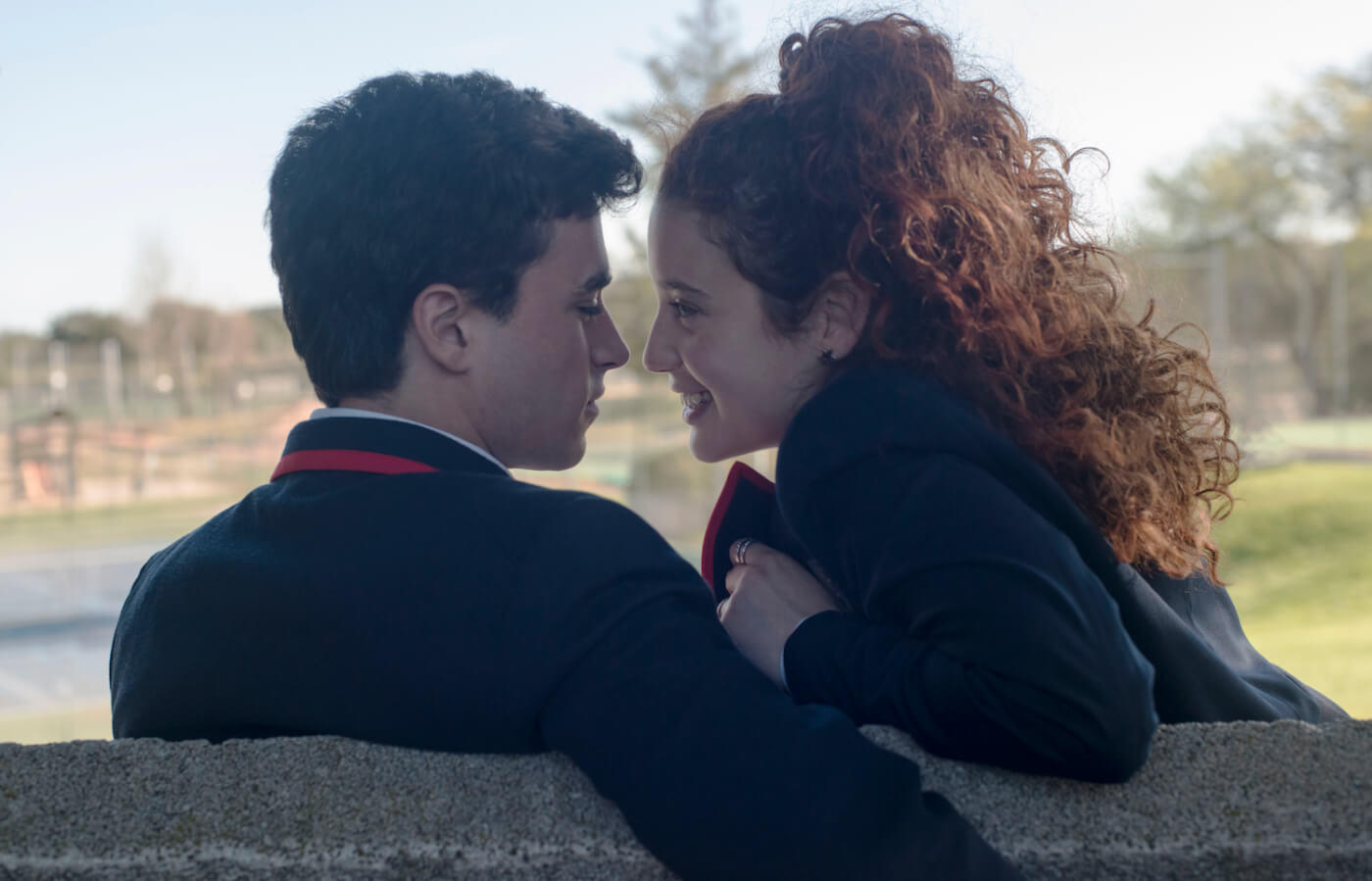 While Marina’s death is devastating, she chose to live her life fearlessly. Three times throughout the show, Marina reveals her positive status. The first time Marina tells Samuel as they work on a group project. Marina tells Samuel hoping it will drive him away. On a subconscious level, she believes she’s bad for him. But Samuel is unphased. He loves her and wants to know how to make it work.

Distressed at his reaction to Marina’s status, Samuel tells his brother Nano. What Samuel doesn’t know, of course, is that Nano drunkenly slept with Marina without reaction. Nano drives to Marina’s house and demands to know why she didn’t tell him herself. He says he doesn’t care, but the response isn’t exactly comforting. Marina repeats that the HIV is undetectable.

The final time Marina comes out is in the middle of class. Desperate to talk to Marina, Samuel sends her a text message that includes her status. When he’s caught with his phone out during class, the instructor forces Samuel to read the message out loud. The air evaporates from the classroom. Silently, judgment and disgust bombard Marina in the claustrophobic classroom. The little bit of privacy and control vanishes in an instant.

Marina pushes herself up from her desk and addresses her class. “I was infected a year ago,” she begins. “I suppose people are going to talk about this. I just think you should know all of the facts before you do.” Her voice wavers as she repeats the same facts she’s told every single person who learns of her status.

Her exhaustion is palpable. It’s not the HIV that wears Marina down, it’s a lack of understanding. Even Nadia, a Muslim classmate exhausted by the judgment she receives at school and home, is initially disgusted when she learns of Marina’s status. Later, Nadia admits that she simply hadn’t ever been around someone who was HIV positive. Her ignorance scared her. Ignorance alienated Marina from everyone who wanted to love her. The best thing viewers can take away from Élite is to get to know someone with HIV. It’s not a death sentence, and when managed carefully, there isn’t anything to fear.