When I first met Emily Rios in 2014, it was for an interview about her Mexican lesbian reporter character on FX’s short-lived drama The Bridge. As we sat together on a couch during the Television Critics Press tour, she came out in such a matter-of-fact way that I was sure the surprise registered on my face. After years of interviewing actors about playing LGBTQ roles and having so many of them — gay and straight — downplay queerness relating to both their characters and themselves, I had one come out not just to me, but to the public for the first time.

“I’m gay, personally, so being Mexican and a lesbian — this is why I love the character because I deal with the same type of things with my own family,” Rios told me in that interview. “Mexican-Americans especially — because this generation, we come into America and your family wants to be proud. You want to come to this country and say ‘This is what I have to show for it. I brought my family and we’re living our better life.’ For my family, my mom didn’t want me to live a difficult life. She brought me here for a better one so she’s like ‘Your coming out…I don’t want this to be this. I want you to be comfortable.’”

And despite the pervasive idea that coming out in Hollywood can be a career killer — especially if you are further marginalized as a person of color — four years later, Rios is flourishing. She had a memorable appearance on Scandal as a rape survivor; a significant arc on True Detective; a major role in From Dusk Till Dawn: The Series; and leads FX’s series from John Singleton, Snowfall, now in its second season and readying its third. But this week, she’ll be back on the big screen where she got her start as a young teen in Richard Glatzer and Wash Westmoreland’s Quinceañera. In Barry Jenkins’ If Beale Street Could Talk, Rios plays a pivotal part that keeps her largely off-screen until one of the film’s most talked about scenes, which she shares with Regina King. 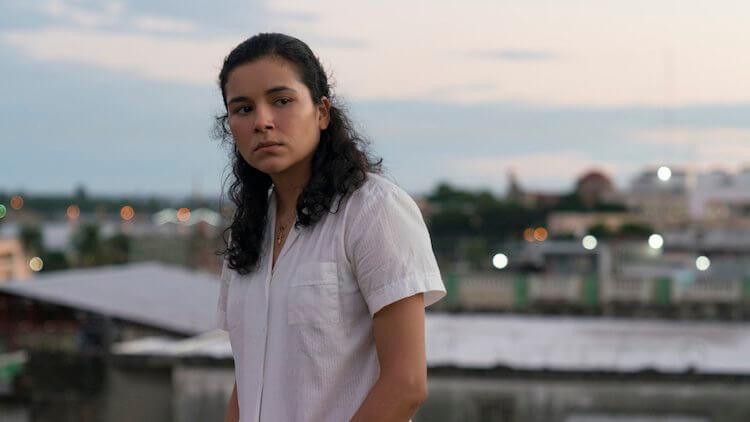 As Victoria Rogers, Rios plays a young woman who accuses Alonzo ‘Fonny’ Hunt (Stephan James) of raping her. King is Sharon Rivers, the mother of Tish Rivers (Kiki Lane), who is engaged to Fonny, and convinced Victoria is mistaken. The film is largely a love story between Fonny and Tish and their surrounding families, but as Victoria, Rios’s presence looms, asking viewers to question their own assumptions and accusations throughout.

“I like that she’s not shown until the very end,” Rios tells me. “It’s told from the perspective of [Tish] so you have to see her story, and I just happen to be something that happens in between. And so I like that everybody is sort of anticipating seeing this character and what happens and when Sharon finally goes to Puerto Rico to go and visit her. I like not being a part of it and still being still a major role.”

“What Barry did come up to me and tell me in New York was that it could have been a 15-minute scene and he broke it down to like seven minutes or something,” Rios continues. “He said it was just too heavy. Everybody watching it said it changed the film. So it was a lot for people to deal with, with my particular scene, so he cut it a lot shorter than what he was hoping for. I mean, that doesn’t hurt my feelings or I don’t take it personally, you know. I understand it changes everything.”

If Beale Street Could Talk is based on a James Baldwin novel published in 1974, but the subject matter couldn’t be more prescient. Rios found the film to be perfectly timed alongside the emergence of the Me Too movement and conversations around women working through their trauma.

“I thought what a great opportunity to be able to bring that onto film,” Rios says, “and if people have any — if they felt anything of what these victims feel, and the way I felt when reading it and reading about it, then it’s a great opportunity to bring that to light. As opposed to just hearing the stories,  to see somebody’s facial expressions, to see somebody’s emotion behind it — and then maybe there would be a little bit more empathy toward it.”

Rios doesn’t know how she got selected for her role — she still doesn’t have a clue — but she sees it as a kind of validation.

“I got a call one day and they said I had an offer. I didn’t have to audition and that was fucking huge for me,” she said. “I didn’t even know it was going on, otherwise I would have been upset that I didn’t get a call to audition.” Rios laughs. “So I honestly don’t know what happened. I don’t know how I got to this point in my career where that could happen, especially on such a big job like this. I’m just extremely grateful. I didn’t know that I had built up a resume…that somebody [would] trust that I could pull this off without having come in and taped for it.” 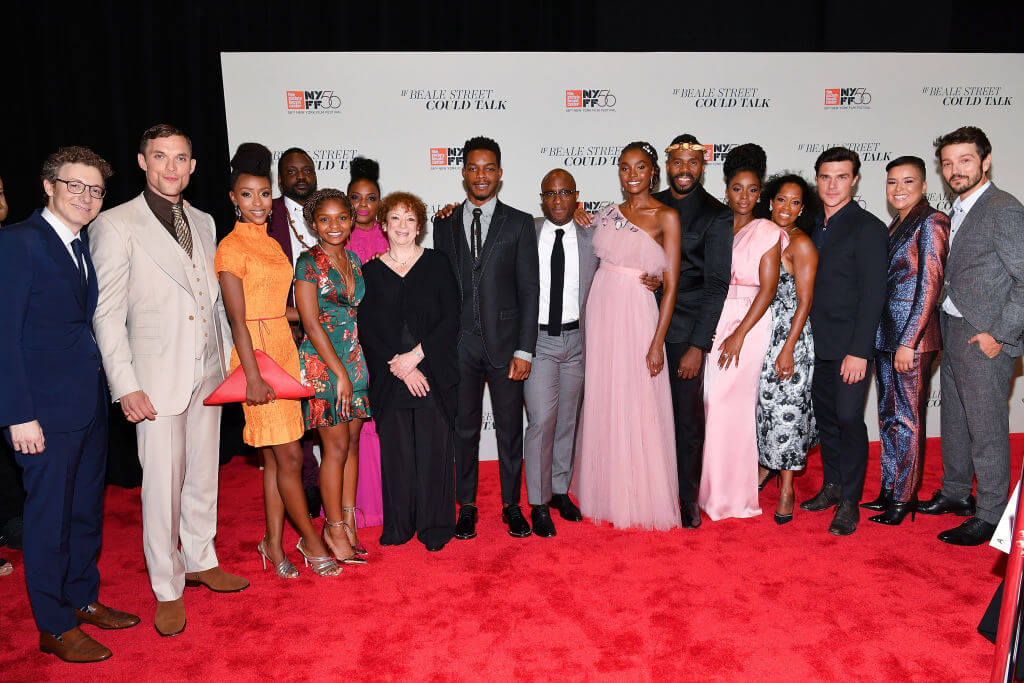 With Beale Street getting major awards season buzz, it’s likely she’ll be getting even more calls soon. She could be busy, though — she’s got a full-time gig with Snowfall, where she plays Lucia Villanueva, the ruthless and violent daughter of a Mexican crime boss who decides to start her own crack cocaine ring in 1980s Los Angeles.

“I reread one of the interviews I did with you last year and I got sick and I wasn’t feeling well after because it’s such a dark show,” she says, recalling a chat we had at the beginning of Snowfall for Vogue. “I still have the same sentiment. It’s still very heavy but I agree that these are jobs, that we give a right arm and leg to be a part of something like this, and that is a lot of fun. But just for actors out there, it does take a lot, you know? It takes a toll on the soul a little bit but it is something that I’ve always wanted to do, so it is fun but…I don’t want to watch. Once you go home, it’s best to just leave it on set.”

And even though she’s playing the kind of roles more people want to see afforded to people like her on television, Rios not only doesn’t watch television, but she refuses to watch herself in anything at all.

“I think midway through The Bridge I stopped watching myself, so I haven’t seen a single episode of the second season. I hadn’t seen anything of Snowfall. I haven’t seen myself in a few years now,” she says.

She was able to see most of Beale Street, though — “I watched the film but I walked out during my part, so I haven’t seen that portion of the film,” Rios says, noting she’s “way too critical.”

“There’s certain things where I don’t feel it’s my best take or my best work and so if I feel like I got what I wanted out of this, and that’s all I need, then I need to learn how to let go and not take it home with me,” she says.

But the rest of the film, she says, “exceeded her expectations”: “I thought it was the most beautiful thing I’d seen in the last few years.”

Rios will likely be hitting a lot of red carpets in the next few months, and when she does, she’ll be doing it with a new short haircut, a decidedly more androgynous style that she says she was a little nervous about, but ultimately decided she needed to make herself happy.

“I was actually afraid I was going to get in a lot of trouble for it, but I just couldn’t deal with it anymore,” she says, “so I cut it all off.” 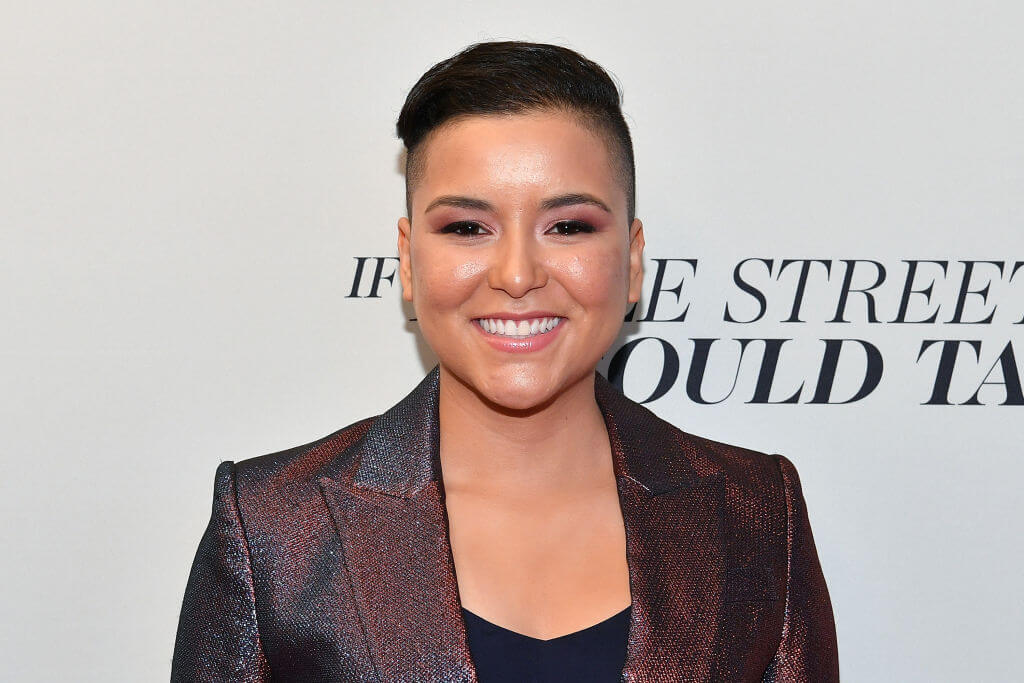 Rios tells me she’s more than game to play another queer role in the future, that she’d love to do something of her own that represents more of who she is, and the communities she belongs to.

If Beale Street Could Talk is in select theaters now.