“Reflecting on the past six years since we started on X-Factor, we’ve realized just how far we’ve come and we appreciate everything so much, more now than ever,” the four women wrote. “We’ve really had one hell of a memorable journey together and can’t begin to express our gratitude to y’all for coming along with us on this wild ride!”

The group, which consists of Lauren Jauregui, Dinah Jane, Normani Kordei, and Ally Brooke, has been together for six years since being placed together on The X Factor in 2012. An initial tear ripped through the girl group in December of 2016 when its fifth original member, Camila Cabello, exited to pursue a solo career.

“After six years going hard, non stop, we also realized that in order to stay authentic to ourselves and to you, we do need to take some time for now to go on a hiatus from Fifth harmony in order to pursue solo endeavors,” the group said. “We are all very excited and grateful to be able to take this time to learn and grow creatively and really find our footing as individuals. In doing this, we are all allowing ourselves to gain new experiences, strengths and perspectives that we can bring back to our Fifth Harmony family.”

Over the past year, the four remaining members have all begun releasing solo music while remaining in the group. Jauregui released two singles with Halsey and Steve Aoki, respectively, and a featured vocal on a Marion Hill song. “Strangers,” the Halsey collaboration, was a groundbreaking love song in which both singers spoke of another woman, using “she/her” pronouns. Both Jauregui and Halsey are bisexual, and their queer female fans were ecstatic to hear an overtly queer pop songa real rarity. 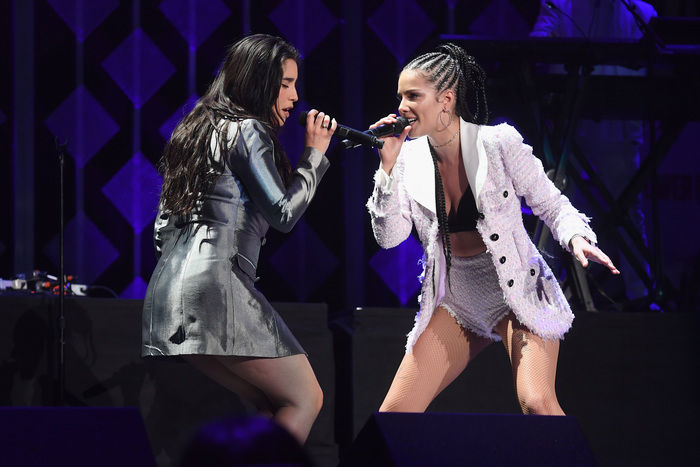 Kordei put out an R track with Khalid last month. Brooke joined Topic on the song “Perfect,” and provided vocals on a Lost Kings song called “Look At Us Now.” And in October, Dinah Jane appeared on “Boom Boom” with Daddy Yankee, French Montana, and producer RedOne. Jauregui, Brooke, and Jane are all signed individually with Fifth Harmony manager Larry Rudolph, but Kordei is managed by Brandon Silverstein of S10, who announced a partnership with Roc Nation earlier this month.

Variety reports that a source close to the group says the split is amicable, or in their words“no disharmony.” The source insists the women are all still best friends.

Fans launched the hashtag #ThankYouFifthHarmony Monday morning, expressing a melancholy combination of mourning and being proud of the girl group.

As of right now, the end of said hiatus has yet to be defined. But the group announced upcoming tour dates in May that will remain intacttheir last performances together for awhile, apparently. “

We do have some upcoming shows through the end of the year which will still happen as planned,” they said on social media. And with “All of our love, from the bottom of our hearts, Dinah Jane, Lauren, Normani and Ally xoxoxo,” they signed off.