As Kylie Minogue toasts her 50th birthday, her bond with gay fans worldwide feels stronger than ever. Next month, she’ll headline New York City’s Pride Island festival. In April, she gave a free show at London’s huge G-A-Y club night to celebrate its 25th birthday. And just weeks earlier, she’d promoted latest album Golden with a gig at anything-goes Berlin queer club Berghain. It’s widely and rightly accepted that Kylie is one of her generation’s great gay icons, but understanding why requires some careful unpacking.

In the US, Kylie’s appeal has grown pretty slowly over the years. Oddly, she’s only ever scored two Billboard Hot 100 top ten hits (1988’s “The Loco-Motion” and 2001’s “Can’t Get You Out of My Head”), and didn’t tour North America until 2009. The roots of her gay icon status really lie in the UK, her adopted home, and Australia, where she was born and raised then shot to fame on daytime soap opera Neighbours. Internationally, her career has enjoyed glittering peaks and survived the odd trough, but she’s had a massive gay fanbase for as long as anyone can remember.

I can still recall, as a closeted 17-year-old, feeling nervous about buying her Fever album from a London record store because I thought the sales associate might realize I was gay. (After circling the store a few times, I finally summoned the courage to take the CD to the cash register; the associate didn’t bat an eyelidshe’d probably been selling Kylie records to queers all day).

Kylie’s early international singles and videos from the late ’80s presented her as a winsome and not very hip girl-next-doorshe frolicked in a bath tub filled with bubbles in the “I Should Be So Lucky” video, and racked up hits with relatively chaste dance-pop tunes like “Got to Be Certain” and “Hand on My Heart.” But as Kylie grew up and reached her early twenties, she wanted more control of her music and image. Now dating hot rock star Michael Hutchence from INXS, Kylie was beginning to feel herself.

So, her look got sexier and her music started to slap harder. It’s a happy coincidence that when she sings, “I was rocked to my very foundations” on 1991 single “Shocked,” it kind of sounds like she’s singing, “I was fucked to my very foundations.” For young gay boys at the time, Kylie’s butterfly moment struck a chord, at least on a subconscious level. Here was someone outgrowing the way she’d been told to present herself and taking ownership of who she was. It’s what so many of us do when we exit the closet and begin to think of ourselves as sexual beings.

Though never as visionary as Madonna, a performer she’s always looked up to, Kylie continued to evolve and push forward through the ’90s. When 1998’s introspective electro album Impossible Princess became her least successful to date, she hit reset and re-emerged as a knowingly campy disco queen for 2000’s Light Years. “Threw away my old clothes, got myself a better wardrobe,” she sings on lead single “Spinning Around. “I got something to say!” Honestly, can you think of a better lyric for a drag queen to lip-sync to? 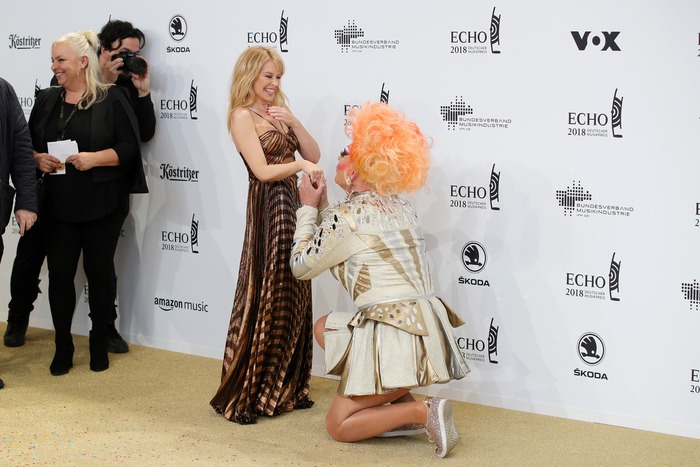 By this point, Kylie had established a close working relationship with stylist William Baker, a gay man, who famously suggested she wear a pair of super-snug gold hot pants in her “Spinning Around” video. Tellingly, Kylie later recalled a time when she and Baker didn’t agree on her gown for an awards show performance. “I had William and a choreographer, two gays, in the dressing room with me. They rugby tackled me out the door shouting: ‘You have to wear that!'” Kylie told MTV. “They were right, it looked fantastic – but what it feels like to be in something, and how someone sees you wearing it, are two very different things.”

Light Years remains Kylie’s gayest album, but in her videos she’s continued to give us gloriously pro-LGBTQ and homoerotic imagery. “Slow” shows her reclining on a beach towel surrounded by a gaggle of absolute snacks. “All the Lovers” features a human pyramid of loving couples lifting her towards the LA skyline; director Joseph Kahn later revealed that she was asked to cut its same-sex kisses but refused. “Timebomb” shows her strutting down Old Compton Street in the heart of London’s gay village, just like so many of her fans will have done.

She’s never been an especially political pop star, probably because she knows her appeal pivots on glittery escapism, not socially conscious sloganeering in the Rhythm Nation or American Life mold. But in 2016 Kylie and then-fiancé Joshua Sasse vowed not to wed until Australia had achieved marriage equality. After Australians voted in favor of extending marriage to same-sex couples last year, she shared celebratory posts on social media and was duly flooded with gays asking her to sing at their wedding. (If Ms. Minogue happened to be available, I’d ask for “Love at First Sight” as my first dance song, FYI.)

But much as we can discuss and dissect Kylie’s “gayest moments,” there’s something about her that’s just innately gay. She’s said she can remember seeing Sydney drag queens performing to her music way back in 1988, when, in the nicest possible way, she didn’t look like much of a gay icon. “My gay audience has been with me from the beginning … they kind of adopted me,” Kylie has said. Perhaps Rufus Wainwright came close to capturing her queer appeal when she called her “the gay shorthand for joy.”

So, happy birthday Kylie Minogue, and here’s to the next however-many-decades of soundtracking our lives.