As a frequent member of Ryan Murphy’s core ensemble, Finn Wittrock is used to being murdered. But in The Assassination of Gianni Versace: American Crime Story, there’s the added weight of playing the real-life victim of who is referred to as a America’s first gay serial killer.

“It was surreal,” Wittrock tells INTO. “It was one of the most, just physically and technically one of the hardest things. I was dead and covered in blood and prosthetics for about 12 hours for three days, and they kept telling me they were going to use a fake body double but they used me a lot more than I thought they would. I feel like I earned my stripes that day.”

In the new FX mini-series, Wittrock plays 28-year-old Jeffrey Traill, a former lieutenant in the U.S. Navy whose time in the military coincided with the realization of his homosexuality as well as the instatement of Don’t Ask, Don’t Tell. Traill, a Gulf War veteran from a blue collar Illinois family, once appeared on 48 Hours to discuss being gay in the navy, though he was shrouded in shadowy anonymity to protect himself from dishonorable discharge. 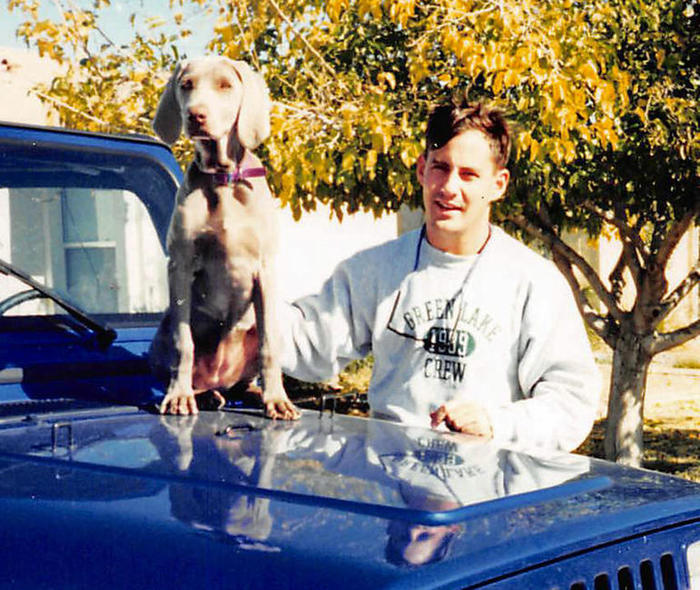 “Gays are here in the military,” Traill told host Richard Schlesinger. “We perform our jobs and we do it well. … You’re gonna weaken our national defense if you remove gays from the military. And you’ll never be able to do it 100 percentit’s just whether or not you continue to hunt us and force us to fear.”

“I watched that a lotevery day, over and over, and tried to get his cadence and his rhythm and his shame and also his pride,” Wittrock said of the 48 Hours segment. “He is a complicated fellow. And such a tragic ending because he seemed to have so much potential and just figuring out who he was and what he wanted to do with his life and he lived in a time when he was just a little too early for his time, kind of a trailblazer in a way, you know?”

Traill was, by all accounts, a good guymaybe too good in that his friendliness and empathy may have cost him his life. Or perhaps it was just bad luck. Traill met Andrew Cunanan after leaving the Navy, but staying near port in San Diego, where Cunanan was a fixture of the nearby gayborhood. In her book Vulgar Favors, journalist Maureen Orth details both Cunanan’s history with wonts of flashiness and propensity for compulsive lying as well as Traill’s loneliness and internalized homophobia as he ventured out of the military and into gay bars. Their fateful meeting turned into a friendship that ended with Traill’s being beaten to death with a claw hammer in a mutual friend’s Minneapolis loft.

The Assassination of Giannini Versace writer Tom Rob Smith adapted his teleplay largely from Orth’s book, as she covered the case for Vanity Fair before Cunanan even reached Versace in Miami in July of 1997. (He would kill himself eight days later.) What Orth’s book offers is not just an in-depth look at Cunanan’s background and psyche, but extensive research into the victims (Traill and Versace as well as architect David Madson, real estate tycoon Lee Miglin, and cemetery worker William Reese), as well as the landscape of American homophobia that factored heavily into how Cunanan’s pre-meditated murder spree was able to unfold.

The FX series attempts to fit as much backstory as it can into a narrative that is by and large about Cunanan (Darren Criss) more than it is Versace (played by Edgar Ramirez), but it’s also more about the anti-gay rhetoric that existed in America at the time than it is about the specificity of Versace’s shooting. 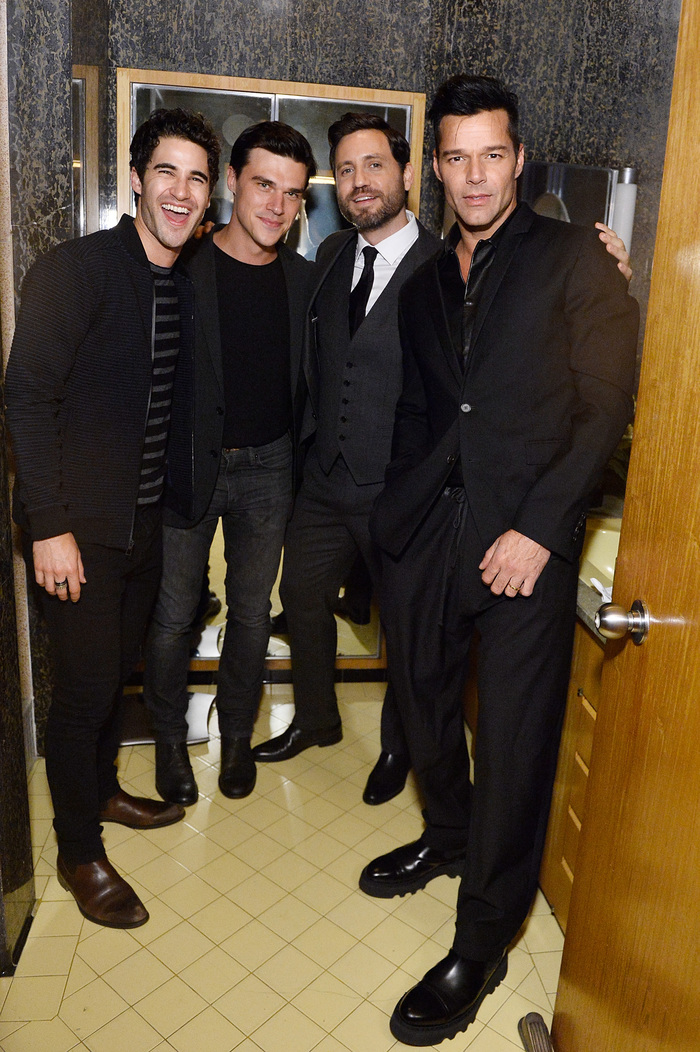 “Certainly for me and I think for Ryan, too, the homophobia that runs through the story isit brings up painful memories,” says out EP Nina Jacobson. “It is a reminder of how much had changed in 20 years. But to read even in Maureen’s book about where these guys are being outed as they are being murdered; [that police] go to the parents and say, ‘Well, there’s things you don’t know about your son’it’s just so wrong and so disturbing.”

Jacobson brings up how the FBI knew Cunanan was not just gay, but a frequenter of gay nightclubs, and yet, they wouldn’t canvas gay bars in their manhunt.

Versace, she says, didn’t have to die. And that’s one case that the show attempts to make as it tells the story of Cunanan and his murder spree in a backward fashion of sorts.

“There are so many chapters and its such a sprawling, interesting narrativeit’s like a tree that grows all these different branches,” Wittrock says of the show. “Episode by episode kind of takes you down this individual arc that leads back to the main thing, so I am amused by the structure of it and the writing.”

“Just learning about who Andrew Cunanan is just an amazing dark rabbit hole to go down,” Wittrock continues. “It’s like learning about Jack the Ripper. It’s like you are horrified, but can’t turn away.”

As Traill, Wittrock may meet an untimely death, but he otherwise poses a powerful authenticity that Cuanan seemed to be envious of. Although he was closeted while in the military, Traill risked his career doing not only the 48 Hours interview, but also protecting another soldier from being gay bashed, spurning rumors about his own sexual identity. When Cunanan attempted to out him to his father by sending a romantic sounding postcard to his family’s home address, Wittrock held his composure but decided to cut Cunanan out of his lifeat least, that’s what he said he’d planned to do after allowing Cunanan to visit him one last time.

Despite the star power that Ramirez, Ricky Martin, and Penelope Cruz inevitably bring to the series (Martin plays Versace’s long-term lover Antonio D’Amico; Cruz is a campy yet convincing Donatella), Darren Criss is truly the star of Assassination. The name recognition that Versace brings has overshadowed the other victims’ deaths since they took place, but now, the cast and crew insist, they use it not just to draw viewers in, but to take away the iconography Cunanan would have wanted for himself as a fame-seeking serial killer. Instead, Jacobson says, the EPs were hoping the theme would be more about “the inability to be authentic and the struggle for authenticity.”

“And the courage of Versace’s heroism,” she adds, “which I didn’t realize really. When you put him in a timeline, the only other designers who were out were dead, and they were out because they died of AIDS. He chose to come out at a time when Ellen wasn’t out yet. It was a very different time.”

And while Versace’s own hard working history and public coming out was admirable (both on screen and in real life), it’s Wittrock’s broody but noble sailor-turned-factory worker that brings the most relatable heart to the series. Watching him spar with Criss as his scene partner are some of Assassination‘s most heartbreaking, too, when you know it’s based on a true horror story.

“We had a good time,” Wittrock said of working with Criss. “There are some projects where you really take the relationship off screen and this one was more us talking as co-conspirators figuring it out together. He is a very generous person on set and a remarkable versatile actor and really jumps in and out of the character very fluidly.”

Wittrock said Murphy approached him about the role right as he was finishing up The Glass Menagerie on Broadway, and the timing was right not just for him to jump at a new series, but at another chance to work with Murphy, whose prolific creativity can be hit or miss, but is at least always fun for the actors.

“I think that I have been lucky to fall into the Ryan Murphy fan group and that has its own niche within it,” Wittrock says. “I am honored to be in anything that he has me do, and its cool to play the spectrums of yourself.”

And for Wittrock, playing yet another queer role in the Murphy universe invites an opportunity for him to connect with a fanbase that has supported him in American Horror Story iterations and his role in The Normal Heart. A fanbase that, in 2018, is hopefully outraged by the homophobia that was implicit in the deaths of four gay men (Reese, victim of being in the wrong place at the wrong time, was straight) as it is excited by the idea of seeing Wittrock, Criss, Ramirez, and Martin play queer roles for nine episodes of Ryan Murphy television. It’s certainly a different landscape than when Versace came out, one of few public figures to acknowledge that not only was he gay, but he was happy, too.

Says Wittrock, “Bring on all the gay fans!”

Images via Getty and FX