In the queer feminist punk underground, there are few labels with as much prestige as Sister Polygon. Formed by the members of the punk band Priests, the label has launched alternative music stars like queer indie artist Snail Mail and Downtown Boys.

Now the label has a new band to champion: Florry, a group led by 17-year-old queer and trans-identified frontwoman Francie Medosch, who’ve been playing bleeding-heart bedroom punk under various names for years. The band just cemented their status as one of the cool kids by putting out their debut full-length Brown Bunny November 23rd.

Medosch first broke onto the Bandcamp scene with past project Francie Cool, before cycling through members and changing the name to Florry, looking to put the focus on the music instead of herself. The mysterious fingerpicking guitarist we see onstage is a shy person offstage who gets really excited about her pets (three cats ― Simba, Robocop, and Bill ― as well as a potbellied pig, Bluto, and husky, Kaya). Her pets, alongside the inclusive punk underground scene Medosch found, have helped her move on from the harsh realities of being openly trans, including school bullies, mental health problems, and a suicide attempt in eighth grade.

Medosch embodies the “quiet genius” archetype often mythologized in rock. She takes a long time to answer questions, often falling back on platitudes. She relies on her instincts when it comes to her music, and is still working out how to explain it to people. Similarly, her songs really take flight during the instrumental breakdowns, where she and her bandmates can flex their chops.

Florry’s eight-song Brown Bunny is a showcase of Medosch’s inventive song structures and dark lyrics. Unlike many of their contemporaries who draw from the twee and Riot Grrrl movements, Florry pairs folk elements like slide guitar and violins with her voice, which brings to mind the squeaks of Clap Your Hands Say Yeah’s Alec Ounsworth or Human People’s Hayley Livingston. Even when you can’t make out that Medosch is singing lines like “Whatever you what you want is what I get /  I’ll choke, I’ll choke” on songs like “Period,” her melancholy is palpable. Throughout the album, Medosch wrestles with her desire to have a simpler life free from abuse and the reality that she shouldn’t have to diminish what makes her different to do so.

We chatted on the phone about the struggle of being a queer high schooler, how punk is her realm to let loose, and her future plans for Florry.

INTO: You said you were working on Psychology notes earlier today. Are you still in high school?

Francie Medosch: Yeah I am a senior in high school.

Nice, so its an AP Psych situation?

How is that going?

It’s good. I feel like its coincided very nicely. This year I’ve been trying to work on mental health a lot and trying to explore myself.

Yeah, it sometimes is. I think for the first three or four years I was pretty uncomfortable most of the time. But this year, senior year, I have felt strangely so comfortable with myself and projecting myself out there, being social and trying to let my ideas be known more. I used to be very shy, like purposefully shy. I would sometimes go days without saying a single word at all back in sophomore year. That was a really shitty year for me.

What was especially hard about sophomore year?

A lot of mental illness reasons. It was super hard to remain functioning every day. Also, I was doing so many shows that year, sophomore year. I was always fucking around playing shows or hanging out with friends. Junior year was the first year I was getting better, and I didn’t play any shows at all.

Going back a bit, earlier you said the first four years you were out was really hard. So did you come out in eighth grade? We’re you coming out both as gay and trans or was it one before the other?

I had always been open about being flexible with whom I’m attracted too. I don’t think anyone who knows me was surprised by that, except for a few people which felt really weird. For me, it’s always surprising when I discover anyone is homophobic. It’s such a weird thing to be mad about. I came out as trans sometime around the end of freshman year and the beginning of sophomore year.

Was your family okay with it?

Yeah, they were. I was hard at first, for the first year or so, just them getting used to all that stuff, but now it’s great. For the most part, I’ve always felt pretty nervous at family gatherings. Especially when I started dressing feminine, I would get more scared. I was able to feel so much more comfortable with being myself around other people.

Do you think that’s at all tied with how your music is going? Florry just got named a “Band to Watch” on Stereogum, which is a pretty buzzy title.

Honestly, I haven’t paired the two together at any point until just now. I’d say it was just a coincidence. It just happened that this album took a really long time to produce and make.

Did you always know it would be out on Sister Polygon or were there stretches of time where you thought you would just release it yourself?

We started recording in 2016. Halfway through the recording process, we played a show with Priests up at Bard [College] in September of 2017. I know they liked our set, and I loved Sister Polygon as well. I reached out to [Priests frontwoman] Katie [Greer] asking if she could listen to what we had so far of the record, and I also asked if Sister Polygon was accepting submissions. Katie said at the moment they weren’t, but she wanted to hear the album anyway, so I sent it over. The next thing she said from there was that they’d probably release it and asked what I’d want from the label and how it would all go down. We only officially figured that all out in June. I half assumed they’d release it, but there’s always the possibility it wouldn’t work out.

You’ve already got plans for another album, but you’re also a senior in high school. Do you plan on going to college?

Yeah, I plan on going to college, probably somewhere in New York or if not, then around Philly. Was that a good answer?

Sure! Do you plan on having your bandmates come with you to college or are you just going to mail songs back and forth and then tour? How do you anticipate being in college and being in a band going?

Well my drummer Theo [Woodward]already lives in New York. Our bassist Peter [Gil] is fine with traveling when we need to. We don’t practice that often. In the past with Francie Cool, it was me in Philly and Abby [Jones) and Theo all in New York so we’re used to having to travel to practice and stuff. 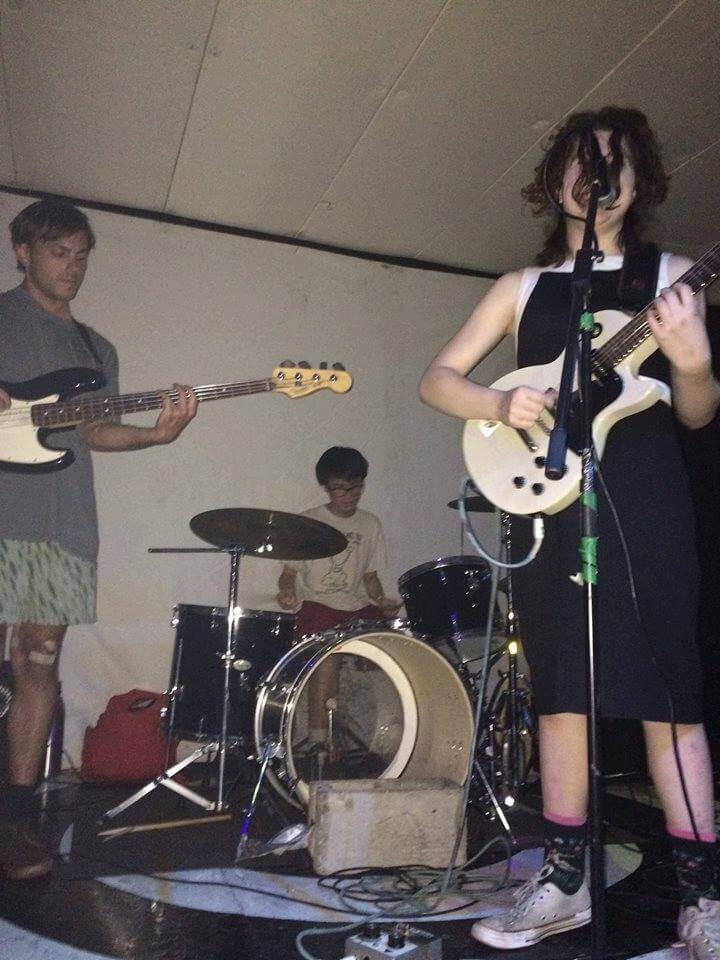 Let’s talk about the songs on Brown Bunny. What does the acronym KFG stand for?

There’s a lot of stuff in the song about empowerment.  You say “Maybe I should just go after it/maybe I will change my life.” It sounds like with those lyrics and the title “Kung Fu Girl” you’re building yourself up as this hero protagonist, like a Buffy character.

Yeah, I did that a lot on the older album of mine, assuming an identity that works better and is easier and then feeling insecure about lying to yourself. “Kung Fu Girl” is another one of those songs.

What kind of Identity would you assume?

Oh, just like being a stronger person ― pretending I don’t have all these problems.

In “Someone Please Ask Me Out,” you sing “He’s got the weight of the world on his big broad shoulders.”

Oh yeah, that’s my cat! I love him. I mention him a lot in older Francie Cool stuff as well.

The song seems like it’s very much about wanting to be “normal” so you could be asked out. Why did you mention your cat in the song but leave so it sounds like you could be describing a boy?

There’s a lot of hidden messages in my music. Looking at it now it makes me feel super straight or something. I rarely talk about women in music.

Well, actually, in the new album there’s some gay stuff.

So why bring up your cat?

Oh, I just love him and just playing little tributes to him.

At the end of “Someone Please Ask Me Out” you sing “I’m extra normal to you.” Does that mean you’re the most normal, or something more than normal?

I think that’s more me saying that is me wishing it was true.

That you were normal?

No, not that. I just use the word in my music sometimes because I like the simplicity of it. What I mean when I say that stuff is to live without being hated.

You play at a lot of DIY or illegal places. Do you ever get nervous that someone at a gig will be really homophobic or transphobic?

Yeah. I feel pretty loose at gigs or just outside school, in general. But shows are where I can really let loose.

I think so. I’ve never really had stage fright when it comes to performing music, which is interesting considering all the other anxieties I do have about stuff. For some reason, it always felt pretty comfortable and natural for me. I don’t think I’ve ever played a show where some douche was rude to people. Or maybe I just don’t notice it.

Do you have any goals with your music going forward?

I just hope I can inspire other younger people to get active in their field of interest. You don’t have to be done with high school or even college to do the shit you wanna do. Especially today you have so many opportunities to shape your whole life. I wish I could see other people doing that. You shouldn’t be scared of trying to live in a man’s world. I hope my music can help people if they’ve been through similar situations that I’ve been through. Some people have told me that my music has helped them which is a really great feeling, knowing that you can help someone with your art and also just with yourself.