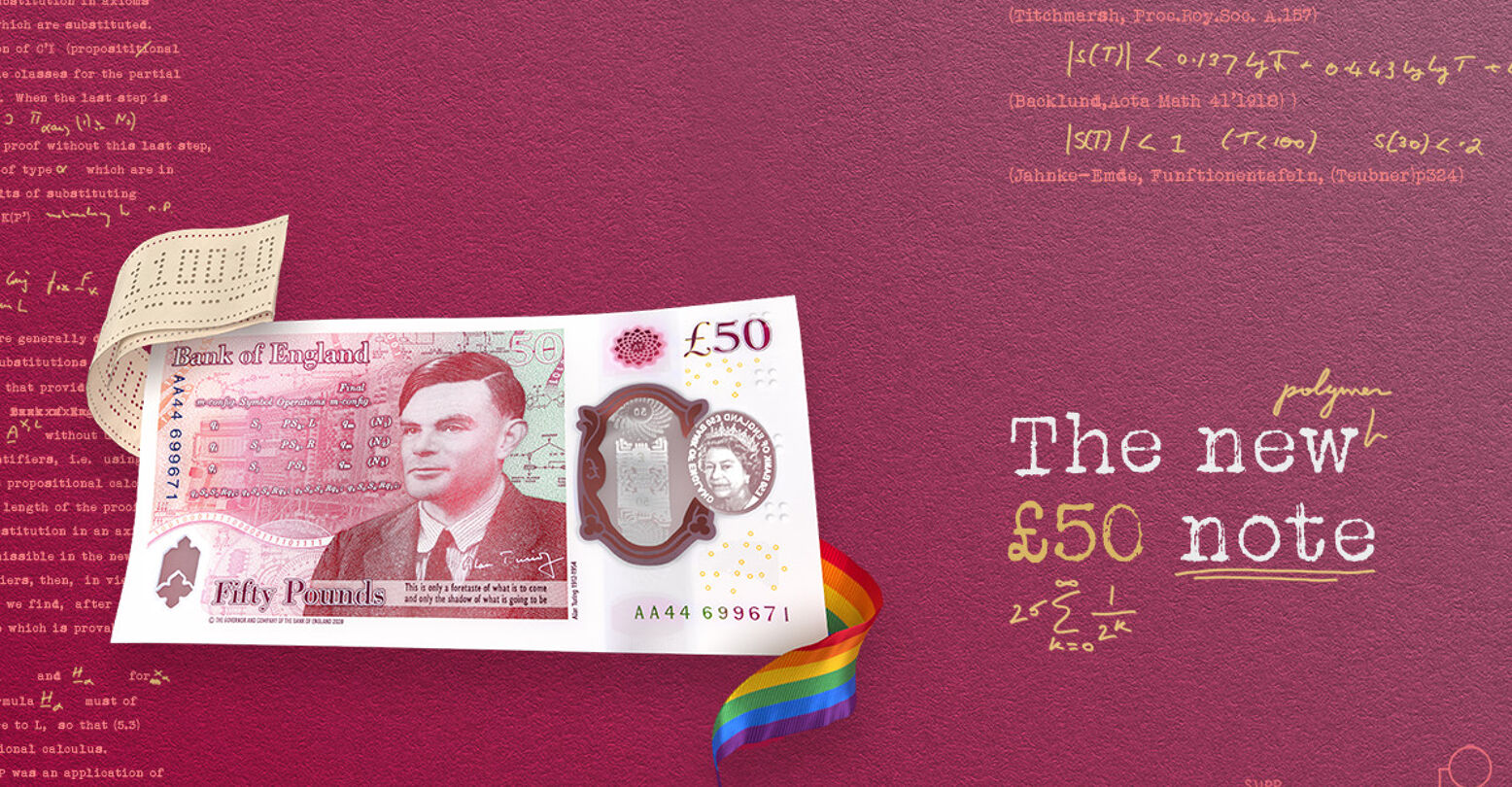 Today, the Bank of England honors Alan Turing with the release of their redesigned £50 note, which features a portrait of the legendary, gay computing pioneer.

The date of circulation purposely coincides with what would have been Turing’s 109th birthday. Although, considering Turing committed suicide at age 41 and the government chemically castrated him for being gay: it all seems a bit late.

As a computing pioneer, Alan Turing created the theoretical basis for the modern computer. He also just happened to be the man that devised the essential code-breaking machines utilized during WWII; but because he was gay, his personal life suffered at the hands of the very same government he dedicated his life to helping.

In an attempt to right the wrongs the British Government subjected Turing to in his lifetime, the note is covered with images and words reminiscent of the WWII codebreaker. A portrait photograph of Turing taken in 1951 by the studio Elliot & Fry replaces the previous photos of James Watt and Matthew Boulton.

Find out more about the new note and its features: https://t.co/nbOlU9kgCU #TheNew50 pic.twitter.com/Ipw8nQGBwJ

Sitting below his portrait is a profound quote, as spoken by Turing about his innovative yet often unaccredited life-changing work: “This is only a foretaste of what is to come, and only the shadow of what is going to be.” Being the inventor of the Automatic Computing Engine (ACE) Pilot Machine: one of the first electronic stored-program digital computers, Turing couldn’t have been more right. As such, artwork of the ACE Pilot Machine and its technical plans are featured on the note as well.

Turing’s nephew, Sir Dermot Turing, proudly remembers the legacy of his uncle’s work. “He was famous as a computer pioneer, as the founder of computer science,” he told PinkNews, and is the founder of a whole branch of mathematics called computability.”

Despite his efforts to modernize the twentieth century and help end WWII, Turing was legally convicted of “indecency” and heinously castrated with chemicals for being a gay man in 1952. Two years later he killed himself. Decades later and the government still has not banned conversation therapy.

To not legally ban conversion therapy negates even the Queen’s formal apology made in 2009 and an official “pardon” in 2013. If the government was prepared to pardon queer men convicted of sex crimes and name the law after Turing, then the question becomes what is preventing them from providing full legal support to the LGBTQ+ community.

Jeremy Fleming, director of GCHQ—a government intelligence and security agency—was proud to announce the note starring Turing but reminded the public there was still much more work to be done, “His legacy is a reminder of the value of embracing all aspects of diversity but also the work we still need to do to become truly inclusive.”

Even though the £50 note highlights some contradictory stances within the British Government, one can hope that in the circulation of Turing’s portrait there will be a rebirth in appreciation for not just his work, but for his life as a gay man as well. It seems possible the note will bring attention to Turing’s life considering it is the first release of a plastic variety; the likes of which will become the primary currency for £50 notes as paper will no longer be accepted in October of next year.