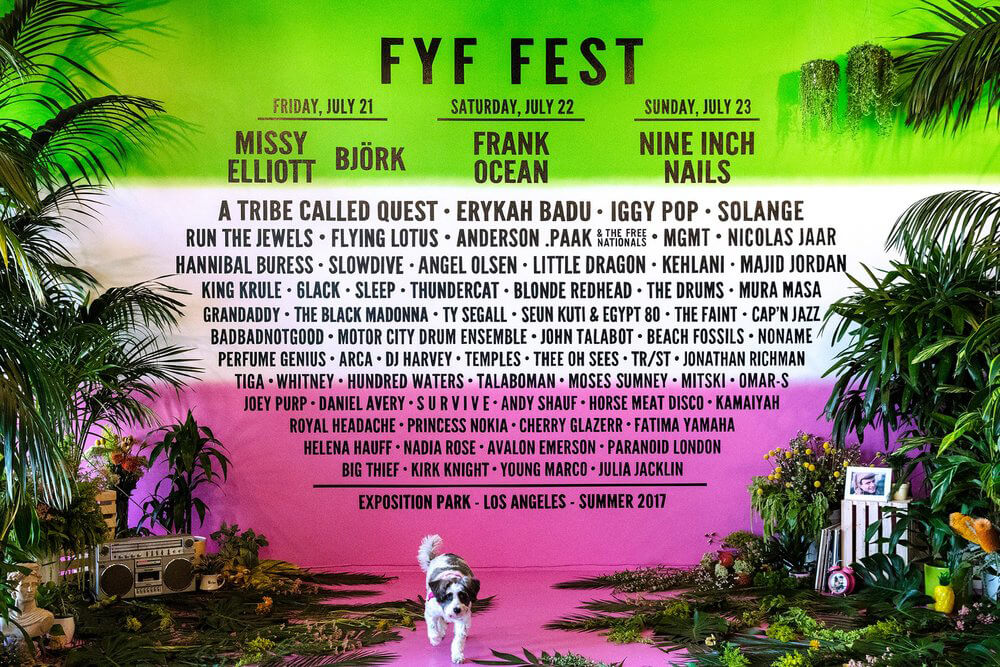 The INTO offices will grind to a halt this weekend as 99.9% of our staff (and the rest of queer LA) heads to FYF Fest for a stacked lineup featuring musical icons like Bjork, Missy Elliott, and Solange.

With six stages in play, it’s impossible to see everyone, so you’ll need to make some hard choices—and we want you to feel good about them. To help you work it out, we asked our savvy INTO team who they’re most excited to see.

If you haven’t been listening to SWEETSEXYSAVAGE, I’m honestly not quite sure what you’ve been doing this hot LA summer. The gem of this album is “Get Like,” and Kehlani throws down her ‘90s convertible drop top banger to make you feel like traffic is an excuse to test out those festival dance moves before anyone gets a peek. Cash me at this show gettin’ DOWN like it’s 1993 in my Volvo, ripping donuts in the parking lot, and Beyoncé-leaning out the car window feelin’ myself.

Mac is what I like to call wrong-hot. You know you’re not supposed to be down bc he’s straight and probably doesn’t shower or wear deodorant or know who Alyssa Edwards is, but it’s still ON. This song is so sexy and timeless and effortless. It sounds like he just rolled out of bed and made it. And then went back to bed. Looking forward to seeing him work his weirdo charm on the FYF stage.

Growing up, my mom and I would drive around town listening to Missy Elliott songs, yelling lyrics like “I don’t want no one minute maaaaan” as confused drivers rolled past us. Her music wasn’t only something we could ‘Work It’ to in the car, but to us it was a moment to lose control. And to be frank, her music is probably the reason why I’m gay. So, if you want to get FYF started right then Missy is a must on the first day of the festival.

Maybe I’m old or ignorant, but I am a person that still does not really get why DJs are so celebrated these days. But I do know that they can be geniuses. At a Prototype LA event last winter, The Black Madonna opened my eyes. She played a mind-blowing set that bounced around between house, disco, techno, and a multitude of other genres I just looked up, winding us all up to an interlude of the most surprising smooth jazz that felt like a huge gulp of water before she thrust us all back down into the throbbing pulse. I’ve never experienced anything quite like it. The Black Madonna is not to be missed.

Erykah Badu – “The Other Side of the Game” (Corbett)

Oh she does? I looked down at the ankh ring on my hand and immediately felt connected by our mutual love for a timeless egyptian symbol. Granted, I was coming down from a crazy shroom trip in Amsterdam (in which I circled the same block on my rented bike for two hours), but in one swoosh on an evening in 1999, Erykah commanded my full attention. Her organic, I-love-you-but-imma-do-shit-my-way vibes have evolved for over two decades, but her classic, sultry voice always endures. And while her albums are experiences unto themselves, her live shows give you the full rub of this eccentric, unpredictable force. Do you have any clue how funny she is on the mic? Do you know how eager she is to stage dive? Will you know the words when she stops her set to recite “Rapper’s Delight”? And will you be able to handle it when she scraps all of the above to fiddle on her drum machine? That’s my queen goin’ on and on.

Frank hit the big time in 2012 with Channel Orange, but he’s still something of an enigma. Very private and unpredictable, the mystery that surrounds him has only made him more sought after. For me, “Nikes” is an example of when music videos can cross over to become modern art. Every shot looked like a fashion photograph. For a very visual person like myself, it’s pure eye candy.

Go see Japanese-American singer-songwriter Mitski for the sheer spectacle of her boss-bitch guitar playing, but stay for her heart-ravaging lyrics of love lost. And if you’ve ever been in love with a foreigner, journey with her on the single, “Your Best American Girl,” as she comes to terms with her Japanese upbringing and the reality that she’ll never quite fit into the life of her American love. I’ll be the one in black, quietly crying into my $12 hazelnut microbrew session IPA, mourning the loss of my French lover who introduced me to this track.

I’d describe my spirit animal as Solange—visual, thoughtful, and super groovy. I first fell in love with her through “Sandcastle Disco” and became an instant fan when I found out she designed her own album covers. I’m really looking forward to getting inspired and seeing the influences of all the women she wrote A Seat At The Table for. I’m expecting trumpets, something atmospheric, monochromatic colors, and varying moments of coordination. Nothing but a night of belting and dancing, full of sisterhood joy.

For every Arca track that’s haunting and beautiful there’s another that sounds like nails on a chalkboard, which is to say that I’m a fan but not a stan. The music isn’t for everyone, but there’s definitely something impressive about the fact that he’s not afraid to alienate people with harsh discordances, fucked up timings, and aggressive displays of queer sexuality. The latter is why you shouldn’t miss him at FYF—knee-high stripper boots, bondage gear, and lots of skanky gyrating add some welcome heat to the icy synthscapes.

Whether she’s draped a dead swan across her body or wrapped a slinky around her head, Bjork always a delivers an emotional and powerful performance. Her music is not easy listening and her lyrics can be challenging, but love her or hate her, the voice is unmistakeable and she is truly one of a kind. Her one and only movie; Dancer in the Dark is a masterpiece and is my all-time favorite. “I’ve Seen It All” was the song she performed in said swan carcass, and it remains one of my favorite songs and performances of hers.