“Every time we talk you use that word, describing yourself as if I never heard,” is the opening line to GRLwood’s latest song, “Bisexual.”

The Louisville punk-rock duo consists of two self-identifying “angry lesbian genderfuck feminists,” Rej Forester and Karen Ledford. The two have an energy you can’t ignore; Forester’s raw vocals accompanied by Ledford’s catchy rhythm make you nod along and want to come back for more. 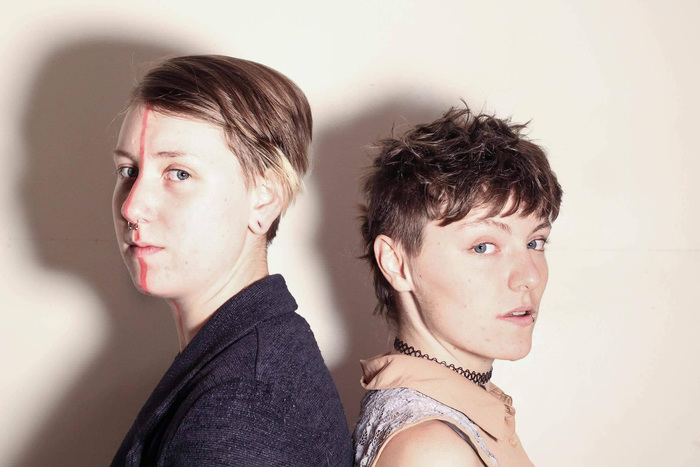 And I’ll admit–as a bi woman, I was tapping right along with them–that is, until I listened more closely to the lyrics.

Forester leads into the chorus gaining momentum with anger in her voice, ”You say you’re bisexual, oh, oh,” shortly followed by “Do you have a boyfriend? I want to be your boyfriend.”

The song wraps up by revisiting the chorus one more time, as Forester makes one last plea for the bisexual object of her affection to leave her boyfriend, and shack up with her instead.

In an interview with Never Nervous, when asked what their band message was, Ledford responded: “We live in a society where people are put down constantly for having the “’wrong sexuality,’ the ‘wrong color skin,’ and the ‘wrong gender identity.’ GRLwood speaks out against this and stands for equality.”

Which in theory is amazing–but in practice, the duo seems to perhaps unintentionally be pointing out a larger issue within the LGBTQ community: The constant misunderstanding and erasure of bisexuality.

The song paints a villainous picture of a bisexual woman, who flirts and woos the singer with little regard of anyone’s feelings but her own. This stereotypical depiction plays into the damaging portrayals of bi women already in mainstream music (Katy Perry’s “I Kissed A Girl” and Demi Lovato’s “Cool For The Summer”). And while GRLwood, Perry, and Lovato all have different musical approaches, they share a corresponding thread: Rather than showing bisexual folks as confident in the way they identify, they imply that at the end of the day, you must be one or the other–so don’t bother telling your mother.

And maybe the inspiration of this song is true–maybe someone got burned by a bi woman who ultimately chose a man over them. But in that case–name the song after the girl who burned you, not an entire community of people. Music is an incredible outlet to explore life experiences and present them in universal ways, and it’s an even more powerful outlet for representation–or in this case, misrepresentation.

As queer folks, we’re experiencing a really exciting wave of music. We’re seeing more and more openly queer women creating anthems that queer folks can point to and feel a little bit more seen by. But I can’t help but feel a little disheartened by this. The song itself feels unsurprising for bi women: It’s a tale as old as time, song as old as rhyme–Lesbian And The Beast.

So while lots of things excite me about GRLwood–including their ability to be unapologetically themselves–wrapping an entire sexuality into one song feels a little bit reckless.