This has been a scary year for marginalized people living in the United States, but Mexican auteur and queer ally Guillermo del Toro has found a place where he can go to restore his faith in humanity. Escapists go to this same spot –the movie theater – to lose themselves in the fantasy filmmaker’s thoughtfully executed adult fairy tales, where two hours spent with a current-events-mirroring fable such as del Toro’s latest slice of sensitive art, The Shape of Water, can spark empathy when basic human empathy seems to have been lost.

“This is what has been beautiful so far,” a humbled del Toro tells INTO after attending numerous screenings of his breathtaking Oscar contender and seeing that “half of the audience is under 30 the other half goes from 40 to 70 to 80,” and there are gay and straight people, and black and white and Muslim people.

The film is centered on a mute cleaning lady, Elisa (Sally Hawkins), and her romantic connection with a misunderstood man creature (del Toro’s go-to monster actor Doug Jones, whose name alone we love), an allegory for queerness born out of the director’s otherworldly whimsy and own minority experience. The Shape of Water, then, is a loving ode to the “other,” further embodied by Elisa’s dear friend and neighbor, Giles (Richard Jenkins), a closeted gay man, and Octavia Spencer as Zelda, Elisa’s co-worker.

Yes, we certainly owe him a great deal of gratitude for immortalizing shirtless shots of Charlie Hunnam for Pacific Rim (by the way, he tells me, chuckling, he was “happy to have obliged”). But more importantly, del Toro’s breadth of outsider-themed films about an 11-year-old using her imagination to escape the horrors of fascism (Pan’s Labyrinth) and a bullied orphan (The Devil’s Backbone) –and now outsiders of various kinds in his sublime, genre-defying The Shape of Water – continue to be guiding lights in these dark and uncertain times. 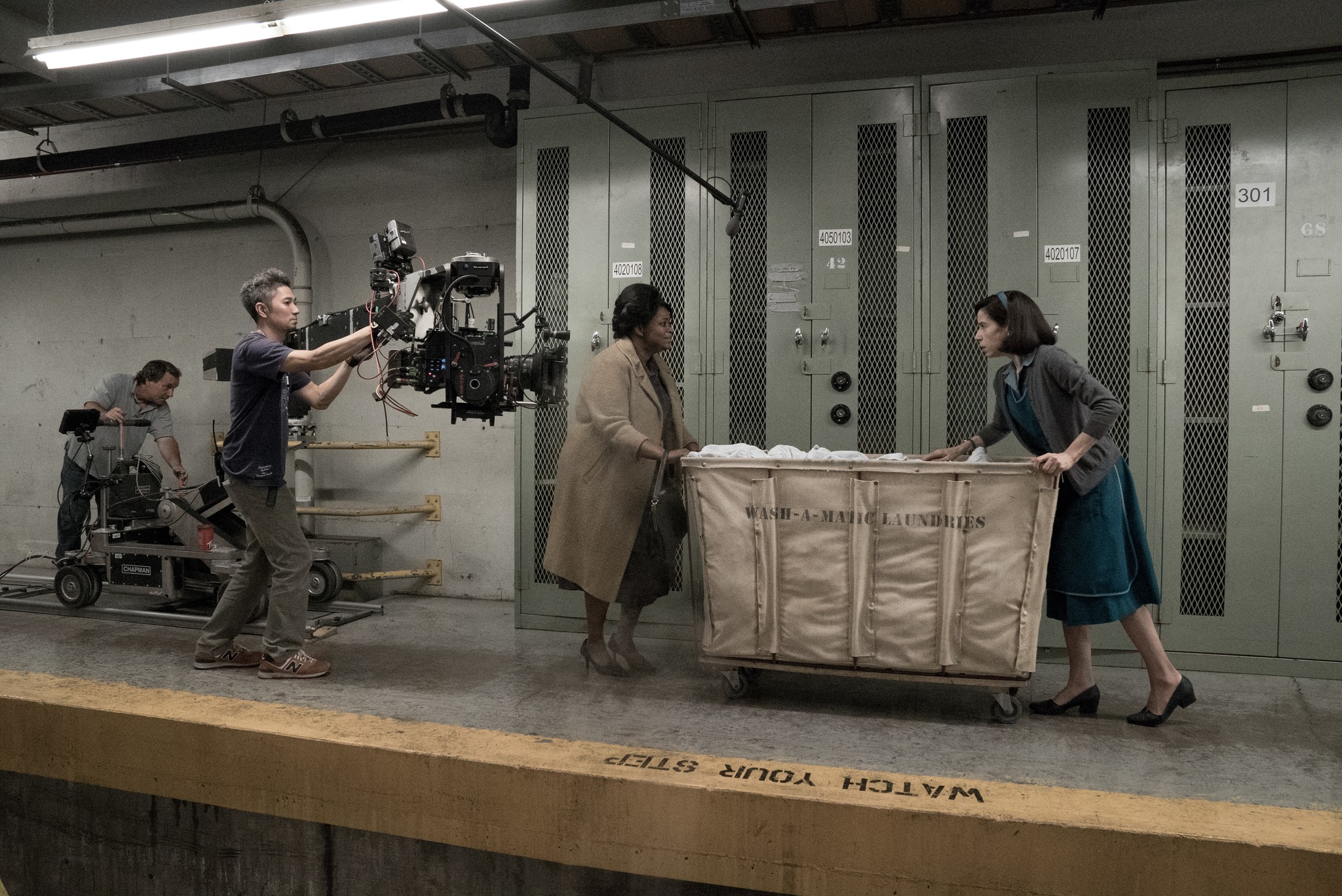 This film is being called one of the queerest films of the year. Do you take that as a compliment?

One of the lessons here is to lead by compassion.

Yes. I said, “I want this movie to be like a song, and I want the movie like the song you hear when you’re driving your car on the highway and it’s a love song and you pump the volume and sing along.” I hope and pray that the audience comes out of the movie humming the movie.

This takes place during the Cold War, but it could be taking place right now. Did you intend to make even the most hateful Trump supporter question their narrow-minded beliefs?

Look, I am an immigrant, and the way I’ve seen the world and the urgency to tell this story has been a life’s work – a long time, not just now. When you get the tumor is not when you have cancer, and we have this thing festering barely below the surface for so long, and I wanted to talk about it without the blinding coarseness of the headlines today.

I wanted to set it in 1962 because it’s a time in which the American imagination crystallizes Camelot and the fairy tale time, but if you go and take a good look, there is a whole negative space that is, in reality, a very divisive time in which, if you were not the right gender, the right political persuasion, the right race, you were completely on the other side of the fence.

I recently spoke to Richard Jenkins about the film and he said if the movie could be titled anything else it would be called Love Is Love.

If I was completely in control of the campaign, actually, the slogan for the movie would be “Love for love.” It’s almost exactly what Richard said, and we didn’t discuss it before, but that’s the idea.

I was with (director) Baz Luhrmann recently in New York having a discussion about the film and during a moment of synchronicity, he said to me, “I was discussing the film and I said it’s ‘love for love,'” and I thought that was so beautiful. But the movie is also about invisibility, silence, loneliness; and one day, if you dissect it on second viewing, for me, it’s also about time. The characters are obsessed with the future or the past and are blind to the present.

Can you talk about your decision to make one of the leads, Giles, a gay man and why that was important to the film’s theme?

The important thing for me was that I needed somebody that could be part of this gang of people who were not visible at the time. I needed to create a different invisibility for each of them. One of them is a Russian spy that cannot even say his real name. The other one is an African-American cleaning woman. The other one is a woman that has no voice.

And Richard, as Giles, fit beautifully because he could articulate the beauty of love appearing in any form, because the idea of the movie is that love is like water; it has no shape but the shape it presents itself to us. We have no choice but to take it. And love breaks through every barrier like water, not because it’s brutal or overbearing, but because it’s gentle and fluid and malleable.

This all came to me one day when I was reading The Tao Te Ching and a portion of it says something like, it is the nature of life to be flexible and the nature of death to be rigid. That which bends and flows stays, that which refuses to bend will break and die.

And I thought, “Well, not only is it relevant to call it The Shape of Water because the embodiment of the river is that river god – that creature – but also because water is like love.” I think there are a crucial couple of moments with Richard’s character that could not exist without him.

Right, because his personal experiences with rejection as a gay man allow him to bend to Elisa’s reasoning regarding the river god, even if he doesn’t quite understand it.

That is something that could only come from that point of view, of Giles being who he is. Not only as a gay man, closeted, but also as an artist that has seen his style come in and out of vogue, that has been rejected in every arena in his life in ’62. The essence of friendship and love is: Can you go with it? Can you take it as it is?

Based on the fact that Giles is such a wonderfully drawn gay character – realistic, empathetic, endearing – leads me to believe that you have many close relationships with people in the LGBTQ community.

In my formative years, one of my mentors was a writer-director called Jaime Humberto Hermosillo, who did a movie called Dona Herlinda and Her Son.

Yeah, it was the first gay comedy in the history of Mexican cinema, released in 1985.

Yes, yes. He assembled around him a band of filmmakers of completely buried genres and ideas and origins. I was the weird guy! (Laughs) I was somebody who wanted to do melodrama, somebody who wanted to do comedy. But all of us came together to support the creation of our film festival in Mexico, in Guadalajara, that has been going for more than 30 years now, and we came together to create a film school and to make the movie. 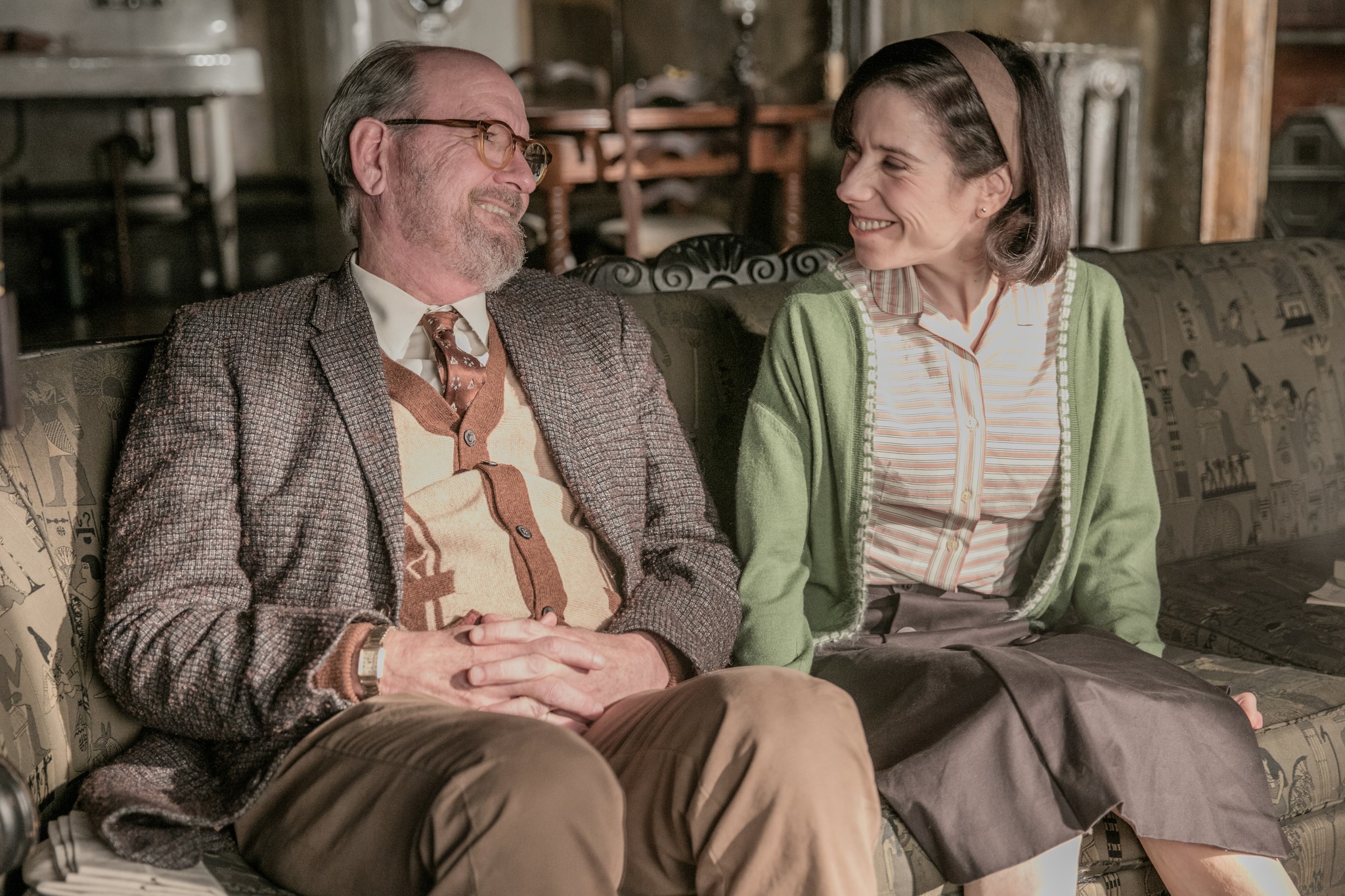 I understand your model for Giles was actor-director James Whale. What about Whale spoke to you?

He was imported by Universal and he gave birth to the monster franchises for them, and then he was a guy that refused to hide at a time when everybody was hiding. He was ostracized very quickly, and I thought, “That’s the backstory for Giles,” which we kind of hint at when he meets with his boss at the publishing agency; we kind of imply that they have a close relationship.

The actor that played his boss, the instruction was to explicitly keep really close, and the scene went a little longer with him sort of caressing the lapel of Giles. I thought, “This is better with less information than with too much information because the actors are living it.”

We never make it explicit because I think one of the goals I had with the screenplay was to not have the characters that have an issue resolve the issue or represent the issue. For example, Octavia could represent the issue of race, but the climactic scene about race comes through Giles. He’s a guy who doesn’t want to see reality, and then he stands up to a racist in the pie shop.

By the same token, the issues of identity and masculinity are represented by (villainous anti-creature government agent Michael) Shannon’s character and are articulated by him because I think it’s much more interesting and kaleidoscopic to resolve these things by intersecting the storylines and the arcs.

Social isolation is a recurrent theme in your films. Why do you think that is a motif you frequently revisit?

This movie is about loneliness, but most of my movies are. Most of my movies are about loss and loneliness and melancholy because that is rooted in my childhood – I think people talk about disfigurement in physical terms, but many of us are born with a soul that was cracked or disfigured at an early age. You feel instantly ostracized when you are not conforming to a mold that people expect you to behave as.

The funny thing about Shape of Water is that it is the first time that I approach life in a life-affirming way. Sexuality, friendship – it is the most life-affirming movie because I think I am younger now at 53 than when I was 20. I feel younger at this age because you are much more able to understand a little bit of the traps and trappings of the world.

This is a very difficult time, and the funny thing, if I may say, is that the central character is the one character that is not lonely. A life that has Giles, a life that has Zelda. She has them. The beauty is, when love comes to you, it’s overpowering. It is beyond any reason. And that’s when they all come together, because it’s about finding the other, whoever the other is.

The thing is, people are people. I’ll tell you this: You take the two most opposite people that you can think of on Earth and put them on a deserted island for five years and they would find each other. I agree with Roger Ebert who once said a film can be, at its best, a giant “empathy machine.”

Guillermo del Toro’s The Shape of Water is playing now in select theaters and opens wide on Dec. 22.