On the cover of Hayley Kiyoko’s debut album, the singer sits perched on a leopard print stool, her head cocked to the left, as she takes in and lusts over the site of a naked woman. It’s an arresting and tongue-in-cheek picture, sure, but it also feels subversive.

It’s something that at just 26 years old, Kiyoko has become synonymous with. For years her music videos have explored the lesbian experience, and they’ve done so unapologetically. The video for her song “Girls Like Girls” went viral, notching up over 71 million views. Not bad for a girl who, at the time, didn’t have a record deal. Since then, each video has explored queerness in some respect, Kiyoko often casting herself in the role of the seductor. It’s a thrilling and welcome unashamed celebration of same-sex female desire that, in the mainstream at least, has been long overdue.

It’s probably this reputation, then, that within the last year landed Hayley Kiyoko with a new nickname: the Lesbian Jesus. “I don’t really know what it truly means,” she says to INTO before laughing. “But I am very appreciative. It’s an insanely incredible title and it means a lot.”

This ascension to god-like-gay-status, however, has been a lengthy one. Over the years her music career has had a few missed starts, most notably her tenure in the short-lived girl band The Stunners. Instead, acting was a focus, and from the age of five she’s appeared in numerous commercials before upgrading to Disney Channel and Nickelodeon TV shows and original movies.

Thankfully, Kiyoko continued to peruse music, and released her debut solo EP in 2013. Yet something wasn’t quite connecting. Writing an essay for Paper magazine in 2016, she explained how, two years prior, she realized something had to change. So she wrote a song about being attracted to girls and from then, her music began to exude a new kind of authenticity, devoid of ambiguous pronouns and explicitly candid.

This is something that has only been amplified with her debut album Expectations. Sitting succinctly at 13 tracks, the record unfolds to tell a highly relatable story of sexual conquests, relationships, heartache, and the bruises of mental health. The songwriting is accomplished, filled with radio-ready hooks that worm around in your head, while the lyrics veer from confessional to downright cocky. Songs like “What I Need” featuring Kehlani and “He’ll Never Love You” are begging for the single treatment, while softer songs like “Mercy/Gatekeeper,” “Let It Be,” and “Molecules” simmer with emotion so that you’re left with pangs in your chest.

Ahead of the album’s release, INTO gave Hayley a call to talk about the record, first crushes, and learning to be open with your life. 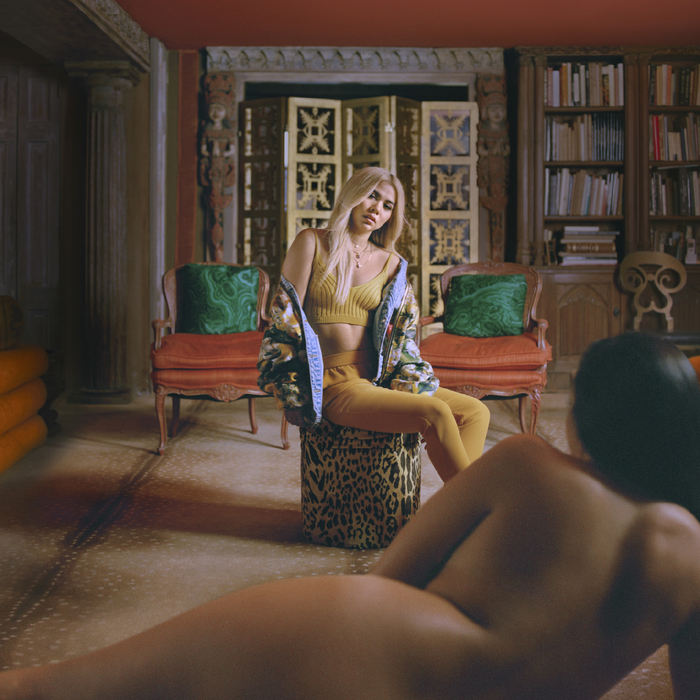 I read that your first crush was on a teacher. Can you tell me about that?

Mine was Leonardo DiCaprio. I can remember being seven and thinking how pretty he was.

Yeah, all the thoughts were very innocent, but it was like, “Wow, your hair is so shiny!” I really liked all of her attributes.

What was it like questioning and discovering your sexuality while also being in the public eye?

I wasn’t really ever questioning my sexuality, it’s just that I’m a very private person. Then there’s also fitting in with society and the pressures of what their preconceived notions of what they already think about you even though they don’t know who you really are. So there was the the stereotypes and the weight of the category that you’ve been placed in, even though you may be completely different from who are you. It’s that pressure that really affects you, or at least it affected me, to be who I was sooner.

You’ve been making music for a while now. Was there a moment where you realized that you were making an album?

To be honest, it’s been baby steps of getting to the opportunity of being able to work on an album. There’s also the process of building up the foundation of a fanbase so that there are people who will want to listen to an album. You don’t wanna write an album if there’s no foundation and if you don’t know what your sound is. So for 26 years I’ve been working on my sound and finding what it is I want to sing about and who I was. So there wasn’t a conscious decision that I’d just make an album, you know? It was like, no, I’m finally at the place where I’ve found my sound and I know my voice and what I want to say.

When I first heard “Feelings” I felt like I had been slapped around the face because I related to it so much.

[Laughs] I’m sorry I slapped you!

Can you tell me where that song came from?

It stemmed from someone making me feel ashamed for my feelings. I just didn’t understand why we live in a society where, in the dating world, you can’t feel things. And as soon as you start feeling it’s considered a bad thing. We’re humans. If you hurt me, I am going to feel; it’s not something that you can just stop. I was frustrated by that. Those lyrics are, like, verbatim: I do over communicate, I feel too much. This is who I am, so don’t make me feel ashamed of that.

I really connected to the lyrics “I’m sorry that I care.”

It’s kind of sarcastic when I say it. It’s like, why should I feel sorry for caring? The end.

The album is confident and playfully cocky, but it also explores moments of anxiety, insecurity, and doubt. Why was it important to show that side, too?

I wanted to show all faucets of who I am. Also, internally, we all have that cocky and confident feeling once in a while. That feeling fades, though, and all your insecurities start seeping in and all those issues rise. I wanted to cover those highs and lows. It’s what makes me human. For me as an artist, I’m really just here to validate those feelings. I’m not here to be like, “Everything is great!” Life, sometimes, is imperfect. I have songs about loss because sometimes we lose people and it’s awful. It’s about ruminating on those feelings.

How do you think you’ve managed to get to that point to put yourself out there like that?

It’s been a very interesting road for me. I’ve matured a lot and the one thing I’ve learned is to not waste time with your feelings and thoughts. I wasted a lot of time growing up and not acting upon what I wanted because I was afraid. I don’t want to do that. I’m a very direct personmy personality is very directso it’s important for me to relay that with my music. If I wasn’t being direct with my music then I wouldn’t be being true to myself as a person and as an artist. It would be duplicitous. I am very intense and black and white. If my music wasn’t like that, if it was in the grey, then it wouldn’t be me. 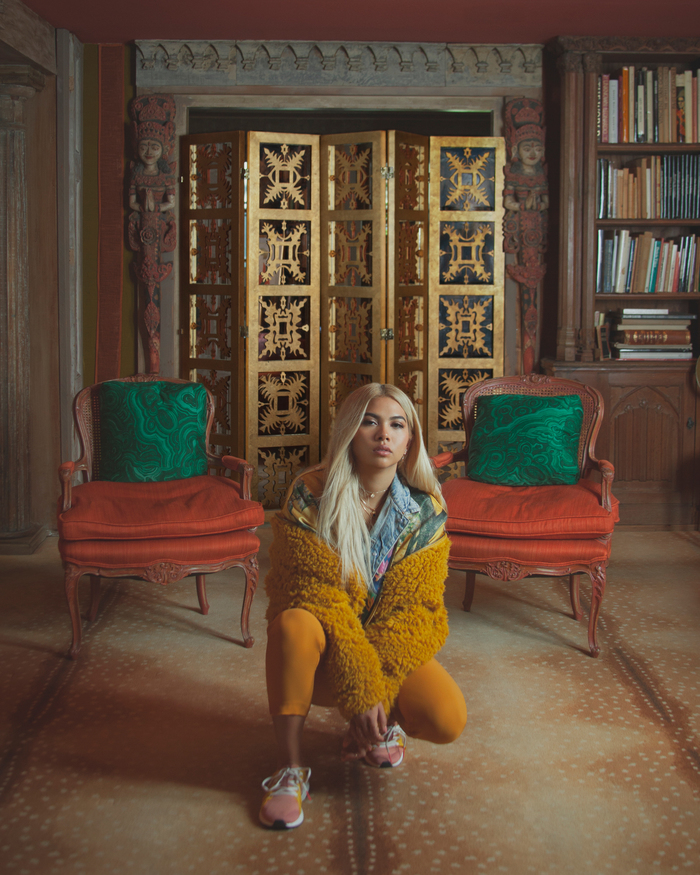 Can you tell me about the song “Mercy” because it’s quite dark?

[Laughs manically] That’s so funny. [Does impression] “That song is…err quite dark.” [laughs] What do you want to know about it?

Well, lyrically that song feels like a real moment of pure emotion.

Normally when I write music the lyrics always come after. That’s the only song in my life and on the album that, lyrically, is verbatim from this poem that I wrote in New York in my journal. I was up until 4am and I was very depressed. Two years ago I suffered a really bad concussion. So I’ve been dealing with post-concussion syndrome ever since, and in the aftermath there was a lot of anxiety and depression. I was also dealing with a lot of chronic pain. Basically, I was in the moment of all of that.

I knew I didn’t want to write a depressing album. So with “Mercy” I was like, “Let’s just dedicate five minutes to that entire journey and try to capture depression in five minutes.” It’s about that journey of being blurry and feeling hopeless but trying to find the light and still moving forward, even though you don’t know where the heck you are. I wanted to capture that because I had been feeling like that for a very long time. And I’m still going through different parts of the aftermath of it. I was in a very dark place at the time.

It’s quite a profound message and actually very universal.

I feel like mental health is huge! And most of the time you can’t control. From my situation, I couldn’t control it because I was dealing with an injury. I felt helpless. It’s something that a lot of people deal with every day. It’s awful and I wanted to have a song that created comfort out of that darkness but also had a sense of hopefulness.