Hayley Kiyoko’s self-directed music videos get millions of views on YouTube (her 2015 video for “Girls Like Girls” has 94 million as of press time), and now the actor-director-turned-pop star has two VMA nominations (Best New Artist and Push Artist of the Year). Still, when Kiyoko stepped onto the stage with Taylor Swift to perform together at the Gillette Stadium in Foxborough, MA two weeks ago, she felt a new level of fame.

“[Taylor] was like ‘Is this your first stadium performance?” Kiyoko relays. It was. “It was as amazing as it could seem in the sense of, I had met her that day and did the sound check. … It was incredible and I’m very thankful for her. I’ll never forget that day.”

Swift had specifically requested they sing “Curious” together, a single off Kiyoko’s spring release Expectations that was about a relationship with a game-playing woman who has a boyfriend but won’t stop toying with Kiyoko’s heart. The two came in together on the chorus in front of an ecstatic crowd — some likely familiar with Kiyoko, others surely leaving new fans — singing:

But the thing is, Kiyoko doesn’t take herself too seriously. It’s her combined sense of humor and self-confidence that has crowds clamoring for more. Currently opening for Panic! at the Disco, Kiyoko’s influence can be seen nightly, as fans emulate her laidback androgynous athleisure style.

“It’s really cute,” Kiyoko tells INTO. “A lot of them will wear like Hawaiian shirts because I’ve worn several of them in my music videos. It’s just really fun. Some people dress up as like the characters from the music videos and it’s just really cool.” 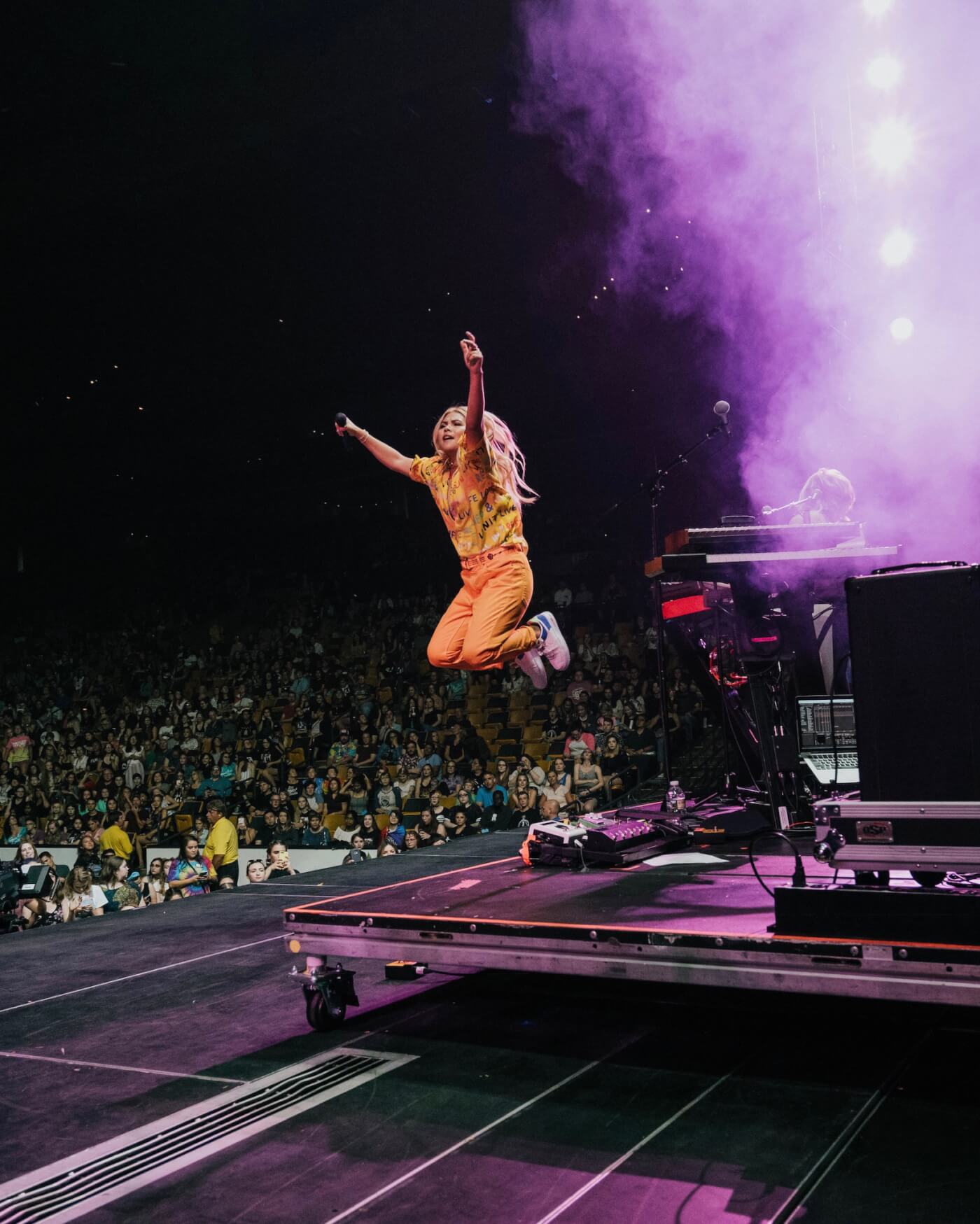 Kiyoko’s music videos are a huge part of why she’s become so successful in a world full of female pop stars churning out titillating tunes about sexual curiosity. She frequently stars in and directs her own videos opposite female love interests. She has male backup dancers who follow her lead in choreography that is often a mating call or messaging to the woman at the center of the song. They aren’t big budget affairs with multiple high-fashion costume changes or visual effects like some of her contemporaries; instead, Kiyoko’s videos serve as cinematic love stories that are so palpable, her fans sometimes have trouble believing they aren’t vignettes from her real life.

“People think I’m like a player because they see me make out with girls in music videos, but it’s because they watch the videos back to back, so it’s like ‘Oh, there’s this girl and this girl,'” she says. “But I’m not — I’m a very one girl kind of girl, you know?”

Cue the heart eyes and sighs from the young women who dream of being Kiyoko’s love interest. Kiyoko says she’s not one to kiss and tell (“I keep my private life private”), but she’s also more focused on her career right now.

“It’s kind of hard to date and to meet people when you’re on the road,” she says. “So I stick with my friends and family.”

Kiyoko has been an out lesbian throughout her musical career and has never shied away from anything related to being a part of an oft-ignored community that rarely gets to hear songs that don’t just speak to them, but for them. She doesn’t take the responsibility lightly, and says she feels lucky that she hadn’t experienced any kind of traumatic homophobia inside an industry that can often push back on artists who try to buck convention, especially when it comes to gender performance. And while Kiyoko doesn’t dismiss femininity, she’s got a certain kind of swagger that also exudes masc qualities rarely displayed by women pop stars, at least not consistently.

“Everyone has been — at least to my face — accepting,” Kiyoko says. “But obviously everyone has their own opinions. That’s what success is for me — doing so many other things because it’s not only success for myself but it’s success for other people and breaking those walls with those boundaries, people not caring about who you are or what you are and more so just about the music.”

The big boundary Kiyoko’s looking to break next is into Top 40. Because although she’s gone viral and shared a stage with America’s highly debatable best selling sweetheart, Kiyoko’s singles have yet to get radio play.

“That’s on my bucket list,” she says, “and the next step for me as an artist to kind of cross over into the mainstream. … For me to be on the radio and to have a hit and to be, I don’t know, popular and to be myself, and to be a woman, and to be half Japanese, and like girls, it means more — so much more. It’s beyond me, and so it feels like a big win for the community and just for us as people.” 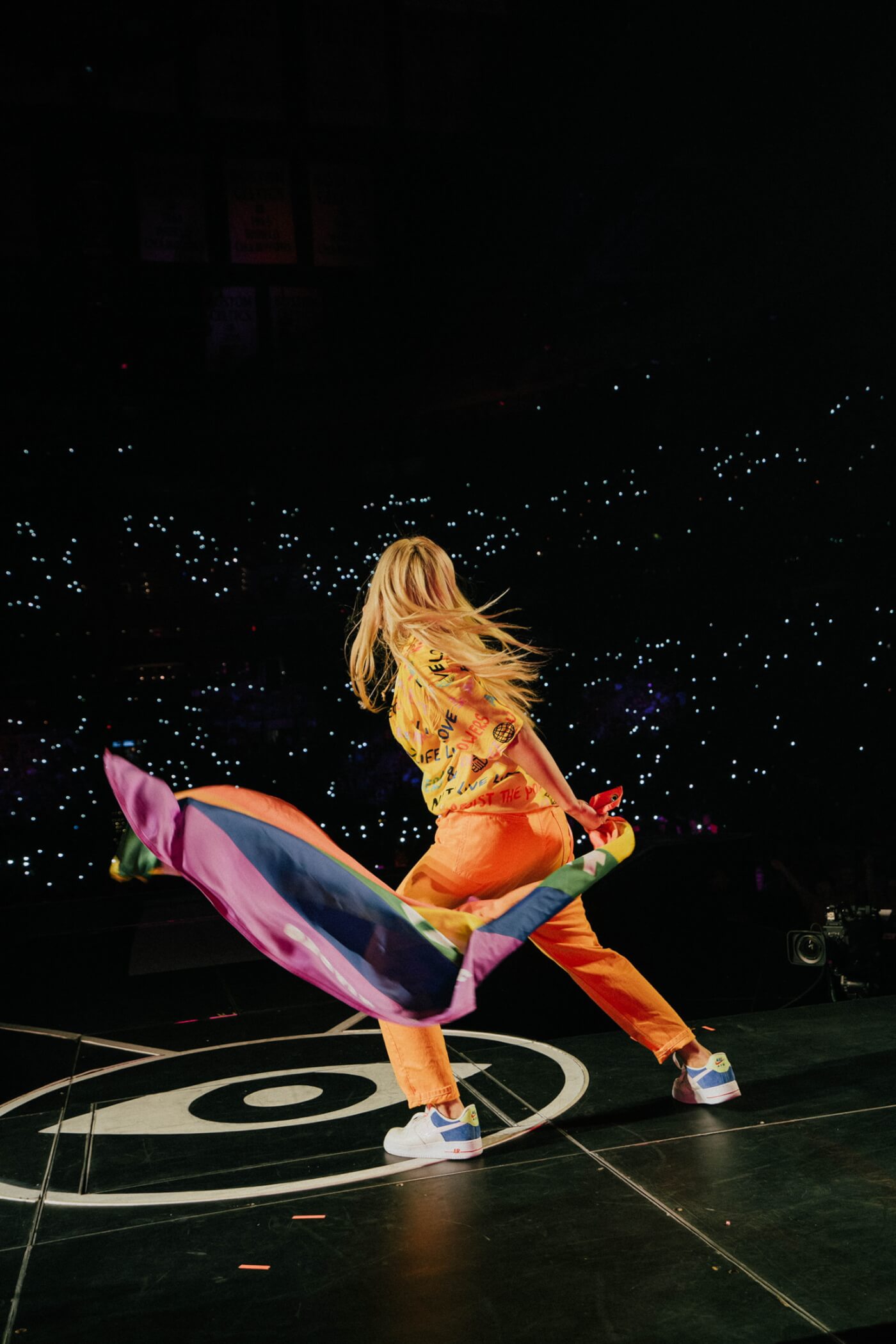 But first, she’s hoping for some other wins — at the upcoming MTV Video Music Awards. Fans can vote until Friday, August 10 for Kiyoko to win Best New Artist and Best Push Artist at the August 20th awards show, which would make her the fourth out lesbian artist to win a VMA. The first was k.d. lang in 1993 (MTV Video Music Award for Best Female Video), and the second was Mary Lambert as part of “Same Love” collaboration with Macklemore and Ryan Lewis for MTV Video Music Award for Best Video with a Social Message in 2013. Young M.A. was nominated for Best New Artist in 2017, and queer artists Lady Gaga, Miley Cyrus, Tyler the Creator, Lauren Jauregui of Fifth Harmony, Michael Stipe of R.E.M., Ricky Martin, Fergie, Whitney Houston, Mel B of the Spice Girls, Demi Lovato, George Michael, David Bowie, Sinéad O’Connor, The B-52’s, Lance Bass of ‘NSYNC have all won VMAs in the past as well. Yet somehow, the most iconic sapphic moment in VMAs history is probably the Madonna, Britney, Christina three-way kiss.

Fifteen years later, and 25 years after k.d.’s win for “Constant Craving,” Lesbian Jesus could take home two highly coveted awards and introduce her unabashed, out and proud music to those who still haven’t come across her just yet. She’s also hoping to meet other contenders for potential collaborations.

“I’m still new on the scene and so I am so excited to go to the VMAs and meet other artists because I don’t really know a lot of other people personally,” she says. She says it also gives her the kind of validation she’s been looking for from the industry.

“This whole journey has just been about the music and that opportunity — and my music journey has been like grassroots all the way up, so to be nominated for the VMAs and go to the VMAs — just to be invited feels like a victory. For me, personally, it’s a huge victory because I’m like OK, I’m getting invited to the popular group and being recognized and that’s just the best.”

Win or lose, Kiyoko will return to her home in L.A. after the VMAs and get to work on new videos and songs before heading back on the road for a European tour this fall. She says she’s not sure what she has planned for new tracks, but that she’s “definitely planning” to work with “What I Need” collaborator (and fellow QWOC) Kehlani again — “We love working together and I would love to make more music with her,” Kiyoko says.

What she wants most is for people to listen to Expectations, and for them to hear that she’s not stuck in one genre; that, like Hayley Kiyoko the actor/singer/dancer/director; half-Japanese lesbian pop star,  her music is multi-faceted; multi-hyphenated.

“My music is for everyone, and I really worked hard on my albums to make sure [the listeners] are able to connect and relate to something,” she continues. “It’s not always going to be the same.”

And taking the songs on the road has proven to be even better for that kind of fan-artist connection, the kind that Hayley Kiyoko fans get to experience up close and personal as she brings her rainbow flag on stage and sings about love, lust, and heartbreak — songs about other women. And Kiyoko is happy to hand the songs over to the individuals singing along in the crowd.

“I think what’s awesome about being an artist is every night you’re getting to explore new things,” Kiyoko says, “so you’re performing the same songs and your feelings can change, or you notice a word or a lyric that someone’s connecting to, and every night it changes.”