Roderick Ferguson realized he was gay as a teenager growing up in Bermuda. It was just about the worst thing that could have happened.

As a young boy growing up in the small island nation, Ferguson endured what he calls a “shocking level of cruelty” in a phone conversation. He tells INTO the other students in his school would frequently call him and tell him to kill himself. The culprits were usually his male classmates, but an incident that particularly sticks out to him is when a group of girls phoned to tell him another student had a crush on him.

When Ferguson took the bait, they pulled out the chair from underneath him.

“What, really?” he asked. “No, of course not,” his prank callers responded. “No one would ever want to be with someone like you.”

Ferguson claims the constant abusefrom verbal harassment to threats of physical violencehe suffered for years had a profound impact on him. After leaving Bermuda to attend college in the U.S., Ferguson attempted to take his own life during his freshman year. The virulent homophobia of his upbringing taught him the desires he kept locked away in his heart were a sentence worse than death.

“I learned that being gay was the most horrible thing that I could possibly be when I was growing up in Bermuda, and I was so ashamed of it that it has taken almost 20 years of living off the island and a lot of work on myself to overcome that,” he says. 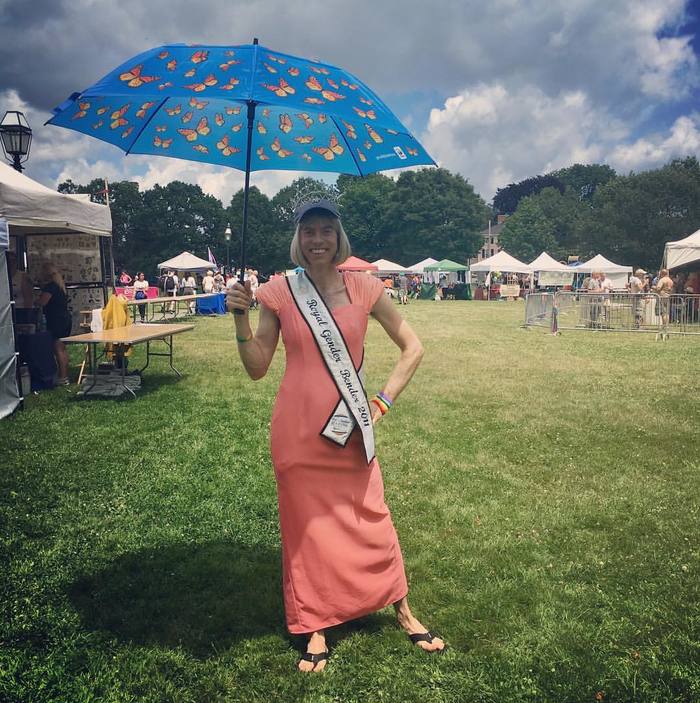 Now 38 and pursuing a stand-up comedy career in New York City, Ferguson hopes to make a difference in the island of his birth by fighting the discrimination he faced. After the Bermuda government revoked marriage equality in Februaryjust months after a Supreme Court ruling allowed same-sex couples to wed the first timehe has filed a lawsuit to overturn the decision.

Although Ferguson hasn’t lived in Bermuda in two decades, he believes it’s important to take a stand and say: “No, it’s not OK to take this away.”

In February, the country of just 60,000 people became the first-ever nation to rollback the freedom to marry after Gov. John Rankin signed into law the Domestic Partnership Act (DPA). The legislation nixes same-sex marriage in favor of domestic partnerships.

The Domestic Partnership Act is viewed as a compromise between LGBTQ people and religious groups in a country which remains divided on the subject of marriage equality.

Although Bermuda has laws in place which prohibit anti-LGBTQ bias in housing or employment and allow same-sex couples to adopt, 69 percent of islanders voted against marriage equality in a 2016 referendum, while 63 percent opposed same-sex unions. The result would be tossed out due to low voter turnout, however.

During his conversation with INTO, Ferguson stresses several times that this vote isn’t reflective of the entire population. Much of the country is very welcoming. Others, he claims, simply “don’t know what it means to be LGBTQ.”

But conversations in Bermuda tend to be driven by “those who speak the loudest,” says Mark Pettingill, the civil rights attorney who fought to legalize marriage equality in the courts. When the Bermuda Supreme Court ruled that prohibiting same-sex couples from marrying was unconstitutional last year, 1,000 people marched on Parliament in protest.

“It’s a small country,” Pettingill tells INTO. “If you gather 1,000 people, you’re making a pretty significant statement in regards to the degree of opposition.”

Supporters of the bill claim domestic partnerships retain a vast majority of the benefits and protections afforded to married couples. On its website, the Bermuda government says same-sex domestic partners will still have the rights of inheritance and pension, as well as the ability to make key medical decisions for each other.

But critics claim “separate but equal” isn’t the solution to Bermuda’s problems.

“This legislation creates a ‘watered down’ version of rights, leading to a separate-but-equal status under the law,” the Rainbow Alliance of Bermuda said in a statement after the House of Assembly approved the Domestic Partnership Act in December by a 24-10 vote. “Ultimately, no separate-but-equal measure allows for equality or justice.”

To date, at least eight same-sex marriages have been performed in Bermuda during the nine months in which equality has been the law of the land. The bill does not negate these partnerships but merely prevents new marriages from being performed.

“I can’t get married in Bermuda, whereas other gay couples could,” Ferguson says. “I don’t want to take away the rights of the gay couples who got married, but it’s pretty obviously unfair to anyone else who’s not allowed to join them.”

The apparent absurdity of the current situation in Bermuda has led to widespread international criticism. GLAAD CEO and President Sarah Kate Ellis called the legislation “a denigrating and unnecessary strike against loving and committed LGBTQ couples,” while British Prime Minister Theresa May claimed she was “seriously disappointed” by the decision.

Some have even called upon the Cruise Corporation, which operates 24 ships on the picturesque island, to pull its operations from Bermuda. Its tourism industry is the country’s lifeblood: Foreignersspent $431 million on its shores last year.

Advocates say the backlashwhether in the form of a boycott or a court challengeis critical to ensure the rollback of same-sex marriage doesn’t spread to other countries.

Bermuda’s decision is the only one of its kind, but it followed a year in which queer and trans rights have been under attack in nations across the world. Countries like Azerbaijan, Egypt, and Tajikistan launched brutal crackdowns on their LGBTQ citizens, while more than 100 men suspected to be gay or bisexual were rounded up, beaten, and tortured in Chechnya.

Since taking office in 2017, critics claim U.S. President Donald Trump has persistently chipped away at the gains made by the LGBTQ movement in recent years: from employment nondiscrimination for federal workers to protections for transgender students.

“We want to ensure that injustice is stamped out everywhere,” says Pettingill, who has signed on to represent Ferguson in court. “Otherwise it becomes like a virus. It starts to catch on.”

Ferguson will get his day in the Bermuda Supreme Court in May, just days before marriage equality is set to be struck down. As a former bullied queer youth who hid from his peers at school to escape persecution, he hopes to show LGBTQ kids growing up in Bermuda today they can live without shame and take pride in who they are. They no longer need to hide.

“There’s always been a part of me that’s still sad that I couldn’t stay on the island to change hearts and minds there and to help the fight for LGBTQ rights,” he claims. “This opportunity is a way for me to do something in the place that I’m from.”

Note: Ferguson has launched a crowdfunding campaign to raise money for his lawsuit. You can donate here.