Is the world ready for a darkly comedic take on bullying, queerness, and post-Parkland gun violence through the satirical purview of a new Heathers? If you caught the show’s controversial pilot episode within the brief window of its pre-premiere launch, you might already know the answer. But the Heathers reboot, based on the 1988 cult film, was pulled just days ahead of its planned March 7 television debut, with Paramount Network citing the recent murder of 17 students at a school shooting in Parkland, Florida. (The premiere was available on Paramount’s site on Feb. 21, a week after the Feb. 14 shooting.)

Advance reviews drew both savage take-downs–it’s “a Trumpian, LGBT-bashing nightmare,” wrote The Daily Beast–and praise, with TVLine applauding the small-screen adaptation for being “wickedly witty” and radiating “unexpected heart.” Entertainment Weekly wrote, “The Heathers reboot won’t fix what’s broken, but let’s not pretend our failed comedy is remotely as disturbing as our failed gun laws,” expounding on the show’s fifth episode, which includes a smartphone game simulation of a high school shooting.

INTO spoke at length with Heathers star Brendan Scannell prior to the network’s decision to delay the series indefinitely. In our interview, the 27-year-old out actor claps-back atThe Daily Beast’s critic, LGBTQ writer Samantha Allen, which many suspect had a lot to do with the backlash and subsequent series delay. He also poses a defense of the show much in the same way its creator and writers haveby asserting that the show is from LGBTQ writers and directors, and that its skewering is in the name of subversion (“The show’s not trying to solve the world’s problems–the show is satirizing them”). 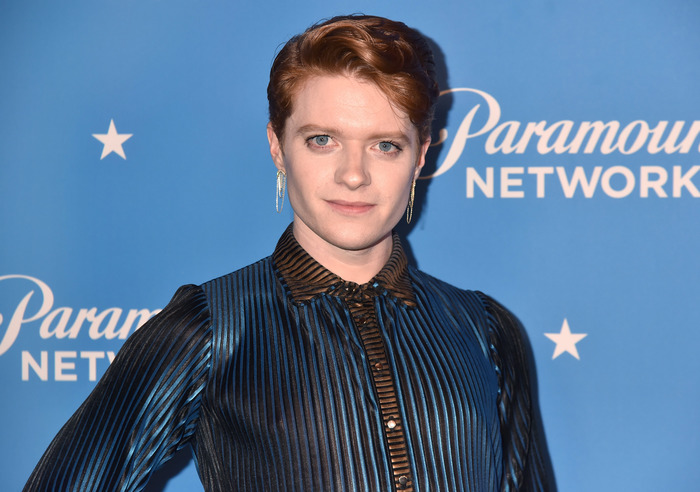 What do you think was the original appeal of Heathers to the LGBTQ community?

What was great about the movie was that it was these four girls who just had the best lines and the best clothes, and the movie was written by a gay man [Daniel Waters]. So, it was four teenage girls insulting each other like gay men insult each other–there was that appeal. Also, it’s a cult classic, and the LGBTQ community latches onto projects or pieces of art that other people pass over and nurture them and make them important, and Heathers became one of those. I’m hoping as people watch [the show] they realize it’s coming from a real place of love for the LGBTQ community.

One line in the show jokes that you can’t take a Grindr dick pic without a water bottle next to you, for perspective. You have to be queer to write this stuff, right?

The show is very LGBTQ. [Writer and showrunner] Jason Micallef himself is gay and Leslye Headland, who directed the pilot, is a lesbian. Eight out of 10 episodes were directed by LGBTQ directors, which is not common. I feel really thankful to be a part of this show.

The show is not necessarily trying to address all of these issues in a way that feels very safe and responsible. I’m trying not to read anything, but The Daily Beast just called Heathers “a Trumpian, LGBT-bashing nightmare.” It’s like, OK, bitch, you obviously have no idea what you’re talking about. It’s so funny, because, yeah, it’s written by the community, but one of the fun things about the show is that it lambasts humorless people, too.

The show’s point of view isn’t that people should be less sensitive, but that strongly, staunchly held beliefs in any directions have the ability to, if taken to extremes, have real-world effects on high schools and communities. One of the main components of the show is teachers who don’t listen to the students, which is the whole point of the show–it’s just this community that’s not paying attention to everything that’s going on.

What are some topics the show covers that you are especially proud of?

Interestingly, there’s an episode [about] the idea of teachers being armed. The show really lambasts that idea for how unsafe and stupid it is, and how it doesn’t make any sense. That’s one of the issues that I think is really pertinent. And the effects of bullying on both the psyche of the bully and the bullied are such a huge component of the show. And it’s not pretty. The show doesn’t wrap everything in a bow with a lesson, because our culture doesn’t.

Have you seen Strangers with Candy? It’s the Amy Sedaris show from the ’90s, and at the end of every episode, she learns the wrong lesson. Something horrible happens. That’s what our teachers do and that’s what our school does [in this show], and that’s a reflection of things happening in our society, where violence can happen, opioid-use happens, or violence against black people happens. Then, people come to the wrong conclusion and institute the wrong policies. So, I think the show is scarily true to life in that way.

I thought the long, bloody suicide scene at the end of the second episode was brutally honest about the fact that suicide oftentimes goes undetected until it’s too late.

And that everyone calls Heather McNamara (Jasmine Mathews) a slut for sleeping with a teacher instead of disparaging the (male) teacher. It’s satire. We’re not saying that’s the way it should be. We don’t think Heather is a slut; that’s what our culture does to young women. And that’s kind of the essence of the show.

During one episode a teacher goes on a rant about art and why it’s necessary it be bold. Is that the show’s way of addressing itself?

Yeah, the thesis of the show is just that everyone is kind of an asshole. There’s been a lot of internet discourse about what it means to have Heathers, and what it means to have a black Heather, a body-positive plus-size Heather, and a genderqueer Heather on this show. One of the great things about it is that because of our culture now, and because of the internet in large part, these communities still face way more discrimination in high school, but anyone can be a Heather with the power of the internet and the power of confidence and the power of self-righteousness. 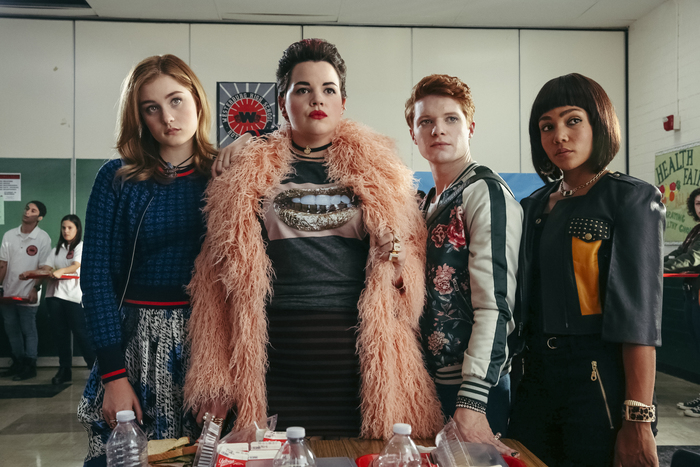 How was the audition process for this role the same or different from other auditions you’ve been on?

I mean, it was different in that I got it [laughs]. This is basically my first TV job. I was at a birthday party for my friend and the next day he texted me: “Have you heard of the Heathers reboot?” And it was like, “Why are they rebooting Heathers? That’s so stupid.” Then I read the script, and I guess Jason had seen me at the party and they were having a really hard time casting this role and he said, “We just need someone like that.” I was probably, like, twirling or something. My friend was like, “That’s Brendan; he’s kind of funny. You should see him for the role.”

Then I went in and got it, after going out for things for three years and just getting notes that were like, “Good–just too gay.” Going in and having to continually scale back my queerness. This was the first role I read where I could take it to the max, and while shooting it, I discovered a lot about myself in a way I wasn’t expecting.

What does it mean to you to have a genderqueer Heather?

It’s cool to play this young queer character who’s so unabashedly feeling himself. He’s just so unapologetic and in your face and defies categorization. I think that so much of what we’re trying to do in our culture is pin people down to labels or categories; even within the LGBTQ community we’re kind of constantly asking, “What are you? How do you identify?” And this is a character who isn’t here for those questions.

It’s a really cool contribution to the larger representation of different types of LGBTQ characters on screen. I mean, I’m still white and the majority of LGBTQ characters on screen are still white, so there’s always work to be done, but when I was in high school, there were fewer options to look at as to what I could be and what I could emulate. Kids who are feeling in that in-between space and want to wear a skirt and then a suit the next day and want to defy the gender patriarchy, maybe Heather can be a little bit of inspo for that.

The show’s not trying to solve the world’s problems–the show is satirizing them. So that’s always good for me to keep in mind when talking about this stuff. I’m hoping it’s entertaining, and I hope that it contributes to larger representation. And I hope that queer actors see Heathers and go, “You know what? I wanna be the next person on television who’s defying and reinventing what it means to be LGBTQ on screen.”

Images via Paramount and Jeff Kravitz/FilmMagic for Paramount Network