We’re just four episodes deep, but HBO’s new drama Here and Now has already given us everything we need.

From Alan Ball, the out creator of True Blood, comes a show that tackles everything: mental health, the scary reality of Islamophobia in America, and tensions in a racially diverse non-biological family. The show tells classic stories about love and relationships while engrossing its audience in wonder and existentialism dread. But one of Here and Now’s most positive qualities is its portrayal of gender and sexuality. The heartfelt thriller explores diverse stories about gender fluid and queer people with grace and dexterityand we’re here for it.

The Portland-based show centers around Ramon (Daniel Zovatto), a 22-year old Colombian gay man who begins having hallucinations that stir up inner-tensions in his family. Ramon’s parents, played by Holly Hunter and Tim Robbins, adopted him and two of his siblings from varying developing nations, and then had one biological child of their own, Kristen. 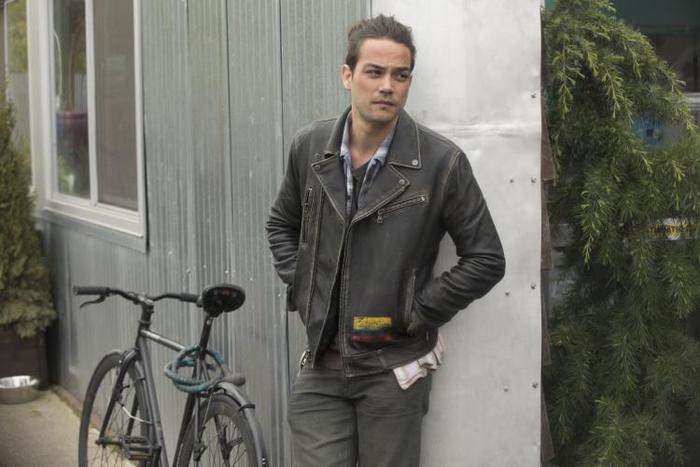 In the inaugural episode, Ramon nurtures a flirtation with a man who works at his local laundromat, Henry. What begins as playful repartee and afternoon delight quickly devolves into something deeper when Henry more or less invites himself to a birthday bash at Ramon’s parents’ house.

Ramon warns Henry that his mother has a proclivity toward histrionics when it comes to Ramon’s love lifeshe’ll probably treat him like Ramon’s soulmate, a new family member. During the celebration, his mother Audrey does just that, and Ramon is quick to remind her that he’s just gay, not a hero. The sardonic commentary on overprotective mothers and their gay offspring is sharp and relevant in ways that most queer people can relate to.

At the party, Ramon has his first jarring hallucination, rattling the entire family and Henry, who pulls Ramon closer and cradles him, rather than run from something so intense. While each family member has their own romantic interests and love stories, Ramon and Henry’s stands out. Henry always encourages Ramon to trust and find solace in him, rather than push him away because of this giant life moment that happens to be occurring during the earliest stage of their relationship. They’re always encouraging each other to be their truest selves and staring longingly into each other’s eyesit’s swoon-porn.

I find Ramon and Henry’s story endearing for the same reasons queer men love Call Me By Your Name: it’s a beautiful shared love that blossoms organically between two men. It’s rare we get to watch that sort of anecdote play out on TV–especially between an interracial couple.

Ramon is giving us some much-needed gay Colombian representation, and it’s refreshing to see his character handled so delicately. Ramon has so many intriguing qualities; besides from being a stoner turned amateur video game developer, he also has so much depth, nuance to his extremely vulnerable, mentally fraught identity.

In Sunday’s episode, Ramon wakes up and realizes Henry has disappeared into the night, having left his phone behind. Here and Now has an underlying element of mystique and the supernatural, so it’s hard to say what happened to Henry. Even though he apparently walked out, it looks as though he quite literally evaporated into darkness, adding another layer to Ramon’s grueling life.

But outside of gay men, Here and Now tackles gender identity too, in a character who may even be more embattled than Ramon is. Marwan Salama plays Navid, a Muslim-American teenager who goes to school with Kristen. At school, Navid presents as an everyday American teensomewhat socially conscious, neither here nor there fashion-wise, partly timid, and partly sarcastic. But at home, Navid is a gender fluid queen who wears stylish hijabs and a full maybe-it’s-Maybelline face of makeup.

Navid lives a timely swapped version of an already-modern narrative: It’d be easy to assume that Navid was out to friends, but not to his conservative Muslim parents. However, it’s actually quite the opposite. The young teen is only out to his parents. His father, an intelligent, ex-religious psychologist insists that Navid only reveal their true self in the house. Claiming that his son is already a target in America as a brown, Muslim teenager, he demands that Navid only practice religion and express their gender at home, where it’s safe. In a heart-wrenching discussion with his wife, Navid’s father reminds her, “This is America,” and that Navid will be in serious danger as a gender fluid Muslim kid in this racially-tense country.

In episode four, Navid comes out to Kristen when she comes over to do a school project, and they proudly answer the door in full smoky eye and hijab. Kristen fawns over Navid in the same way she fawns over her brother Ramonas the only white child in a family that’s diverse in ethnicities and sexualities, she always laments about how uninteresting she is. She quips to Navid that she “wishes” she were gender queer. Kristen is a purposefully obnoxious, candid, and humorous moment of respite in a show brimming with intensity and heavy subject matter.

Here and Now is one of my new favorite shows because of the wanderlust and nihilism it inspires, and the diverse LGBTQ representation is such an added joy. It’s mollifying to see a show that isn’t afraid to dissect the real social issues dividing our country right now, but in ways that are both clever and enjoyable to watch.

Alan Ball is no stranger to queer TV, having created True Blood and Six Feet Under, which also prominently feature LGBTQ characters, and I’m happy to see he’s continued to center and elevate queer voices. See, (straight white predominantly male) TV writers? It’s absolutely possible to joke about sexuality without being offensive or insultingas long as it comes from an informed place, you too can write an “uninteresting” white character who fangirls over diverse people.