SuitWatch 2019 kicked off Sunday night at the 76th annual Golden Globe Awards. Our favorite film and TV actresses tore through the red carpet like a Category 5 hurricane, and while the floor-length gowns and designer dresses were certainly something to be ogled, I personally had my eye on the gayer fashions.

Last year’s Golden Globes carpet was defined by the “blackout” Time’s Up protest, and I was hoping this year’s would be marked by menswear, given the memorable 2018 trend (see: Ocean’s 8 press tour, the Cannes red carpet, everything Blake Lively wore in A Simple Favor). But I have to be honest, the pre-show was basically as heterosexual as a Reddit forum for adult Disney fans. Although there wasn’t much to work with, here are the best queer girl looks from the 2019 Golden Globes. 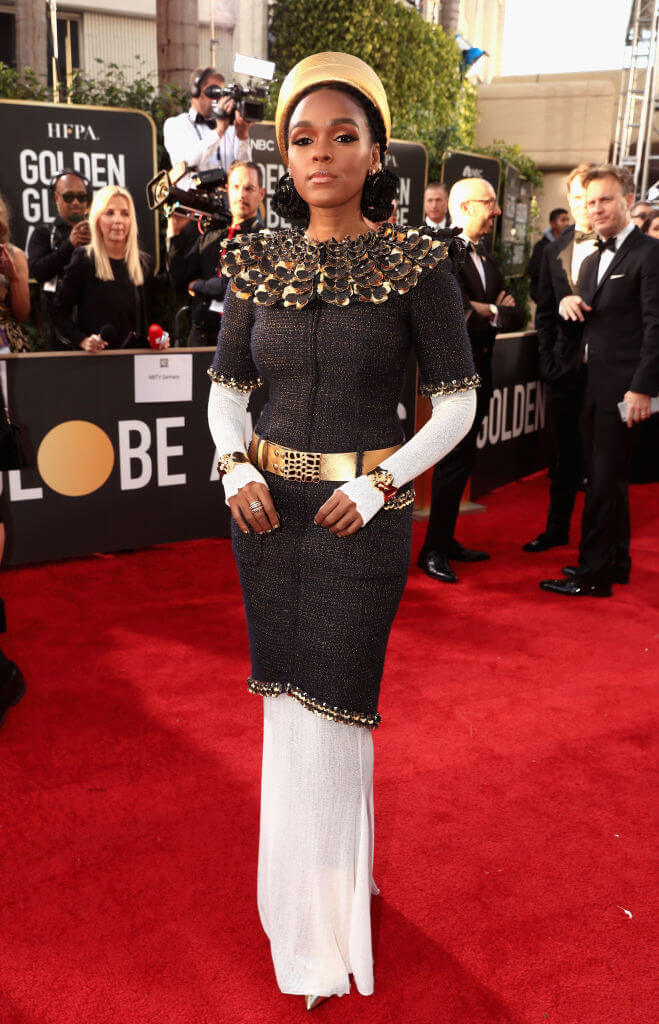 I’m not sure what the fuck is going on here, but I adore it. The out queer Janelle sported a golden headpiece and a gilded dress that’s basically the formal wear equivalent of a gay girl wearing a Billabong t-shirt over a long-sleeved tee. She’s serving belted, layered pansexual glory and I want her to step on me. 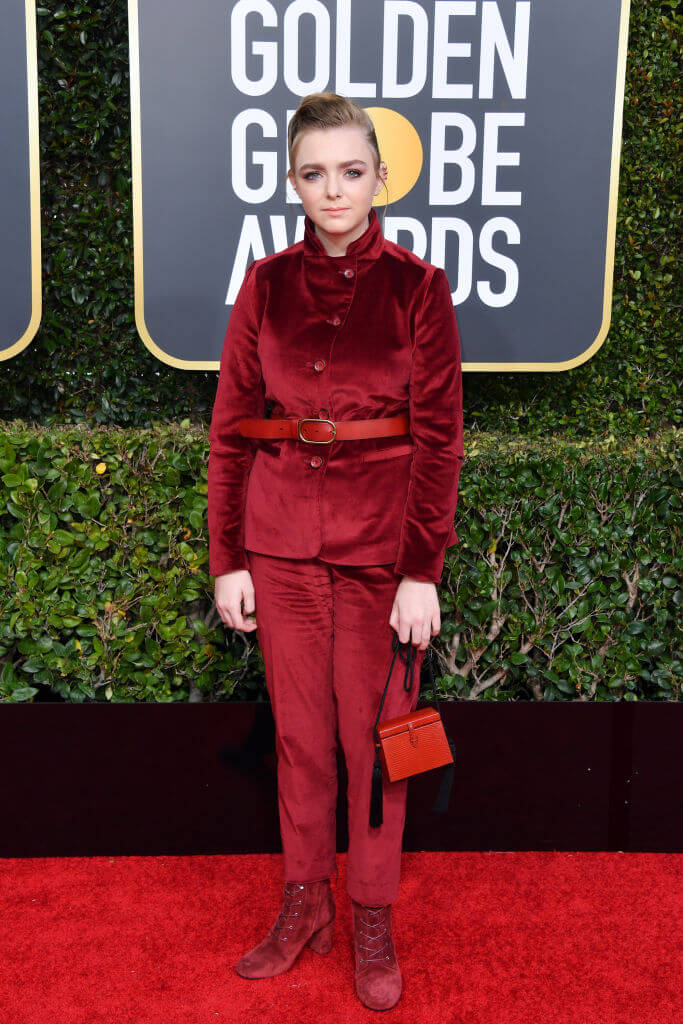 Fifteen-year old Elsie Fisher, the Eighth Grade star nominated for Best Actress in a Motion Picture – Musical or Comedy, wore an adorable red velvet collared pantsuit to kick off her first ever awards season. It’s the perfect outfit for walking up to an old dude and saying, “Move, my suit is velvet.” 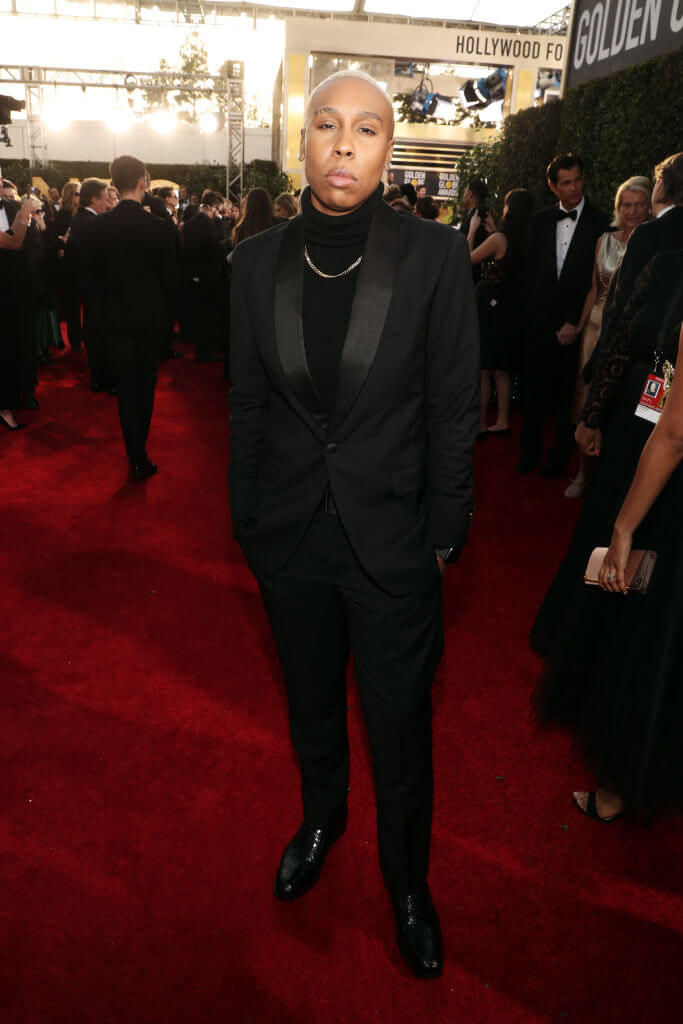 Presenter Lena Waithe was somehow the second best dressed bleach-blonde lesbian in a jet-black suit, right after Chris Messina, who stunned straight women, gay men, and even lesbians with his dirtbag-yellow locks. But Lena Waithe looked dapper as ever in a black turtleneck, gold necklace, and mean mug that screams, “Be gayer.” 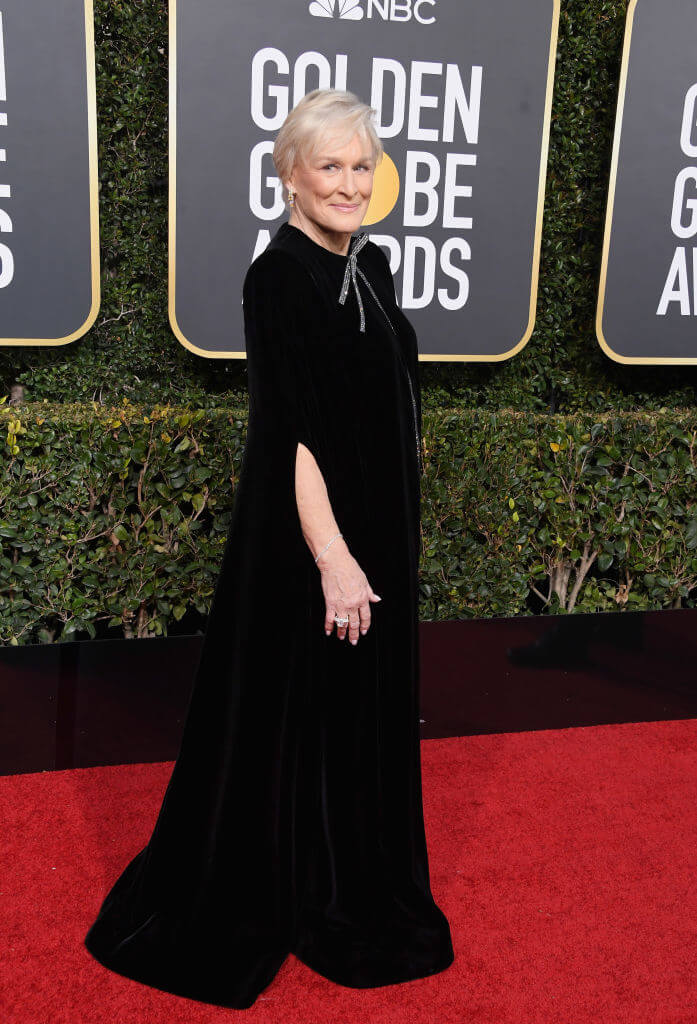 Nominated for her role in The Wife, Glenn Close wore a fucking velvet cape. I think at a certain point, when you’re of age and you’ve been in enough award-winning movies, you just sort of say “Fuck it, I’m wearing a cape” and go to the Golden Globes looking like Professor McGonagall’s twin lesbian Auror. It’s a power move. This is the best red carpet cape since Lena Waithe’s rainbow flag piece at the Met Gala. Next year, we’re surpassing capes and going straight for robes. Gilded robes 2020. 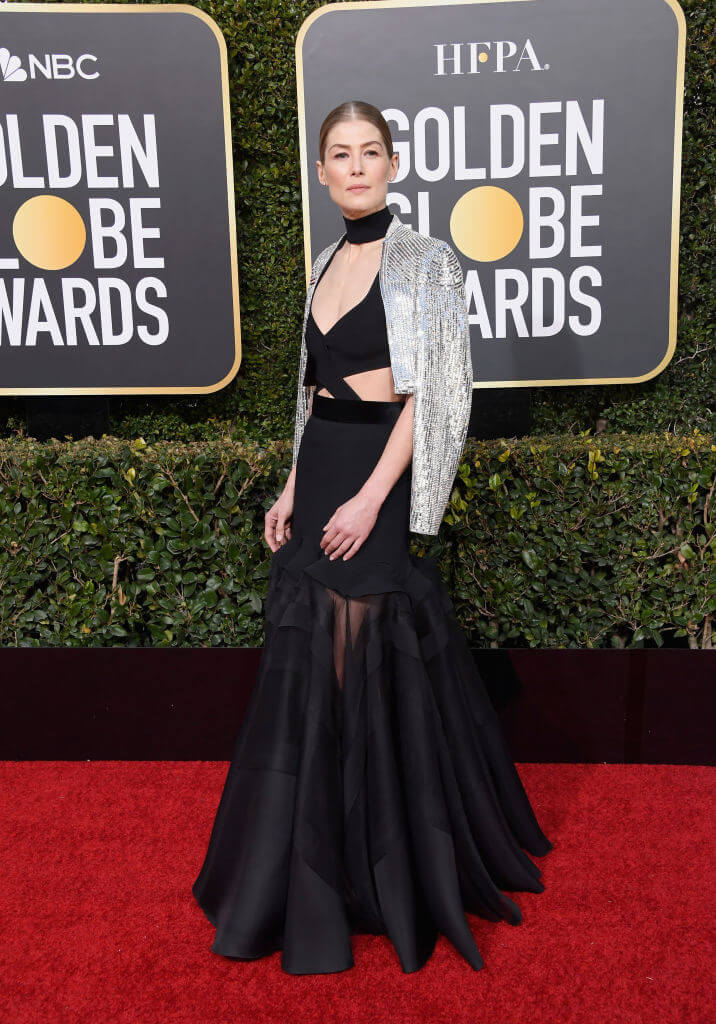 Sure, I’m the Chairwoman of SuitWatch 2019, but that doesn’t mean I can’t appreciate other queer getups. For example, Rosamund Pike, nominated for her role in A Private War, wore a jacket that says “I robbed Michael Jackson’s grave for this,” and a thick choker that’s perfect for walking into a gay bar and waiting for a lesbian to say “I think I’ve seen you on Hinge.” Great work, Rosamund. Great gay work. 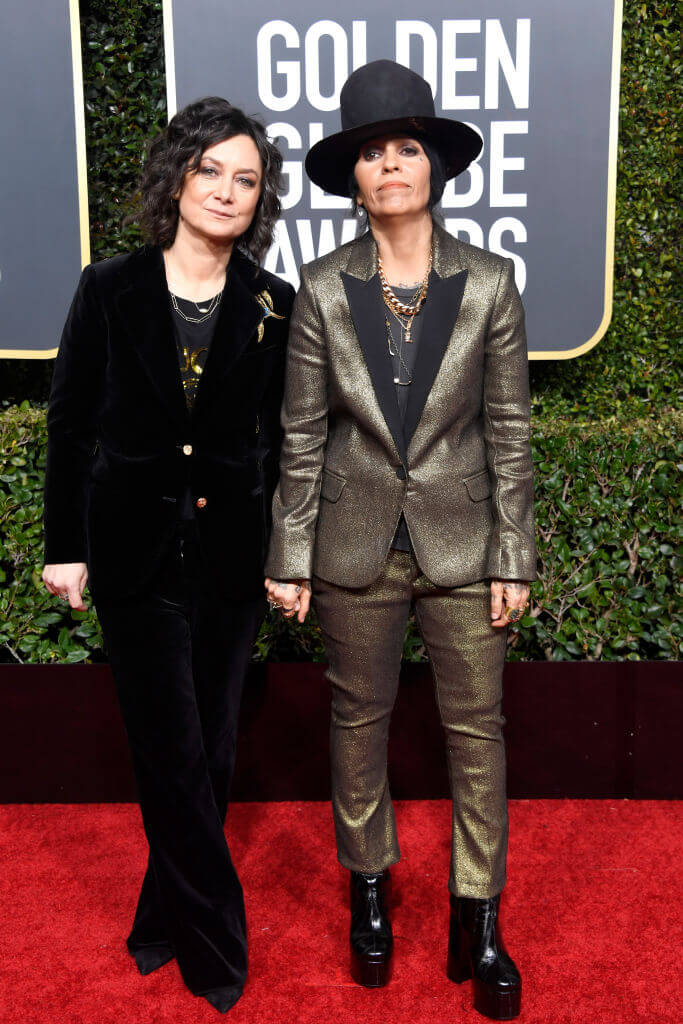 Linda Perry, the queer 4 Non-Blondes songwriter—nominated for Best Original Song in Dumplin’—sported a shimmering metallic suit accompanied by that fucking top hat, which is, at this point, basically an appendage of hers rather than an accessory. The hat seems to grow taller and taller with each appearance—it began as your average Silver Lake Lesbian Hat, then over the years competed with Pharrell for Most Longitudinal Hat, and today, it can be scaled by any of the Spider People in the Spider-verse. 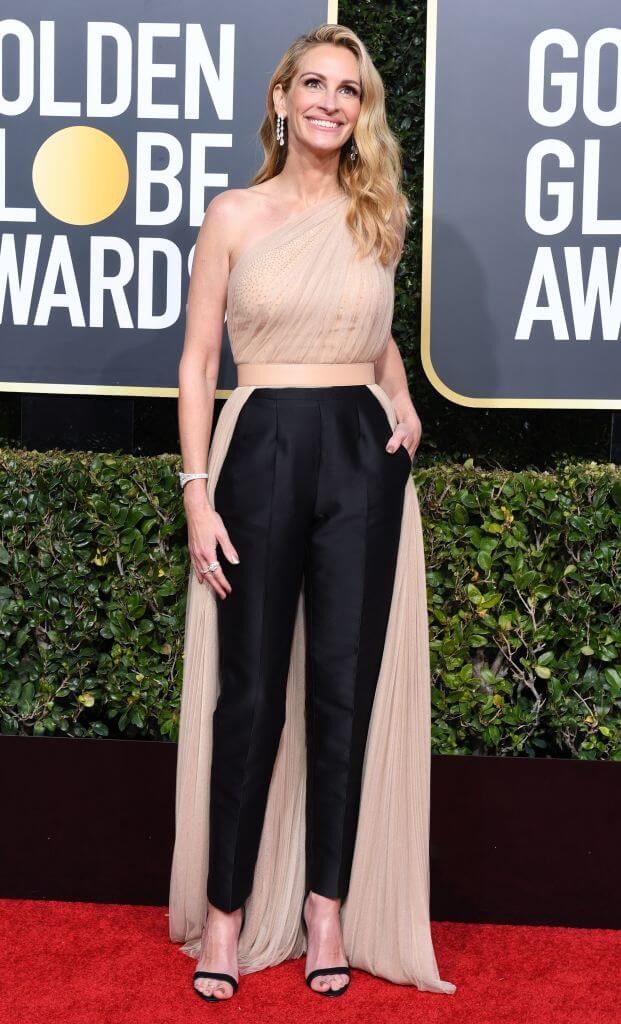 The first photograph I saw of Julia Roberts at the Golden Globes was from the waist up, and I thought, “snore.” The next one was a full-length shot and I hurled myself face-first through a plate glass window. The actress, nominated for her role in Amazon’s Homecoming, wore a mashup of black tapered trousers with a tan dress, which was the most ambitious crossover outfit in history. Roberts has worn numerous power-suits on red carpets past, so I’m elated that she stuck to her roots. Pierce my cartilage with your stilettos, queen. 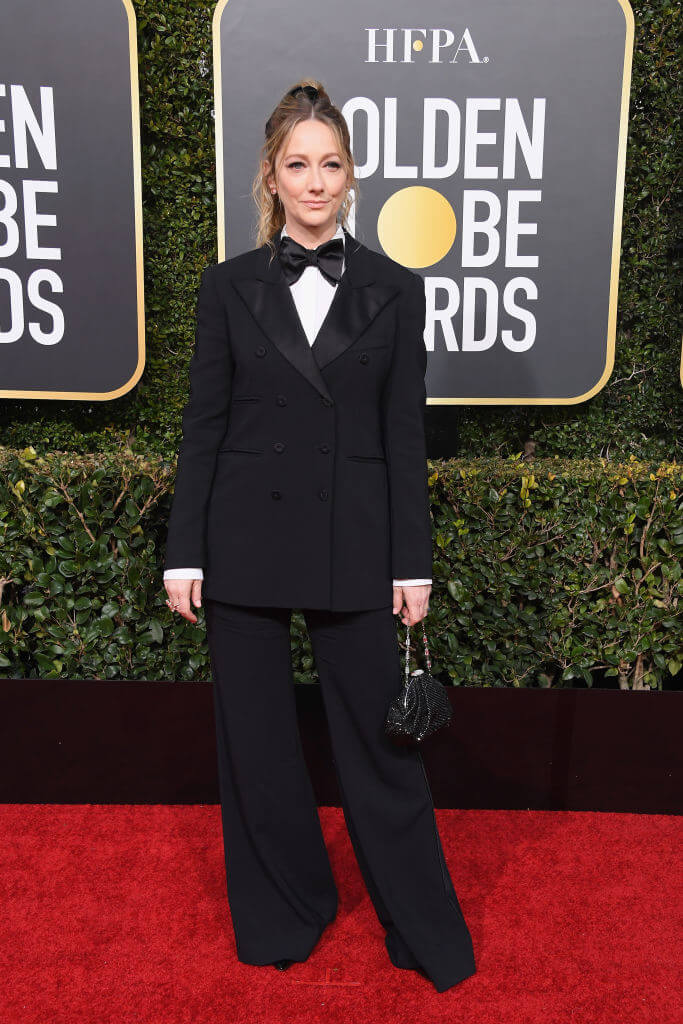 Styled by Karla Welch, Judy Greer stormed the red carpet in an Alberta Ferretti suit and goddamn oversized bowtie, winning the Gay Girl Golden Globe Fashion Awards by a landslide. Her flare pants are perfect for openly vaping in a movie theater while straight people glare at you even though you’re just doing this for your people, who’ve been previously oppressed for centuries, and didn’t have the same opportunities as you do now, like being able to vape in a movie theater. Greer’s can simply be called “Lesbian Cater Waiter Who Fucked Your Bridesmaid and Ruined the Whole Wedding.”

And a special shoutout to the queer male looks of the Golden Globes red carpet, like twink icon Timothée Chalamet, who sported a literal metallic harness, and Billy Porter of Pose, who scalped Glenn Close with his bedazzled, reversible cape.