Back when Lara Croft first started raiding tombs in 1996, the world was a very different place.

Forced to compete with short Italian plumbers and speedy blue hedgehogs, Tomb Raider dared to do something different, celebrating a female hero who ushered in a new age of gaming while quite literally looking to the past. As a powerful icon in her own right, it quickly became evident that men wanted to be with Lara Croft and women wanted to be her.

That’s not the whole story though, so like any good archaeologist, we must dig deeper to find the truth.

Despite being marketed primarily as a sex symbol in her early years, the strength of Croft’s character galvanized a far more diverse fan base than Core Design probably ever imagined possible. Beyond the heteronormative focus on Lara’s triangular breasts, LGBTQ fans drew inspiration from Tomb Raider for far more important reasons, transforming Lara into a queer icon who transcends her origins as a mere plaything.

Even back in the days when straight men wasted hours hunting for the nude cheat code that never was, the impact of Tomb Raider was still inextricably linked with the queer community at large. In the US premiere of Queer As Folk, Lara was explicitly mentioned while Brian and Justin whacked out their own dual pistols and further references to Tomb Raider were also made in the original version of the show, too.

So why is it that gay characters like this seem to favor playing female heroes over their male counterparts?

While it turns out that men in general virtually gender-swap more than women anyway, studies show that queer men in particular empathize more with female avatars and will usually choose them first if given the opportunity. Dr. Catherine Flick from De Montfort University, UK, postulates that this practice may enable men to explore the feminine side of being desirable or even sexual relationships with other male characters. With the lack of openly queer avatars available to select in gaming, it may also be true that gay men simply identify better with women as they too are often underestimated or treated as “lesser” somehow.

In a market saturated with hyper-masculine protagonists, there’s something uniquely admirable about the way that Lara Croft disregards traditional femininity, something that appeals to queer men and women alike. While hetereosexual men might consider Lara’s physical attributes to be her most appealing asset, the rest of us celebrate the innate qualities that position Croft as an outsider on her own terms.

Despite Lara’s upbringing, no one can force her to be anything except who she wants to be, and this is particularly appealing to queer fans who possess their own personal definition of what gender really means to them.

For queer women in particular, though, there’s an extra level of appeal to Lara Croft’s mystique that extends beyond her physicality. You only have to look at the star of Tomb Raider to see that she’s conventionally “womanly,” something which early marketing capitalized on to a voyeuristic degree, but it’s the way that this contrasts with her persona which makes Lara so unique. Unashamed of her curvy (or occasionally triangular) body, Lara refuses to conform and give her male associates what they want. Much like the queer women who play her games, Lara breaks with convention and stands tall on her own feet, never relying on the men around her for rescue or physical comfort.

It’s no coincidence that “female adventurer” was an old-timey euphemism for lesbians as both groups venture far outside of what society expects from them. Because of this, Lara Croft was an icon to many from the moment that she arrived on our consoles. However, recent developments in the mythos of Lara have cemented this appeal even further among her queer fan base, and it’s all thanks to the 2013 reboot.

“A Survivor Is Born”

After years of playing around with the same formula, the development team decided to start again from scratch in 2013 and rebooted the origins of Lara Croft for the release of Tomb Raider, the tenth title in the franchise. Gone was the cocksure adventurer and in her place stood a younger Lara not yet hardened by years of shooting bats and trapping butlers in fridges. More than any other title in the series so far, Tomb Raider focused almost entirely on the need for survival, stranding a baby-faced Lara on the mystical island of Yamatai with no one around to help except for Samantha.

Croft has worked with a number of people over the years, but none have felt as fully realized as Samantha, another survivor of the shipwreck that stranded them both on the island together. Throughout this chapter of the Tomb Raider franchise, Lara’s need to keep Samantha safe is what drives the narrative above all else, leading some fans to speculate that the pair share more than just friendship.

Tomb Raider writer Rhianna Pratchett famously declared once that part of her “would’ve loved to make Lara gay.” While this is hardly confirmation that Croft is indeed a lesbian, it’s hard not to read more into her relationship with Samantha in their first and only game together because of this. Between the lingering smiles and fierce loyalty that the two characters share for one another, the romantic tension between them both was palpable throughout and towards the end, Lara even rescued Samantha while she wore a bridal-like dress.

By constructing the ending in this way, the team behind Tomb Raider simultaneously subverted gender expectations while also loading the pair’s relationship with a queer subtext that’s impossible to ignore. 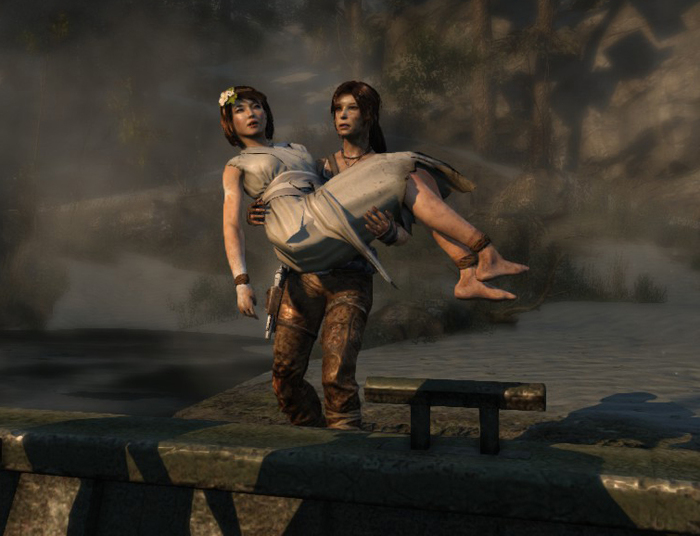 Tomb Raider: The Angels of Darkness

In a discerning analysis of the game’s potentially queer themes, Paste Magazine came to the conclusion that Lara and Samantha are just friends, challenging fans to “Write all the fan-fiction [they] want”. Whether the game’s romantic subtext was intentional or not, this didn’t stop LGBT fans from taking on this challenge in their droves, writing everything from tasteful explorations of Lara’s sexuality to far more explicit offerings that found our hero raiding tombs of a different sort.

On top of that, there are a whole host of Tumblr sites dedicated to fan art that ship the pair too and forums continued to debate the topic long after fanfare over the game had died down. This all makes Samantha’s absence in the sequel Rise of the Tomb Raider all the more harder to bear for LGBT fans who see her removal from the franchise as yet another example of gay erasure in mainstream media.

For every forum user who is grateful for “visibility” from a “major icon” like Lara, there’s a whole host of others who argue that Croft is gay with a tad more bluntness: “Lara and Sam eye-fucked so much I don’t understand how neither of them got pregnant.” Alongside this, forum titles such as ‘Is lara croft a lesbian?” and “Just finished playing Tomb Raider… SO MUCH LESBIAN SUBTEXT” make it clear that speculation surrounding Lara Croft’s sexuality is vitally important to a number of fans still and it’s easy to see why.

Lara has always been a strong role model for queer men and women alike, but the 2013 reboot added another layer to this, transforming our hero into a outsider forced to overcome seemingly impossible odds. This survivor narrative draws explicit parallels with the often harsh process of coming out that enabled LGBT fans to empathize with Lara like never before. She, too, struggled to reject the life that she was born into in order to become something else, but through this, Croft still found a way to remain happy doing what she loves. For any queer fan seeking inspiration or even just reassurance, Lara’s fight to stay true to herself is more awe-inspiring than any death-defying drop or T-Rex showdown.

Whether you read into the various hints dropped throughout the franchise or simply accept that Lara’s sexuality will forever remain a mystery, it’s impossible to deny that queer people still need heroes who truly represent them in the games that they play. However, until the gaming industry overcomes its fear of pushing LGBT protagonists front and centre, it’s heartening at least to know that there are characters like Lara Croft who can still help empower fans to escape their own self-imposed tombs and accept themselves for who they truly are.