Public protests have been an integral part of radial and progressive political movements in American history, but now more than ever, they are being honed to enforcedirect action for causes needing rallying around. A new documentary, The Power of Protest, seeks to examine how several modern movements, from Gays Against Guns to the Women’s March to Black Lives Matter to Standing Rock, are helping to make America a more successful democracy.

From writer/director Micah Fink, and produced in part by the Independent Production Fund, The Power of Protest seeks to illustrate how different kinds of movements and their individual strategies have found ways to triumph. The film is currently raising finishing funds in a Kickstarter campaign, hoping to prove that there’s a supportive audience wanting to learn from current grassroots organizations and movements like Gays Against Guns.

“Gays Against Guns believes acts of civil disobedience is more effective at raising awareness,” says producer Josh Grossberg. “And the fact that they’re passionately willing to put their whole bodies into such protestssuch as staging peaceable die-ins that result in arrest as they did last year at the Hart Senate Office Buildinghelps the public understand that there is a pressing problem that has to be addressed.”

The Power of Protest will differentiate between methods each movement takes, highlighting missteps or missed opportunities alongside major wins. But it doesn’t forget about the earlier movements that have tried and failed or tried and won that have inspired movements of today.

“The Women’s March uses mass mobilization in the form of marches, online editorials, and more women entering the electoral process among other acts of protest to foment change,” Grossberg says. “Gays Against Guns, on the other hand, recognizes that such approaches have failed repeatedly in the past.” He notes that the continual offers of “thoughts and prayers” from inactive congress members have failed citizens who fall prey to frequent mass shoots, which inspired GAG’s methods of civil disobedience, which Grossberg says are directly inspired by the traditions of ACT UP.

“And in each case,” Grossberg says, “their differing strategies are working with varying degrees of success.”

The filmmakers chose to focus on modern grassroots movements in order to highlight the “absolutely necessary given the crisis the Trump administration has created for our democracy with the president’s routine destruction of democratic norms, including freedom of speech and the press, and authoritarian leanings,” Grossberg says. “And the mass movements we’re seeing among progressives is the response.”

“These protest groups have mobilized to protect the rights of the LGBTQ community and other minorities, including African-Americans and immigrants, who have routinely come under assault by the policies of the most right-leaning administration in memory,” he continues. “And while the left has lost ground under the Trump administration, these people-powered socials movements have managed in many instances to check parts of his right wing agenda.” 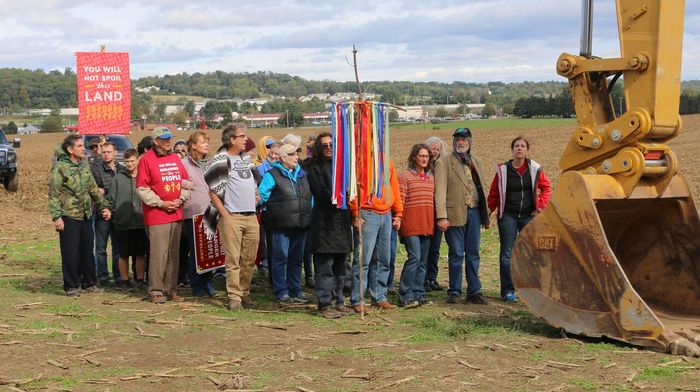 The Power of Protest has some star power with advisors and participants such as actor Danny Glover, filmmaker Rory Kennedy, journalist Ray Suarez, and DOMA-defeating lawyer Roberta Kaplan. Through the Kickstarter campaign, the producers hope to explore the true connection between how social movements and acts of resistance shape America’s past and are essential to its future.

“There were the rallies that saved the ACA. And the public outcry against Trump’s transgender military ban that led the courts to quash it and the Pentagon to accept transgender recruits,” Grossberg says. “The issues the Women’s March brought to the fore has continued with #MeToo, whose activists have focused on ending sexual harassment, ensuring a safe environment and addressing equal pay in the workplace. In the case of the latter, Gays Against Guns was formed as a reaction to the mass shooting at Orlando’s Pulse nightclub, that killed 49 members of the LGBTQ community. Inspired by the successful activism taken a generation ago by ACT UP to combat the AIDS pandemic, Gays Against Guns has utilized direct action to change Americans’ attitudes towards the epidemic of gun violence plaguing the nation.”

“As filmmakers,” he says, “it’s our job to capture this history as it’s unfolding and bring to light some of the most important stories of this tumultuous era.”

Check out this exclusive footage from The Power of Protest below.