John Peery self-identifies as a few things: he’s a straight white male, an actor who goes by the stage name “John Pizza” and, perhaps most importantly, a RuPaul’s Drag Race super fan. He and his girlfriend, Candace Thompson, watch the show at viewing parties hosted by Syndicated, their local watering hole in Brooklyn, each week.

“Porkchop is a hometown hero,” he told me at the bar, recalling one of the most famous drag queens from the show’s first season, who hails from Peery’s hometown of Raleigh, North Carolina. “If they were playing the hockey game when we walked in at 7:30, I can guarantee you we wouldn’t still be standing here right now.”

In its tenth season, the reality TV show in which drag queens compete to win $100,000 appears to be going mainstream. After moving from the Logo network to VH1 last year, when it broke viewership records and quickly became the highest-rated original program in its competitive time slot, the show has grown from having a cult-like following into a full-blown pop culture phenomenon, with viewers from all walks of life becoming invested in the queens and their personal journeys.

“Even if some people aren’t here to watch the show, they’re still catching and picking up things about a world they once knew nothing about,” Thompson, who identifies as queer, added. “The language, the cultureit’s making important progress.”

Syndicated is just one of countless venues across New York City and the rest of the country that’s beginning to take notice of Drag Race. Gay bars, however, have been hosting weekly viewing parties for years, where guests drink RuPaul-themed cocktails and watch the drama unfold on projector screens, often followed by raucous, live drag shows.

Now, bars and clubs that don’t cater exclusively to the LGBT community have started organizing similar weekly events, inviting straight fans to watch the competition side-by-side with the folks whose art form is responsible for the show’s commercial success. 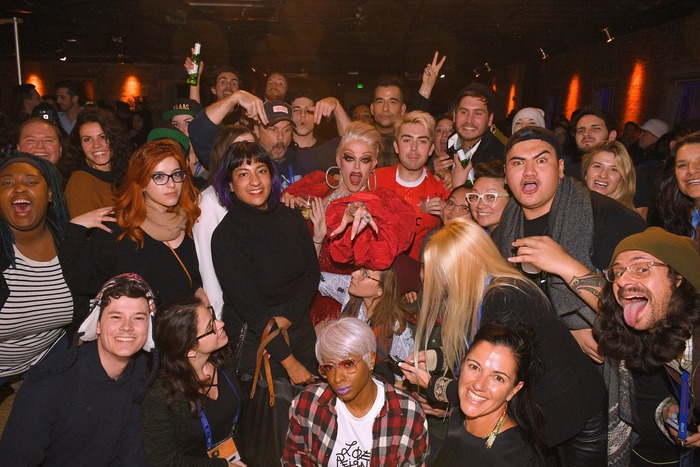 Drag Race viewing parties at non-LGBTQ venues provide an educational opportunity for mainstream society to learn more about queer culture, according to Ariel Italic, a drag queen and member of the nightlife entertainment trio, The Nobodies. Each week, Ariel spends three hours applying makeup and preparing for her hosting gig at Brooklyn Bazaar, where she said a “decidedly mixed crowd” seeks out an immersive experience while watching the show.

“I think for a straight audience who is trying to figure the show out, having queer fans around can be a good way to get insight into how to interpret what’s happening on the screen,” Ariel told me. “Like, rather than having to ask questions, you can watch where everyone else is laughing or booing or cheering, and you can hear what sort of slang from the show they use in casual conversation and what doesn’t make it from the show into the real world. It gives context.”

Fans pour into the Brooklyn Bazaar’s vintage grand ballroom just before Drag Race begins at 8:00 p.m., finding their place among a sea of blue and green lawn chairs under fringed chandeliers, with glasses of red wine and draft beer in hand.

Ariel and The Nobodies remain busy throughout the entire night, conducting a game of bingo that correlates with the ongoing episode, cracking jokes and performing lip syncs during the commercial breaks. Straight couples and groups of straight friends often wander into the parties “to see what all the fuss is about,” Ariel said.

“Drag is a way to push people to look at the walls they’ve put up around different parts of gender or sexuality or beauty or whatever else,” she continued. “I hope that as more people get used to drag as a light-hearted, comedic medium full of sparkles and death drops, it can pave a way to the appreciation of the more intellectual and political aspects of drag. There’s a lot of smarts behind the spectacle.”

Mainstream pop culture isn’t the only thing to potentially benefit from the show’s continued prominence. Jee Song, director of events at the Museum of Sex in Manhattan, says ticket sales have been “steadily climbing” since the venue first decided to begin hosting viewing parties last year, describing the success of the weekly event as a “pleasant surprise.”

The Museum of Sex offers a Drag Race viewing experience in a club-like atmosphere. A DJ plays top 40 music during commercials as drag queens, fans and party-goers socialize over RuPaul-themed Smirnoff cocktails. When the show returns from a commercial break, everyone temporarily shuts the party down and immediately turns their attention to RuPaul.

Like most other viewing parties, the setting isn’t the typical cliche one thinks of when hearing the term “safe space,” since there isn’t much political correctness about Drag Race or the comedy employed by many queens in each episode. Still, the environment is one which allows for wide-ranging conversations to take place, and for straight people to ask questions to LGBT viewers about queer culture so long as those questions “come from a place of genuine interest,” as Ariel Italic stressed.

“We wanted to create a community where there is no judgement,” Song said about the museum’s decision to host Drag Race viewing parties. “It’s like magic: everyone enjoys it … It seems to be this key to opening up a lot of different doors, and having it all come together in a melting-pot kind of way.”

“Drag Race taps into the psyche that life can be fun, it can be joyous, and it can be celebrated, no matter who you are,” she added.