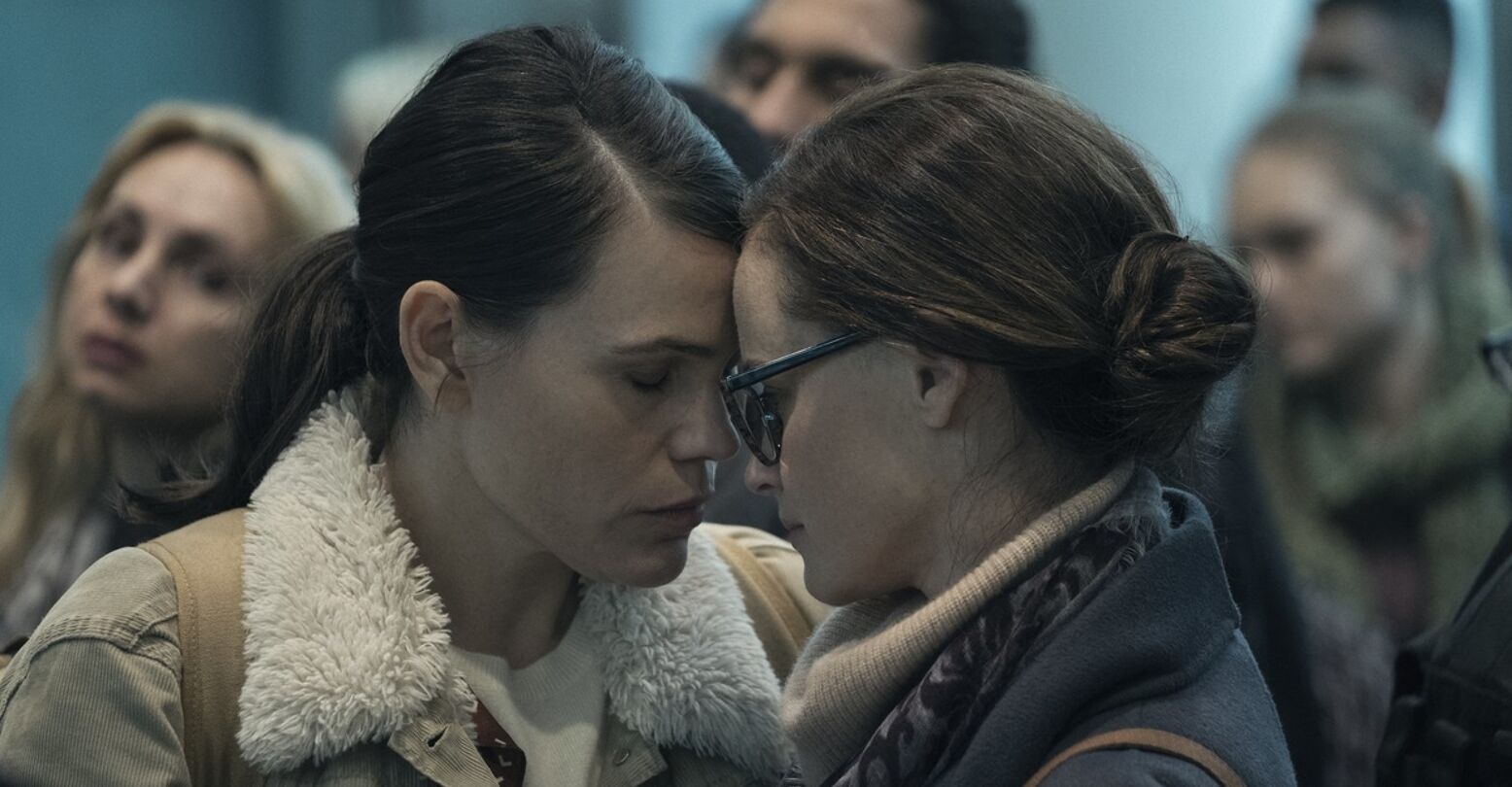 Despite critical acclaim, Emmys, and Golden Globes, some viewers have been finding The Handmaid’s Tale a hard watch. Set in the not-so-distant future where far-right religious superiority overthrows the government and controls, among other things, women and their bodies, the Hulu series is unapologetically violent, sparing no one in its physical and emotional torture. But these elements are all part of the story–a proverbial warning wrapped in fiction that illustrates just how easily America can slip into the hands of conservative, power-hungry overlords who care little about its constituents, and only about controlling the population.

What makes The Handmaid’s Tale particularly poignant for LGBTQ viewers is its inclusion of two major lesbian characters whose own story arcs are interwoven with that of June (Elisabeth Moss in the lead narrating role). As Moira, Samira Wiley plays June’s pre-Gilead (aka the new sovereign nation) best friend; a feminist activist and fighter whose loyalty continues after she escapes prostitution and makes it to Canada, where she’s now trying to recover from her experiences but having severe, unending PTSD. Alexis Bledel is Emily, a formerly married lesbian mother whose fertility keeps her alive despite her attempts to flee a “gender traitor” relationship with another woman, who was hanged in Season 1. Emily’s punishment: To watchand then to lose her clitoris. In Season 2, she’s in the colonies, where the women allowed to live are forced into manual labor and extreme poverty. She’s even more hopeless when she recalls painful memories of having to say goodbye to her wife (Clea DuVall) and child when they were separated at the airport when the colonization became a nightmarish reality. 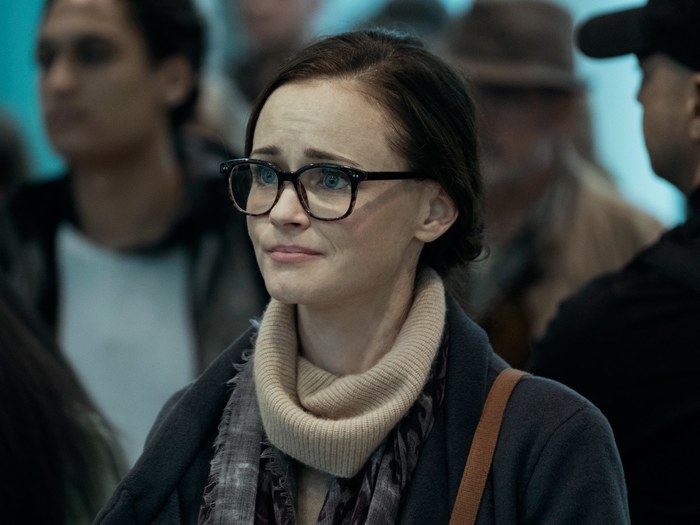 It’s a rarity to have even one major lesbian character on any given television show, but to have two, and two whose stories have yet to intersect as they aren’t lovers or even friends or acquaintances, is not only an anomaly, but surely one of the only times this has happened on a series outside of The L Word (and that was only because of the impressive number of queer women allowed to exist on one show). Moira’s sexuality has little to do with her character’s trajectory on the show, while Emily’s informs much of her story. Creator Bruce Miller and the writers of The Handmaid’s Tale are somehow able to utilize their individual identities as facets of who they are, but not the whole. Even in Emily’s case, where her sexuality has dictated much of how she is treated and punished in Gilead, that treatment and punishment is not seen as earned or deservedbut rather, another method of monstrous control on behalf of the people in power.

So while The Handmaid’s Tale might be consistently devastating its queer characters, the show is also giving them more care and thought than most other shows. Part of that is because of the queer woman writer in the roomNina Fiore.

Fiore has been with the show since the beginning. She was hired by Miller, who also gave Fiore and her writing partner jobs on his two previous shows (Alphas and Eureka).

“I guess you can say [I’m] the unofficial [lesbian] expert, yes,” Fiore laughs. “I mean, I think at the end of the day, you’re trying to tell organic and telling stories about people and I think that’s what makes our gay characters on our show so rich and incredible. Yes, they’re gay, but that to us is like your hair color. But of course on our show because of the ‘gender traitor’ of it all, it certainly definitely has a particular weight to it, and adds a different level of what it means to be a handmaid than maybe for some of our straight allies on the show.”

As former handmaids, both Moira and Emily were subjected to repeated rapes from the men they were beholden to while their infertile wives watched, hoping it would result in a pregnancy. (They would, in turn, become the de facto mothers.) But now, their Season 2 existences are different kinds of hell, as they are still living in a world that allowed Gilead to happen. 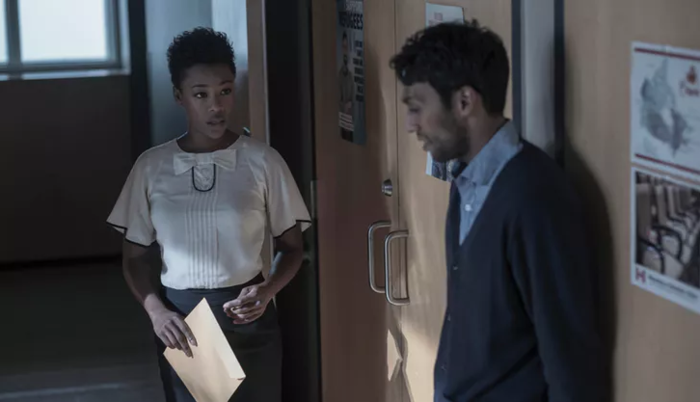 Fiore says she’s heard or seen complaints from critics who find the show a little too real in the Trumpian times we live in, and she understands.

Not that the job is an easy one for Fiore, either. The scenes that are hard to watch are excruciating to write, too.

“I mean it’s intense,” she says. “The research is difficult to read or research. It’s hard, but I feel like it’s necessary you know? I’ll never forget when Bruce pitched the clitorectomy for Alexis Bledel’s character in Season 1 and the whole room went silent.”

But as soon as he brought the idea to the writers, Fiore says that in a time where conversion therapy is still legal in most of the United States, they knew they had to go there.

“It was exactly what should happen to that character given the nature of Gilead and how Gilead viewed sexuality and sex in general,” she says. “To them, it was corrective and people do hold that very intense thought to be true. It’s nuts. You’re like really, that’s corrective? And so, yeah I mean it’s not an easy task but I think it’s one that we need to do and we try to do it as best as we can, as compelling and organic a character as we can.

“We don’t put anything in the show that doesn’t happen or hadn’t happened in history of isn’t currently happening,” she says. “And the fact that clitorectomies happen as corrective punishment is just insane and it happens to straight people as well but with her character in particular, I mean, it’s just devastating. And then you have to think about what’s more devastating: watching your lover get hung or the clitorectomy.” 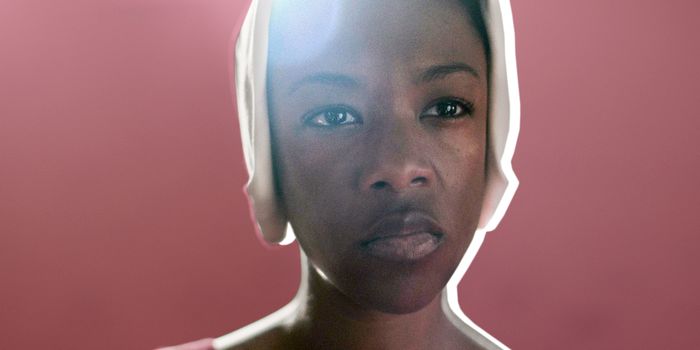 The Handmaid’s Tale challenges viewers to identify with several kinds of characters, and that includes a queer Black woman and a lesbian mother. It is offering those who might not find commonalities with them in the real world to feel for them on screen. And queer viewers will see themselves reflected in more than one character on a show that imagines a future that includes them, unlike other fantasy and dystopian series that often ignore them or relegate LGBTQ characters to small bit roles, often killing them off before they are fully realized.

There’s also a very strong “chosen family” element to The Handmaid’s Tale that queer people can relate to. June, Moira, Emily, and the other women kept under the thumb of commanders and higher-ups share information, make escape plans, and help keep each other alive when hope isn’t just lost, but demolished for the foreseeable future. Their relationships go beyond friendship, but are not sexual or romantic. They are, instead, familialit’s a sisterhood.

“My friends and Iwe always talk about our chosen family, our chosen tribe and how much we love that and how grateful we are that we have those opportunities as adults to create those,” Fiore says. “And so yeah, that’s definitely something that is talked about, and I love Moira and June’s relationship. I love that they push each other to keep fighting, particularly in the first season.”

Even though they’re not all having sex with each other, these women are having sex for pleasure with others (when they are able), which is worth noting because oftentimes lesbian characters relegated to best friend status are desexualized, sanitized for a “universal” (read: heteronormative) audience. The Handmaid’s Tale is successful at queer storytelling because it gives its lesbian characters the same care and nuance it offers its straight ones. This is due largely in part to Fiore and Miller’s writing room, which isn’t afraid that including central lesbian characters will dissuade straight viewersinstead, viewers of all kinds have found a way in to a show that some might even find unwatchable in its reality.

“I feel very fortunate as a gay woman that I get to be a part of that kind of storytelling as well as part of the conversation about these characters on the show and off the show,” Fiore says. “I love that the gay characters on our show are both dynamic. They are not one-sided. They are not put there for comedic relief. They are full-fledged characters.”

Season 2 of “The Handmaid’s Tale” is now streaming on Hulu.