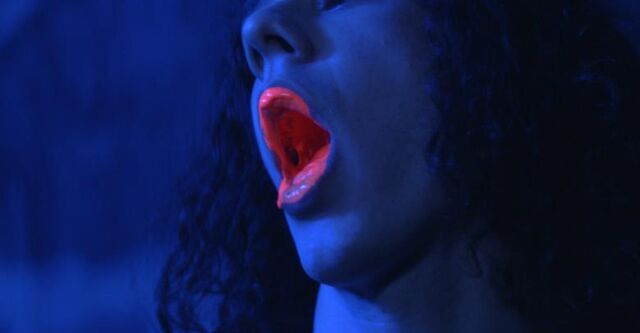 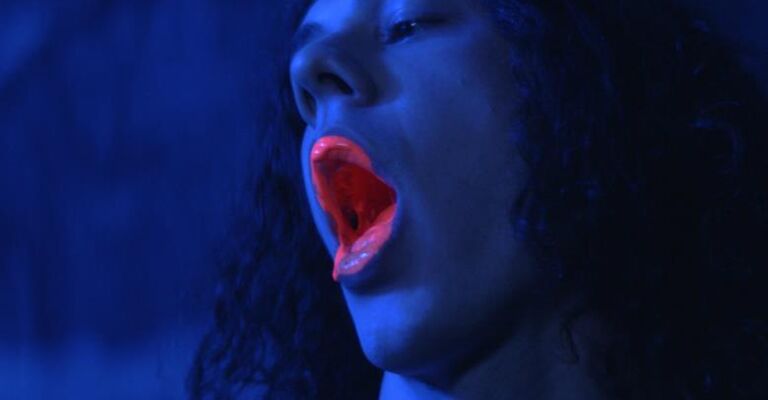 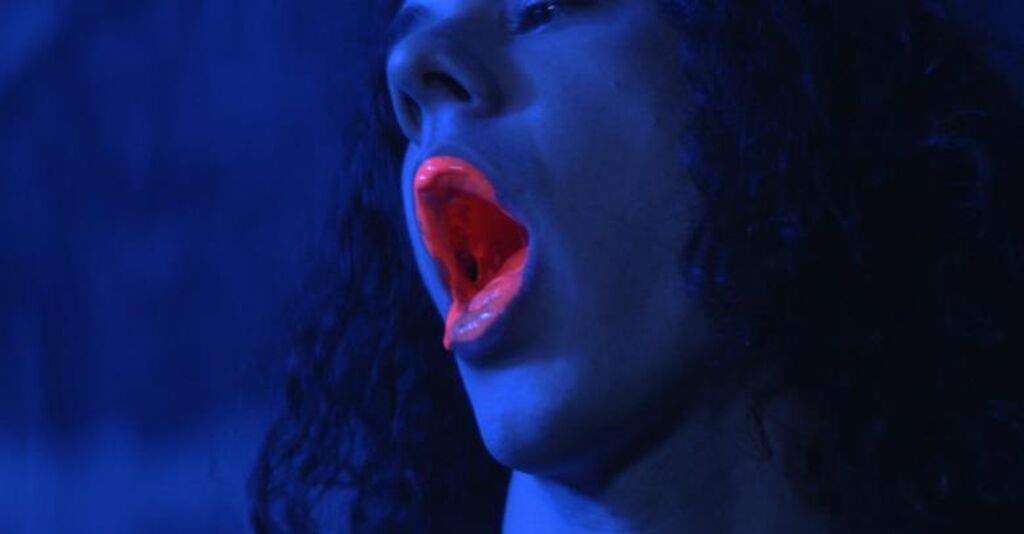 Hard Paint (Tinta Bruta) opens with a grainy shot of Pedro (Shico Menegat) sleeping naked in front of his webcam while unseen observers watch from afar, relentlessly commenting on what they can see from the anonymous safety of their online chat room. While Pedro conceals his identity from a fanbase who only know him as Neon Boy, directors Marcio Reolon and Filipe Matzembacher thrust us headfirst into the private world of Pedro whose insecurities are masked by the neon glare of webcam stripping.

The protagonists of Beach Rats and Love, Simon both found release of sorts online, but here in front of his webcam, Pedro truly comes alive, performing private sex shows for his clientele that add a splash of color to their otherwise dreary existence. Drenched in fluorescent paint that mesmerizes under neon lights, our androgynous lead is an ethereal presence whose lithe movements pulsate in time with the music. In these moments, Pedro transcends the pain of his past and isolation, but this online escape is soon threatened by the popularity of a rival performer called Boy25 who steals his trademark aesthetic for himself.

Given the subject matter, you’d be forgiven for assuming that Hard Paint takes a hard look at the grimy underbelly of online stripping. While an air of judgement does seem to follow Pedro around on the unforgiving streets of Porto Alegre, the film itself is far more forgiving, depicting the vulnerable teenager with hedonistic glee during each of his performances. Once the lights are turned back on though, Reolon and Matzembacher’s second feature together transforms into a perceptive study of alienation that builds on the themes of Beira-Mar with more cohesion and empathy.

Set in the co-director’s Brazilian hometown, Hard Paint evokes the structure of Moonlight with a similar three-part breakdown, but here the focus extends outwards beyond our lead to other people in his life who help him to navigate this hostile environment. First up is Pedro’s sister, Luiza (Guega Peixoto), who accompanies our protagonist to a mysterious court hearing before leaving to start a new job halfway across the country. Her departure initially throws Pedro’s life into disarray, leaving him more isolated than ever before, but a chance encounter with a rival called Leo soon opens him up to new possibilities in the film’s second act.

Together, Pedro and Leo (Bruno Fernandes) decide to combine their shows online and it’s not long before their sexual chemistry moves beyond the webcam and into real life. At this point, Hard Paint could have easily descended into the kind of sentiment typically seen in queer coming of age stories. Fortunately, the script avoids these tropes in favor of authenticity, grounding their burgeoning relationship with stunning work from both leads.

After rehearsing for several months together, the intensity of Menegat’s performance connects with an electric turn from Fernandes to create something far removed from the cautious glances and wary contact that characterizes films like Call Me By Your Name. As Pedro and Leo both seek to dominate each other first before losing themselves in something deeper, it’s easy to forget that the pair are performing for two audiences and not just for those who are paying for it through the vantage point of their own private webcams.

To downplay the eroticism of Hard Paint would do the film a disservice. Compelling, explicit imagery hits the senses all at once during each of Pedro’s hypnotic centerpiece performances, yet Hard Paint is careful to avoid portraying the sex industry in a purely positive light. Real life cammers sometimes fall prey to criminal influences, but this kind of work can empower people, too, helping humanize an industry often seen in wholly negative terms.

While Reolon and Matzembacher never openly judge the actions of their characters, the consequences of living almost exclusively online begin to take their toll on Pedro by the time that the third act is reached. Named after Neon Boy himself, this final chapter provides the film’s most incisive social commentary, exploring the often painful duality of Pedro’s life in both the material and virtual world.

Music is smeared throughout each sex show with blissful abandon, but later scenes set in the real world begin to incorporate jagged strings that remain as unpredictable as the script itself. In these darker moments of conflict, past surges of violence are reignited within our young protagonist that threaten to break him entirely, yet his response to this is far more resilient than audiences might first give him credit for.

The rhythm of Pedro’s character arc mirrors the evolution of his online show. Hesitant and self-conscious at first, Neon Boy begins to take pride in his body as he gradually builds connections in the real world, swaying back and forth between these two realities until he finally combines them both in a euphoric explosion of color and ecstasy. Rather than shun his neon alter ego, Pedro embraces his fantasy world in a vibrant awakening that culminates in the best use of music that you’ll see in cinemas all year.

Judge camming all you want, but there’s nothing more beautiful than taking ownership of your sexuality with such a freeing sense of triumph and dignity.

Hard Paint premiered at Berlinale in February, where it won the Teddy Award for Best Feature Film. Itplays at BFI Flare March 30 and 31.