You got a fast car
I want a ticket to anywhere
Maybe we make a deal
Maybe together we can get somewhere
Anyplace is better
Starting from zero got nothing to lose
Maybe we’ll make something
Me, myself I got nothing to prove

The song was the lead single from her eponymous debut album, but it wasn’t until June that it became a radio hit after Chapman performed it live during Nelson Mandela’s 70th Birthday Tribute at Wembley Stadium in London. The then-24-year-old famously performed twice that night, after Stevie Wonder walked out, giving the young artist some much needed visibility. Her album sold 1,750,000 more copies in two weeks. “Fast Car” reached #6 on the Billboard charts and received two Grammy nods (Record of the Year and Song of the Year).

“Fast Car” was praised for its working class theme; its folk-pop POV from a Black woman artist who defied tired genre tropes; its timeless transcendence. Somehow it also became a lesbian anthem; one of those campfire singalongs that begs for a join-in on the chorus and a natural choice for a road trip playlist. 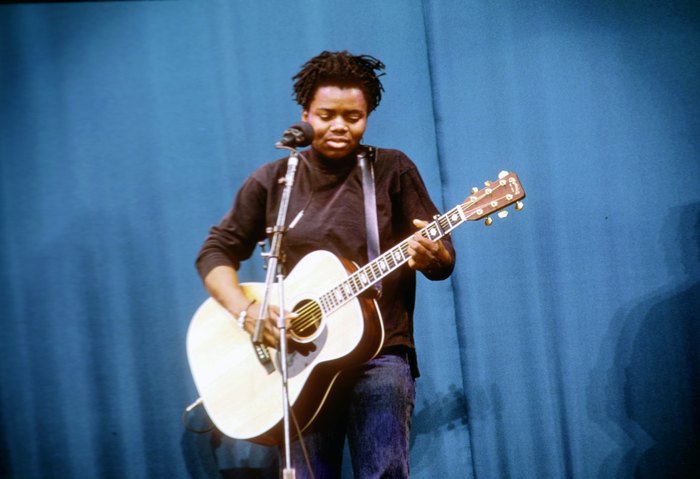 Tracy Chapman has never went on record about being a lesbian, or bi, or queer, but her lovers have outed her (Alice Walker, among the most well-known), as have well-meaning LGBTQ organizations who celebrate her under the assumption she’s both out and proud. But Chapman’s stories are relegated to her songwriting; she rarely speaks to the press and when she does, she’s noticeably reticent to speak about anything personal.

So how did “Fast Car” become such a huge facet of lesbian culture?

For one, it was the theme. The way Chapman sings about a genderless couple leaving town to find a home in a city nearby is something all queer people can relate to. We’ve always felt the need to relocate if we wanted to find other gay people―San Francisco, New York, Chicago. The nearest metropolis was deemed safer somehow, or at least provided more options for solidarity and community than, perhaps, Cleveland, Ohio where Chapman was raised.

Yet that feeling of wanting to leave an undesirable situation isn’t necessarily lesbian-specific.

“I had so many people come up to me and say that they felt it was their song,” Chapman told the BBC in 2010, “and someone told me at one point that they thought I’ve been reading their mail, they were saying ‘You seem to know my story,’ and people would come up and tell me about a car relationship and some detail that they felt was in the song that represented something that happened in their lives.”

Chapman said she was inspired in part by coming from a blue collar background: “Raised by single mom, I was just watching people, being in a community of people who were struggling. So everyone was really just 1. Working hard 2. hoping that things would get better.”

“I never had a ‘fast car,'” she said. “It’s just a story about a couple, how they are trying to make a life together and they face challenges.”

Still, to so many lesbians in the late ’80s and throughout the ’90s, “Fast Car” was full of Sapphic symbolism. Perhaps it was the lack of pronouns used for her lover coupled with her genderqueer swag, the way she accepted her Grammy for Best Pop Vocal Performance Female wearing a black leather jacket, an androgynous swagger, and a smile.

Is Tracy Chapman’s Fast Car about two lesbians who loved to the city? Or just one lesbian and her like, good guy friend?

Chapman was also a product of her time, coming into popularity at the same time as The Indigo Girls, Melissa Etheridge, k.d. lang, and Michelle Shocked. (It’s worth noting that lang wouldn’t come out until 1992, Etheridge in 1993, and Shocked would eventually reneg on her homosexuality altogether.) Chapman played Lilith Fair, preferred pants, and presented as an androgynous and soulful human with songs about real shit.

And because we read her as queer, lesbians felt a kind of ownership over “Fast Car,” a song that is well-loved by people of many identities and has been covered by several artists since. Most lists of “Best Lesbian Songs” include “Fast Car” (Time Out even put it at number one) just like they include Etheridge’s thinly veiled early hits that were clearly about other women but also neglected to make it explicit.

But back in 1988, queerness was still shrouded in subtext, and so even if Chapman didn’t intend for “Fast Car” to be the story of two young women hitting the road and trying to find a better existence somewhere outside of the place they met, it was adopted as a hopeful anthem for the oftentimes hopeless; for the lovers who feel like getting out of small town America is their only shot. And that mainly had to do not just with the imagery, but Chapman’s masc-of-center vibe and vocals, a delivery that was was and always has been different from most pop or soul artists. Chapman was more Gladys Bentley than Chaka Khan; more Bessie Smith than Kate Bush. She’s an icon to many communities who feel ownership over her music, which is how Chapman has always wanted it.

“Fast Car” is unofficially official in the way that so much of lesbian culture has been; unvalidated until some fateful day when just maybe someone like Tracy Chapman will say “This one was at least a little bit for you.”

But even if that day doesn’t come, we can still adopt it for our very own. We already have.