The world is on fire!

You don’t need me to list the reasons why. I’m sure you feel it in your bones, in the dread of getting up to go to your day job to make rent while the president sends you weird text messages. People’s current way to deal with our existential dread is cracking nihilistic jokes in an attempt to hold our garbage world (and ourselves) at arm’s length. Something making you feel horrible? Mock it with memes and tweets.

Ultimately this betrays our deeper fears while seemingly just being about fun and entertainment, which brings me to the Brooklyn band Human People.

When I call up the Brooklyn-based band’s songwriters Hayley Livingston and Marisa Gershenhorn, they sound totally at ease, even though they’re cracking jokes about the NSA listening into our calls. 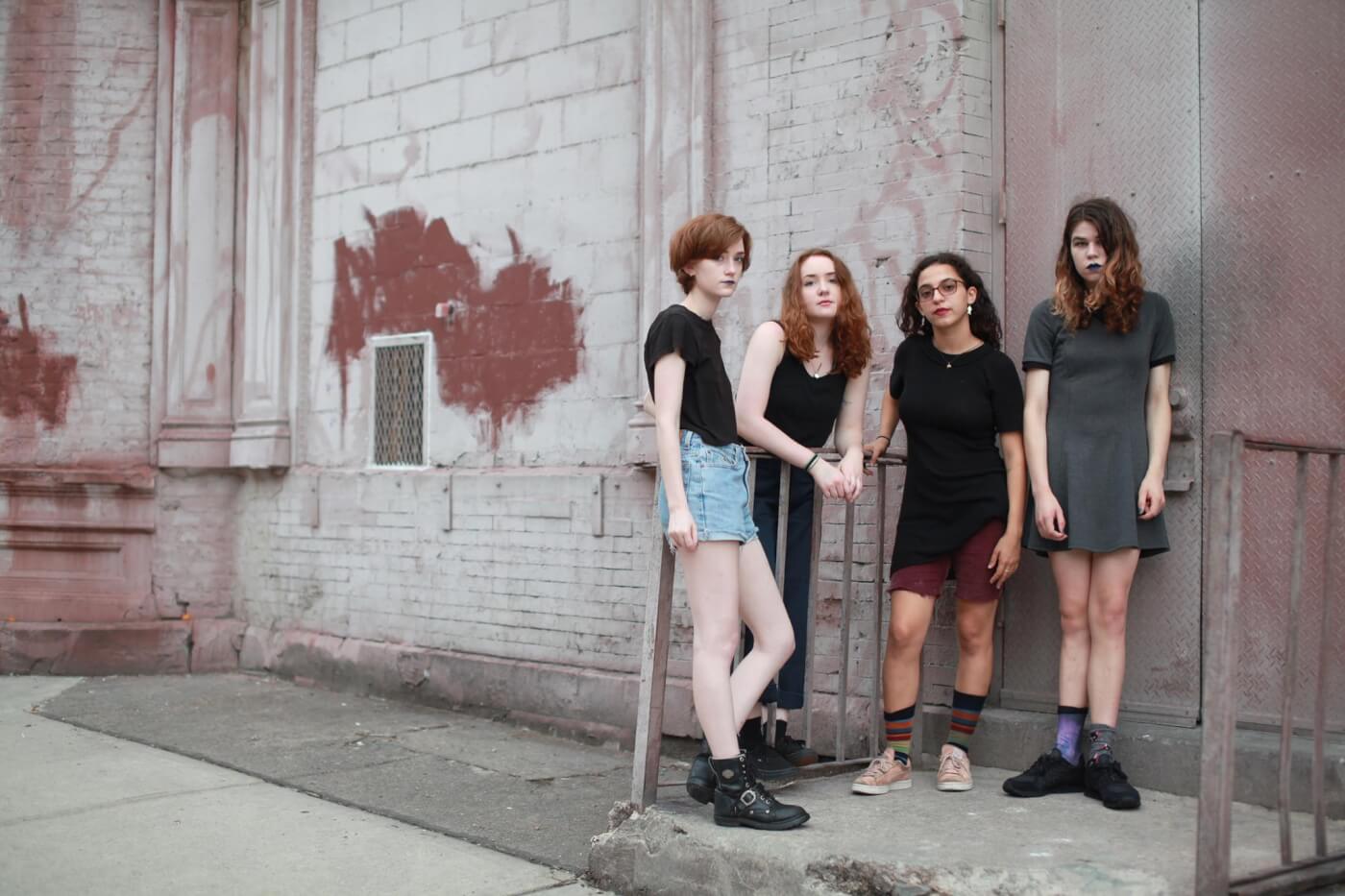 It’s easy to imagine hanging out and sharing a joint with the pair. We’ve met before at various shows (I’ve even booked their band a couple of times), and I interviewed Livingston to get her perspective as a trans woman on the relationship between Kim Petras and Dr. Luke. Still, I get the sense that it’s not hard to reach this level of dialogue with them. Making fun is something of a habit for Human People.

The band’s debut album Butterflies Drink Turtle Tears is filled with anthemic songs about feeling like a total loser. At first listen, it’s just an uptempo collection of raggedy punk songs. The band isn’t concerned with polish: everything sounds like it’s constantly on the verge of collapse. Livingston does most of the singing, and her voice cracks as she describes the malaise overcoming her. This isn’t a confessional indie punk album a la Mitski: Human People are too busy joking around.

There’s humor and irony in songs like “California,” which Livingston wrote about her hometown of Orinda. — “It’s like a beautiful green place, but it was like ‘Wow, I hate everything. I wanna leave,” she says of the track, which has a chorus of: “I’m gonna go to Cali-fucking-fornia / It’s where I will die/ If you’re gonna go just know that I warned ya / hope you might stop by.”

On “Run me over!” Livingston drones the titular request over a snappy snare drum that sounds like it’s from a ‘60s girl group record. On “Black Flowers,” the band pairs the phrase “I ruin everything that is in my way, so don’t be in my way!” with an upbeat pop chord progression. It’s a trick they share with fellow DIY punk group Peach Kelli Pop or early Lily Allen: mixing spiky song topics with sunny sounds.

On “Jenny,” Gershenhorn sings “I’m full of blood and bile” almost blithely, undercutting the gross imagery of her lyrics.

“Whenever you’re having angst there’s always a second layer of feeling silly about it,” Gershenhorn says. Human People know they sound melodramatic, but they are also rolling their eyes. This double layer is something of a millennial trend (the popular Twitter account So Sad Today comes to mind, as do memes about eating Tide Pods). 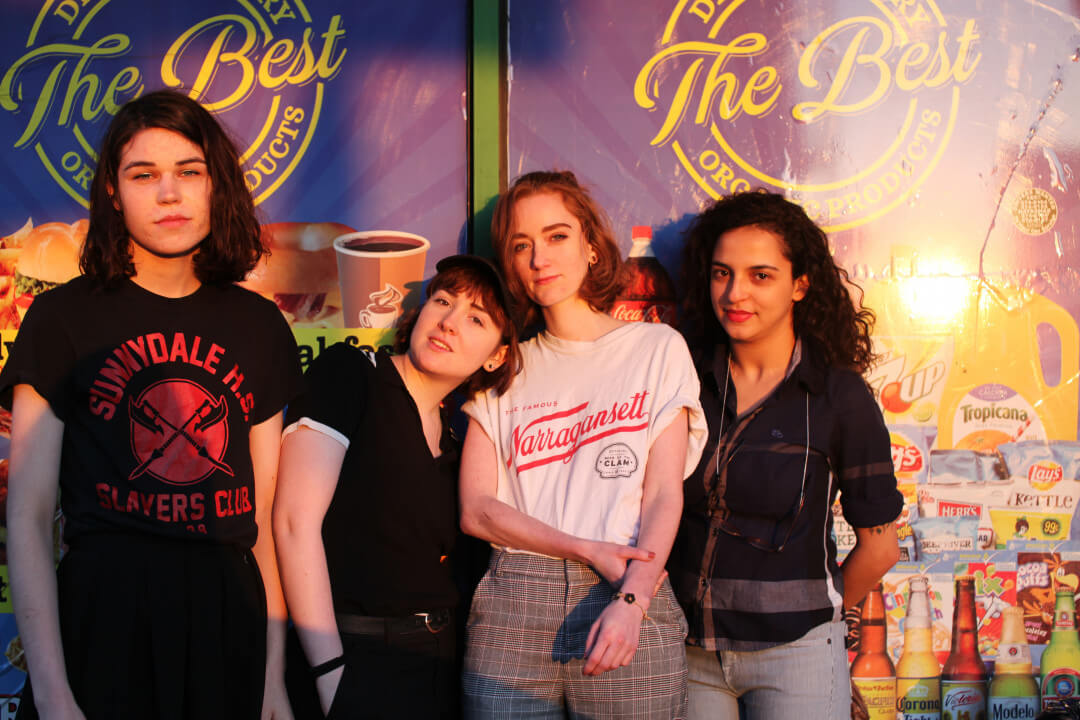 These jokes aren’t actually jokes: more like inner thoughts you text with a “lol” at the end so your friend doesn’t get too worried about your morose ideas. Human People’s music has always done this. Past songs  “Cancer” and “I Don’t Wanna Go Outside” have a jokey bounce, even as Livingston sings: “every single night I think about getting murdered / a straight white man shooting me up at 2 am in the bathroom / he wants my fucking head mounted on his wall.”

This kind of sarcastic humor had a big moment in the 1990s, back when being a slacker was en vogue and no one wanted to look like they’re trying too hard, and Human People’s sound recalls The Muffs from that same era. Early on, Human People found a home on a label whose taste skewed similarly backward: Butterflies Drink Turtle Tears came out on Exploding For Sound Records, a hallmark of northeastern DIY punk with a tendency to look toward the ‘90s for inspiration.

Human People are very much born and of the DIY punk scene. Livingston, drummer Vicky Gilleum, and the band’s bassist Abi Austin all shared the same dorm the first month of freshman year at NYU; Gershenhorn joined the gang after meeting Gilleum at the Brooklyn DIY venue Palisades, where Livingston worked. The group went to countless shows together. By the time the second semester started the foursome started practicing their own music, eventually playing shows with bands like Washer, Pile, and Remember Sports, all bands who frequented Palisades and similar spaces such as Silent Barn or Shea Stadium.

Over the last two years, pressure from local authorities along with skyrocketing rent have forced all these places to close. Human People remain optimistic about the future of the Brooklyn DIY scene. The band currently claims The Glove, one of the last DIY art and music spaces in Brooklyn, as their home venue. The secret space in Brooklyn is known for having an anything-goes attitude. It’s where the band had their record release show Sept 21st.

Nothing could be more fitting for Human People’s identity as musicians and as people. Human People hasn’t fallen into that trap of being tokenized, despite Livingston being open about her trans identity. “My identity is part of the music I write to a big degree, but I don’t want to use my queerness to get people to check out our band,” she says. “That feels a little cheap to me.”

She mentions that if Human People’s songs had more explicit themes of liberation, maybe she would approach it differently; she says she admires more visible people like Against Me’s Laura Jane Grace.

“I kinda wish I was more down to be transparent,” she stops to laughs at the irony — “Trans!” — then continues, “but that’s not really who I am.”

Making a strident political point wouldn’t be Livingston’s, or Human People’s, style. All you really need to like Human People is an appreciation of a barbed punk song that winks at the throbbing heart underneath.