Perhaps the most important moment in the Queer Eye reboot involves their 57-year-old straight makeover subject, Tom, a mattress, hair guru Jonathan Van Ness’s legs in the air, and design expert Bobby Berk’s hands on his ankles. Now, as hot as that might sound, the moment is not sexy at all.

Here’s the context: Bobby and Jonathan have gone with Tom to the mattress store because he has a bad back, and they’re trying to find memory foam so he can catch some zzzs and entertain a “lady friend” or two. When all three plop onto a vibrating mattress, Jonathan jokes that he can imagine a midwife delivering his baby in the bed. As Jonathan lifts his black-pantsed legs into the air, Bobby grabs him by the ankles and the two feign, through shrieks and yelps, to give birth to a feather down pillow baby. Jonathan straddles the pillow in his arms and says, “She is gorgeous.”

Tom, the literal straight man sitting next to this moment of queer roleplaying exuberance, says through laughs, “You guys are crazy.”

In eight one-hour stints, Queer Eye attempts to offer a lot of different to messages to several different audiences. For those in red-state America, it deepens depictions of queer life. For those in blue-states, it serves as a reminder of the humanity of those who wear MAGA hats and have never seen RuPaul’s Drag Race. With so much character ground to cover and so many emotions to elicit, the Queer Eye premiere episode pivots quickly, and effectively, from tear-inducing moments to gut-busting levity.

Which brings us back to the midwifery roleplaying. While the show has so many capital-M Messages to give its audience, one of the show’s tinier, profound phenomena is the amount of queer affectioncaressing, laughing, and playingit offers the viewer.

There’s a number of reasons that this series’ Fab Five are more touchy-feely than the original cast. Perhaps it was because 2003 was a different time, but the original Fab Five always felt more like expert acquaintances who just happened to find themselves, Justice League-style, in the same franchise. But this updated Fab Five is the Avengers: they have an emotional core and complicated, friendly dynamics that resonate deeply with the viewer.

That is no shade to the first Fab Five. The original series run on Bravo was more about setting up a mini microcosm and focused heavily on each episode’s soon-to-be metrosexual glow-up guy. But Netflix’s Queer Eye is simultaneously invested in the idea of queer platonic (as far as we know *wink wink*) friendship. In the original series, gay men were Glamazons from another planet sent to zhuzh straight men into a better version of themselves. Netflix’s Queer Eye allows their five queers to be fully human and take joy in laughing and touching each other, the way only queer people can.

In 1981, American artist Barbara Kruger made her work, “Untitled (You Construct Intricate Rituals),” an indictment of what we would all recognize now as toxic masculinity. 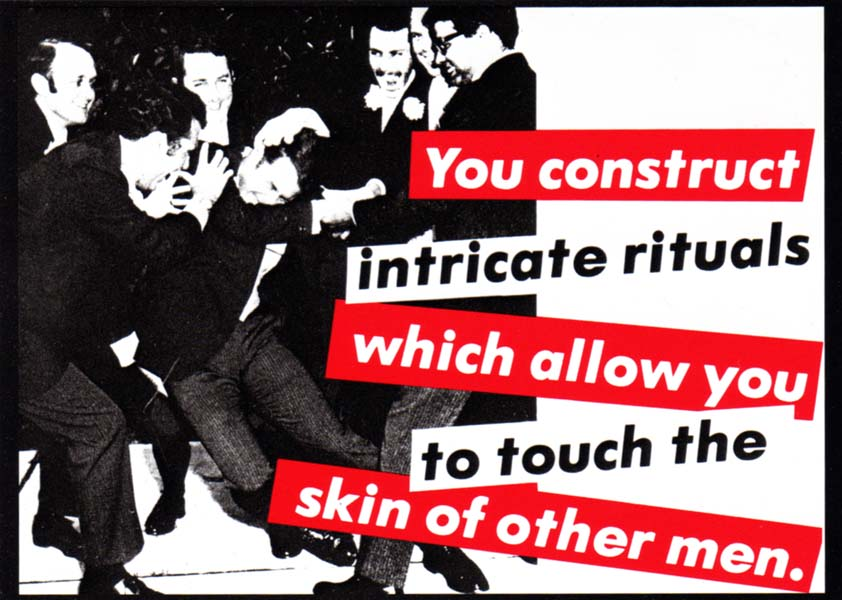 The photo has the words, “You construct intricate rituals which allow you to touch the skin of other men” emblazoned on top of a group of men wrasslin’. Kruger’s subject could be a whole host of things: organized sports come to mind, of course. But, most importantly, it’s a comment on the ways heterosexual men have to ritualize their physical interactions in order for them to be socially allowed.

Queer Eye, on the other hand, shows how effortless and good it feels to touch and be touched by your queer friends. In episode 3, Queer Eye’s culture guru Karamo greets the straight subject, a police officer and MAGA hat owner, with three swift, hard slaps on his hand. When fashion expert Tan France walks in, he and Karamo both outstretch their hands, kiss each other on the face, and give the other a warm embrace. Karamo slouches to hug Tan, who is a bit shorter, and couches his arms underneath Tan’s. Back in the first episode, when straight guy Tom has an exuberant reaction to his home’s makeover, Jonathan begins to tear up. Tan takes his thumbs and flicks the tears off Jonathan’s reddened face. The moments don’t end: hand-holding, hugging, kissing, complimenting.

The underlying thesis of Queer Eye has always been that queer life has benefits that heterosexual men can embrace. But the affection among this new Fab Fave shows benefits for both heterosexual and queer viewers. There are more lessons to learn than just what shirt to wear or how much hair product to use. The queer affection on display offers a stark contrast to the way the straight counterparts operate. Tom and his buddies, for example, bond by showing off their cars at auto shows. But the affection on display shows that queer men can offer straight men an alternate version of male camaraderie: one that is touchy-feely and rooted in taking care of your friends’ emotional needs and desire for platonic physical human interaction.

As a queer person, it’s also a refreshing reminder of the power of queer intimacy. How often has consensual physicalsexual or non-sexual!touch from our friends been our source of relief or reinvigoration? While heterosexual men have to construct rituals in order to touch other, queer men and queer people bypass those constructions. Our intimacy is routine. Our physical and emotional support is readily available and often offered freely. And this familial, communal commitment to mental and emotional well-being is one of the queer community’s greatest assets.