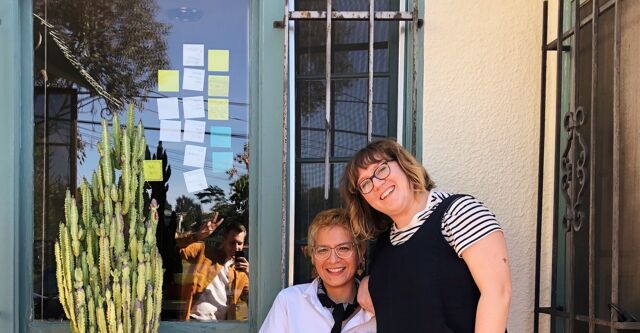 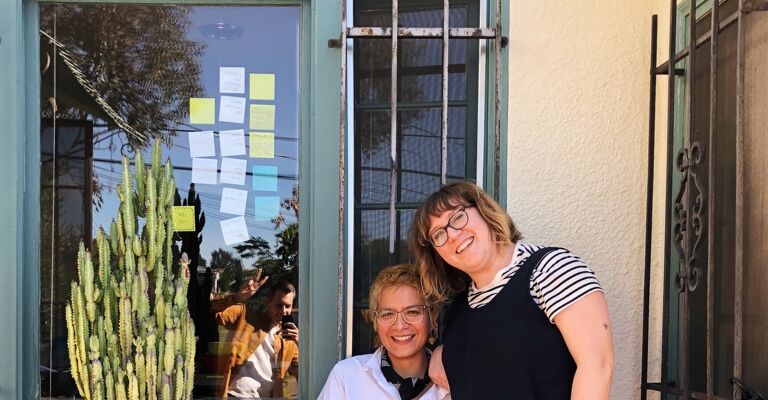 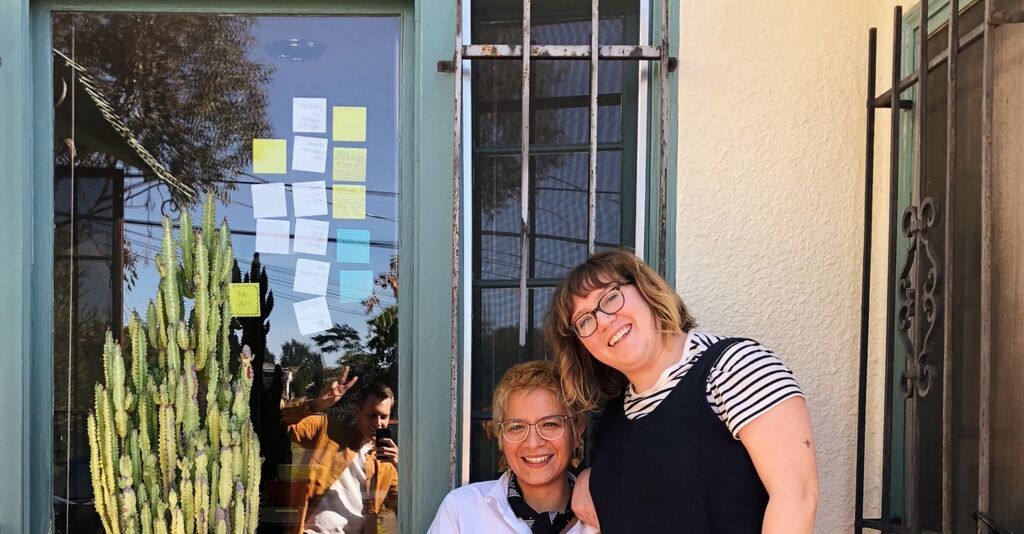 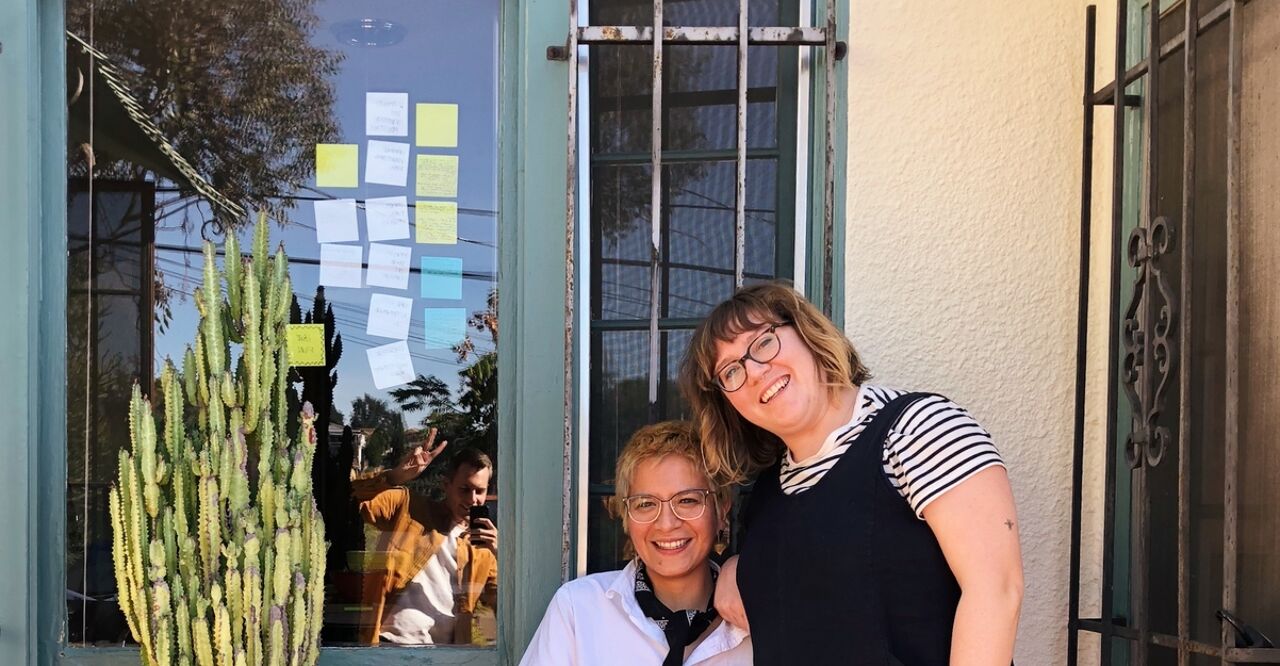 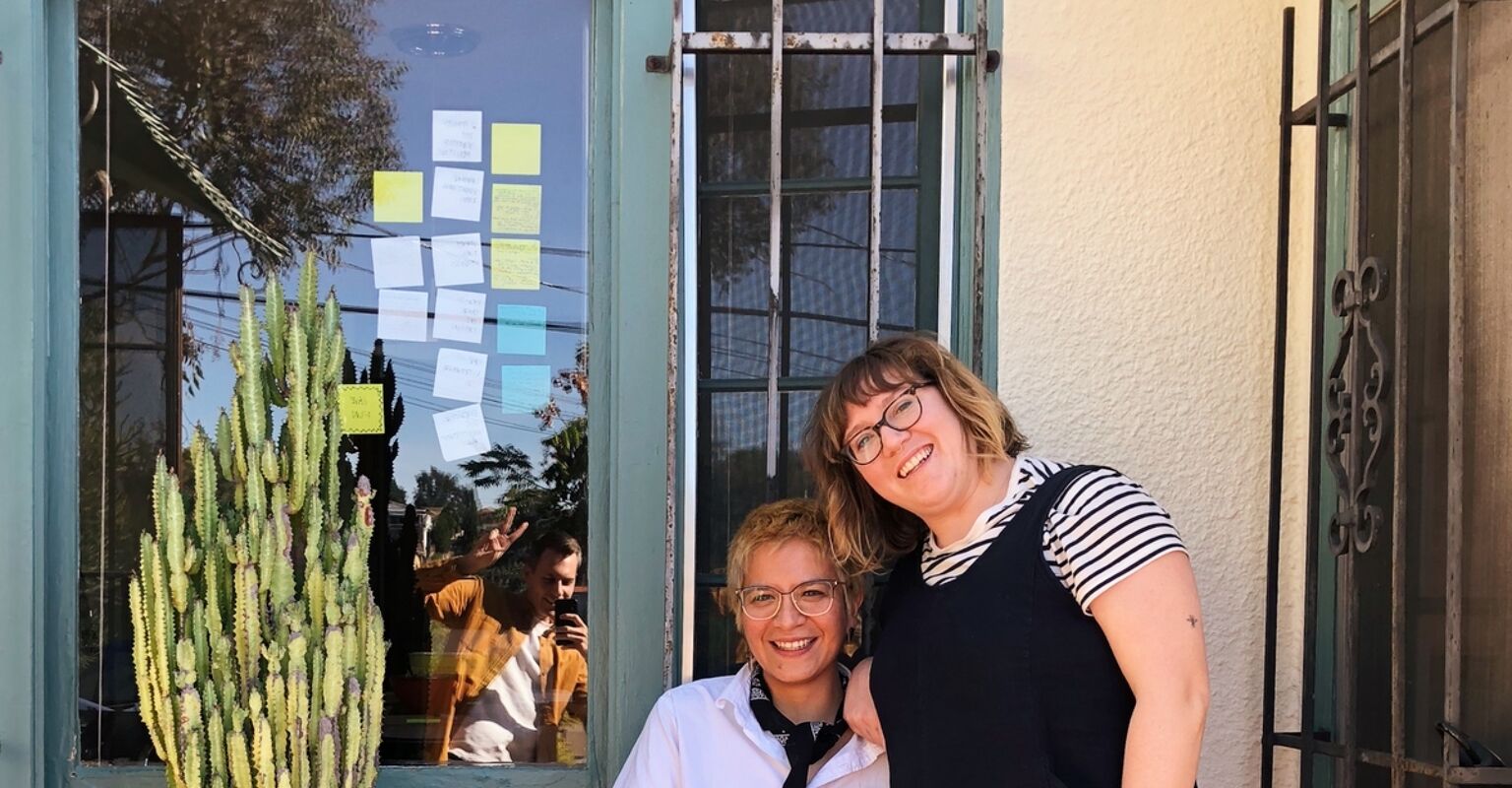 Last year, the publisher of biannual gay men’s magazine Hello Mr., Ryan Fitzgibbon, launched a campaign to fund a new non-profit sanctioned project, The Issues, in support of building up smaller, lesser-known publications. The residency kicked off with Brunchclub, a QPOC-focused zine from creators Colby Anderson and Ernest Macias that was released in the ninth issue of Hello Mr.

Now, INTO is proud to be in partnership with Hello Mr. in supporting Dyke Queen as the next Issues resident. 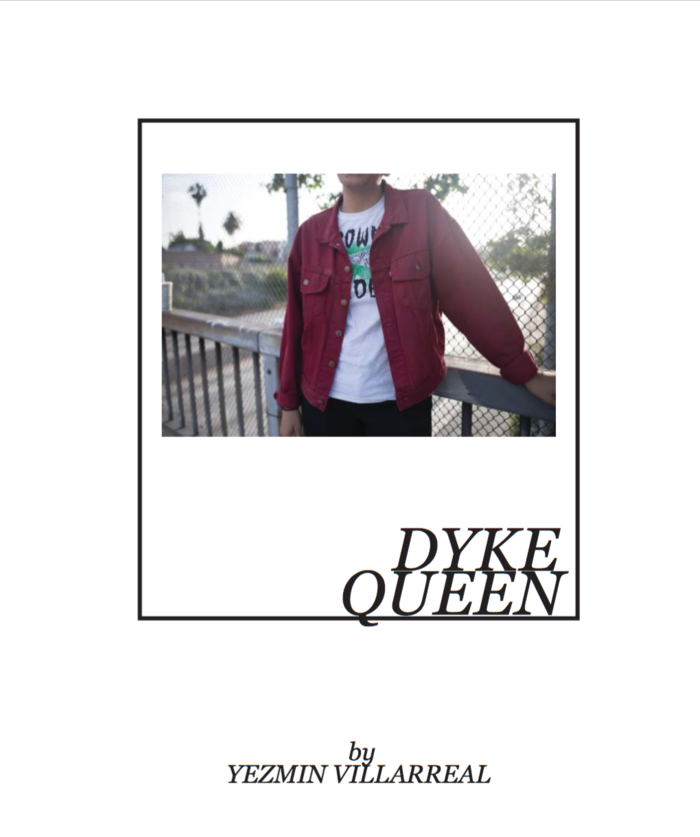 “I launched Hello Mr. magazine in 2012 to create a platform for emerging talent and unheard voices, and to generate more inclusive representation of the LGBTQ community in media,” Fitzgibbon says. “One of the most common questions I’ve received since launching Hello Mr. is why I haven’t started a magazine for women, similar to how Fantastic Man and The Gentlewoman co-exist on the shelf.”

As he says, “rather than exploit a niche,” he saw an opportunity to help Dyke Queen in its second issue, and creators Yezmin Villarreal and Bridget Ore were selected for the second The Issues residency.

“The first issue was very much a DIY personal zine that came from an emotional space,” Villarreal says. “There was a kind of reflecting on the past year and experiences in the community that [Bridget and I] were both a part of of.” 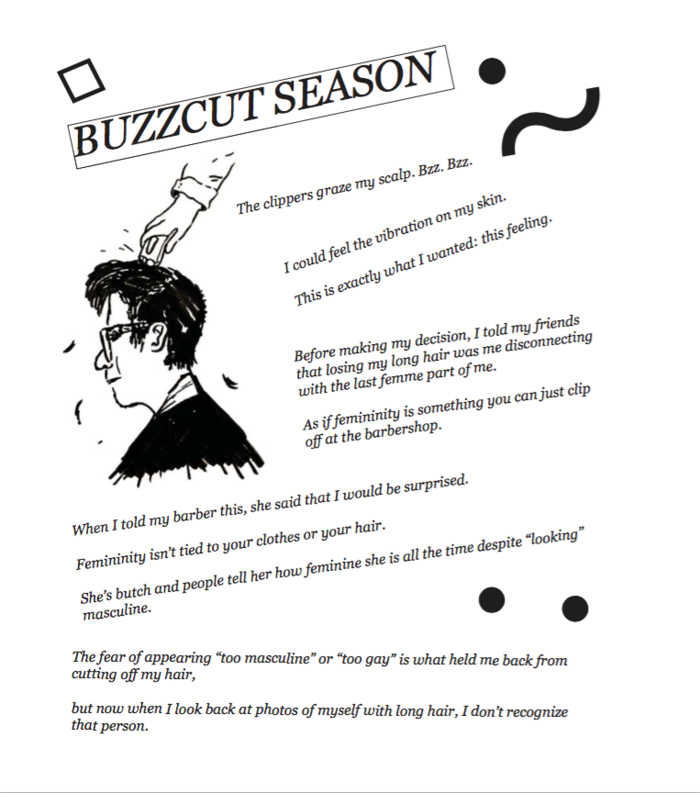 The content in the first issue of Dyke Queen ranged from an illustrated story of Villarreal’s first dyke haircut, to a personal essay about the reverberations of Pulse.

“Moving from there into working with Hello Mr.,” Villarreal says, “[Dyke Queen] is kind of that creative emotional space that allows other people to use that as a platform.”

Villarreal says the second issue, due out in June, will move more into a space of collaborating with and celebrating other queer women. She cites fashion designer Barbara Sanchez-Kane and musicians St. Vincent and Torres as inspirations, but also her friends.

“[I’ve wanted to see] these very beautiful intimate sentimental photographs and literary work and essays and talking about romance and dating and friendships–the things that I feel we all talk about when we’re together with our friends,” she says. “Those are the conversations we all [have] and that’s the vibe I want to bring to Dyke Queen this new issue as a magazine.”

For example, Dyke Queen issue 2 will feature work by embroidery artist Teresita de la Torre, whose work is set in a domestic context. She embroiders phrases such as “soy lesbiana” and “marimacha” or phrases like “me enamore de una mujer y nunca pense que pudiera ser tan feliz” (“i fell in love with a woman and never knew i could be so happy”) on bed sheets, towels, napkins, and placemats. 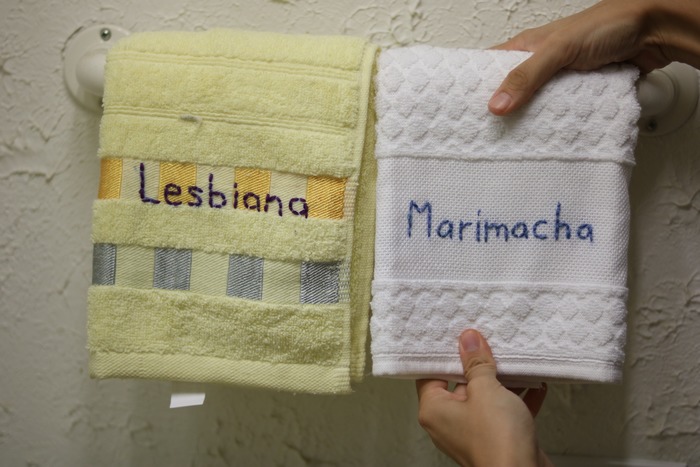 “She makes embroidery pieces as a way to have a conversation with her mother about queer love and heartbreak,” Villarreal says, noting de la Torre chose that medium because it’s one “that she grew up watching her mother practice throughout her life.”

Artist @teresita_dlt on identifying more with the word “#Marimacha” vs “#dyke”

The conversations had in and about Dyke Queen are similarly about identity, and how “dyke” is one that has been so polarizing yet reclaimed.

“People maybe don’t identify as a dyke, or aren’t as familiar or comfortable with the word,” Villarreal says, “and to me it’s like, you don’t even necessarily have to be a lesbianalso, I think that is kind of blurred now that people identify more with queer. You don’t have to be a lesbian to be a dyke. I say it’s like ‘for dykes, by dykes’ and I’m not putting any labels an boundaries on whoever chooses to be part of that.”

“It’s about harnessing personal power,” Ore says. “I want to encourage people to feel confident in that identity, to make work about that identity, and help people who may be aren’t feeling integrated or aren’t embracing themselves or accepting themselves to reinforce the message that it’s beautiful, it’s powerful, it’s a tool for us to make our way in the world.” 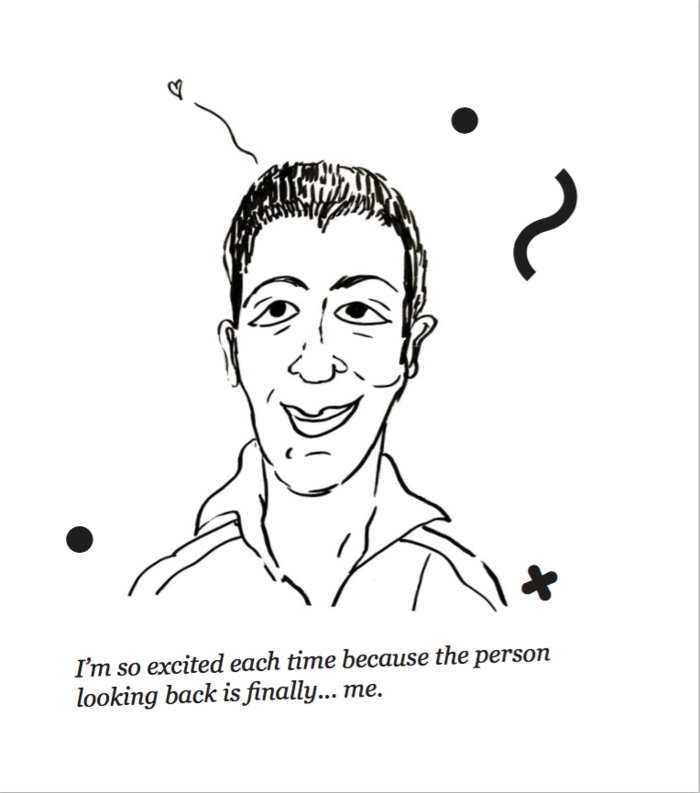 Dyke Queen is like Hello Mr. in that it moves beyond “Gay 101.” The stories, photos, illustrations, and poetry are less about coming into being queer, but the experiences of being realized queer people.

“It’s that next phase when you fully integrate [your queerness] as a person, and you can fully step into your power as a dyke, as a creative person, whatever passion you choose to follow, and relate to people more openly and not be kind of hamstrung by the negative interpretations of our sexuality that a lot of our culture has,” Ore says.

Villarreal says there are too few options for queer women to see themselves in this way. She cites the h_e_r_s_t_o_r_y Instagram account, which highlights ephemera from lesbian/bisexual women’s history, as inspiration.

“I wanted to show womengroups of women togetherjust being really caring and loving toward each other, and visually showing that space of friendship between queer women that’s sometimes blurred,” Villarreal says. “You can have very romantic friendships with your friends because it’s so personal when you’re gay.

“Articulating your passion for the thing you want to create is more important than what it looks like,” Fitzgibbon says, praising Dyke Queen‘s storytelling in both imagery and words. “Of course printed artifacts can and should be beautiful objects, but we all know that ‘pretty’ doesn’t always translate into substance. Bridget and Yezmin, however, delivered both.”

Along with Fitzgibbon, INTO and graphic designer Gwen O’Brien are working to help mentor Villarreal and Ore in creating Dyke Queen 2.0. The final product will be distributed inside the tenth issue of Hello Mr., out this summer, and also be available at the official launch party in Los Angeles.