Janet Mock just made her directorial debut on Episode Six of FX’s POSE,  becoming the first trans woman of color to write, produce, and direct on a series. The multi-talented former talk show host turned TV impresario spoke with INTO about working with trans actors telling trans-themed stories, and the character she sees herself in most.

What are the most common reactions that are you seeing come out of POSE?

I think people are surprised by how much they cry. I think when you hear about a show about the ball scene and maybe the dance musical spectacle of 1980, you think of disco balls, vogue, and all this flamboyant glitter gorgeousness which I think our show has, but the majority of the show is outside the ballroom. What are their lives like when they have to leave the safe space they created for themselves and bump their bodies against New York City in a time period and culture that was not centering or safe for them.  It’s about the inventive, creative ways that they built family, safety nets, love, and affirmation and I think it’s that sense of family drama, that our show really pushes people to have these reactions.

The first episode that I was credited with writing was Episode Three, “Giving and Receiving,” which was our Christmas in June spectacular. Ryan loved the idea of centering trans and queer people as building new traditions around the holidays, which can be triggering for a lot of queer and trans folk who are not welcomed home.

So what does that new home base look like? For me, writing that episode, specifically Indya [Moore]’s story, I got the most reactions about all of the fears, how much it made them feel, how many times they had to watch it, having to pause, revisiting it, and how it has become an instant Christmas watching time period classic for queer/trans people who often don’t have access to those kinds of stories that center them.

All of Elektra’s lines and reads and Pray Tell’s lines — the reads, the looks, the competition, and shade — is the really great stuff that I think bubbles up and people love. The best reaction and biggest feeling of affirmation is hearing from trans women of color about how they feel like for the first time they’re seeing the struggles and triumphs that they’ve experienced in their lives are being fully reflected back to them.

This cast is so heavy with trans actors in front of and behind the scenes which is unheard of. How does that change the way these characters are portrayed from script to screen?

The number one thing is safety, comfort, and trust. So, for me, I know that that was the number one thing that propelled me to take the detour in my career and give my life and time over for the past year to the show because it all starts with the writing. Television is a writer’s medium, so knowing that I would be the trans woman of color in the room and the first to be hired in a Hollywood writers’ room, I knew it was important to do that because I wanted to ensure that the scripts were authentic, real, and that they were culturally specific to not just trans people, not just to people of color, but to trans women of color.

So, because I come through that space, that is my experience, that is my community, those are my sisters and siblings, I knew that being in the writers’ room was vitally important. So, I wasn’t the only one, knowing we also have choreographers like Leiomy Maldonado from the ball scene, a legendary dancer, and voguer [who was] featured in a Nike commercial last year. That our actresses on camera [who] are trans women of color, playing trans women of color know that when they’re given a move from Leiomy or words from the script from me, that they feel safe, that they feel like they can trust, so, therefore, they can do the work that an actor has to do which is be vulnerable and show up.

They’re embodying something that feels real and authentic to them. So, what’s great is that POSE comes after the emergence of Laverne Cox and Orange is the New Black. In that space, she was not centered; she was part of an ensemble so we didn’t see much of her life experience. Now, we’ve come to a time period where I think the audience has demanded that there are trans women behind the scenes and that trans women are working on shows.

Our show has over 150 LGBT people in the cast and crew. So there is a large sense that this is our show and this belongs to us, so I think that helps tell a more authentic story and I think that’s where we need to go via storytelling. Though Ryan [Murphy] is the vessel and the machine that has brought that all together, the show is not about him. It is under Ryan Murphy Television, but he has made it very clear that the show is ours and that Steven Canals, who is the co-creator, an Afro-Latino queer man from the Bronx who wrote the original pilot script, that we are empowered to say that this is our show, that we’re protective of this show, and that we also are clear that we are held accountable by our community because we’re writing for and about our community, our people, so I think there’s a deeper investment to make sure that we get it right. 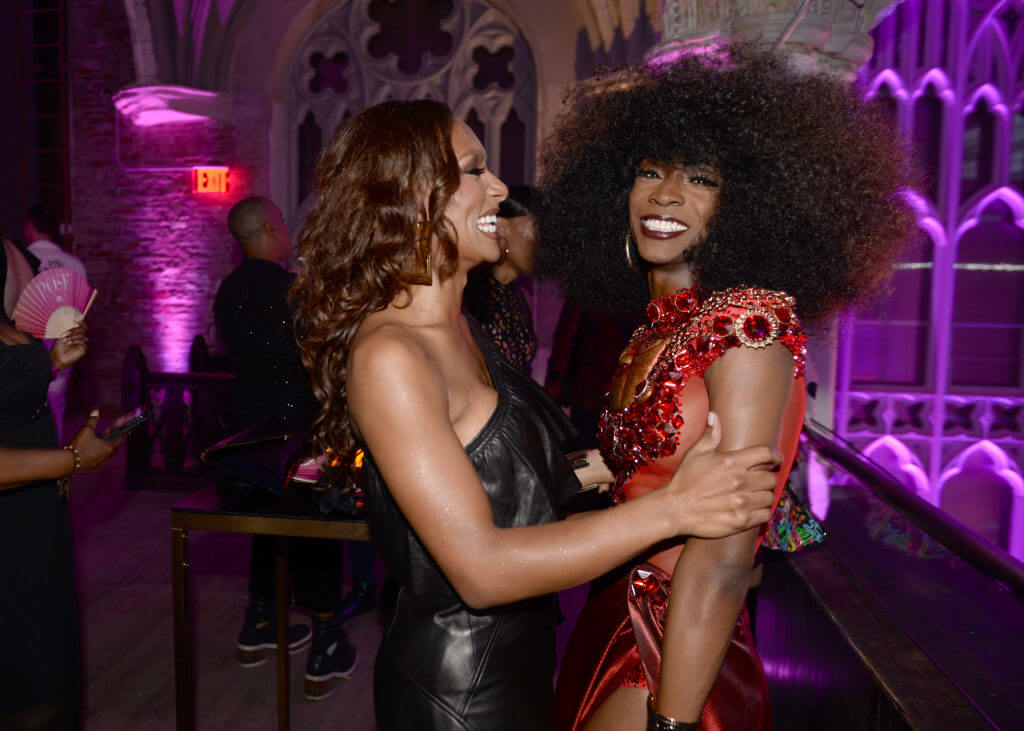 You pay such great homage to the ballroom scene. What do you think are lessons and values that you hope people watching this series will take away from watching such a culturally dynamic scene?

I hope it shows the genius, creativity, and resilience of this culture. The scene was created by Crystal LaBeija after dealing with discrimination in white pageants where trans women of color, specifically black, trans girls were never winning, so she went off and created her own scene and that scene has grown to become what it is today. That now today, we have POSE which is powerful and amazing and that’s what we’re talking about.

But let’s not forget that My House exists, too, on Viceland and that docuseries shows the lives and struggles of people who are engaged in the New York ballroom scene today. They show it in a different way, in a grittier way, in a way that anchors it in the present issues that I think do mirror and reflect the issues that we’re showing in 1987/1988 New York City in our first season.

So I think it’s about the resilience to me and the family structure. The idea of making your own safe space, a space where you can not only live out your fantasy and project how you want to be seen in the world, but also go home and be surrounded by people who love you, take care of you, feed you, nurture you, and champion you in the way that Blanca Evangelista champions Damon to audition for that school and pushes him to do it. I think mentorship and family is a great lesson to take away.

Which character do you see yourself the most in?

It has to be Angel. I think I put a lot of my own younger self in her. I think she’s a lot more confident and daring than I was, but I think her want for someone to love and accept all of her is something that speaks to a lot of trans women who often have a hard time finding reciprocal partnerships with men. So a lot of me is in her.

Do you think LGBTQ youth will see POSE as a piece of history that needs to be remembered?

One of the things that attracted me to the series is the fact that it wasn’t a historical piece, it’s a period piece. I think we can learn so much from history about ourselves today based on where we were. We highlight HIV/AIDS a lot because for people of color, black gay men, and black trans women, HIV/AIDS is still an epidemic, it’s still taking our people, and it hasn’t gone away. So I hope that those that are watching are clear about that lineage, the struggle, how it has not gone away, and that we need more conversations like the one Blanca had with Damon.

We need specific conversations about sex education that aren’t just catered toward a man and a woman having sex, but also men having sex with one another, and trans folk having sex with one another, trans folk having sex with cis folk and more. We need more comprehensive education around that so I hope our show models that. It’s a huge boogeyman that exists and it just gets deeper and deeper, that’s the introduction of Pray Tell’s storyline. We learn about his struggle, his partner’s struggle, and grappling and dealing with HIV/AIDS as well as Blanca having to deal with that. That’s the thing about television; we invite people into our home through the medium and we fall in love with them and we’re held accountable when bad things happen to them and we’re gutted and I think that’s what our show does. It doesn’t only educate and entertain but I hope inspires people to greater knowledge and hopefully action and allyship. 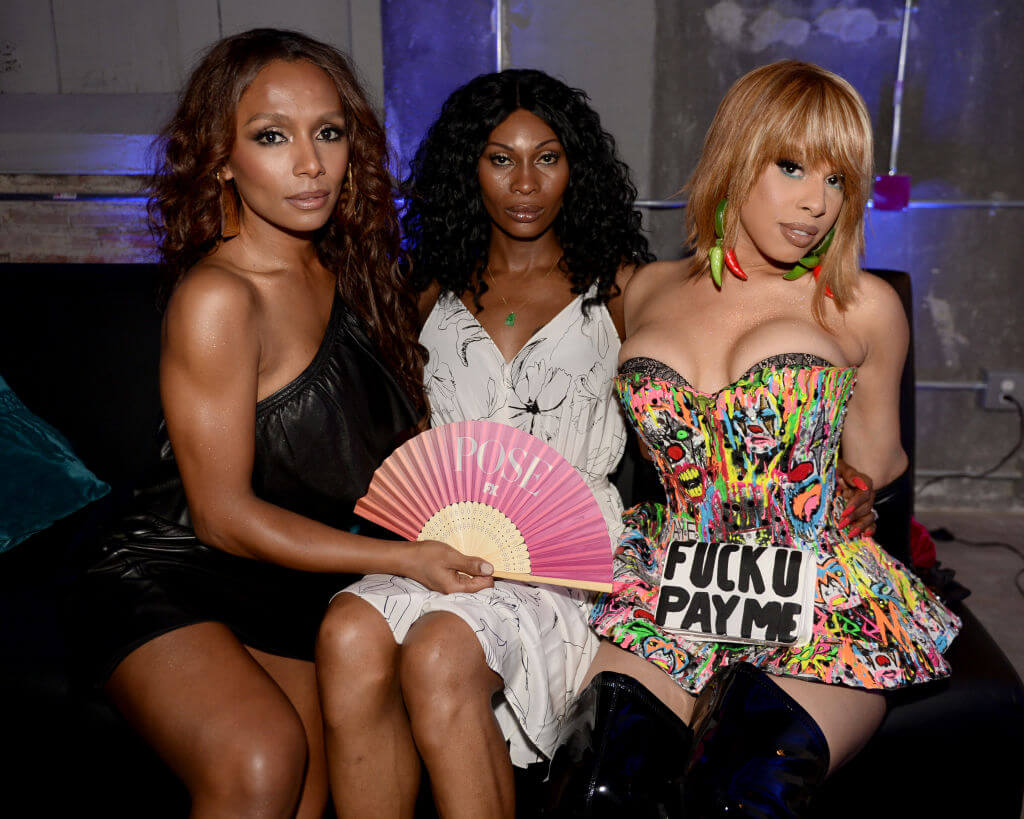 What is the title of the current chapter of your life?

What song is able to turn your mood around, do a 180 that makes you feel the best about yourself?

Favorite drink to order at a bar?

If they have it, a frozen margarita.

What does Pride mean to you?

I think it’s a great celebration. It’s a celebration of how far we’ve gone and how much more we need to do. It’s also a celebration of the people who put their bodies and lives on the line to enable us to have space and access to all the things we’re able to have now.

I think of Marsha P. Johnson and Sylvia Rivera who were at the Stonewall riots. I think of black queer women like Audre Lorde and Barbara Smith who created feminist texts, words, and stories for us to better see ourselves. I think of prolific writers, thinkers, and activists like James Baldwin and Bayard Rustin who created blueprints for us to find our own sense of liberation.

For me, Pride is an enduring reminder of that legacy, but also reminder though it is a celebration and though we are marching and having parades, flags, and parties, and all these things, that we also have to be clear that our movement started off as riots, it started off as a resistance and fighting back against anyone policing our identities, our bodies, our sexuality, and ourselves.

What advice do you have for LGBTQ youth?

Listen to yourself, surround yourself with people who nod when you speak, who affirm you, and never let anyone convince you that you are wrong and undeserving because you deserve all of the things that this world has to offer.

Keep up with Janet along with her work and updates over on Twitter and Instagram and be sure to catch POSE on FX every Sunday at 9pm EST.