Throughout its grueling 14 seasons, Grey’s Anatomy has been a revolving door of its own self-made starsfrom Patrick Dempsey to Sandra Oh, Katherine Heigl and all the McSteamy’s in between, it’s typical for cast members to move on. But with last week’s news of Jessica Capshaw’s exit, fans are majorly disappointed.

Capshaw entered the show in its fifth season as Arizona Robbins, the bubbly new addition to Seattle Grace who stole the heart of Callie Torres (Sara Ramirez). News broke last Thursday that Capshaw and Sarah Drew would be leaving the show, and as the last remaining queer character on the long-running ABC drama, it’s likely that Arizona will fall victim to the harmful Bury Your Gays trope, like so many queer female TV characters before her. Many fans have declared that they’d stop watching the show next seasonwhich happens every time a Grey’s cast member exitsbut still, this one stings.

What’s worse, the exit was abrupt and sudden. In a social media post, Drew alleges she was given the boot just 48 hours before the news broke. Capshaw also took to social media to thank her fans, writing, “Arizona Robbins is kind, intelligent, funny, insightful, bold, playful, fierce and really good at her job.” The actress continued, “She was one of the first members of the LGBTQ community to be represented in a series regular role on network television. Her impact on the world is permanent and forever.” 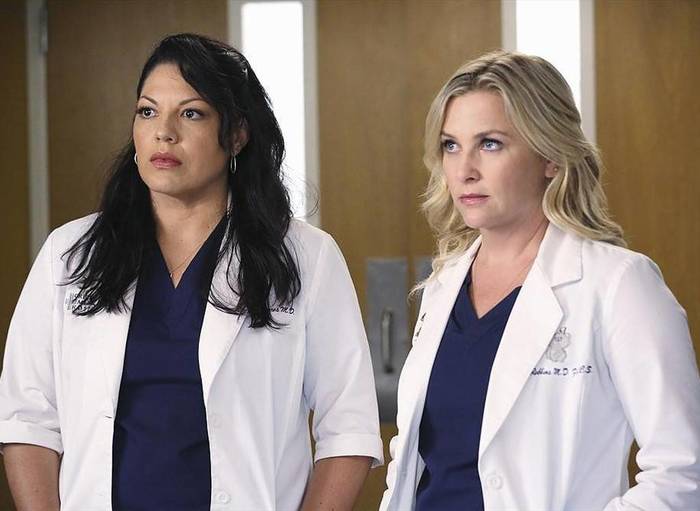 Since the story was published, many have speculated that Ellen Pompeo’s pay spike lead to Capshaw and Drew’s departure, which Pompeo and showrunner Krista Vernoff promptly denied. Deadline reported that Pompeo took at $20 million raise and two-year contract renewal, following a candid interview in January when the titular Grey’s lead advocated for equal pay.

“The suggestion that our cast changes are in any way related to Ellen Pompeo’s salary renegotiation is wrong and hurtful and misguided,” Vernoff wrote on Twitter. It smacks of an old, broken, patriarchal notion that women must be pitted against each other and that one woman’s success will be costly to others.” She added, “Ellen Pompeo has not only advocated passionately for her fellow cast members, she has taken the time to educate women worldwide as to how to advocate for themselves and that must not now be twisted.” Vernoff alleges that the cast change was a “creative” one, and that Grey (Pompeo) is the show’s only constant.

Given her 14-season run since the show’s launch in 2005, Pompeo has also served as an executive producer and occasional director on the show. Since Thursday’s news broke, she’s been vocal on social media too. “We R grateful all of you are so passionate, but if you knew these two women the way I know them, they would not approve of all this nastiness.” 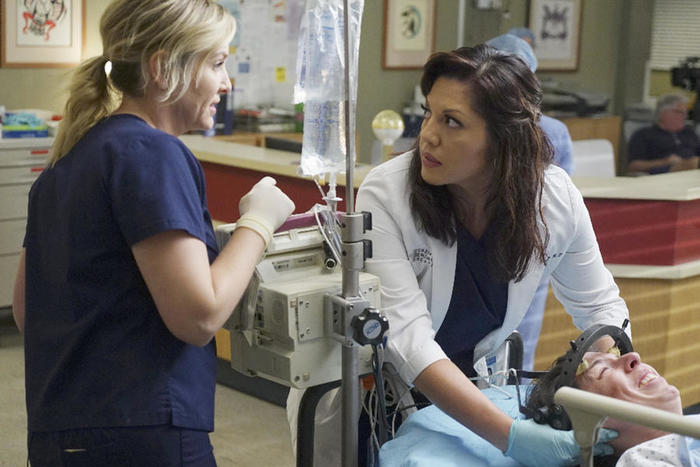 Shonda Rhimes, the creator of Grey’s Anatomy, also made an official statement on Twitter, addressing the disappointment of LGBTQ fans. “Both Arizona Robbins and April Kepner are not only beloved but iconicboth the LGBTQ and devout Christian communities are underrepresented on TV,” she wrote. “I will be forever grateful to both Jessica and Sarah for bringing these characters to life with such vibrant performance and for inspiring women around the globe.”

This year, GLAAD reported that the 2017-2018 season was the best ever for LGBTQ representation on broadcast television, but the numbers were still pretty bleak, with only 6.4% of regular characters identifying as LGBTQ. The report also noted that broadcast TV was still recovering from two previously deadly seasons, which included the deaths of numerous lesbian and bisexual women characters. And with ABC placing second to last in LGBTQ representation on broadcast networks, this news definitely warrants disappointed reactions.

During her time in the embattled Seattle Grace, Arizona has survived a plane crash, a child custody battle, amongst other seriously soapy traumasbut since Sara Ramirez’s departure, she has maintained a relatively drama-free life. She was an iconic lesbian character and she will be sorely missed by the queer community.