Jinkx Monsoon has known her whole life that she didn’t identify as male.

Despite knowing this, she chose not to identify as trans for a long time out of respect for the struggles and journeys of her trans friends, many of whom she met as a teen at Portland, Oregon’s Sexual Minority Youth Resource Center. It was then that she began doing drag and began to think of herself as something other than her gender assigned at birth.

Monsoon reminded her fans of this fact recently when she tweeted that she came out as non-binary four years ago. In an interview with INTO, Monsoon said she issued the tweet to remind people in the queer community that “not every drag queen identifies as a cis male out of drag.”

Here’s what Jinkx Monsoon wants you to know about false assumptions, troubles at the TSA, and dressing up as Morticia Addams. 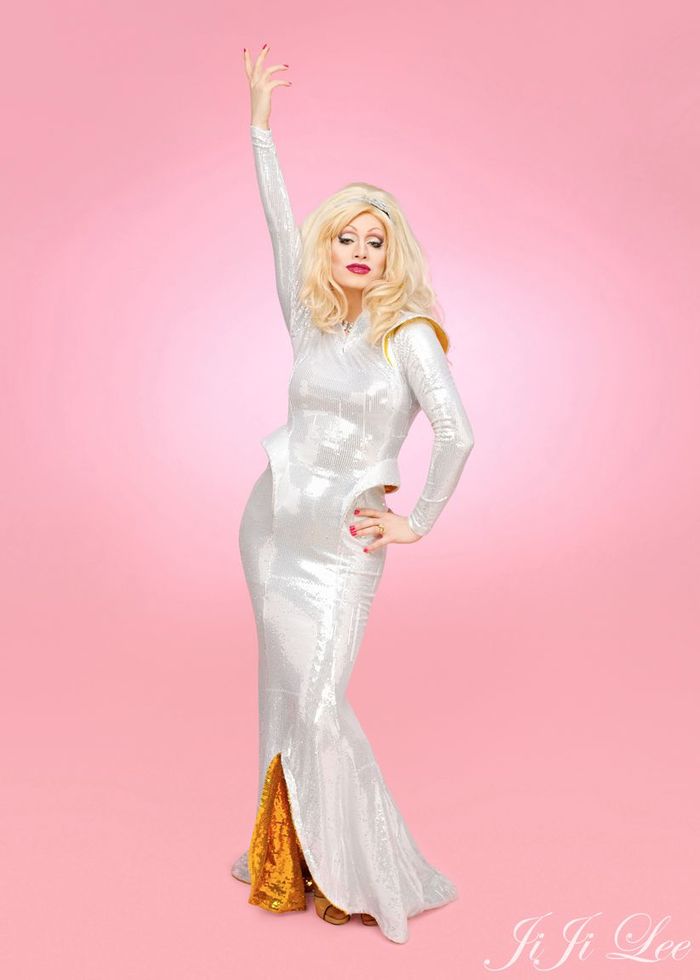 One of the things that I loved about your tweetstorm was that a lot of people use drag to explore gender identity and you brought that up. When you started, did you go into it thinking this was a way for you to explore your gender?

I just would find ways to express my gender identity in very small ways throughout my life. I really wasn’t happy wearing the clothes of a boy. Even as a child, I would find little ways to sneak things in. My aunt and my grandma were always very supportive of me expressing myself and my mom was much more cautious. Basically, with my family, the rule was that I could wear anything I wanted to at home, but I was warned a lot that to go to school wearing certain things would cause a lot more trouble for me.

I used to wrap up blankets, I would wrap up this red afghan that made it look like a dress and in my mind, I was Morticia Addams. I used to wear my mom’s big silky night shirts and I’d take one of her headbands and put it around my waist to create a dress out of that.

I even remember a conversation with my mom, she said to me, if you feel like you’re more of a girl there is a way that you can become a girl. And she basically explained, you know, transitioning to me very bluntly, in her best effort. But what she said was, if you want to become a girl, you can become a girl. First, you’ll take a medicine that will help you become a girl and one day we’ll take you to the doctor, and he can take your penis off. At the sound of that, I was against it because I didn’t want to lose my penis. [laughs]

At 15 years old, when I saw my first drag show, it did seem like a safe way, within my community, to finally get to express this part of myself that I knew was always there. The first time I did drag, I knew that was it. I knew that I was going to be a drag queen for the rest of my life, even though I would tell people, “Oh, I’m just going to do this tonight for this party,” or “I’m just going to do it for this show.”

There was always a stigma around drag in the queer community. Even at this all-ages dance club that I used to work at as a teenager. It made you undateable, guys didn’t want to date a guy that dressed up as a girl.

Drag is the way that I express myself in a safe way, and drag is also the way that I’m able to express myself day to day. Now, I can tell you that none of the clothes that I wear were intended for men, they’re all female clothing or unisex clothing. I go to the airport and I’m mistaken for a woman. It’s a real hassle going through TSA. It’s real hassle when you go into the scanner they have to tell the machine whether you’re male or female. They often times scan me as female, and then they ask me what’s in my pants and I have to explain to them, “That’s my dick,” and they’re the one who scanned me as female and if they had asked, I would’ve told them.

I’ll tell you a story about one of the most mortifying times. I step into the scanner, they scan me as female and the woman comes up to me and says, “We need to talk! Look over at the scanner!” And there’s a big yellow blob on my crotch in the scan and she goes, “What have you got in there?” And I say, “Well, actually, that’s my penis, I’m male-bodied and you should re-scan me real quick as a male.” And she goes “You’re a man?! You’re a man!? He’s a man everybody! We’re gonna have to rescan him! I guess he’s a man!” She starts shouting at the rest of the TSA people.

And for me, I was like, this isn’t even the worst story of a trans-identified person going through security. When I think of all the different trans people I meet and the different way their bodies could show up on a scanner. I think about really passable female trans people who still have their penis and have no intention of removing their penis going into that scanner and having something like that happen to them and have it be even 10 times more mortifying. I can only imagine what it’s like for other people. For me, it was embarrassing, but I can imagine for other people with other identities and different circumstances, I can just imagine how mortifying it would be to go through that process and have someone act like that just because you don’t fit into what they consider as normal.

You said you began ID-ing as NB about four years ago, which would’ve been right after season 5 of Drag Race. Did being in that competition change your idea of your gender at all?

I had identified as gender fluid before I went on Drag Race, I was very femme presenting, but I never meant to make a big deal out of it. I just didn’t feel like it was fair of me to make a big deal about my gender identity when I had seen so many other friends of mine go through much bigger struggles to be themselves. I felt selfish. Doing Drag Race, being femme presenting became a part of my whole life. It was now my career, it was something I got to do every day instead of just on the weekends as a hobby, so I was speaking out about it, and I can tell you the exact story.

I was speaking out under the fact that Ellen DeGeneres was under fire for a very cheap, very old drag queen joke. She was making the “Liza Minnelli is a drag queen” joke. It was a really tired, old joke. I got a lot of backlash from trans-identified people saying that I wasn’t allowed to have an opinion about whether it was offensive to trans people because I didn’t identify as trans. On Facebook, I said in a conversation with someone, he called me out privately on his Facebook and said, “If you’re not trans, you don’t understand how something like that could be offensive to the trans community.”

That day, I tweeted about it, that I identify as gender non-binary and that doesn’t mean my opinion means any more or any less, it’s just my opinion. It doesn’t represent the opinion of the trans community, but I do have an opinion and I’d love to share it.

Your final tweet said your “future is female.” What does that mean?

I just am sick of male-dominated everything. I know that sounds a little hypocritical of a male-bodied person, but I’m just over the toxicity of masculinity. That doesn’t mean that there’s anything wrong with masculinity or presenting as masculine. It doesn’t mean there’s anything wrong with people who enjoy presenting their masculinity, but there is a toxicity around it. Especially in America, there is this male bravado that’s so heavily encouraged in our culture that leads to violence as a justification of masculinity. It leads to prejudice towards women, gay people, and queer people, as a way of displaying your masculinity. It’s like, to be masculine you have to act a certain way and oftentimes that certain way involves being toxic towards other people. There’s a way to express your masculinity, there’s a way to be masculine that doesn’t rely on taking other people down.

I do know that I’m never going to more towards the masculine side, but that’s my own preference. There’s nothing wrong with masculinity; there’s only wrong with toxic masculine presentation.