When it comes to gaming, Jinkx Monsoon doesn’t play games. While you probably know Jinkx as the crowned winner of season 5 of RuPaul’s Drag Race, when she’s not on tour, or in her Cool Mom videos, you can find her playing Overwatch or Breath of the Wild.

If you’ve only seen her on the show, it may come as a surprise that Monsoon is secretly a huge nerd, but it turns out she has a long history with video games. INTO spoke with Monsoon about her gaming influences, her desire for better gender representation, and much more.

Have you always been into video games? What’s your earliest video game-related memory?

I have been into video games for as long as I can remember. It started with me watching my dad play Mario on the Nintendo. We’re talking old school, first Nintendo console, with the little rectangle controllers. I also used to watch my aunt play games like The Little Mermaid and Darkwing Duck, and I would sit beside her and pretend to be Flounder, or Morgana, helping her along. So nerdy.

When the Super Nintendo was introduced, that’s when I really got hooked. The first game that I beat by myself, as a player and not a spectator, was The Legend of Zelda: A Link to the Past. Other favorites include Harvest Moon and Super Mario RPG. These game series continued to be my favorite when the Nintendo 64 came out. On more than one occasion, I faked being sick so I could stay home and play Harvest Moon 64.

Is there a specific genre of video game that you always gravitate towards?

Anything where I get to have magic or superpowers. The most realistic game I got sucked into was Fallout 4, and I think that’s saying something.

In your Overwatch video with Nick Sahoyah, you off-handedly mention being harassed by aggressive gamer nerds from a young age. Is that something you had to deal with a lot growing up?

Well, when I was a kid, we didn’t have games you could play online with other live players. Well, they existed, but I didn’t play them. Video games were more of a private thing for me. They were an escape from being the chubby, effeminate, weird kid at school, and were often my way of closing myself off.

Nowadays, when I play Overwatch and I hear the things kids say to each other and call each other, I’m shocked. Little tiny voices calling each other horrible slurs and giggling about it. I can only imagine that these kids are similar to what I was as a child. Weird kids and outcasts who have trouble making connections in real life, so they play video games, where they can be top dog. It’s their way of being a jock. Maybe they act aggressive because they’re repeating the behavior that’s been done to them. Or maybe they’re just jerks. I dunno.

But as a kid, video games were the one thing I had in common with the straight, “normal” boys at school. So when I talked to the other boys at school, I kept it to video games and cartoons, not Greek mythology and crystals (which were my other obsessions.)

Has your relationship with gaming changed since you won Drag Race? Do you wish you had more time to play games?

I think I get just the right amount of time to play games, seeing as if I didn’t have such a busy career, I’d prolly just be playing games all day. Haha. Having a portable Nintendo Switch helps me get in some gaming on long flights and in hotel rooms.

Of course, I was addicted to The Legend of Zelda: Breath of the Wild. I played it until I had completed about 95% of everything you can possibly do in that game. (I’m a bit of a perfectionist.)

Is there a connection between drag and video games for you? Has your drag been influenced by gaming?

Yes and no. Yes, because whenever I play a game where you can customize your character, I always create a fierce, badass lady to play as. (I pretty much only play games that allow you to play as a female. For the most part, at least.) My avatars are always female and always a little drag queen inspired. I’ve had a few looks made for myself that are inspired by costumes from video games. That’s the closest I’ve ever gotten to cosplaying. Haha. At least one of my looks this year for RuPaul’s DragCon is inspired by Dragon Age: Inquisition.

But also, video games are a departure from my work life. There’s nothing better than coming home from months on tour and getting sucked into a new game. It’s like a vacation without having to go anywhere. 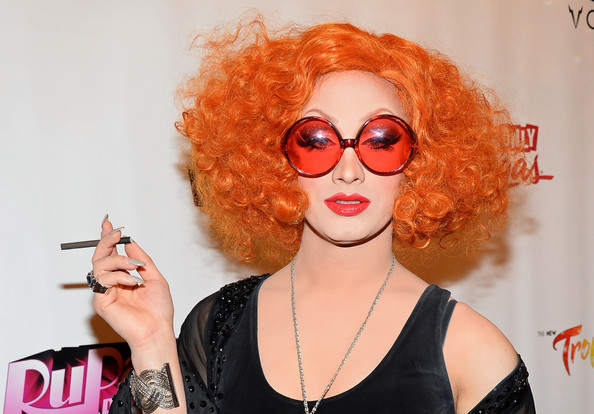 In her All Stars 3 reveal, Trixie jokes about coming home after a weekend of talking to teenagers as a queen and then playing games with more teenagers, “but it’s a different demographic, let me tell you.” Do you play games online? And if so, does it ever feel weird to be immediately surrounded by a different community of straight teenagers who might not know what drag is?

Well, the biggest way I stay away from this is that I don’t use a microphone when I play. I listen to the group chat (for team advantage) but I don’t contribute. If I did, I’d prolly just nag these kids about their ignorance, and no one wants to play video games with Mom.

I absolutely explored my gender through video games. Especially through The Sims. I would create rather mundane characters and scenarios that I felt were realistic, and let me play out, through an avatar, my inner female fantasies.

Of course I had some crushes. Link is my dream date, and let’s face it: Princess Peach is a style icon for me and many other drag queens.

Have you had any funny or noteworthy gaming usernames?

No. I’m a nerd. I name all my characters and user handles after Greek goddesses.

I saw that you posted an article I wrote (thank you, by the way) about non-binary gamers and character customization. Is there something you’d like to see more in video games in regards to customization?

I want to see WAY more representation of queer and gender non-conforming characters. Although, I think some games really try within the confines of our heteronormative culture. For instance, the Dragon Age series has always embraced same-sex relationships, as well as The Elder Scrolls games and the Fable franchise.

But we’re still working towards gender inclusivity. It’s an elusive subject for some gamers, but I’ve seen examples throughout my gaming history. Gender bending has already occurred in games like Metroid, and like with Princess Zelda, who appears as the mysterious Sheik. And guess what?! Gamers were fine with it!

They appreciate the nuance of the story and aren’t all that hung up on the non-conventional gender aspects. I think we need to give the audience more credit and trust that they can handle us pushing the envelope even further.