At age 27,  Justin Sayre left acting, attended a gathering of the Radical Faeries, and came back to New York inspired to create The Meeting of the International Order of Sodomites. The show went on to run for eight years and kickstarted his concurrent work as a screenwriter and author.

Sayre travels from his home in Los Angeles to Joe’s Pub in New York this Saturday and Sunday to present Justin Sayre Makes the Case for America: A Love-In To Get You Through, in which he sets aside his usual pontificating stage persona to get down and democratic with his audience in an evening of interactive theater pieces.

INTO sat down with Sayre to talk about his show, his home, and upcoming projects. 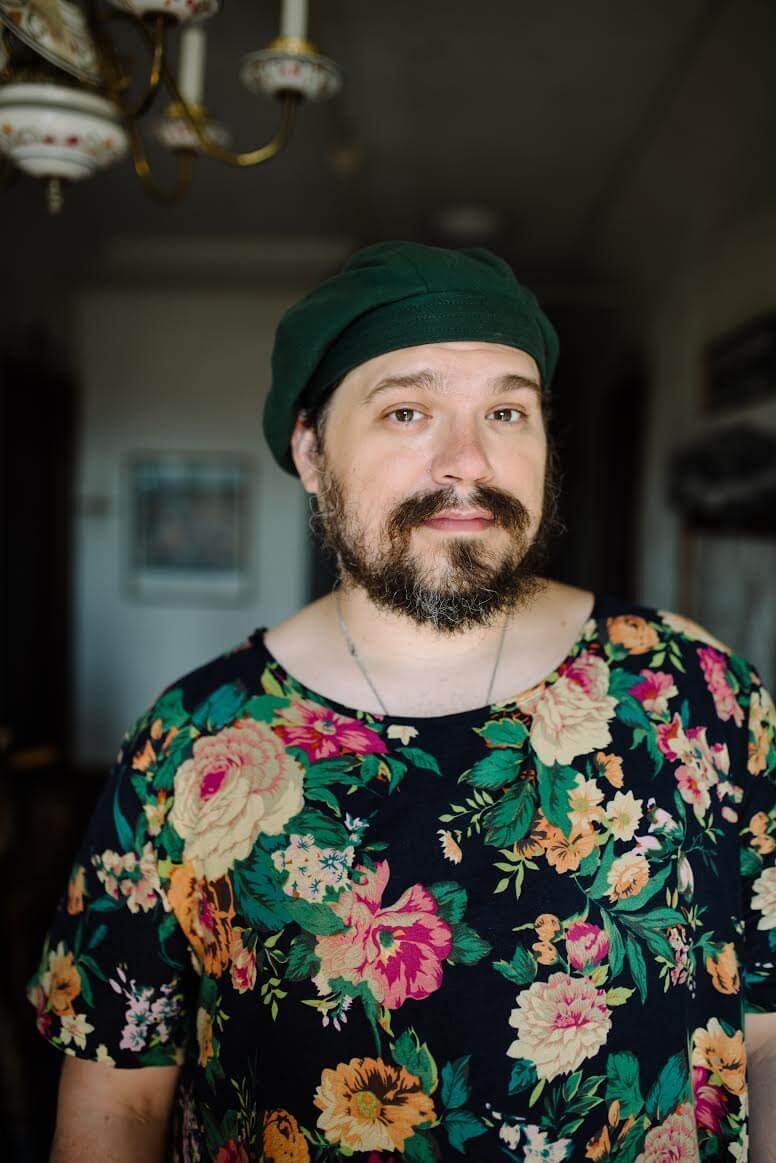 What is Justin Sayre Makes the Case for America?

They’re kind of interactive theater pieces — not really a cabaret show — that are based on this tradition that I started in my house where, on Tuesday nights, I make fried chicken and I philosophize. I also get stoned, but I will not be stoned during the performance. [laughs]

So we’re setting up Joe’s as my apartment. We’re going to recreate this moment of kind of philosophizing with the audience about what this experiment, called America, is. And, as with my philosophy nights here at my apartment, well, everybody gets a piece of fried chicken at a certain point in the show. [chuckles]

And hopefully, we have a lot of laughs and catharsis. In the beginning of the show, I say that “You’re allowed to feel anything you want to feel tonight,” and try to make space for the audience to do just that. So it’s an experiment, and it’s certainly a departure from what I’m usually doing, but I think it could be something really great. I’m very excited about it.

My apartment’s very eclectic, and there’s lots of different pieces: There’s a big picture of Edie Beale on the wall, and lots of little tchotchkes of writers, et cetera. I grew up Catholic, so I like kind of saint-like ephemera, whether they’re actual saints or not. [chuckles] But it’s also like this gay little wonderland and artist’s retreat that I’ve created, which I really like.

Why set it at your home?

I think because of the subject matter, and, I think, [to make] space for people to understand. I do a thing in the beginning of the show where I ask everybody to look around and see if they reasonably could give every person in the room the benefit of their doubt, to see that they’re just trying to do their best, as you are, and to increase empathy in the beginning, so that if things should arise, if people should feel their feelings or do whatever they need to do, that we can make space for that and not immediately rush to judgment on them.

And I think that, in this continually polarizing time, I think it’s really important for us to start— not that we have to apologize for people’s disinformation or anything like that, but to really make space for each other to say, “OK, well, if we’re all gonna do this together, we’re all gonna have to make certain agreements about what we’re allowing and what we’re not.” So it’s kind of like a little microcosm of what democracy is, and I felt like incorporating the audience and using the audience as a piece of it was really important to what the show was about.

How does your intention to “make space” interact with the national “Should we allow Nazis on Twitter” conversation?

Well, I think that when I talk about it, I make [a point] of looking around the room and saying, “Can you make space for everybody here?” I think that that, in itself, in a way, is an anti-Nazi action. Because whether you’re a Nazi or prescribe to any kind of fascist mentality, you’re saying that one group of people is superior and deserves more rights than another. So if you can’t look around the room and say, “I can give every single person — just in this room — space,” then the show’s not for you.

In The Meeting, you set yourself and the audience in a sort of teacher-student, or pastor-congregation, relationship, and it sounds like this evening will show you on very different terms.

I felt like doing a show where I just went on stage and kind of lectured people about everything that’s going wrong, or even made the case with them to say, “Here’s how we fix it,” it felt like preaching to the choir. I know that a majority of people who are going to see my shows are are liberals, if not full socialists. Definitely “the left.” I doubt I’m going to get a lot of right-wing folks, though they’re certainly welcome. But I felt as though I was more interested in an emotional moment with people, and more interested in having an experience that we could share together rather than me being a teacher and them kind of being a pupil for an hour and a half.

I like a conference of ideas. I like those big conversations where you’re trying to figure it out. I like those moments where we’re really trying to push each other to think in a different way.

Just as a side note, I’m reading this book by Eric Bentley, [who] I haven’t read and who’s so brilliant. But he was talking about the legacy of Voltaire, which we don’t really ever talk about. But it was so fascinating. I love that kind of stuff where it just makes you go off in another direction a little bit and say, “Oh, wow! How are you making the connections?” So I feel like, if I can do that for an audience and kind of make them go on a winding path with me, even though I’ll be doing a lot of the talking, I am asking them and hoping that they will take the ride with me to ask big questions of themselves. 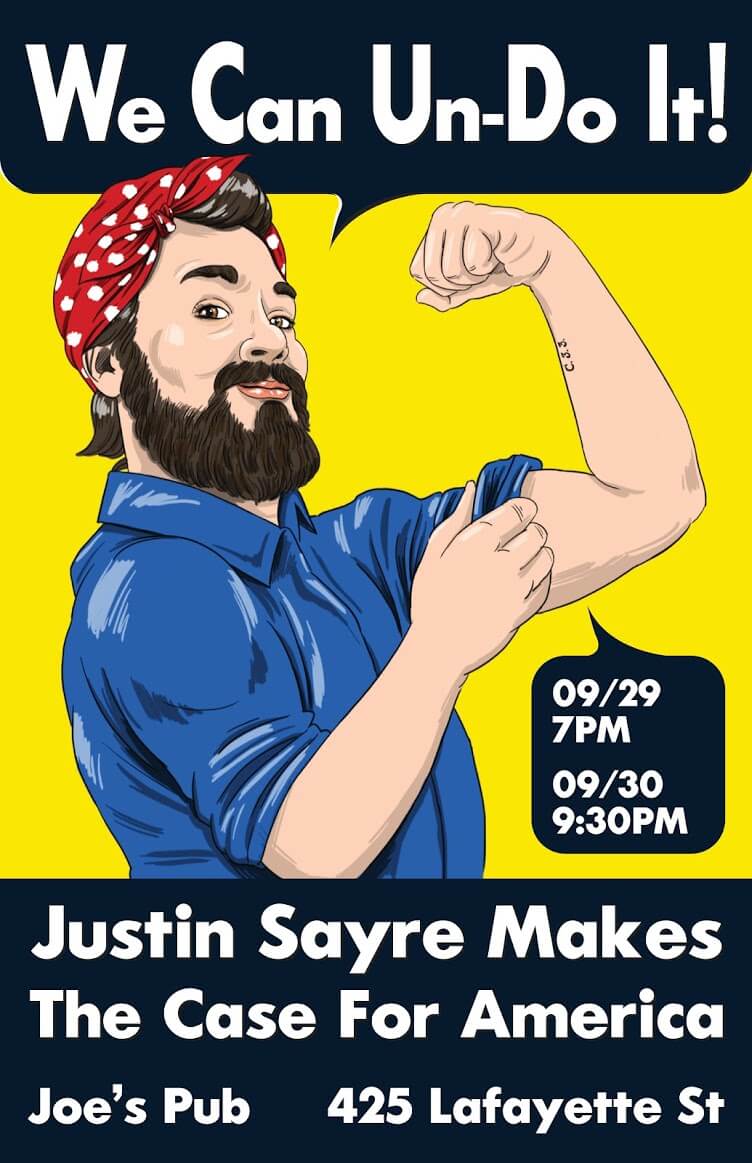 You only started writing books and screenplays a few years ago. What was the path for you there from The Meeting?

I’d written a play or two in college, but I’d never really taken myself seriously as a writer. And having that constant “I have to come up with a whole new show every month”  forced me into a real diligence about writing. And then just things came out of it. My book deal came out of being at an event and being funny reading gay mad libs. And I got involved writing for television because Michael Patrick King saw a clip from my show and thought I was funny. And it just kind of led from there.

And I think the thing for me as an artist, even back in the day when I was just doing and kind of on an acting track, I always wanted to make my own things. I always wanted to make theater rather than just participate in it as one cog in a machine. So once it really started that I could make it all, that really took off for me and just really changed the game, and I think, in a much better way. I’m much happier making the kind of work I’m making than I think I would have been, waiting for the phone call if you got a job or not.

What else is coming up?

I just finished my third YA novel, which will be out next spring. And that is third in the series that I did for Penguin Random House, which started out with Husky and then followed up with Pretty. So the third one, Mean, will be out next year.

And then I’m working on the gAy-B-C’s as an illustrated guide to queer culture, which is daunting as it sounds.

When I come back in November, I’ll be debuting a new solo show, a short story that I’ll be doing in Philadelphia and New York and San Francisco in November. I’m working on two projects for television right now that I can’t quite talk about, but that’s also in the works. And other than that I’m going to I’m starting my first adult novel in December.

Next year we’re doing a project that’s called Ravenswood Manor, which is a serialized theater experience. It’s kind of a camp horror soap opera, loosely, kind of like a Dark Shadows-esque comic farce, where we have six actors and they each play a male and a female role. So that will be out next year, and probably coming to Los Angeles first, and then hopefully coming to New York.

And then I’m starting a project with the photographer Matthew Placek where we’re going to go around and talk to survivors of the AIDS crisis, about someone they lost, and put it together in a book of photos and stories that just talks about who the person was, not about the disease, but how they met or a funny anecdote about somebody that they cared deeply about.

Justin Sayre Makes the Case for America plays Joe’s Pub on Saturday, September 29th at 7pm and Sunday, September 30th at 9:30pm — see joespub.com for more details. More on Justin can be found on his website, justinsayre.com.