Susanna Fogel is giving audiences something that they’ve long been complaining about wanting: more lady spy movies. We got a great one with Melissa McCarthy in Spy and people have long been wanting a female James Bond. So thankfully, Fogel is satiating us with The Spy Who Dumped Me–a spy movie in the vein of a buddy comedy about two women who get stuck in a very, very bad situation.

The film stars Mila Kunis as Audrey, an aimless thirtysomething in Los Angeles who is dumped by her long-time boyfriend (Justin Theroux) and is really going through it until she and her best friend Morgan (Kate McKinnon) are pretty much forced into becoming pseudo-spies. Why, you ask? Because Audrey’s ex is an international spy, of course. Hijinks, action, and romance occur and with Fogel’s touch, the center of the film always is about Audrey and Morgan’s friendship and what happens when two women find their calling in life.

INTO sat down with Kunis and McKinnon to discuss being underestimated, what they’d want from a sequel and Gillian Anderson. 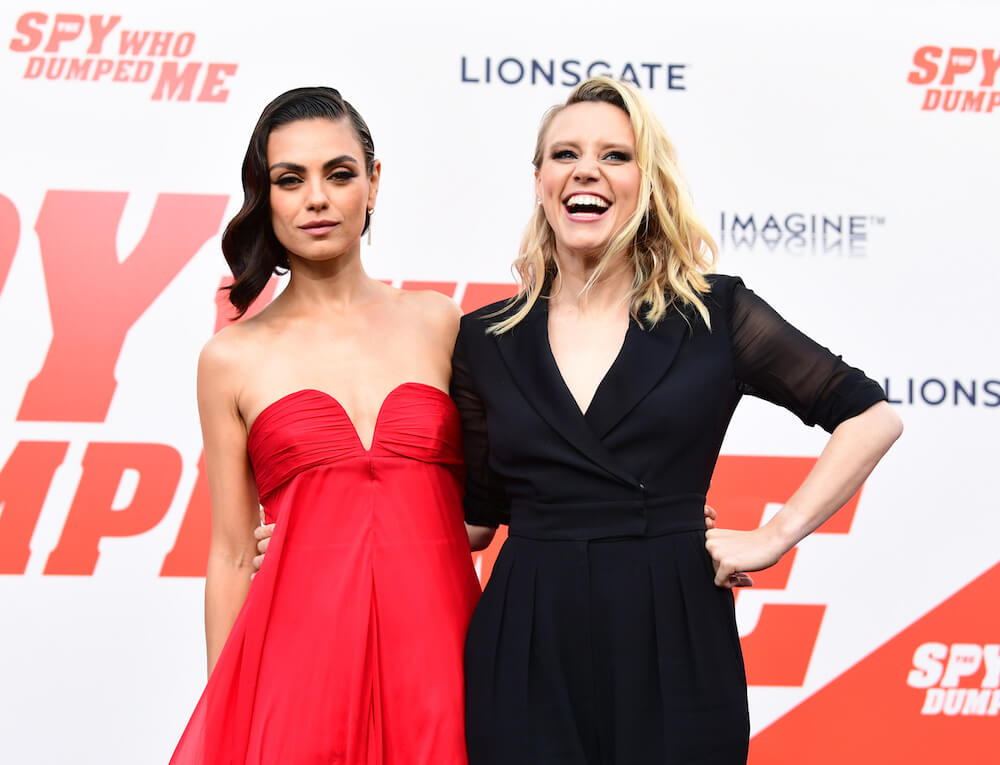 People are so thirsty for lady spy movies. Was that was one of the reasons you both got onboard with Susanna [Fogel] for this movie?

Mila Kunis: I wanted to do it because I’m a huge fan of Kate and the script was fucking awesome.

Kate McKinnon: The same, but for Mila. Sorry. You’ve caught us at the end of the day. Just give me a hot second.

MK: Where are you going with this idea? I’ll try to help you. Let me read your mind. Women. Film. Susanna.

KM: What really got me about this is that… usually, in a buddy movie, there’s a scene on page 75 where they have a huge fight and they break up. And then they come back together. And this one didn’t have any of that. They just were supporting each other, going along this journey together the entire time. I thought that was more true of my friendships and the way they function than anything I’d ever read.

Did the action part of the film appeal to both of you as well?

MK: Action, in respect to the fact that she and I didn’t have to be great at anything, yesssss. It just was like: you show up, and what would you really do in this circumstance?

One of my favorite parts of the film is that so much of it is about being a woman and being underestimated. How did you guys feel about that? When was a period in your lives when you were like, “I’ve been underestimated and I’ve now proven you all wrong”?

MK: My career was built off of that. But in the best way possible!  Ask any female actress: have you ever been told you can’t do something and then gone, wait a minute, yes I can.

Was that something you talked with Susanna [Fogel] about?

KM: I was called on to prove myself when I was hired as an umpire for little league baseball when I was 18. Yes, this is a true story. I could tell that the parents thought, she can’t. She’s not going to be able to do this. And they were right. I made bad calls, I didn’t brush up on the rules of softball before I did it, I pissed everybody off. I learned from that [laughs].

MK: Did you really not know the rules?

KM: I knew the rules. I just sort of didn’t brush up on it. And it’s hard! You have two sides of parents diametrically opposed, yelling at you no matter which way you call it.

KM: No! I mean, you can imagine a box, did it go outside the box? I don’t know. Do I like the look of the child who’s come up to bat? Does it look like a nice person? Well, okay. That’s how I made my calls. Do I want to reward this person or not?

MK: Are you serious? 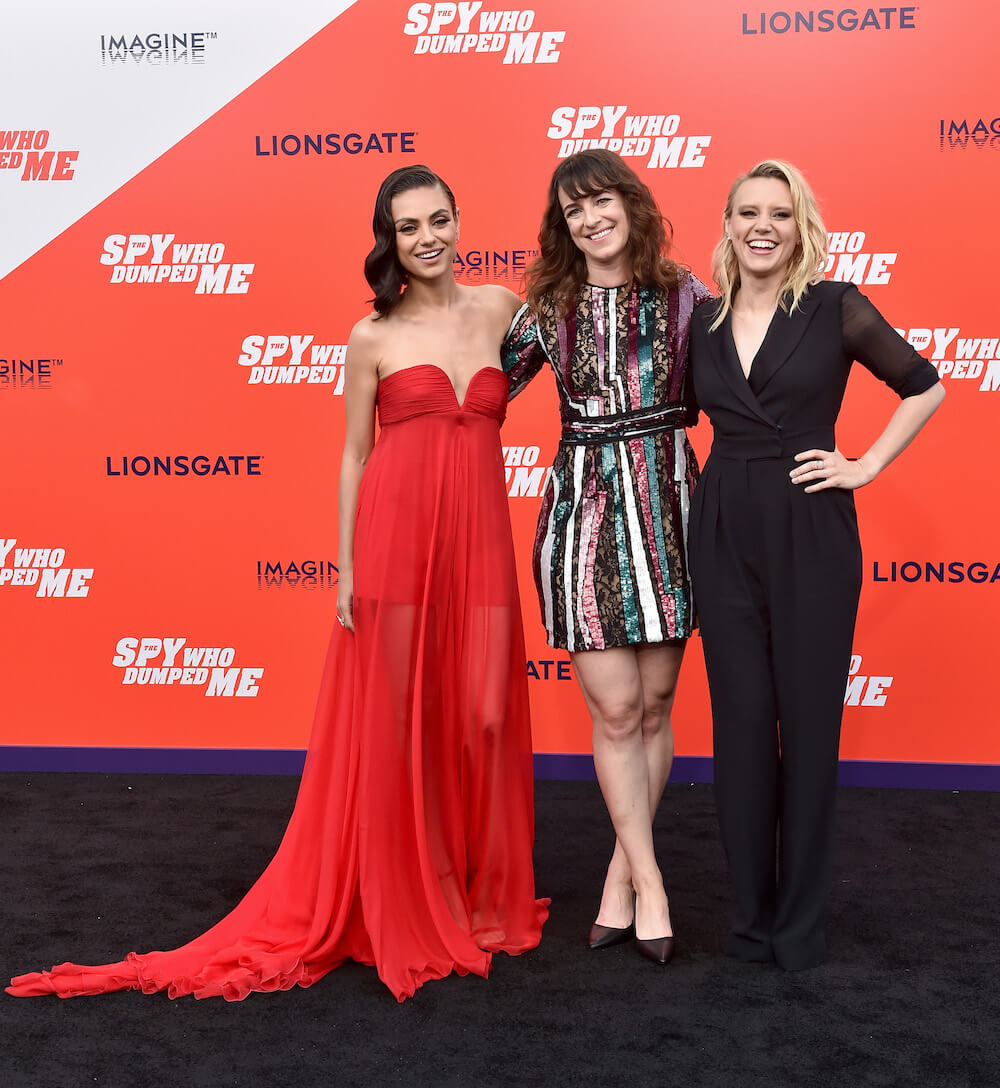 Is this the dynamic you guys had on set the whole time? Just riffing off of each other?

One of my favorite parts of the movie was all the very lady-centric jokes. Were any of those off the cuff or were they pretty scripted? Like, the toxic shock syndrome joke killed me.

KM: Yeah! That was a tentpole of the script. There were so many good jokes in the script. We improvised some as well, and some of them made it in. It was so fun. But the script was like… POA–I’m gonna coin a term–perfect on arrival. [screams] It’s not good! It doesn’t even rhyme with “dead.” It should rhyme with “dead.”

You were in Life Partners, right?

KM: I had a small but pivotal role in a half-scene of Life Partners, the independent film that she made. I was like, how is this very, very grounded, heartfelt, sardonic tone going to mesh with a huge action movie, and gosh if she did it! Seamlessly! And it just fits together!

Did you guys do any of your own stunts?

MK: I mean, I think we did, literally we crawled all over the floor, we got shit sprayed on top of us…

KM: Oh, we crawled, oh yeah! I remember that!

What would you guys hope for in a sequel? I definitely would love a sequel.

MK: What do you want to happen in the sequel?

You guys are now total badass spies. I want to watch that movie.

MK: I say Greece. She keeps trying to push Southeast Asia. I want to do Greece. I want the Mediterranean, warm water.

Who would your ideal villain be for a sequel?

KM: The leader of Myanmar. Right? Shouldn’t we get embroiled in a scandal at the Myanmar parliament?

Did you guys actually freak out about working with Gillian Anderson, because that scene when you call her the Beyonce of the government…

MK: Let me answer that question for you. Let me just take this one.

KM: Can I speak for myself, please? As a lifelong insane X-Files fan and fan of Gillian Anderson, it ripped my universe in half.

KM: Come on! Let me speak for myself. When you were 14, you had already been working in the industry for 10 years. But when I was 14, a massive, insane fan of the X-Files, you don’t think: one day, surely, I shall film a scene with this person on screen. So, that was really crazy.

That Gillian Anderson scene, I think, is going to speak to a lot of people, because I definitely was like, oh that would be me over Gillian Anderson, who also seems frighteningly beautiful.

MK: This one… All day long I had to hear about Gillian Anderson… [laughs]

There was one point, I was like, are they going to get together in this movie? I was really excited. Maybe that will happen in the sequel?

KM: [whispering] Shut up. It was very professional. Everything with Gillian, above the table.