Katy Perry marked the 10 year anniversary of her breakout single ‘I Kissed a Girl’ on Saturday by meeting none other than the leader of the Catholic church: Pope Francis.

The pop star was preparing to speak at an international conference in Vatican City focusing on finding the cure for cancer alongside her boyfriend Orlando Bloom when the religious leader approached her before taking the stage.

While the meeting was reportedly a surprise for the pop star, the symbolism around the anniversary of her queer anthem and the meeting with a major figure who has recently helped change the ways in which Catholics engage with LGBTQ communities ironic to say the least. 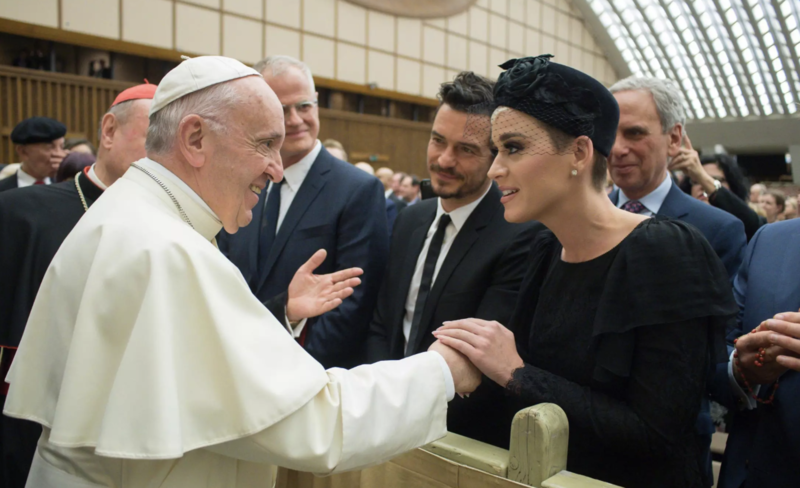 When her song that arguable made her a household namewas released, it caused global controversy from many communities. Many either didn’t agree with her liberal discussions on sexual exploration or felt that she was encouraging behaviors that many — including the Catholic church — felt were immoral.

Last year, Perry spoke about this time after accepting an LGBTQ leadership award from the Human Rights Campaign about how the song was incredible personal to her own identity.

“What I did know is that I was curious, and even then, I knew sexuality wasn’t as black and white as this dress,” Perry said. “And honestly, I haven’t gotten all of it right, but in 2008, when that song came out, I knew that I had started a conversation that a lot of the world seemed curious enough to sing along to.”

Earlier this week, INTO spoke with Perry’s manager about an interview around this anniversary and were told she would not be making a comment about this day at the time.

INTO has reached out to the Vatican for comment on the significance of this meeting and will update here if they respond.