Twenty-five years ago, k.d. lang became America’s unlikely It Girl. With her short, brown coif highlighting her cut jawline, and her penchant for blazers and men’s button-downs vs. blouses or little black dresses, her unapologetic masculine demeanor was a new kind of sight to behold for most of middle America. Her album, Ingenue, sold millions and won a handful of awards; she shared a scandalous cover of Vanity Fair with Cindy Crawford; and palled around with Madonna, who once said of the androgynous crooner, “Elvis is aliveand she is beautiful!”

To celebrate the anniversary of her pivotal LP, lang is heading out on a 2018 Ingenue Redux tour where she will perform every song from the album that included her hit song “Constant Craving.”

Before k.d. lang became a household name, there were only few depictions of androgynous women in popular culture, and most of them were young, scrappy tomboys. Queer film historian Jenni Olson once noted, “When I was little, I could recognize myself in the faces and screen characters of Tatum O’Neal, Jodie Foster, and Kristy McNichol. As a young butch dyke coming out in 1986, I looked for their grown-up counterparts. I couldn’t find anything. My trio of tomboy heroes hadn’t turned out like I had. Instead, I turned to Marlon Brando and James Dean as my models of butchness.”

Before lang’s hey day 1993, the tiny amount of representation of more masculine women were either athletes like Martina Navratilova, thinly-veiled gay characters like Vasquez in the 1986 film Aliens, or villains in early lesbian punishment films like The Killing of Sister George. There was something very specific and enticing about lang’s masculine-of-center look that accompanied Ingenue, an aesthetic quite different from her ambiguous country western persona she’d professed and performed up until her “coming out,” both as a lesbian and a vocalist moving away from the country genre and into a more contemporary soft rock sound. (“I’m the Tom Jones of lesbians,” lang once joked.) 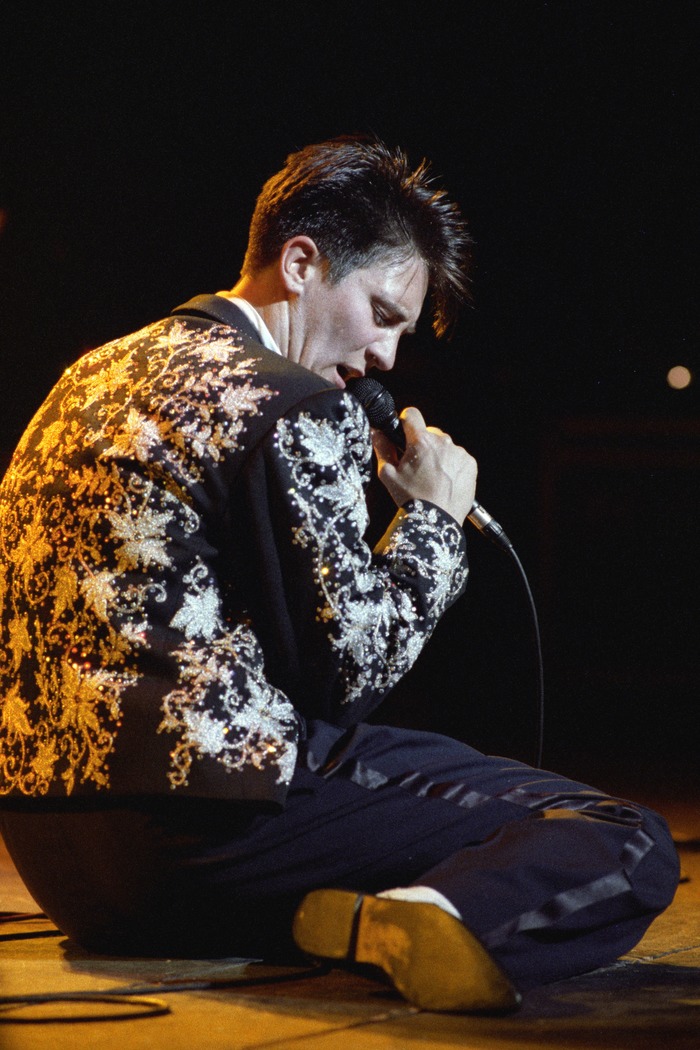 One year after the release of Ingenuewhich was nominated for six Grammys and was certified 2× Platinum in both Canada and the United Stateslang appeared on the famous aforementioned cover of Vanity Fair, wearing a vest and a tie, and getting a shave from the time’s most beloved supermodel Cindy Crawford. Inside it was even more racy, with Crawford posed on top of lang, their lips mere inches from one another, lang’s hands on the tiny interim between Crawford’s bare thigh and ass. “She bends gender cliches, seducing audiences with each breathtaking performance,” Vanity Fair writes.

Soon after, fashion embraced the idea of women not just borrowing their boyfriend’s jeans but buying their own pair, putting Jenny Shimizu front and center in an ad for Calvin Klein’s unisex fragrance CK One. And two and a half decades later, that reverberation can be seen more than ever, from Kristen Stewart’s off-duty daytime streetwear to Ruby Rose’s magic ability to christen heterosexual women a little bit gayer (by their own proclamations). A 2009 T magazine profile of Rachel Maddow (“Butch Fatale”) credited lang for becoming the ultimate lesbian chic icon, the kind of icon that was necessary for Maddow and others like her (though still limited in mainstream visibility) to exist.

The growing appeal of television characters like Brienne of Tarth and Lena Waithe’s studly Denise on Master of None; or the saliva-inducing style of soccer star Abby Wambach; or success of Alison Bechdel’s on-stage baby dyke butch exploration in Fun Home, can all be credited to lang’s herstoric handsomeness which was recognized on an international scale. Even “soft butches” like Shane of The L Word, Tig Notaro, or the countless number of gender-straddling models like Erika Linder and Tamy Glauser can give lang some credit for proving female masculinity is not only possible and palatable, but incredibly pleasing.

lang’s embracing of her butch bravado made her an icon, as she was the first major celebrity woman to not just come out, but also inspire the age of lesbian chic that would follow. In fact, New York magazine put her on the cover with those exact words in 1993. A letter to the editor in the following issue featured a note from a reader (“name withheld”) proclaiming, “I am a purely heterosexual woman, but if I ever switched, I would go for lang in a minute.” She made it possible to be an out lesbian, but a handsome woman. She was desired and desirable, in both appearance and in her music. Her on stage persona is just as sexualized as contemporaries (and rumored exes) like Madonna, but in an entirely different way. 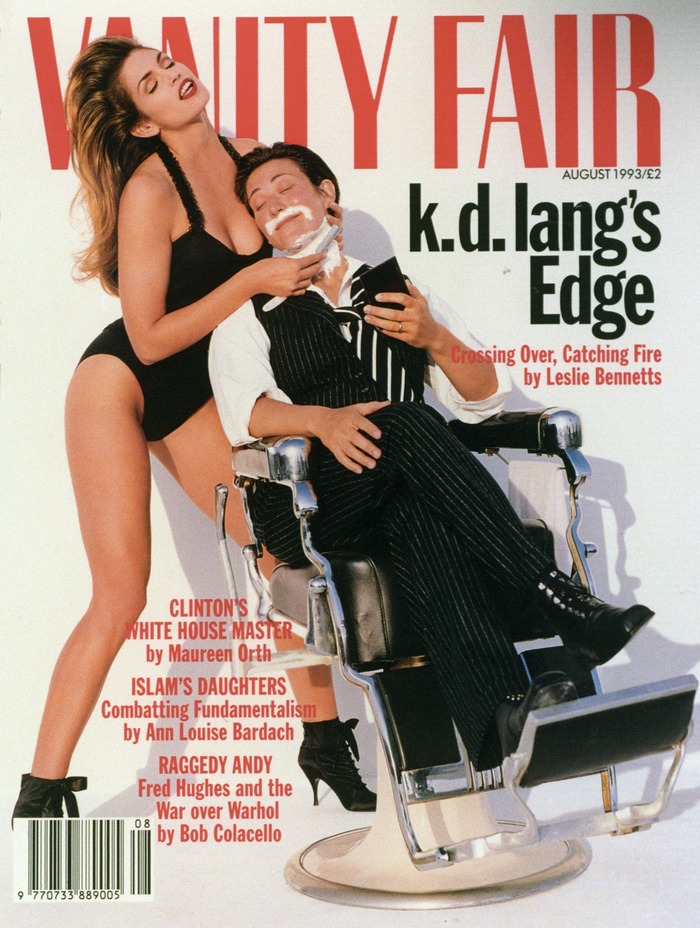 The media covered the mysterious enigma of lang’s new look in its early days, with the Village Voice saying “What makes girls in the real world go crazy is lang’s self-consciousness, an awareness of the tropes she’s manipulating that suggests she could, at any minute, say the words we long to hear.” Arlene Stein called her “the butchiest entertainer since Gladys Bentley,” and comparisons to Elvis continued, as well as a reviewer writing, “she looked, depending on the night, like Stompin’ Tom Connors or Buddy Holly on a cross-dressing spree.”

lang’s looks were detailed and commented on just as muchif not morethan her talent, but this was different than wen women artists are detailed by looks first and ability second. It was an indication that a woman who did not dress to appeal to the male gaze could, in fact, be successful on her own terms. She could subvert the norm and make it look sexy AF, committing fully to a gender nonconforming presentation, one that made women swoon and possibly even question their sexuality. That kind of sway hadn’t been so readily available from a public figure in mainstream pop culture until lang became a household name, much of which had to do with the fact that she was a newly minted lesbian icon, of which there were so few at the time.

With a saunter and a wink to accompany her serenades, every woman in the audience feels like lang is singing just for themand that’s the kind of power most people (of any gender identity) would be envious of.

The 25th anniversary remastered edition of Ingenue is now available from Nonesuch Records. You can buy tickets to the Ingenue Redux tour at kdlang.com